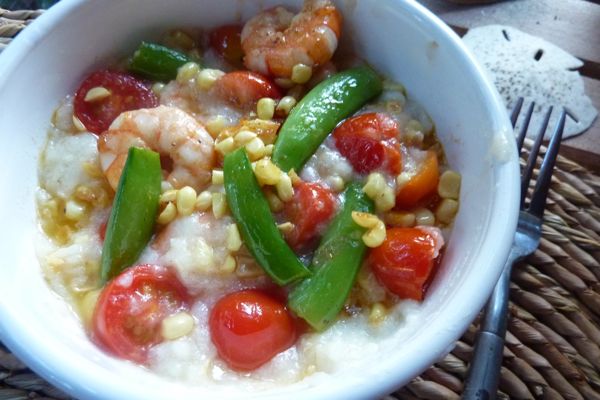 Greetings from South Carolina! I know…Grits!…I’m so predictable. So New-Yorker-trying-to-be-a-Southerner! Well, yes. The thing is — you should know this about me — I’m so helplessly impressionable. Remember about eight years ago when brown was the new black? Or I should say, when brown paired with any other color — pink, green, light blue — was the new black? Those combinations were all I wore for an entire year. When my friend Jim was cooking for me while dancing to Graham Parker’s “Hold Back the Night,” I cooked and danced to that song in my own kitchen for my next three dinner parties. And so whenever I cross the Mason-Dixon line, which I do at least a few times a year, it is absolutely a non-negotiable requirement for me to make grits. And I don’t feel as spineless as I usually do about it because I think this particular brand of impresionable-ness falls under the very forgiving category of “When in Rome.”

It seriously never occurs to me to eat grits any other time the rest of the year, even though there is in fact a shrimp and grits recipe in Time for Dinner, and even though the girls (and Andy) have been coming to South Carolina their entire lives — Phoebe’s first trip was when she was 3 months old; Abby’s when she was 6 weeks. Tonight, we tossed in some sweet, plump shrimp (the shrimp down here deserves a different shellfish category altogether, btw) some fresh summer vegetables and had ourselves a Lowcountry Lovefest.

Shrimp & Grits and Then Some
The grits I bought didn’t call for stirring, but you should check the package instructions before you follow suit. You could also use instant grits.

Make grits: Bring 3 cups of water to a boil. Stir in 1 cup white stone ground grits, lower to a simmer, cover and cook for 20 minutes. When it’s ready, stir in butter and salt to taste. (Sort of like mashed potatoes — the more fat you add, the better it will taste, of course. But you really don’t need more than one pat.)

While grits are cooking, saute 1/2 small shallot and the kernels from one ear of corn in a skillet with 1 pat of butter and  a bit of a neutral oil. Add red pepper flakes if your kids can handle it. Cook on medium heat until corn looks kind of crispy and brown. Push to the side of the skillet and add a big handful of fresh summery cherry tomatoes (halved), and a big handful of fresh summery sugar snap peas (trimmed…or not). After about 2 minutes, add a bit more butter, turn heat up a bit, and add about 3/4 pound peeled shrimp (bonus for Carolina shrimp) and cook about 1 minute a side. once cooked, stir in with the rest of the vegetables.

Spoon the grits into four bowls. Add the shrimp and vegetable mixture on top. Garnish with basil or thyme if you have it. I didn’t have either and it was still stupendous.

Grits have always stumped me in terms of cooking, either I haven’t been looking hard enough or they just aren’t as popular here on the west coast – we use polenta a lot which, to me, being a west coast girl, seems like a yellow version of grits. I ate grits once in New Orleans and thought they were delicious (dripping butter at the Camellia Grill – oh, how I love that place) , but I think I’ll stick with polenta. 🙂

And you are right, the seafood in the Carolina’s deserves its own special category, because my god those shrimp are so rich, so decadent, so buttery that they make ours looks like brine shrimp.

To think I see you almost every day during the year and I did not know about DALS. I must start asking more questions! What a great blog and I loved the Times article. I shall place my book order now… 🙂

I must confess I’ve never tried grits before. But I want to now. And with the shrimp they look delicious!

As I was reading down your blog posts, I kept thinking, “That looks like SC” (your vacy photos). And sure enough, here you are!
The world at large that hasn’t had shrimp and grits has no idea what a mighty-delicious-meal they are missing! I started making them about 15 years ago from a recipe in Charleston Receipts (yes, receipts) and have never looked back! So glad to hear you ‘preciate ‘dem shimp n grits!

Yum! Shrimp & Grits! I’m a Florida baby born & raised. I’ve been eating grits for as long as I can remember!

We just had shrimp & grits a few nights ago. We eat them seperately, but I’m sure they are just as good mixed together! i just boil the shrimp for a few minutes. We eat cheese grits.. which just consists of grits and velveeta cheese. YUM!

Shrimp has been a staple in our house this summer! I think I could eat my weight in shrimp.. It actually for dinner tonight; Shrimp, scallops & linguini noodles. (We went scalloping yesterday and my husband shucked them so we could have them for dinner tonight!)

This was really and truly exceptional.