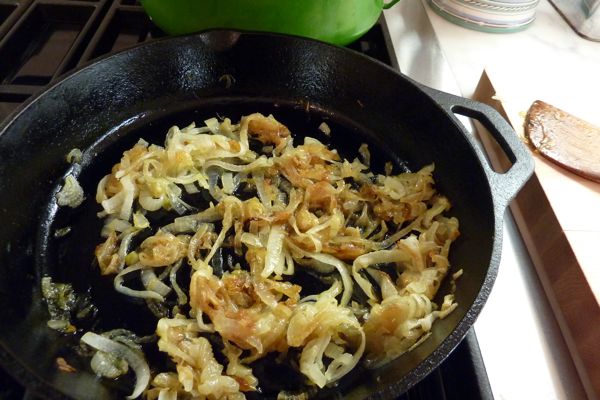 Over the years, I’m sure my mother has told me a lot of stories about Joan, her best friend from college – who I’ve only met a handful of times – but there’s only one that has stuck with me and that I think about almost on a nightly basis. It’s the onion trick story.

When Joan first got married she was expected to cook. Which would’ve been fine except for one problem – she hated to cook. And because this was forty-five years ago, before women actively, purposefully embraced the role of not cooking, she was routinely figuring out ways to pretend she was cooking so her husband wouldn’t be disappointed by her complete apathy (antipathy?) towards the kitchen. This is why she started chucking an onion in a 350°F oven an hour before he came home from work. Even if she had no use for that onion in the meal she would ultimately make and eat, she felt better knowing her husband was walking into a house permeated by the smell that signaled stews and soups, roasts and braises — meals that require clocking some serious hours in the kitchen. I never did find out what happened at dinnertime, when she’d serve him something that was more likely inspired by Peg Bracken or a pouch of Lipton Onion Soup mix.

I love this story so much and have been known to employ Joan’s onion trick at holiday parties that are 100% outsourced. (Is there anything more depressing than showing up to a party and not smelling the food?) I’m also proud to say that I’ve also come up with my very own onion trick over the years, albeit one a little more practical. It goes like this:

When I have no idea what to make for dinner, I start caramelizing an onion and then assume a plan is going to fall into place.

Cause when you cook onion slices over low heat in olive oil for even just 15 minutes, you not only have a delicious, happy aroma wafting through the house, you have the start of something special for dinner. The onions, which get all silky and candy-sweet, can be shoved inside an omelet, heaped on top of pasta with cheese, sandwiched inside a California-style turkey burger.  And they can be just the thing to prevent a baked potato dinner from feeling like a trip to the Roy Roger’s fixin’s bar, as outlined in the latest issue of Bon Appetit. 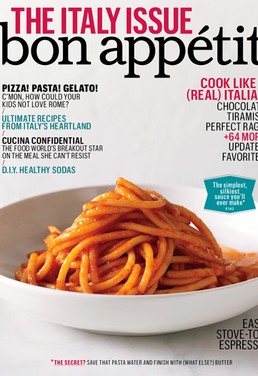 About that Bon Appetit! If you follow the food world at all — you know, in all your spare time — you might know that there’s all kinds of exciting things happening at the storied magazine for food lovers. There’s a new editor, a new look, and a new column called “The Providers” (!!!) written by Andy and me. I love a lot of things about the direction Bon App is headed, but what I love most is the re-commitment to helping home cooks like me and you figure out how to do everything a little better. In this new issue you will learn lots of new tricks: how to make perfect pasta (who knew how many things I was doing wrong??), how to make Eric Ripert’s hollandaise sauce in a blender, and how to master those caramelized onions. (Check out page 79!) I hope you — and my pal Joan — will pick up a copy today.

Oh, I’m so glad to hear that Bon Appetit is making some changes. I was a subscriber for years and years but gave it up a while back because it just felt like it had gotten too rarified, full of needlessly complicated recipes that, in many cases hadn’t been adequately tested. Granted, I’d also acquired a couple of small people at that point, who didn’t appreciate the charms of a twelve-step dinner that wasn’t ready until 10 p.m. So it wasn’t all B.A.’s fault. Looking forward to checking out the changes, as well as reading your column. Very exciting! Congrats!

I second Tara’s remarks! As a former dedicated Bon Appetit subscriber from my college days, I finally gave up on the magazine after my son was born. When was I going to find time to embark on a 3 day epic long recipe with 36 ingredients, 9 of which had to be ordered online. Forget it. I will definitely pick up a copy and check it out. Congrats on getting a column in there, that makes B.A. even more appealing as it will to speak to those of us that have more than our own mouths to feed.

That is a funny trick – I’m not sure I’d use that particular one though, because one of the things that annoys me most about my kitchen is that if I cook anything involving onions (which is roughly 85% of meals) then my entire house smells like them for about 2 days. I think it has to do with the location of the kitchen in the house, and that it has poor ventilation. The only exception to this rule is the 4 weeks out of the year that the temperature outside is between 65-75 so I can open the windows a few hours a day.

It’s a sneaky trick though, and I might have to use it as inspiration to come up with my own variation!

Thanks, Jenny – You just helped me figure out how to spruce up the baked potato dinner I was planning. And congrats on the B.A. gig. I will definitely pick up a copy.

Onion smell doesn’t bother me, but day old bacon aroma does. I have tried this Good Housekeeping trick: Place a small bowl of white vinegar next to the stove when cooking smelly food – it helps to reduce lingering odors. It works.

That is hilarious. Congratulations on Bon Appetit. I will definately check it out!

Great news about Bon Appetit — congrats on the new column! And I guess I’m a little bit in love with Joan.

That’s huge! I will be buying, and cooking… Love your recipes.

I love to cook, but I’m still in love with the ‘onion trick’ – what a fabulous idea! As for Bon Appetit, so excited you guys are in it! I just got my issue yesterday and I’m really looking forward to all the changes!

I love the onion trick Jen, going to use it! So excited about your new column in BA and the book, congrats!!!

So exciting! This may be the first time I pick up a copy of a magazine with your byline where I don’t read the article thinking it sounds vaguely familiar only to realize afterward that you wrote it! Congrats to you both!

Great news about the column! I was excited to hear that changes were in store for Bon Appetit, the photography and layout is so much more appealing and well now with your contribution, the content is much improved! Congrats to both of you.

Thanks to everyone for the nice feedback. I’m helping out with the June issue now and it’s crazy how badly I want summer to be here. You won’t believe how good everything looks.

Congrats on the column! I haven’t been reading BA for a while–I echo Tara’s sentiments completely–but I’m definitely going to check out the next couple issues. I can hardly wait…the May issue hasn’t hit the stores yet up here in Ontario.

Thanks for this post–I can’t tell you how many different people have passed on the onion trick to me, usually women who are now in their 50s and 60s (and older?). When I got married, my mom passed on my grandmother’s trick, which was to always set the table first. That way, when grandpa came in from the field (Iowa farmer) it “looked” like dinner was imminent, even if it actually took longer. I’ve used that one more than once in my own house.

This post made me giggle. 🙂 It doesn’t matter if my meal is only made up of five ingredients, if my hubby hears and smells the onions start to cook he is immediately hungry! 🙂

I heard about the onion trick from our church’s children’s pastor at my wedding shower – only her version had a twist. She calmly stood up, in her dress and gray hair, and added that it’s best if you meet your husband at the door wearing nothing if you do the onion trick. Because then he’ll forget all about dinner anyway.

I was a loooong-time suscriber to BA, but stopped about 5 or so years ago. Just renewed yesterday after reading your news, and looking forward to checking it out!

Also, I made the pork shoulder ragu this past Sunday–OMG. I made a huge amount and my husband and I have had it 3 times this week–but we’re not complaining! Great stuff, thanks!

Ha! I thought I invented the onion trick (I first tried it when I ordered in Christmas dinner from a fancy hotel, then put it all in the oven in my pans) but am happy to know there are other clever pioneers before me.

Congrats on the Bon Appétit column!

I am so happy to hear that bout Bon Appetit! I JUST went to their site and subscribed!

Just read your piece “Text after Marriage” in my new issue of BA out load to my husband. Such a familiar exchange although ours usually takes place via a Skype video call about 20 mins before I leave office and he leaves basement office for kitchen. Found your blog as a result and now have it as a favorite. Looking forward to being a regular reader.

This is GENIUS!! I love onions and think this is so freakin clever!

Love it! Great idea for when you have catering!

Terrific idea! I’ve never heard of the “onion trick” but I love the idea of starting almost any dinner with a bit of caramelized onion. I might do this tonight and clean out the bits/ends of veggies while the stimulated by the smell.

Thank you for blogging. I know it how much time it takes, but I make at least one of your recipes each month and I appreciate your commitment to helping us all enjoy the Sharing of Ourselves that happens when we share a meal.

BA ,that is how I found you–the article was funny and checked your blog out right away–hilarious & tasty! Matt & I have 3 kidlets ages 5 & under and goodness, most days are interesting to say the least! We miss our foodie days! Well, maybe there is hope after all!! {love the way BA has changed!!}

I don’t cook anything (for dinner) without onions! I love how you said, “When I have no idea what to make for dinner, I start caramelizing an onion and then assume a plan is going to fall into place.” I do the same thing! Love this post!

Over from Bon Appetit – loved your article!

I loved this tip – my own mother hated cooking and was a big Peg Bracken fan but she never planned ahead enough to try the frying onions trick.
I once heard of frying onions being used as an alibi, too. In the 1970s I went to teach at a rural college (a College of Advanced Education, which was a new thing in Australia then), where a lot of mature age women in the town and surrounding farms were getting a first giddy taste of further education – and the sexual freedom that often goes with it. One woman, in her late forties, confessed to us one day that her secret was frying onions. She would rush home late from a liaison and throw chopped onions in a pan, and when her husband walked in a few minutes later he’d cry ‘That smells great! You must have been cooking all day.’