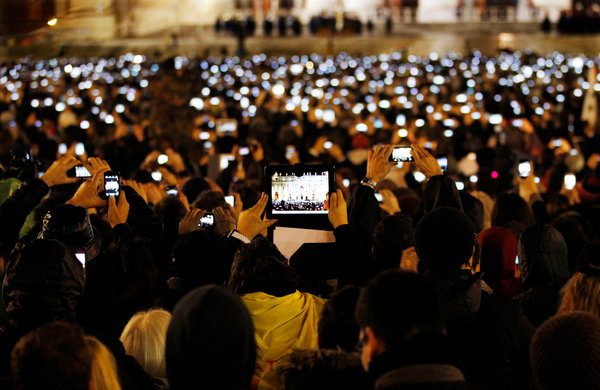 I can usually tell it’s June by all the sighing happening across social media. As in: “Final concert of elementary school. Sigh.” or “Last playgroup meeting of the year. Sigh.” or “Last game with this team. Sigh.” In a Facebook post about her son heading to middle school, my friend DeLauné didn’t bother with the sighing, instead going straight for the jugular: “Who knew raising a child had so many goddamn goodbyes in it?”

It’s understood that DeLauné and every other parent who gets emotional about moving on knows how blessed they are to even be attending The Last Concert or The Last Game or a party that celebrates The Last Day of Preschool. But it still doesn’t mean it’s easy. Especially when you have to attend events that involve young children singing. Is there anything sweeter? Anything that can rip your heart out faster?

But here’s a thought, brought to you by your favorite food-blogging denialist: At least this time of year, we are generally aware of all these Last Times and Goodbyes. At least we take the time to celebrate them. I think the only thing more emotional than, say, walking your kids to the bus stop for the last time after walking them to the bus stop every morning for seven freaking years, is not being aware that it’s the last time. Of not being in the moment to psychologically earmark it, to let it seep into the forever consciousness so that someday you can tell yourself “I never took that time for granted.” Because I think if somebody had told me it was the last time I was going to hit the local playground with my girls — whenever that day was, I can’t remember! — then maybe I wouldn’t get all weepy every time I drive by it and watch a new generation of parents push their toddlers on swings right next to where my daughters mastered their monkey bars.*

A little side story, bear with me here:

A few months ago, we took the kids to watch Jeremy Denk, premier concert pianist, director of a chamber orchestra called St. Martin in the Fields, and the author of an upcoming book, edited by yours truly, Mr. Dinner: A Love Story, Andy Ward. Denk and his group played four pieces, each with multiple movements, and the girls decided they like the one by Bach more than the one by Stravinsky, which, according to Phoebe sounded like the soundtrack to an action film. All in all, it was a lovely introduction to this kind of cultural event. I was glad I fought against all the excuses to leave the kids at home, glad I adhered my self-imposed rule of “When you have a chance to see someone who’s the best at something, even if you know nothing about that someone or what they do, you go.”

Anyway, right before the orchestra performed, the director of the program came on stage to introduce them. We were in for a real treat, he told us, before closing with the obligatory request not to record anything. Then he said something else I loved. “Turn off your cell phones. Give yourself over to the music,” he said. “Let it take you somewhere.”

This has probably been said to me (and to you) too many times to count, but for whatever reason, his words stayed with me way beyond the concert. I’ve been calling them up at every Last Event of the year: the seventh grade awards ceremony, the middle school band/choir/orchestra show, the cello recital, the piano recital, even the last soccer game of the season. Sometimes I get so caught up in recording things for the future that I forget to fully partake in the now. And the now is so amazingly awesome!

So a call to arms: Let’s put down the phones and fully give ourselves over to all this celebration and ceremony. Let’s let it take us somewhere, even though where it takes us can be tough to think too hard about. I’m sure our future selves will thank us.

(**Here, I’ll conveniently gloss over the slow mind-numbing that resulted from years of marathon swing sessions.)

PS: Stay tuned for information on the photo credit. I found this image a while ago and new I’d need it for something!

Another reason to turn off your device when attending any kind of concert- if the event audio is being recorded, incoming calls (even on silent!) can leave digital traces in the recording, potentially ruining the listening experience for those unable to attend in person.

Loved this post for so many reasons! I saw/heard Jeremy Denk a couple of months ago here in Indiana and he was tremendous. At the time he mentioned his memoir and I was intrigued. Now that I know that Mr. DALS himself edited it, I know it’s a must read. So great!

As my daughter moves swiftly through her first year, I have been making a deliberate effort to untether myself from my phone. While I, of course, want to capture all the precious moments, it is becoming more clear to me that I need to look at her with my eyes and heart, and not just through the screen of my iPhone. Wonderful reminder.

I SO feel that pull toward recording every moment for posterity, but have been trying to let it go. I find myself much happier when I just go with the flow and soak in the moments without fumbling for my phone or camera. Life’s too short!

On Thursday night my water broke and as we were leaving for the hospital, my husband reminded me to “give your ‘only child’ one last kiss” and then I cried. So true that the only thing sadder than these little endings would be letting them pass by unnoticed.

Now I’m crying Sarah. That is the sweetest moment, thank you for sharing. And I guess Congratulations are in order? Thanks for writing.

I remember years ago when I was leaving my wedding to get changed into my “going away dress” – my aunt pulled me aside to remind me to stop and take it all in. To feel the people and place and dress, because when I took the dress off and the day was over I would better remember if I intentionally captured it’s memory. I come back to that moment often, and it is without video or photo or audio. It is my memory.

Jenny, I love this reminder to stop and appreciate and experience the now!

Sarah, I just love that you stopped for just a moment to celebrate the present, future and past. I think sometimes we can get caught up in the future or past and miss out on the present. When life really is a collection of all three that make up who we are.

I loved this post. My daughter has been practicing ‘Somewhere Over the Rainbow’ for the past few weeks in preparation for her kindergarten “graduation” and I’m a weepy mess every single time I hear her sing even the first few lines. Where did the time go?!?
I’m all for putting our phones down during these special moments. I want to experience the moments as they happen and not just watch the video recordings after they’ve been uploaded to Facebook!

You should take your kids to Tanglewood. They’d love it.

I feel this same way about travelling – I am amazed at how many people I see in museums viewing artwork through their cell phone/tablet/camera, whatever! Put the electronics away and live in the moment!

I teach middle school choir, and I never really feel like the audience is THERE. They’re recording or texting or not paying attention because it’s not their kid… But how to help them be present? I have no idea.

It’s important to be still and take in our children’s milestones and family moments. Time flies too fast, be present in the NOW.

Very nice blog post. I absolutely love this site.
Keep it up!