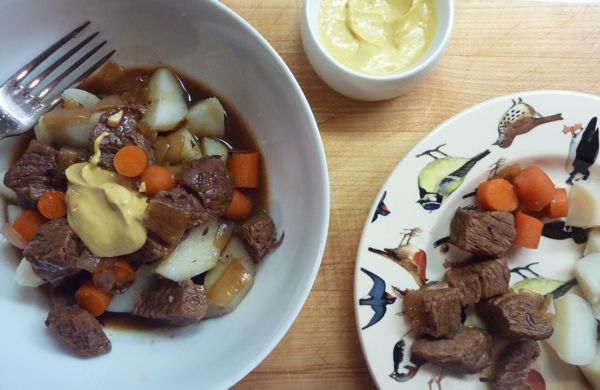 We’re not a winter family. Certain families, when the temperature drops below zero and the sky goes gray, just know how to get it done. They bundle properly. They have gear. They layer well, and have Thules on their cars and, in general, seem to be impervious to the elements. But us? We don’t do well in the cold. We’ve only gone skiing once, our ice-skating skills fall short of limited, and we’ve yet to find the magical combination of coat, gloves, and hats that will keep our less-than-hardy kids from whining about, as they like to say between (what I suspect are hammy) shivers, “turning into ice cubes.” Jenny wears my ratty old fleece and wool scarf inside the house pretty much from November through April, and not a day goes by when she doesn’t come down in the morning and announce — as though our house, on that particular morning, is any colder than any other winter morning in the last seven years – that, “Oh my god, it’s FREEZING IN HERE. Is the heat on?” So we tend to be inside a lot during the winter – loooooong days reading or puttering around, making fires, playing Monopoly, drinking hot chocolate, making strange things from clay, writing blog posts, and cooking. I love the summer, and I love the grill, but winter cooking has its own rewards, too – namely, lots of braising meats, one-pot meals, slow-cooking ragus, and, my personal favorite, Belgian beef stew. We adapted this one from a Mark Bittman recipe about ten years ago, and we’ve been wearing it out ever since. Phoebe enjoys the whole package, Abby just the meat and potatoes. The best part, for the grown-ups, is the Dijon mustard you drizzle on at the end, and the tangy, beery broth you can drink with your spoon. It’s very basic, very tasty, and it’s warm. Until we learn to ski, it will have to do. —Andy

In a Dutch oven, heat olive oil and one of your garlic cloves (cut roughly into three pieces) over medium high heat until garlic turns golden, about 1-2 minutes. Remove garlic from oil with slotted spoon. Add cubes of beef to the oil, in batches, and brown on all sides, salting and peppering as you go. Set beef aside. Add onion to pan, reduce heat to medium, and cook until onion is soft and sweating, about 8-10 minutes. Then add beef and its juices back into pan, with bottle of beer, one bay leaf, and thyme. Bring to a boil, scraping the bottom of the of pan as you go. Reduce heat to low, and cover. Simmer for 20 minutes, then add carrots and your other clove of garlic (chopped), and cook for another 25 minutes, until carrots are tender. Serve over warm, boiled potatoes and top with a tablespoon of Dijon mustard. You’ll need a spoon.

Leave a Reply to my name is ish Cancel reply

These kinds of meals make me wish I ate meat.

Mmmm…it’s been more than a year since we’ve made a version of this! Question: do you think Guinness is too dark a beer? I still have several bottles left after some experiments with chocolate stout cake. Or are we just going to have to drink it?

Oooh, Dijon mustard on beef stew, what a great idea! Will have to try that out on my (mostly) mustard-loving family.

Sounds delicious. I like the dijon on stew idea.

Melissa, answer: You only need one bottle for the stew, so yes, absolutely: use the Guinness and drink the leftovers.

It’s finally in the low 70’s here, so I’ll give the Belgian Stew a whirl! It looks tasty enough to evoke shivers, even in the desert!

We are a cold weather family….snow boots and sleds and all. I love this recipe! Can’t wait to try it!
Best,
Tina

This looks delicious. I can’t wait to try the dijon!

Hi, I love every recipe I have ever tried on this site, but this one eluded me. My meat turned out really chewy, I mean REALLY chewy. I think I know the problem, just wanted to confirm with you. I used regular old stew meat. Do you think that was it? Should I marinate it in beer before hand? I followed your recipe to a tee! Thanks so much and keep up this great site.

Katie – I’m so sorry! Yes, that’s why we use sirloin. Stewing meat is usually too tough. Thanks for the feedback — we will tweak the recipe to make that more clear.

I can totally relate – we are not a cold weather family but love cold weather cooking. Can’t wait to try this recipe – looks delicious!!

I cooked a variation of this on Sunday-thanks for the inspiration! I consulted another recipe for carbonnade, too, and made the following changes: Add an additional cup of water with the beer (don’t just use 2 bottles–a little too strong!). Crumble 4 slices of bread into the liquid, as well as a couple Tbsp. of prepared Dijon mustard. Mine simmered for over an hour–I used chuck roast. I left out the potatoes and carrots, and served over egg noodles (our kids are better at eating noodles than potatoes), with a side of broccoli. This variation makes a thicker gravy. Yum!

i woke up this morning (13 degrees on the thermometer outside the bedroom window) thinking about this. all ingredients purchased by 8:10 am…

I made this last night…we loved it and soaked up every drop of that glorious broth with crusty french bread. My four yr old and almost-two-year old ate it up. Big success. Of course when I was doing the dishes I remembered: DIJON!!!! I was the most excited about that ingredient, but totally forgot to add it. Can’t wait to try it again soon, with mustard. Geez!

can you recommend a good beer to use for this recipe? I am not usually a beer drinker (though I love “tangy, beery broths”) and would have no idea what to buy. thanks!

Alexa-try any Belgian beer (Chimay, Duvel) or any brown ale or porter. basically you want a beer with flavor. Stay away from lagers and pilsners and Coors Light.

I made this divine stew for dinner tonight. I added two handfuls of mushrooms and used a Stout beer, and served it with mashed potatoes and green beans. It was sooo good! Definitely adding it to my family winter favourites.
Thanks for the great recipe!

This is an awesome recipe, but I should have used sirloin….I used “stew meat” which was too tough. Next time! I also served this over rice and added a dollop of sour cream in lieu of mustard. Delicious! Also….was wondering if this recipe would work in a slow cooker – Jenny, how would you convert it?

My family loved this dish. Next time, i’m subbing the bag of ancient mixed grains from Trader Joe’s for the potato, maybe with a little more liquid. Yum!

This stew is fantastic! My family ate it up, even the pickiest one, my 9 year old! Love the idea of cooking the potatoes separately for two reasons: Ms Picky Eater doesn’t like them, so it was much easier to keep them off her plate; and they are cooked perfectly and then can just absorb the yummy sauce. Easy to make and came together quickly.

This sounds delicious! As a non-beer drinker [I never gained a taste for it], do you have alternative suggestions for what I can use in its place? Or a beer that won’t make it taste too much like beer? [I’m the worst, I know].