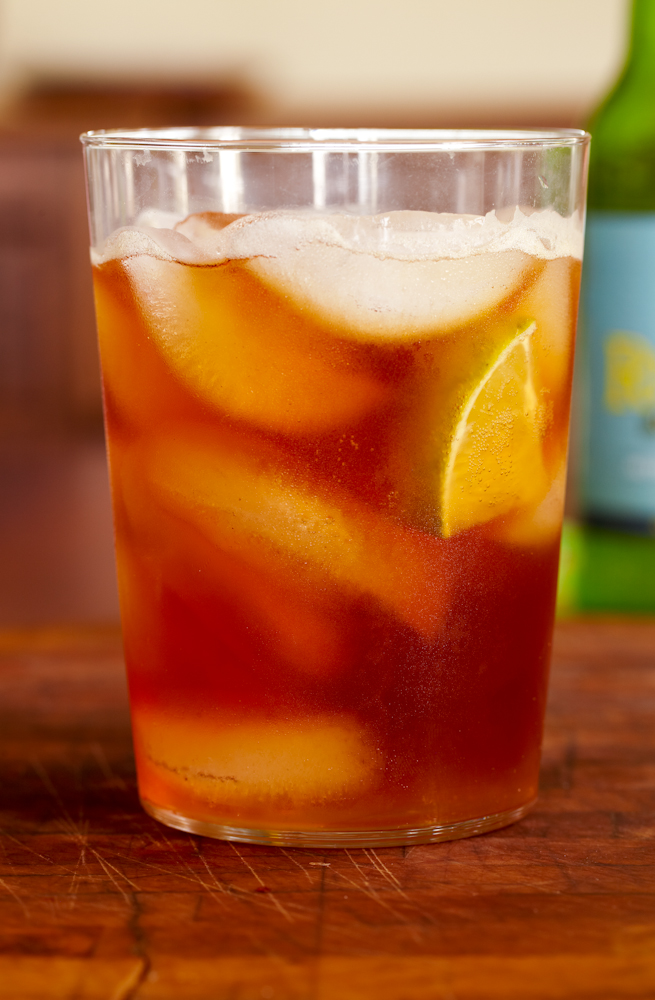 Now that the swampy, soupy weather has officially arrived, it’s time to share a few heartfelt words about something near and dear to our hearts: the evening drink. When we got married, someone gave us one of those full-on Pottery Barn cocktail kits, the ones that come with the ten-gallon martini glasses and silver-plated shaker, stirrer, strainer, tongs, and beveled serving tray. Twelve years later, it’s still in the box. In the basement. Under piles of baby clothes and bank receipts we have yet to shred. That’s not because we don’t drink; with a 6-year-old and a 8-year-old underfoot, there’s nothing—and this is going to sound bad, but really: nuh-thing—we enjoy more than a taste of medicine at the end of a long day. The truth is, we’ve never busted it out because we’re not fans of the fussy drink. We don’t believe in cocktail hardware, and we don’t believe that having people over for dinner should include said people being forced to sit in your kitchen for twenty minutes, watching you craft a cocktail from fresh-squeezed kaffir limes, muddled mint leaves, and turbinado sugar. As you probably know from reading this blog, we tend to follow a pretty straight-up philosophy on food, a philosophy that also happens to apply cocktails: few ingredients, good ingredients, simple preparation.

Which brings us to the Dark and Stormy.

Having not grown up with a yacht, a family compound on the Vineyard, or a Roman numeral after my name, I had no idea this drink even existed for the first thirty-three years of my life. And can I tell you how I now mourn for those years? The Dark and Stormy is everything a cocktail should be: damned tasty, of course, but also fizzy, cold, summery, citrusy, and very, very easy to make.

Here’s how. Get a decent-size highball glass and pack it full of ice. Now fill that glass halfway with some good dark rum. (We use fifteen-year-old El Dorado from Guyana or the equally good Zaya from Guatemala. And there is always Gosling’s.) Then—and this part is crucial—top it off with real ginger beer, as opposed to standard-issue ginger ale, which tends to be wan and sugary and overly carbonated. (We used to use Reed’s Extra Ginger Brew, but we’ve recently switched to Regatta, which is a little less sweet and even more gingery and hails from Bermuda, where they know from cocktails.) Finally, the lime. Don’t skimp on the lime! We love the way it balances the sweetness and spice of the rum and the ginger beer. Squeeze two wedges into the glass and discard. Take your third wedge, squeeze it, run the fleshy part once around the rim of the glass, and drop it in. Give a quick stir with your knife. Now partake of the Dark and Stormy. Summer is upon us.

*If you’ve never heard it, check out this song by the Drive By Truckers. The lyrics say it all. “Put that drinking jacket on and enjoy a little fog.”

have you guys tried this? http://www.barrittsgingerbeer.bm/index.html

try it (i think they have it at whole foods?)!

yes! they sold that kind in block island (where the photo was taken) it’s from bermuda too, right? had no idea it was at whole foods, too.

As I figured, you are not only people who share my philosophy on food but booze as well! Love the cocktail suggestion and will give it try. However, it may be hard to pull me away from my usual chilled vodka, straight-up with tons of olives. I like to think of it as a salad and drink at the same sitting!!! Cheers to a great weekend.

Hilarious! Mostly a beer girl but can’t wait to try a Dark & Stormy!

Sounds delish! My husband and I have been searching for a good “summer signature cocktail” recipe…we will try this one for sure (after we battle the bedtime blues with our 2 and 4 yr old, that is). Thanks!

After I Facebooked this post last week, party-throwing friends served dark and stormys at a backyard party last night. Lovely party, diversely delicious potluck contributions, self-made music, backyard fire pit that kept away most of the mosquitos, happy kids, etc. Beautiful humid Rhode Island evening that cooled off after a quick rainshower, after which we went back outside, and before it cooled off, the dark and stormys were just the thing. Thanks for the inspiration.

I cannot overstate the degree to which this drink just made my dinner party tonight. Somehow the craziness of the four hyperactive 4 year old boys and four toddling 1 year olds just faded into the warm summer breeze. We had yogurt marinated chicken too–super yum! Thanks so much!

have you tried the Kraken dark spiced rum? makes a really nice d&s.

and, yep, this is one of my fave new finds!

I definitely have to give this a try. (BTW, as a recent purchaser of the “Time For Dinner” book, I was delighted to discover this website. Many thanks for sharing what is obviously a labor of love.)

I just happen to have all these ingredience and will share the Dark and Stormy this afternoon at my sisters cookout! Cheers!

This summer’s evening cocktail at our house is the Moscow Mule, which is basically a Dark & Stormy with vodka & a little squeeze of simple syrup. We’ve also been fine tuning our version of the Shandy (1/2 beer, 1/2 ginger beer) in honor of the London Olympics!

I think that this will be the perfect drink for this weekend – as summer is coming to an end.

is registered trademark of Gosling’s Brothers Limited. In any case to make a proper one it is always ginger beer first, rum last. It creates the look of stormy skies over the sea. Try it you’ll see.

Several years ago at my engagement party, a friend offered to make me a Dark & Stormy. She created a pint-glass-sized cocktail which she then promptly dumped down the front of her white (and, it turned out, sheer) dress. In the ensuing embarrassment and laughter (with her, I promise), I never actually tried the drink. Last night, I read this blog post and thought, that sounds mighty delicious. My husband and I are in our living room this evening with our new favorite home cocktail. Thanks for creating a new memory to go with the D&S.

My go to drink this summer is very similar to the above but with Vodka instead…the Moscow Mule. Goose Island Brewery is here in Chicago and they make a great Spicy Ginger Ale (Beer).

Just tried making this tonight. Very good!
Also, just bought your book and I’m about half way through. Love all the inspiration. And I love your red dining room chairs… Favorite Picture in the book: page 86. Totally making a “doll house” out of magazine clippings with my neice while I dream of having one of my own. My husband and I have been trying for a while… Loved your chapter about your experience of waiting to get pregnant too… Love all the raw honestly! Your book is fabulous.