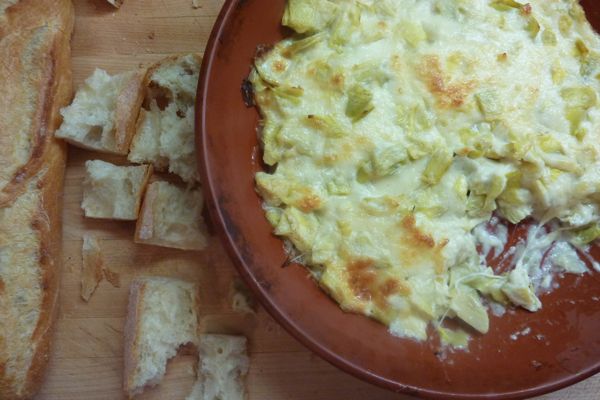 I played tennis in college which, for obvious reasons, was a lot of fun: being part of a team, traveling all over New England to see beautiful schools, getting to leave my afternoon classes early for this travel, thereby avoiding the 117th straight discussion of Beloved or that pre-law professor who’s maniacal obsession with humiliating me in class somehow fell under the acceptable penumbra of “The Socratic Method.” But there were not-so-obvious reasons, too. Like this ridiculously disgusting — and I mean that in the nicest possible way — hot cheesy artichoke dip that somehow made an appearance at our coach’s house every time she’d have us over to get us pumped up for a match or celebrate a victory or watch a big game like the Super Bowl. I have no idea who made it — it wasn’t my coach, maybe it was my doubles partner Jennie or our captain Jane. (Can either of you out there confirm or deny?) But I do know that my team’s most competitive side came out when that hot baking dish was placed before us, and we all fought to stuff as much as possible into our Feminist Theory spewing-mouths. Over the years — er, decades — I’ve tried to upgrade the dip by including herbs or spinach or, you know, experimenting with the acidity. But in the end, I always go back to the original recipe, which was so easy anyone could make the thing — even a college sophomore who couldn’t understand Beloved no matter how many times she read it. 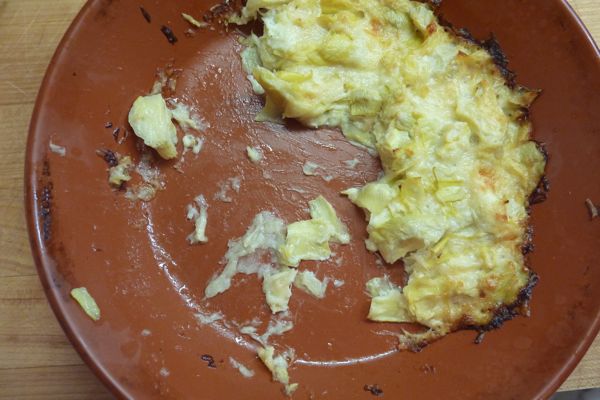 And if you drain the hearts and then puree them in the food processor, your picky eater may not realize he is ingesting a vegetable. Not that I would stoop to such things.

we have a version of this dip that we absolutely devour. very similar, but ours adds garlic salt, sundried tomatoes and uses swiss cheese instead of mozzarella. it’s definitely our go-to dip.

you had me at “dip.” i love this stuff, too. this might fall under the file heading “failed upgrade” but in an effort to make something like this minus the mayonnaise, i’ve immersion blended a can of artichokes with a can of cannellini and a glug of OO and a clove or two of garlic and grated (canned!) parmesan (and sometimes chopped green chiles). bake til hot.

Just reading about this dip ruined my diet plan for the weekend, but it sounds amazing!

I am also relieved to hear that I am not the only who one read ‘Beloved’ and thought “WTF?” But the dip? I totally get it.

Sounds great!! And sometimes with a recipe and the ingredients…..less is more. Can’t wait to try it!

Day 3 of snowed in and I have all this stuff in the kitchen. I am off to make this dip right now. It can be lunch for three, right?

Adding this to my Super Bowl line up, may have to make it before,, you know, just to test it out…

Warning Blissmamof3: I made it last night to, you know, test it out, and ended up eating the whole thing for dinner myself. Standing up. Not exactly a family dinner to be proud of.

Sounds great. will make it for our super bowl party

I make a version of this too – try adding some cream cheese. (In case it wasn’t rich enough already.) It’s also good with cheddar instead of moz. Yum!

Mmmmm. I made this for the Packers vs. Bears playoff game. (Go Pack Go!) Four of use ate the entire dish within two hours. It’s just that good!

I make this all the time and the recipe I use is one cup Hellman’s Mayonnaise, one cup parmesan cheese, a can of artichoke hearts drained and chopped into small chunks and one can of small green mild chiles(don’t need to drain) and a few drops of Tabasco, mix together and bake at 400 degrees until golden and bubbly! Delicious!

Couldn’t resist making this for a party of two watching the Super Bowl. It’s an great oldie and fail safe. Thanks.

Thanks Jody R! Fail Safe are my two favorite words in the English Language. 🙂

This is my go to artichoke dip. Just bought some artichoke hearts yesterday – can’t wait to whip this up for the Michigan game this Saturday 🙂

Just made this tonight – it was gone in under 5 minutes!

I am a newsletter subscriber. Do I win the Lodge cast iron skillet?

This looks fabulous, I’ll def. be making this soon.

“I am a newsletter subscriber. Do I win the Lodge Cast Iron Skillet?”

mmmmm. “I am a newsletter subscriber. Do I win the Lodge cast iron skillet?”

My father in law makes this exact same dip recipe, except he adds a half cup of finely diced jarred pepperonici peppers. It adds a great tang to cut the richness!