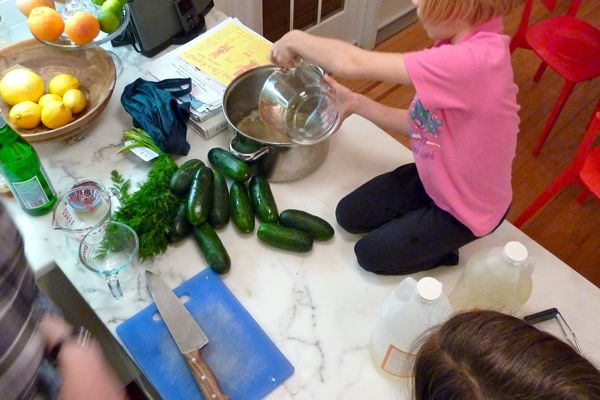 One of the perks of writing a food blog — besides the not-getting-paid part – is that, when friends visit us now, they tend to really bring it, and I mean that literally. In the past month, we’ve had guests show up with: brownies baked in a crazy-ass, s-shaped, all-edges pan; a bottle of dark, rich homemade red wine vinegar; extra virgin olive oil carted all the way back from Buenos Aires; purple basil-infused simple syrup (forreal!); and a still-warm batch of gluten-free, dairy-free, lemon-iced blueberry scones. All were amazing, and all were totally appreciated, but if I’m being honest here, I’m not sure any can compete with what my friend and work bro, Kendra H., brought a couple of weeks ago. Kendra, you should know: you have firmly established yourself as the early front-runner for this year’s Most Valuable Dinner Guest award. Two weeks ago — on a frigid weeknight, no less — Kendra came over for dinner, and she brought goodies. Specifically, she brought a nice bottle of red for the grown-ups, a couple dozen beautifully wrapped and presented (she’s crafty like that) cookies for the family, and, for the kids… a recipe for making garlic and dill pickles, along with a pair of jar tongs. She set up shop in our kitchen, with Abby and Phoebe, and spent an hour boiling and sterilizing and chopping and directing traffic. The kids, who love elaborate-but-still-totally-kid-friendly projects like this — and who also love pickles — were completely into it. (So were their parents, who are always grateful when someone else is willing to provide a little free entertainment.) They set up the jars, quartered the mountain of kirbys, portioned out the garlic cloves and dill and peppercorns into each jar, and — here’s the best part — when they were done, got to sample a jar of the finished product that Kendra had brought with her, so the kids didn’t have to wait two weeks — the pickle gestation period — to taste the fruits of their labors. 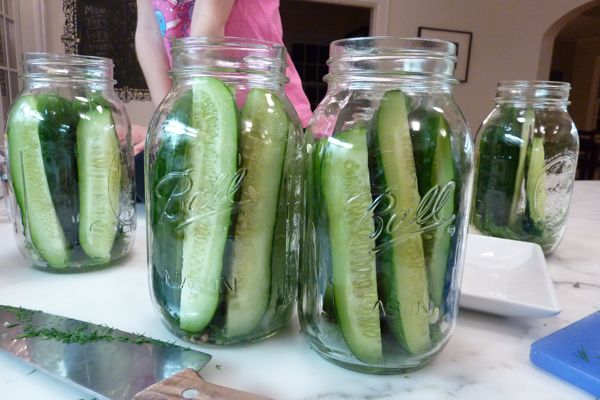 Pickling is something we ‘d always kind of wanted to do, but never quite got up the guts to try. It seemed like one of those things you need to have a hipstery, character-building beard and a sublet in Bushwick to attempt. It always seemed intimidating, with all the boiling and sterilizing and jar-sealing, but here’s the thing: it’s not. It’s easy and fun. Don’t take my word for it, though. Here’s how Abby chooses to remember the experience: “I got to cut the pickles! Well, they were cucumbers. It’s really cool. Then we had to let them sit for two weeks. I thought it was fun because, ummm, the whole family cooked it.” And here’s what her older sister, Phoebe, has to say about it: “I thought it was fun to watch the jars sit in a gigantic pot of boiling water. And Abby didn’t cut the pickles by herself, for your information. I got to help, too. My favorite part was when we put the tops on the jars, and you could hear the hissssssssssssssss sound of the air going out of them. The best part is the pickles, though. They taste salty and sour.” And sweet, too. And really damned good. Waiting those two weeks for go-time, when you’re 7 and 9 years old, is like waiting for Christmas morning. I can’t tell you how many times Abby rolled out of bed, came downstairs, looked at those jars, and asked, “Has it been two weeks yet?”

When the day finally arrived, the kids managed to hold off until I got home from work, and then we popped a jar open and devoured the entire thing, standing there together in the kitchen. So good. So satisfying! And the best part is, we still have four more jars to go. — Andy 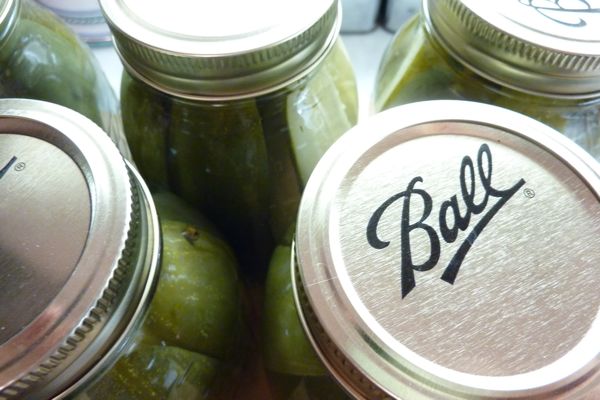 In small saucepan, bring one cup of vinegar to boil. Turn off heat, and add garlic to saucepan. Let stand for one minute, then strain. Set garlic aside.

Fill a lobster pot to an inch or two from top with water, and bring to boil. In another pot – which must be stainless steel – combine 9 cups vinegar, 9 cups water, and salt. This is your brine. Stir until salt is dissolved, and bring to a boil.

While you’re waiting for both pots to boil, wash and quarter the kirbys. Make sure they fit into the jars; if they don’t, trim the ends so that they stand about 1/2 inch from the top of the jar.

Once water in lobster pot is boiling, submerge jars completely – with the open open tops facing up, letting them fill with water – and sterilize for a few minutes. WARNING: DO THIS VERY CAREFULLY AND MAKE SURE KIDS ARE STANDING BACK — THE HOT WATER CAN SPLASH UP. Then, using jar tongs, tip each jar to empty water, remove from pot, and set on counter. (Do not empty lobster pot yet; you’ll need this boiling water in a minute.) Into each jar, put some of the vinegared garlic cloves, peppercorns, one chili, and a handful of dill. Fill each with kirbys until good and snug. Then take jar tops — which come in two pieces – and place them into boiling water in lobster pot for two minutes. Remove with tongs, and place in a bowl.

Take boiling brine from the stainless steel pot and fill the jars to 1/4 inch from top. Take jar tops and seal the jars, and turn them over on the counter to ensure a good seal. Now, place all the sealed jars — full of cucumbers in brine – BACK into the water in the lobster pot and boil for 10 minutes. (NOTE: you may need to take a little of the boiling water out of the pot before doing this, since the full jars displace a lot of liquid.) 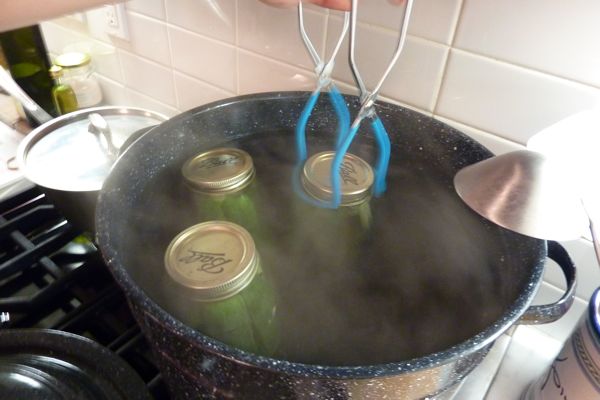 Take the jars out and let them sit for an hour or two, until tops have all depressed (which means they have sealed, and which means, when you open them later, they will make a pop). Put them somewhere cool, and wait two weeks, if you can bear it. Eat. Slice and put on hamburgers. Dice and put in your chicken salad. Use the leftover juice for your martinis. Go off! And thank you, Kendra. MVDG! MVDG! MVDG!

I love interactive dinner parties, and this one was even better because you had something to look forward to down the road. I have only made fermented pickles. I’ll have to try these sometime too.

We make a lot of fermented pickles (they are way hipper up here in Vermont) and as they don’t involve any boiling anything they are even more kid friendly, and a fun biology lesson.

Do your girls (and you and Jenny) like sweet pickles? If so, you must try this quick pickle recipe from Smitten Kitchen.

So easy, so good, so quick. You can eat them the same day, though they get better after some time in the fridge. Check it out.

Oh, I have to do this! We love pickles and what a fun project. At the risk of sounding completely ignorant, I have a question. I’m not sure I know exactly what a lobster pot is (a pot for cooking lobster, I presume?) but I’m pretty sure that I don’t have one. Is there a suitable substitute I can use? Large stock pot? Dutch oven? Anything? Thanks!

You can also do this very same process…but with *green beans*! And wax beans, too. So, so, so good!

I have always wanted to do this with the kids but was too intimidated as well. Thanks for this!

I would love to do this with my son but I can’t find 20 oz jars anywhere. Can larger 32 ounce jars be substituted without changing cooking times or amount of brine?

Do not flip the jars upside-down. This can cause a false positive for a seal. If the jar isn’t properly sealed, some bacteria could grow.

The water in the lobster pot/canner must be at least one inch above the tops of the jar.

Jars must sit in a cool, dark place undisturbed for 12 to 24 hours. After that time the jars can me moved and the jar rings can be removed if you want.

For a full set of canning safety rules the University of Georgia Extention canning website is really helpful and has other good pickling recipes.

I hope this didn’t sound too preachy, but canning safety is very important. Nobody wants to get sick from their delicious home-canned goods!

@Barbara – a lobster pot is one of those wide/tall enamel stock pots, shown in one of the photos above. You need a pot that’s deep enough for the filled jars to be submerged by at least an inch of water (as in Julie’s canning safety notes above). The advantage of the lobster style pot is that they aren’t heavy – you just use them to boil things, so a heavy bottom isn’t necessary. This is very helpful when you get it filled with water!