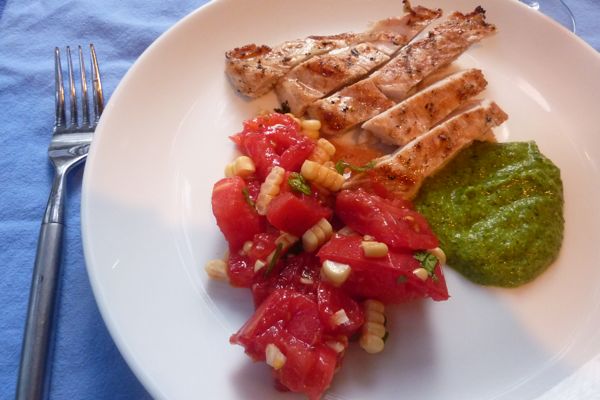 I think our “Grilled Chicken for People Who Hate Grilled Chicken” recipe has been the breakout dish of the season. And not only in your house as so many of you have mentioned — but in mine, too. I’d say we’ve served up some version of it at least once a week since June.

Which troubles me. I’m worried that it might become the Maque Choux of 2010. Maque Choux was this crazy delicious summer stew I found in Gourmet. It’s made with chicken and sausage and sweet corn, and if you haven’t ever made it, you should definitely remedy that matter as soon as possible. (Especially since fresh, sweet corn is disappearing rapidly.) When I met Maque Choux, I fell hard. We spent practically every Saturday night together for six weeks in the summer of 2002. With friends, with family, over candlelight. And then — you know how it goes — we flamed out. I look at Maque Choux’s photo now and feel nothing. Nothing except a deep sense of sadness and loss. We were so close once. What happened??

We overdid it, is what happened. And I am determined not to repeat the mistake with this year’s love story. Hence the big dollop of watercress sauce next to the grilled chicken. The vibrantly green sauce can be whirled in a blender with just about any leafy lettuce that is about to wilt (I’ll bet you have some in your fridge right now) then spooned over the chicken (or used as a dip, should the kids be wary). It’s just enough of a spark to keep things interesting.

In a skillet, saute 1/2 shallot in olive oil and a little butter over medium heat. After a minute or so, add a large bunch of watercress (or any other leafy salad green like spinach, arugula, bibb) and saute until just wilted. Remove from heat and let cool. Add to a blender along with a heaping teaspoon of Dijon mustard and about 1/2 cup chicken or vegetable broth. Puree until blended, adding more broth as necessary to achieve desired consistency. (I like mine to be more soupy than gloppy.)

PS: So sorry about the tomatoes in this picture. The photo was taken a few weeks ago when the heirlooms were still heavy, deep red, and aromatic. I’m already feeling summer tomato withdrawal — only about 48 weeks to go til I see one again.

came across the article about you in this month’s Whole Living, which led to me your blog. it’s wonderful. thank you for reminding us how important family dinners and homecooked meals are to our happiness : )

Maque Choux and you may be over but I will bet this starts new affairs all over the place! (That hussy.)
The chicken is different. It can morph (remember the curry version? we haven’t even gotten to that yet) and so I do think it will be with you for a long time.
But I know what you mean. Some dishes just run hot and heavy for a time, and then poof–gone. This one, though, I’ll bet has staying power. It’ll be interesting to see in 2019.

I know what you mean about the tomatoes. I find myself hoarding the last few beauties from my garden. I don’t want them to be gone. On some level I think that as long as there are still tomatoes on my kitchen window sill, summer will carry on.

Also. Maque Choux just made it on next week’s meal plan. Thanks.

We have made the lemon-pepper chicken several times this summer (and our last son went to college in 2002!). We’d love the recipes for the other versions.

ok, this is not fair…looking at all this food while waiting for my hubby to get ready to go out to dinner. what a wonderful (and delicious) blog concept! love your writing and your photos are great, too. i will definitely be back for more.

I’ve never cooked with watercress before, only used it fresh in salads, but I like the sound of this sauce. Did you receive the leaves from the stems before sauteing or just put the whole stalk in?

Winner!!–my husband and I loved this dish. My 8 mos old looked very interested in it also.
I used my grill pan and it turned out perfectly!

The watercress dressing sounds delicious, but I’m even more intrigued about the Maque Choux. I will need to check that out.