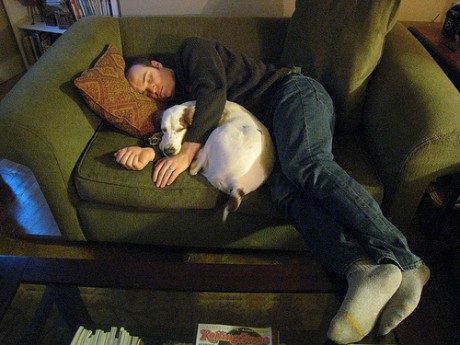 I get the feeling, judging by the comments section on certain posts, that family dinner is not always a family affair. That, you know, some of us aren’t so good at pulling our weight. Luckily, there’s a new book — full disclosure: I edited it — that just might help take a little of the resentment out of the equation. Here, to give us a whole new way of thinking about the division of labor around the house (i.e. stop focusing so much on 50/50!) is DALS guest-poster Paula Szuchman, Wall Street Journal editor and co-author, with Jenny Anderson, of Spousonomics: Using Economics to Master Love, Marriage & Dirty Dishes. You can also read their excellent and funny blog here. — Andy

My husband and I both cook, and we both loved being cooked for. There are few things more luxurious than lying on the couch after a long day, the smell of sautéed onions wafting through the living room, secure in the knowledge that at any minute, your favorite person is going to walk over and put a plate of food in front of you—and if you’re really lucky, also a glass of wine, a remote control, and license to watch reruns of the Real Housewives of Beverly Hills until you pass out.

Others aren’t so lucky. From what I hear, there are plenty of readers of this blog whose spouses don’t cook, can’t cook or never come home on time to cook. You guys are wondering if there’s a secret to reprogramming such spouses. I have two suggestions.

First, accept and overcome. I know that’s not what you want to hear, but let me explain. Each person in a relationship has things he or she does better, relative to other things. So sure, your spouse could fry an egg if someone had a gun to his head, but in terms of skill and efficiency, he’s way better at changing light bulbs. He has what an economist might call the comparative advantage in light-bulb changing. You have the comparative advantage in cooking.

The theory of comparative advantage is the foundation of free trade—it means that if each country specializes in what it makes best relative to other products, and then trades, every country is better off in the end. Comparative advantage is why China exports flat-screen TVs around the globe, and the U.S. specializes in trashy reality shows. In your house, maybe you’re relatively better at folding laundry and cleaning the hamster cage, and he can mow the lawn and program the Tivo in the time it takes you to brush your teeth. Specialize and you’re both better off.

But okay, I get it, cooking is a little different. Because like I said, it’s so damn awesome to be cooked for, that no one wants to go their whole life never experiencing it. Which brings me to my second suggestion: Find three dishes your spouse can develop a comparative advantage in. Specialization can be dynamic. China didn’t always dominate the flat-screen TV market. It set a goal and it went after it (I mean, I assume it did, I really have no idea what goes on at the Communist Party HQ behind closed doors). Similarly, your husband doesn’t always have to be a dimwit in the kitchen—he can develop a specialization and dominate it.

When I was a kid, there were three things my dad cooked: omelets, Steak Umms, and chocolate mousse. If we ever ate any of those, it was because my dad made them. He got a kick out of it, but no one would dare ask him to cook, say, chicken cutlets or meatloaf. They just weren’t his specialties. But we loved all three, and we loved that he loved making them for us. Three dishes, that’s it. Anyone can learn to make three dishes.

My husband can make more than three things. But of all his signature dishes, there’s one he really, truly specializes in: fried eggs. I think his secret is a ton of butter. But he’s also got the flip down pat. He invented a dish around the fried egg that he calls Gringo Bi Bim Bop (after the Korean dish). It’s a bowl of rice (brown rice, in our house), topped with steamed kale, topped with a fried egg, drizzled with soy sauce and sriracha. It’s good for dinner, but it also happens to be the best hangover breakfast I’ve ever had, hands down. 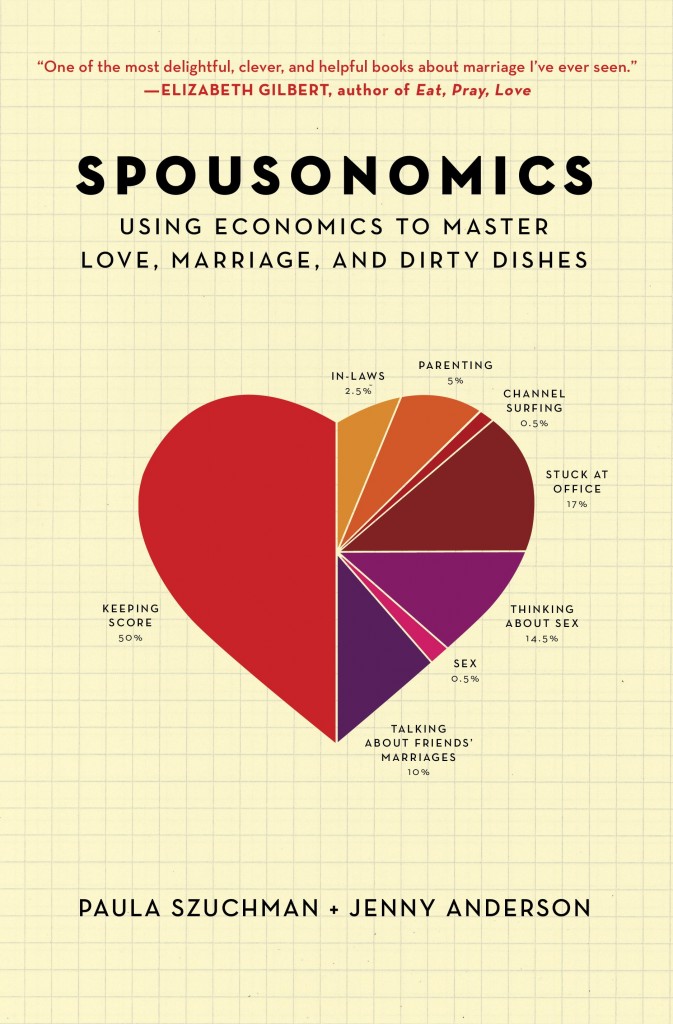 Photo at the top of this post provided by Pluto.

Steak Umms!!! Alas, the question remains – what if your husband can’t cook OR change a lightbulb? Ugh! That said, he did manage to heat up some frozen Trader Joe’s finger foods for the Superbowl. Baby steps, I guess…

P.S. Will be purchasing book immediately…

My husband & I spent too much time at Spousonomics website this weekend watching the Chris Rock videos:) Hilarious.

The real problem is that the lightbulbs don’t need to be changed daily, or three times a day the way meals do with littles at home. The winter can be especially challenging for those (like me) whose spouse is great in front of an outdoor grill with a beer in hand.

This is very true. During 9 months of the year, I do about 90% of the cooking in our house . But I like to cook and I like to grocery shop, plan meals, try out recipes, etc. The other 3 months of the year, we split teh cooking about 60/40 with him doing more dinners than me since it’s grilling season (and I’m not really sure how to use the grill). This works for us- and it balances out as I think I have put the trash out on trash day only twice since we bought our house. My husband is great about other household chores- he’ll clean bathrooms, make beds, do the laundry (although, curiously, never put it away). So I say, go with what works for you.

And my husband does have a few signature dishes in addition to being master of the grill- he makes deliciouse chicken cutlets w/red sauce, a great roast pork loin and these yummy chocolate chip, cranberry oatmeal cookies. I think I’ll keep him.

The last time my husband was in charge of dinner he forgot to take the cardboard off of the frozen dinner before putting in the oven and the pizza basically melted into the cardboard. I’m totally okay being the cook in our house. The great news is: he is the kitchen cleaner after I cook. I’ll take that deal any day!! And when my dad comes to visit, I let him cook for us. 🙂
The books looks really interesting–I’ll have to check it out. Thanks.

Just to throw it out backwards… my husband does almost all the cooking. Even when I do cook, he usually ends up needing to help me. I do wash the pots and load the dishwasher, but I know what you mean about the being cooked for being a statement of love… so I bake. I can barely fry an egg, but I can make bread and cake and pie from scratch! All self-taught!

my boyfriend is really good at making fettucine alfredo, cheese enchiladas, baked ziti, spaghetti, garlic bread, garden burgers, calzones, pizza… you get the idea. Great food doesn’t need to be overly technical and our kids always devour the food he makes. Our deal is that if I make dinner, he does the dishes. If he makes dinner, I do the dishes. I make dinner 88% of the time, but if I’m coming home late or need a break from the routine, he knows how to jump in – and really, jumping in with spaghetti and jarred sauce is sometimes the perfect thing. I also love it when we make dinner together – it’s much more relaxing, but it requires that we turn on the TV to distract our kids so we can complete our thoughts and sentences (it also confuses dish duty, but most of the time, that’s okay).

This is awesome. 2 of my dad’s specialties when I was growing up were omelets and steak umms. I totally forgot about that until I read this.

Also, thank you for this post. I get so angry sometimes when I think of how little my husband does around the house. This actually made me look at things a little different. I’m sure he would thank you too:)

I saw you on CNN! You were so funny!

This is excellent! My dad never cooked but he did have his three specialties that we only ever ate if he made them; and it was usually because mom wasn’t home.

I love cooking but I’ve never been cooked for by my partner. He just can’t cook a single thing. Maybe I need to get him to work on some specialties!