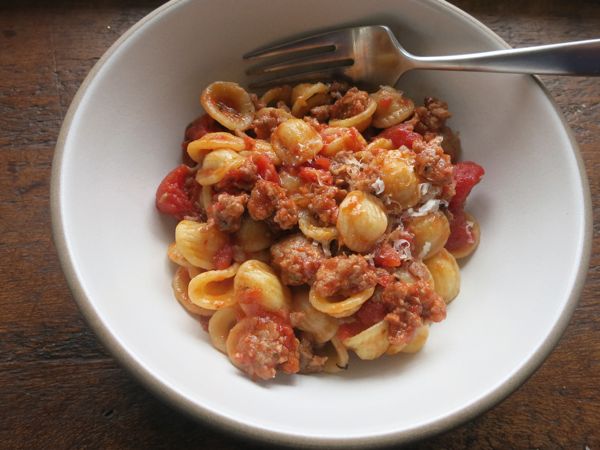 I’m a little obsessed with this dinner — even though I haven’t really eaten a legitimate bowl of it yet.

It started at the farmer’s market on Saturday — right now is slim pickins there in terms of greens and produce (see: Winter, Brutal) but I was still able to pick up a few old friends that I had been missing these past few months: Some good eggs (as you know) a mini blueberry and a mini lemon pie for Andy’s birthday (as of this tenth day of April, breakfast pie has officially eclipsed the birthday biscuit), and some sweet Italian pork sausages from Kings Roaming Angus Farm. Having a coil of these sausages in the freezer is Money in the Bank, as far as dinner is concerned. I usually don’t do anything with them except broil or grill as is, then serve with a shredded kale salad and a can of baked beans — a rich man’s franks and beans. But when I got home, I happened to place the shrink-wrapped pork next to a can of tomatoes, and just like that they spoke to me. “Sausage bolognese,” they said. “We dare you not to make it.” 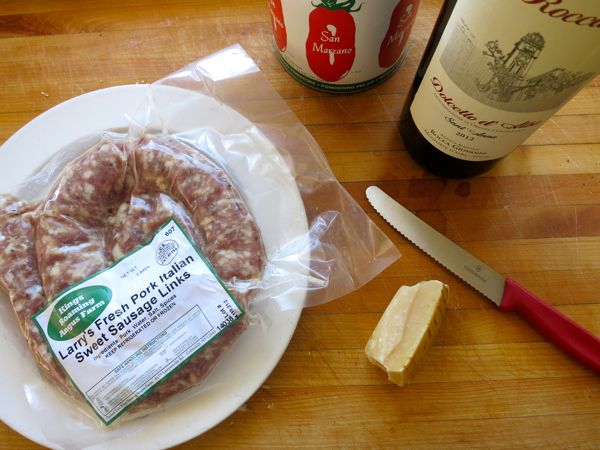 The thing about sausage is that it’s not a whole ingredient, per se, but if you buy good quality ones, you know what’s in them (well, within reason; it is a sausage after all) and what’s in them is usually spices. Then when you add the whole pork-fat thing to the equation, you gotta figure that half the battle of getting something tasty on the table has already been done for you, before you even fire up a burner. You guys know me now and you know that is my kind of dinner.

So I fired up a burner. We weren’t going to eat home that night — or the next or the next — but it was bolognese, so I knew it would freeze well, and plus I had a nice chunk of time with no soccer game to rush off to — a spring miracle if there ever was one. I ate half the batch as I stood there and cooked (I was testing!) but there was just enough left for two tweens* to eat on Monday night when their parents were out. Next time, I’m tripling the batch. 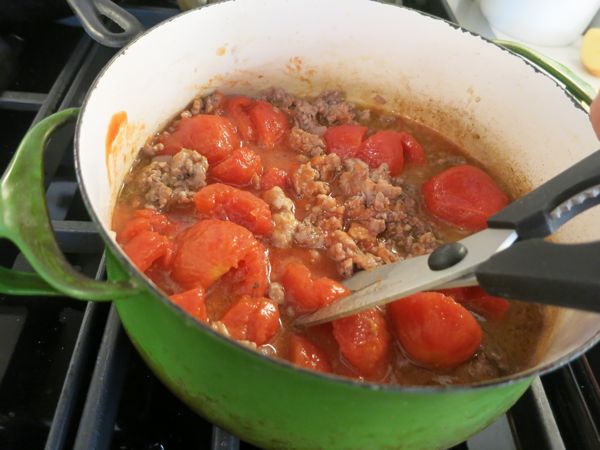 1/2 small onion, chopped finely
2 tablespoons olive oil
3/4 – 1 pound good sweet Italian pork sausage, casings removed (I do this by gently grazing the casing with a serrated edge knife, then sort of turn it inside out so the meat falls out)
1/3 cup red wine
1 28-ounce can whole tomatoes with their juices
1 pound orecchiette
1 tablespoon butter
1/4 cup freshly grated Parmesan, plus more for serving

In a large saucepan set over medium-low heat, add onions to olive oil and cook until soft, about 3 minutes. Add sausage to the pot, and turn the heat to medium-high, breaking up meat with a fork or wooden spoon. When the pink of the meat is almost gone, add wine and raise heat, cooking until the meat has absorbed most of the wine.

Add tomatoes and using scissors, snip as you see above. (You could also just hand-smush the tomatoes before they go in the pot. But then you get your hands all messy.) Bring to a boil, then turn down heat to low and simmer uncovered for 45 minutes to an hour.

(If not serving right away, allow to cool, and place in a BPA-free zip top plastic bag. Freeze flat. Thaw under running water when ready to use again.)

While the sauce is simmering down, prepare orecchiette according to package directions. Place orecchiette back in the pot with butter and toss. Add sauce and cheese and toss until sauce is clinging to every piece of pasta. Serve in bowls topped with more cheese.

*yes, my pasta-hating 12-year-old turned this into a sloppy joe, piling it onto a soft potato roll. Not gonna lie: it sounds tasty.

Looks awesome and I pre-ordered the new book so long ago there wasn’t even a picture up on Amazon yet! Can’t wait for it to come out!

any suggestions to replace the wine instead?

@jamie: You can whisk together a tablespoon or two of tomato paste with 1/4 cup of water in place of wine; or just omit wine altogether.

This sounds delish! Quick question – why not just buy crushed or diced tomatoes instead of having to hack them up yourself? Is there some other difference in whole vs crushed than simply the condition they’re in?

I make almost this exact pasta sauce weekly! I always use the canned diced tomatoes + green chilis from Trader Joe’s, plus any other random vegetables I have around (usually just bell pepper/onion) and cut up sausages. SO GOOD.

I don’t use red wine, and instead throw in a splash of red wine vinegar, a splash of the pasta water-post cook, and a pat of butter.

This is my dream come true kind of pasta dish.

Thank you for easy weeknight recipes that don’t break the bank or make me curse in the kitchen. Saw this post this morning and enjoyed the dish with my toddler for dinner. We both loved it. I make a variation of it from time to time, but adding the wine (and I threw in some garlic too) really elevated it to a whole new level.

I have made this with peppers, too, for a sausage and pepper pasta. More recently, I roasted the peppers in the oven for a side vegetable, and to accommodate my pepper-hating daughter 🙂

I made this today with pork italian sausage from our CSA farm, the kitchen shears made it much less messy! Thank you so much for that tip. I am so happy I have my dinner made for tomorrow-I did taste it and it is great! I have a pasta-loving 18 year old boy who will probably eat most of it

Made this yesterday–it is a great way to use up leftover frozen sausage! The sausage at our store comes in 1.5 lb packages so I often have 0.5 lb of leftover sausage that I freeze for later. I added 2 chorizo sausages (leftover from another recipe) which was great. Using scissors to cut up the tomatoes right in the pot is a great tip!

So glad Amy & Gretchen & Tania. Thanks for reporting back — I always love that.

A trick I learned this weekend when I was out to dinner instead of putting parmesan cheese on top finish with a dollop of fresh ricotta(if you have it) so good with bolognese sauce!

I made this last night and the sauce was delicious, but I need to know a truck to keep orecchiette pasta from sticking together and not cooking right!

My trick for having the pasta not stick together is to finish cooking it in the sauce for a minute or two. You can kind of slide your spoon around and break up the clumps of orecchiette easily when the sauce is mixed in with it!

I LOVE making bolognese. 🙂 Made a huge batch for work the other day – so much a few folks had lunch the next day and I had dinner for three, plus two more lunches for my husband.

This recipe has an amazing deliciousness to effort ratio! So good–and it’s just two of us–so we freeze half for an even quicker delicious dinner later! We have this (fresh or frozen) every week.

Yum! I tried this with sweet Italian chicken sausage to cut fat and calories. I added oregano, basil and thyme, and a lot of fresh garlic, assuming the chicken sausage wouldn’t be as flavorful as yours. Also added a green pepper and onion. It was really delicious and fast. Definitely one for our regular dinner rotation.

When we were looking to recreate an incredible sausage and orchiette pasta with goat cheese from our local gourmet Italian restaurant, I stumbled across this. Add in a heaping portion of goat cheese to the finished dish right before serving… you’ll thank me later. Adds just the right bit of tanginess.