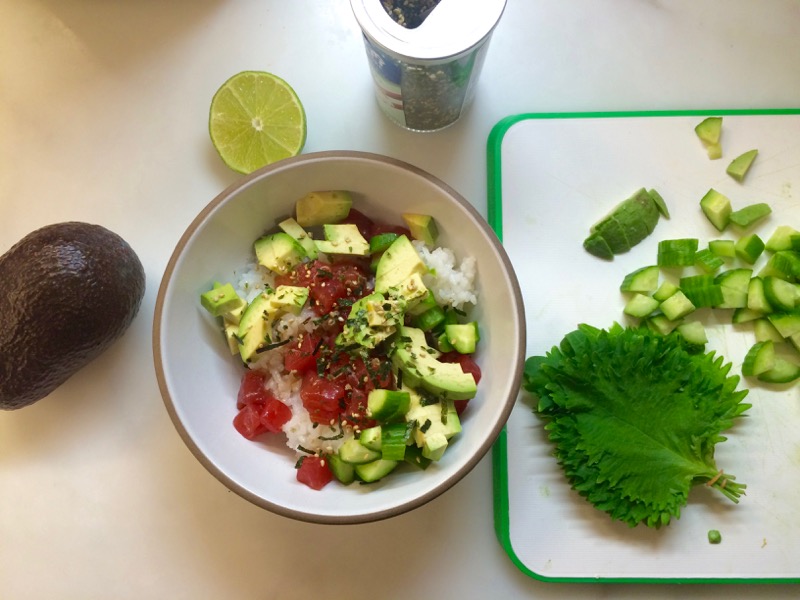 Last year, my twin brother returned from a trip to Hawaii and talked not about the dramatic cliffs of Kauai or the striated sunsets over the Pacific, but about the Ahi Poke. “Let’s make it,” he texted in anticipation of his weekend visit to our house. A few minutes later, another text: This time just a recipe link.

I had never made poke. The dish — marinated cubes of raw tuna — seems like one of those things you should attempt for the first time in its place of origin, and making it in, say, a suburb of New York 5,000 miles from Hawaii just didn’t seem like it would work out too well. (I always think of our college friend Luke, who routinely refused bottles of Guinness because he was saving his first sip for his first trip to Ireland. “There’s only one place that is going to happen,” he told me when he was a senior, then threw back a Knickerbocker. (#Massachusetts)

But the Poke recipe my brother sent looked simple enough and it was basically salty, umami-crazy Japanese food, so I knew it was the kind of thing the kids would love. I hit my favorite Asian market in the strip mall two towns over — as noted, a far cry from Kauai — and procured some sushi-grade tuna. My brother showed up with the rest of the ingredients and we put our poke together in about five minutes. This was approximately four and a half minutes longer than it took the five of us to ravage the delicate little starter like a pack of wild dogs. Good thing there was pasta on the menu later.

Ever since then, I feel like the Richard Dreyfuss character in Close Encounters — remember how everywhere he went, he saw that creepy Devil’s Tower mountain shape? Well, my Devil’s Tower officially became Ahi Poke. Everywhere I go, every social media platform I browse, every newspaper I read, every cookbook I open up, there it is. Apparently, it’s even merited a trend piece in The New York Times. So I did what any longtime DALS employee would do: I looked at all the versions out there and figured out a way to turn it into a meal that would satisfy the particular brand of hunger that results from a hard-fought soccer match in Long Island. (Code for: They got decimated.) This past Saturday, that meant rice, avocado, loads of vegetables. I got some Furikake and Shiso inspiration from Gwyneth Paltrow’s newest book It’s All Easy (an all-around inspiring collection, by the way) which provided a simple, significant upgrade, but in the recipe below, both are optional. Also, I feel I should mention that the meal elicited the much-coveted review from Andy: “I Could Eat Like This Every Night.” So could I! If only it weren’t for a few minor issues like mercury, endangered fish, and budgets. It is cheaper than a trip to Kauai though.

Poke Bowls
Before you write in the comment field, “What planet do you live on?” the astute DALS reader will notice that this is a meal tailor made for deconstructing. Just leave the raw fish out of your kid’s bowl if it’s going to incite a riot.

Cook rice as directed. Remove from heat. While the rice is cooking, place the vinegar, sugar, and salt in a small saucepan. Bring to a boil, and cook until the sugar and salt have dissolved, about one minute. Drizzle the seasoned vinegar into the hot rice slowly, tossing as you go. You should have four cups of sticky rice.

While the rice is cooking, toss the tuna with the soy sauce and rice wine vinegar. Chill in the refrigerator until you are ready to serve. When ready to eat, heap rice into bowls, divide tuna on top, and have diners choose their favorite toppings.

In my house, I’m the one that will have to leave out the raw fish. My kids and husband are more than ready for this. Maybe this week is the week?…

We must be all craving the same thing..I saw a similar recipe in a recent Bon Appetite and tore it out to make..Thanks for reminding me!! Looks great!

LOVE this idea! We love sushi around here, and we just got hooked on Furikake based on Gwenyth’s It’s All Good and Lucky Peach’s 101 Easy Asian Recipes (so many knock-out recipes in both!!) Thanks Jenny– newly inspired after this post, as always!

Any alternative fish recommendations that would work well with this dish?

You had me until……Gwyneth Paltrow. *skip*

I’m no fan of GOOP, but I agree with Jenny – her cookbooks are actually wonderful. You do have to get past a bit of the usual pompous preaching, but it’s no worse than Martha’s “I only use eggs from my own hens” and the recipes themselves are good. Every single thing I’ve made has been a hit with whole family while still being healthful for a health-challenged husband.

I actually did just eat poke at several places in Oahu. It was delicious. However, I can’t help feeling whenever I look at a plate of tuna and rice like I’m eating a giant helping of mercury and arsenic.

Like your brother I also had poke (for the first time) in Kauai! I ate it many times during my vacation and it was on every restaurant menu. It was truly so fresh and so delicious!

We live in Japan and have visited Hawaii where we fell in love with poke bowls. They make an occurrence at our dinner table almost every week. The kids love it since they can customize their bowls! Since we also have a 17 month old, I love that they can be deconstructed for the little one. Poke bowls are a definite hit!

I ‘ve never been to Hawaii but have been enlightened by the poke bowls at Blue Ribbon Sushi’s takeout bar at Hudson Eats near my office in lower Manhattan, a full-blown addiction which is only truly slowed by my weekly lunch budget. I actually prefer the salmon poke but they have many vegetable, fish and cold noodle options there as well. Worth a visit! Definitely going to try this at home.

Lime is just ….wrong. So,so, so wrong. Shiso can scratch that citrus itch, but this is not guacamole + raw fish. I can’t even with the cucumber, cripes. And on the subject of fish, you have a recipe for AHI poke, because you are using tuna. Use salmon, use octopus. This is a hardcore haole, not even happa, poke. Please don’t tell people this is poke.

“Poke-ish” Bowl?
Thanks for the info.

Maybe sweet onions instead of the cucumbers? 🙂

C’mon. I don’t come to DALS for authentic poke recipes. I come here for interesting spins on a family dinner. Give them a little leeway.

Well then I hope you won’t call the food police when I tell you I added jicima and mango to mine. Another magnificent-ish DALS keeper, as per usual!

There are lots of new restaurants in NYC that are serving poke bowl variations. Sons of Thunder come to mind. Check them out for inspiration on what other add-ons you can try.

These kinds of posts and recipes are the reason I love this website. This sounds so delicious and simple, and like a great way to get us out of our weekday rut. Can’t wait to try it. (And I could care less if it’s authentic.) Thank you!

so glad that DALS has contributed to the close encounters thing going on with the poke bowl phenomenon and so timely with the upcoming weekend! cannot wait to assemble and partake with my family. thank you!

Poke has also been my Devil’s Tower recently (great reference, BTW!). A local radio food story here in MN had a story about it recently (see?) and suggested soy and/or some toasted sesame oil. But I love the customizable aspect of it all. Yum!

Poke is definitely a trend right now in nyc, a number of new only poke places have opened with similar mix and match toppings available (although i concur that sustainability of the fish used is a concern)

Hi, I also had lots of Poke on the island of Palau. Now that I am in the Hudson Valley area, I wonder if you can tell me where you went for your fresh tuna? Thank you very much!

Recently moved from Oahu back to the mainland…we miss the poke more than the beaches.

I had something similar for lunch today and it was SO good.

Love this. since I can’t afford sashimi-grade tuna every day of the week, I usually make “poor man’s poke” by just subbing in high quality canned albacore tuna or canned salmon for the raw fish. TOTALLY inauthentic, I know, but when you’re craving poke flavors it hits the spot.

It has been so long since I visited in Hawaii, I forgot all about these. I can’t seem to find officially sushi grade tuna, but got fresh, line caught steaks today that look wonderful and have no fishy smell at all. Think those should work or am I safest to marinate them monger with some lime (ceviche style) or maybe even sear to be safe? Welcome any recommendations. Thanks for another great recipe and post.

I love poke, and didn’t want my concern about mercury to get in the way of my enjoyment. Since I live on the Washington coast and have access to ‘fresh from the fisherman’ Alaska salmon, it only made sense to experiment with a NW spin on poke using salmon. Highly recommended!

I’ve been reading this blog for years, bought DALS book, and love it. So helpful, so fun, so reasonable. My kids think I’m a great cook because of you (and hey, maybe I am). I’ve pounded chicken breasts, made chicken potpies, apple desserts, sushi, sushi bowls, pork ragu, pasta with sausage and broccoli, chicken with tomato sauce and mascarpone, salmon salad, pizzas with lettuce on top, egg and potato salad, and frittatas with potatoes, spinach and kale. But only today (TODAY! after so many years) did I learn that you have a twin brother, just like me. Now, you’re my favorite. Thanks for everything !!