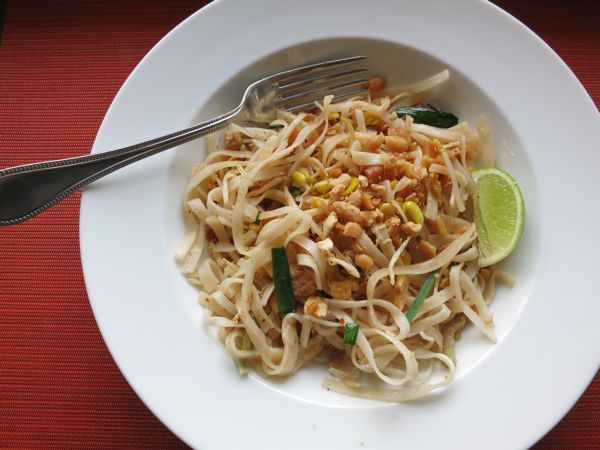 I once overheard a conversation between two of my coworkers. This was back when I had a job in a bonafide office that employed actual grown-up human beings with whom I could interact. We were all at the printer.

“What’d you do this weekend?” said one as she jammed a ream of paper into the drawer.

“Oh, our friends came over for dinner,” said the other.

“We all cooked that lasagna that was on the cover of Gourmet.”

“Oooo….I saw that. The Emilia-Romagna one, right?”

Did you make it with the bechamel?”

“And the homemade noodles?”

“Yup, everything. That was the evening’s entertainment. The kids watched Nemo, then we all relaxed and made dinner.”

Anyway. The girls got older, and as anyone who has read my book knows, we’ve cranked out many batches of homemade pasta with our friends on many memorable nights. (No lasagna yet.) But when I think back to the printer conversation, a different thread of the story jumps out at me: My coworker’s commitment to following an authentic recipe to the letter. And now I’m always on the lookout for dishes that will fit the bill.

As soon as I saw a recipe for Andy Ricker’s Pad Thai last year (described in the headnote as “this is not the dish from the neighborhood takeout joint”), I knew that it qualified. Ricker spent twenty years studying authentic Northern Thai cuisine before he became the James Beard Award-Winning chef-owner behind the Pok Pok empire in Portland (and now New York). The ingredient list for his pad thai was long and the recipe called for things like sweet preserved shredded radishes, tamarind paste, rice noodles that had to be soaked in hot water before frying, and simple syrup, “preferably made from palm sugar.” Oh, my simple syrup would be made from palm sugar all right. I would track down garlic chives (not the same thing as regular chives apparently); I would do whatever I needed to do in order to secure the exact ingredients called for. No shortcutting. No skipping an ingredient and saying It’s just one thing. How crucial can it be? like I tend to do …just about every night. And other than those sweet pickled radishes (I could only find spicy), I managed to do it. We are lucky to have an Asian supermarket superstore nearby (FYI locals: Golden Village on Central Ave), so we hit that, then laid everything on a cutting board (below) and got to work.

Can I just say: Oh My Freaking Lord. This recipe was insane. Every bite a revelation of sour, fishy, sweet and crunchy. I’m going to go out on a limb and say that it was as good as the one I ate in Thailand while my toes were wriggling in the powdery sand of Maenam Beach. Maybe even as awesome as the sand and the beach combined. And we made it in our own kitchen, a half a world away. 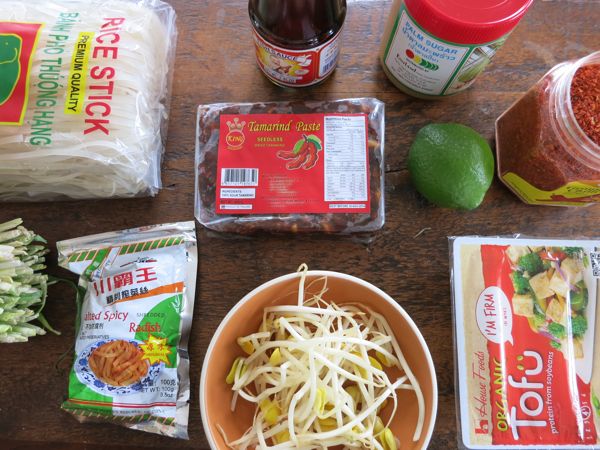 Hi Jenny- looks like your link goes to the lasagne recipe instead. And though that looks delicious you’ve really sold me on the pad Thai!

I love pad thai and so does one of my friends. Since we both love to cook, I think it’d be a fun, challenging recipe to tackle together. Thanks for sharing the idea of cooking together with friends. Typically we just prepare a meal and invite the other over… so this will be a fun thing to try!

Thanks Erin. Link all fixed.

what a great idea! one day when i am out of toddler + baby growing phase….
that pad thai looks delicious!

oh thank you! this recipe comes at the perfect time as we’re obsessed with the pad thai around the corner and need to duplicate it.

My first reaction was “where’s the vegetables?” After all, I made Pad Thai last night from a Food52 recipe that was completely inauthentic but loaded with green things. But I get it, I really do. It’s a Project. We’ve done the same thing with friends and sushi–and potstickers. The insanity is part of the plan.

This list of ingredients is not as challenging as the last authentic pad thai recipe I found, which asked for a whopping 30 ingredients (now that would be a challenge!)

Cooking with friends is such a fun concept. When I entertain I almost always make a DIY bar of some sort (either for the appetizer, the main or the dessert – but not all three!) and everyone always has so much fun working together in the kitchen.

You and your ideas are Pulitzer worthy to me! Congrats on the latest accolades!
(PS – We’re having Chicken with Bacon-y Brussels Sprouts tonight for dinner. Though its no pad thai, recipe was followed to the letter.)

Sigh. Someday! I’m still in the dinner party phase with guests in the age range of 6 months to 6 years old. We’re lucky if we eat 🙂 I look forward to evenings like this!

Love it! We do lunches that way … we all take turns hosting, the host pics the theme and treats the other girls. It always takes us SO long to prepare, because we always go overboard in our selections — but so fun to bond that way!

Thanks for the inspiration. This was great, real pad Thai – even without the radish, the bean sprouts, and subbing scallions and some minced garlic for the garlic chives!