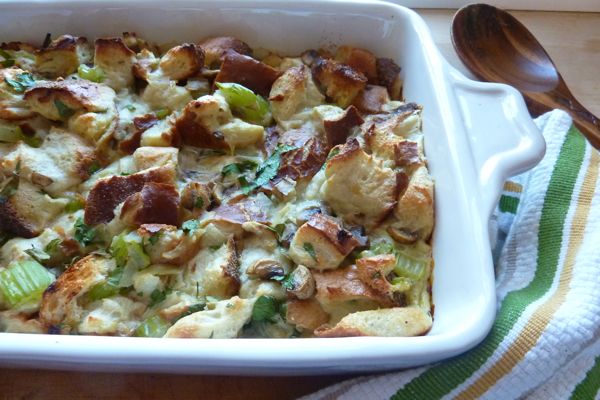 Growing up, the stuffing of choice at our Thanksgiving table was always Stovetop. I remember looking at a forkful of it when I was in high school and wondering “What is stuffing? What is in there?” But it tasted so salty and herby, that I certainly didn’t question it for more than a second. (Plus, this is the 80s we’re talking about here, so in general no one was really questioning anything about the food they were putting in their mouths — at least not in my corner of the world.) But once I was a grown-up and responsible for things like mortgage payments and Thanksgiving side dishes, it occurred to me that stuffing was maybe something I could try to make from scratch, so I went in search of a recipe that could deliver on my (admittedly modest) Stovetop-ian expectations. I found it two Thanksgivings ago with this Martha Stewart recipe. It was the perfect Starter Stuffing. Basic, easy, nothing fancy, seemingly begging for personalizing and riffing. I am throwing apples and sausage in it this year and hoping for the best.

Preheat oven to 400°F. Heat half a stick of butter in a large, deep skillet over medium heat. Add 2 small onions (chopped), 6 stalks celery (chopped), salt and pepper. Cook until vegetables are soft, about 15 minutes. Add 1 pound assorted mushrooms (quartered). Cover and cook until they release their liquid, 5 to 7 minutes. Uncover and cook another 7 minutes. Transfer to a bowl and let cool. While it cools, cook 2 links sweet Italian sausage (casings removed) in the same skillet over medium heat, breaking up meat with a fork.

Once meat is cooked, add to the onion mixture in the bowl, along with 2 loaves of Italian bread (in pieces, about 12-16 cups total), a 15-ounce can of chicken or vegetable broth, 1 bunch parsely (chopped), 3 eggs (lightly beaten), and 1 apple (peeled, chopped into chunks). Add mixture to a baking dish, cover with foil and bake for 25 minutes. Remove foil; bake until golden, about 20 more minutes.

I saute the apple chunks w/ the carrot/celery mixure. And use day-old cornbread instead of italian. But otherwise, that’s how I make it too; and it was PERFECT last year. Hoping I can repeat.

These recipes are really helpful. Thank you!

My husband loves Stovetop…I mean LOVES it. He doesn’t understand why stuffing has to be so fancy with fruit, nut and sausage (even being a sausage fan) mixtures. However, this recipe looks just simple enough to appeal to him while allowing me to break away from the boxed food section of the store. Thanks!

stuffing is my fav

OMG this looks so yummy

Hi all!! .!! Happy Thanksgiving! 🙂 🙂 🙂
Thanksgiving is one of my favorite holidays, and each yr I like to get into the mood-extend the holiday, as it were-by reading “Thanksgiving novels.” And in addition, most of these stories are mostly about friends and family, about coming together to heal old hurts and giving them thanks for the gift of love. … =
You Are Better Off Today Than You Had been 5 Yrs Ago?

I realize I am commenting on an old post – but planning to make this for Thanksgiving this year and wondering if it could be made ahead of time? Or would it be better to just make the onion/celery/sausage part ahead and then mix it all in before putting it in the oven on the day of?

I am a decent cook, but timing is what always gets me, so anything I can do ahead of time is key!!

Thank you for helping me get through cooking my first thanksgiving meal!! Stuffing and potatoes were great. Confession: our butcher told me to brush crisco on the outside of the bird and I did….it was incredible! Brown and crispy…

Before dinner, I gave each person a card with the name of another dinner guest on it and they then wrote down what they were thankful for about that person. We then read them…super sweet. Thanks again.

Looks delicious! How many people will this serve?