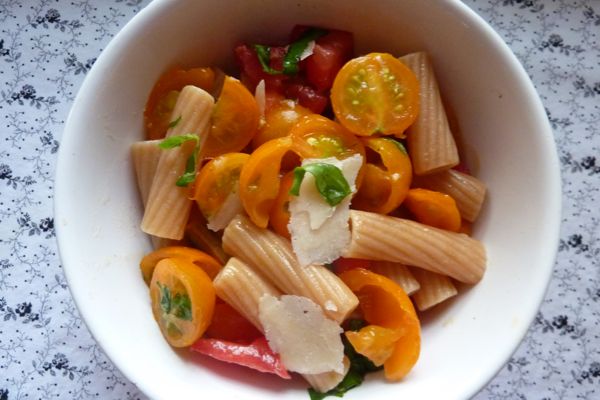 When I was in my twenties, I was obsessed with Gwyneth Paltrow. I was 25 and feeling lost career-wise when she had her first real star turn in Emma. I saw the movie opening weekend and read any profile of her that I could get my hands on. Every time I finished a story, I felt like I was in 6th grade all over again — eyeing the popular girl from afar consumed by an envy I couldn’t completely understand. If only I could find a career as creative and as fulfilling as Gwynnie’s! I still had that before-30 belief that if I just worked a little harder then maybe I’d still have a shot at being a movie star and going to the Oscars in a pink Ralph Lauren frock. (Any professional achievement that happened after 30 in my mind didn’t count. At that point it seemed expected, un-special.) The fact that I could barely give a wedding toast without panicking for weeks leading up to the big day, or that I hadn’t acted since I played Adelaide in my 6th-grade production of Guys & Dolls were small details to be worked out later.

When I turned 30, two things happened. I was hired at a start-up called Real Simple, where I was somehow given permission to edit essays by writers like Ellen Gilchrist and Katharine Weber in the morning and, in the afternoon, scribble my red pen all over manuscripts about garlic and corkscrews and cookbooks. There was no way that the cast and crew of Shakespeare in Love was having as much fun as I was. But by that point it almost didn’t matter — because the second thing that happened to me that year was that I had my first baby. The search for meaning (professional and otherwise) was over.

Accordingly, my Gwyneth obsession waned, too. But a few years ago I read a profile of her in Vogue. I can’t remember what movie she was promoting this time — maybe it was something tied to her lifestyle website, Goop — but I will always remember what she told the interviewer about cooking dinner. She was a mother at this point and cooking healthy, real food for her family was a priority.  Her advice was to keep the repertoire simple. Learn how to make seven (Se7en?) meals, make them well, make them over and over again until they become second nature, until you can just walk into your kitchen and pull one out of your back pocket. (OK, maybe I did a little editorializing on that last part.) I think about this all the time when I make the pasta recipe below. It’s so obvious and so simple that there’s a good chance you have it in your dinner rotation already. But for those of you intimidated by cooking or not sure where to start, this is the perfect recipe to build a repertoire on. It is unbelievably delicious and so easy to pull out of your back pocket no matter what madness is happening in the house. And who knows? Maybe Gwynnie is making it tonight, too?

Rigatoni with Tomatoes
If you are feeling indulgent, it’s easy enough to add in a few dollops of creamy cheese (like ricotta or goat cheese) when you toss the pasta and tomatoes together. If you do this, reserve about 1/4 cup of hot pasta water before you drain pasta. Adding a little hot water to the cheese helps it coat the pasta more evenly.

Chop or slice 3-4 cups of fresh tomatoes into bite-size pieces (any kind will do so long as they are fresh) and add to a large bowl. Add the zest of one lemon. Cook 1 pound of whole wheat rigatoni (or whatever pasta you have) according to package directions. Drain. Add a couple good glugs of olive oil to the pasta pot and cook 2 minced garlic cloves for about 1 minute. Toss in pasta, tomatoes, and salt and pepper to taste.  Serve in bowls and garnish with a lot of Parmesan and some chopped fresh basil.

Great post! I have been thinking about just this idea lately, focusing on having a solid repertoire of good dishes rather than always casting about for something new.

I check your blog daily and always come away enriched. Thanks!

I was just finishing up a post when my husband grabbed the mail and tried to read it through the envelope. Then he said, “Someone sent you a postcard that says, ‘Make dinner not war.'” What a fun surprise; I had kind forgotten I had requested it. Thank you.

I’m so glad you received it! For anyone else who registered for their bumper sticker before the June 26 deadline, you should have yours this week, too. I finally finished up the mailing. Thanks for your patience.

Great story! I am 25 and, daily, I feel lost about my career and life in general. It’s nice to know it gets better:)

A friend sent me this post, my introduction to your blog, and you had me at Gwyneth. We must be the same age because I was similarly inexplicably obsessed. Hilarious. And a wonderful way to frame this post. I will be making this dish almost immediately.

Funny post! I completely relate. My friend and I used to say “What Would Gwyneth Do?” when pondering any question about life, love, family, career, clothes, style, etc…

Trying this dish tonight! So excited b/c I have alot of fresh herbs and fresh cherry tomatoes growing on my patio. Sounds like a “keeper”…