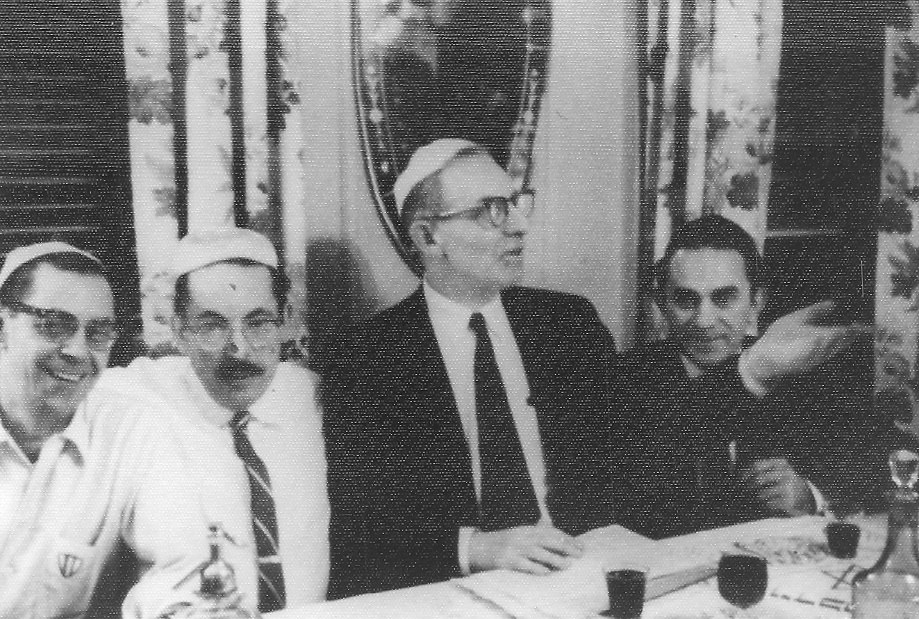 The First Best Thing my father ever came home with after work was, by far, a Ford Granada. It was powder blue, four doors, with a white vinyl top, and when I hopped on the kitchen counter to peek out the window that overlooked our driveway, I remember saying to myself, Is this real? Did my father just pull into our home with a new car? No matter that the Granada epitomized the darkest days of late-70s American car design. This sedan was ours, it was new, it beat the hell out of our rickety old white Pontiac wagon, and in the big huge world of two siblings, two parents, and my kindergarten class, news didn’t get much more monumental than that.

The Second Best Thing that my father ever came home with after work was the soundtrack to Grease. My sister and I were playing in a back room with some of the neighborhood kids and I knew we were in for a treat when I saw the Sam Goody bag tucked under his arm. We had already seen the movie and knew the words to all the songs but there was jumping and shrieking when he made the dramatic reveal.  The fact that I was seven years old and obsessed with a movie where pregnancy and sex are routinely discussed, and that now, as a mom, I can’t imagine screening it for my 8- and 10-year-old, well, see above re: late 70s.

The Third Best Thing that my father came home with after work (which is another way of saying “for dinner” because he was always home in time to eat) was a freshly baked challah. Unlike the First and Second Best Thing, this was a gift I could look forward to fairly regularly. On his one-mile walk home from the Larchmont train station, Dad would swing by our local bakery – the one with the display case of chocolate éclairs and Napoleons and a roll of baker’s twine hanging from the ceiling —  and pick up a loaf. On most nights the challah was of the plain braided variety. But on special nights, it was a challah that had been studded with plump golden raisins. As soon as Dad handed me the loaf in the waxy bag, I’d slice up a still-slightly-warm piece, spread a schmear of Breakstone’s whipped salted butter on top, and let the happiness wash over me. Life was about as good as it could get for a girl wearing a velour warm-up suit.

Much as I like to think my delight was the main reason he brought home the bread every night (remember: my Dad was the philosopher who coined the famous food-happiness concept of “Absolute Value”) the ritual had actually been in place long before John Travolta was in style. Every Sunday morning as a teenager, my dad and his father, Phillip (who is pictured above with his brothers at his family table and who, like all my grandparents, died before I was born), would walk north from their 165th Street apartment in the Bronx to their local bakery on 167th Street. During the week, my grandfather was up and out the door before anyone was awake – he worked as a furrier in the Garment District – but on Sundays, he and my Dad would head out to do the Crucial Sunday Morning Job of selecting breads and danishes for the family breakfast. They’d talk about the normal stuff — school, my grandfather’s job — but the one-on-one bread-gathering mission was a reason to look forward to Sunday. As my dad recalls, it was the first time he felt like a grown-up.

The story of this ritual has taken on a misti-ness over the years, especially as I grow older and realize how valuable these select memories are and how crucial it is to keep the rituals associated with them alive. We do not have regular Friday night Shabbat dinner in my house like my father did, and in truth, if my sister didn’t organize Rosh Hashana (and Yom Kippur and Passover and Channukah) dinners every year, I’m not so sure I’d get them in the calendar myself. But on the days of the year that do not qualify as High Holy Ones, I somehow manage to feel connected to something bigger than myself. Like when I braid my first homemade challah with Abby using my second cousin Ronnie’s recipe (that’s my maiden attempt up there); or when I use a knife to peel an apple in one long strip, just like my mom told me her father used to do. Or when I secure the recipe to my Aunt Selma’s famous sweet-and-sour meatballs that she served at every family gathering growing up. Or back in 1994 when Andy and I had just moved to New York, and we’d meet after work at the corner of Smith and President Street in his up-and-coming Brooklyn neighborhood of Carroll Gardens. I can still see him walking up the block wearing his pleated khakis and Joseph Aboud tie, carrying his messenger bag and, yes, a loaf of crusty Italian bread from Caputo’s on Court Street. We’d head another two blocks west to Andy’s Hoyt street rental – a four-story brownstone with full garden, eat-in kitchen, all of which cost him and each of his three roommates $400 a month — and that bread would be the start of dinner. 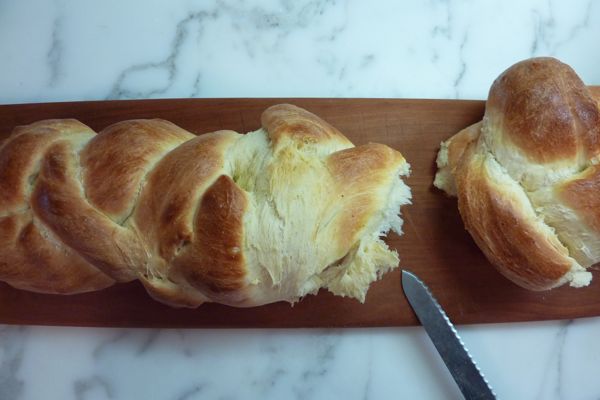 Please head over to my second cousin Ronnie Fein’s website for the incredibly clear Challah recipe as well as a photograph of the challah without a weird bulge in the middle. It was my first attempt — cut me some slack! If I had read her braiding tips first, perhaps this wouldn’t have been a problem. (Also: forgive me that my bread is not round for the holidays.) Ronnie is also the author of Hip Kosher: 175 Easy Recipes to Prepare for Today’s Kosher Cook. Happy New Year everyone.

That looks sooo delicious. I might try my hand at making one…

Great! You just had to go ahead and make me cry first thing in the morning. 🙂 Seriously, I love this story. My father did a similar thing in my house with fresh baguettes from a fancy bakery in our town.

thank you thank you!! I have been looking for a good challah recipe to try, as this has become my favorite bread of late, especially for french toast!!

I love making bread, I find there to be something very satisfying about baking a loaf of bread, very pure.

What a beautiful (and funny) story! I fondly remember going to the neighborhood bakery with my grandpa every week for two loaves of bread. I’d always get a cookie but never loved it as much as I loved bringing that bread home and eating slice after slice lovingly buttered by my grandma.

I would love to have the recipe for your Aunt Selma’s sweet and sour meatballs to go along with the challah!

Jamie – that’s too easy. Here’s your test: stuffed artichokes at the Red Rose?

What a great memory to share, and so wonderfully told.
“Life was about as good as it could get for a girl wearing a velour warm-up suit.” Love that line.

On Saturday morning, the kids (4 and 7) go and get Zopf – much like challah and see http://www.saison.ch/de/rezepte/zopf/detail/ for pic – from the lokal farmers’ store. Oh the joys of smalltown life!

Oh, I love this post. My father is an Italian Catholic and grew up on 139th Street in Manhattan, but his stories sound very similar — down to the fact that he worked not in the Garment District but as a stock-boy for Saks Fifth Avenue. Thank you for spinning this tale and sharing a bit of your heritage with us. I can’t wait to try the recipe!

Oh my goodness, my daughter and I made this this afternoon (following Ronnie’s recipe and watching YouTube for 4-strand braiding help) It came out wonderful but GIGANTIC! There’s going to be a lot of challah toast, french toast, etc in the next few days!

This is a beautiful post and tribute to your dad and childhood memories through food. I understand how you feel too. I cannot wait to make my grandmother’s apple cake for Rosh Hashanah dinner tomorrow night. It’s a tradition that cannot be broken. And you have now inspired me to make a challah.

Beautiful story. Baking in general is my “page turner” but that challah is beautiful! Happy New Year!

You just made me all nostalgic for Caputo’s… and wondering why we left Carroll Gardens in the first place. (Oh wait, I remember.. it was WINTER. That’s what did it.)

Wonderful Jenny! You always write something emotionally and recipe-delicious. It brought back memories of my own side of the family to see the photo. I remember those men. That photo, taken so long ago, is how I think of them. Thanks for this wonderful story. Btw, this does make a huge bread, but in my recipe I say that it can be halved for two smaller loaves.