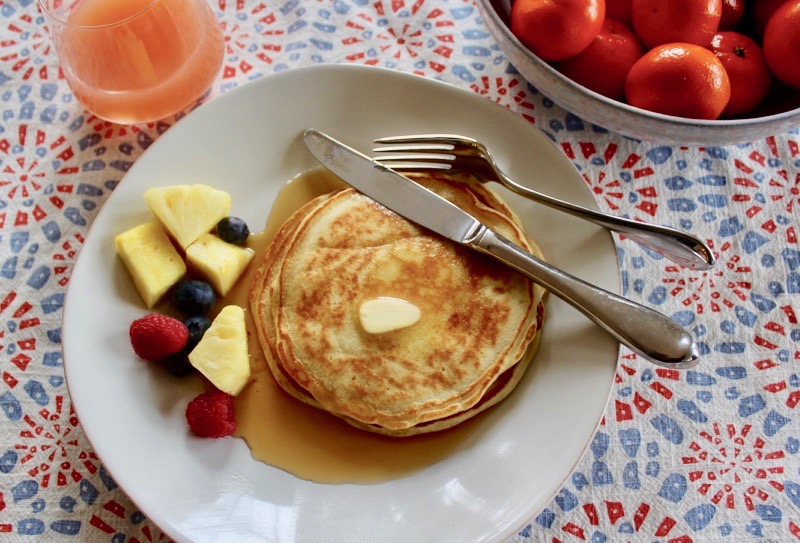 And now, introducing the latest entry in DALS’s Family Rituals Series, a ritual I dug up in the most unlikely of places: Bruce Springsteen’s autobiography, Born to Run. I think I might’ve mentioned to you that I was reading and loving the book — there were some major voids in my Springsteen education — and imagine my delight to find out that the guy whose Levi’s-clad butt was Scotch-taped to my childhood bedroom wall cherished a family ritual that involved The Boss cooking for his kids. Here’s the section of the book where he discusses how his wife (and fellow band member), Patti Scialfa made him do it.

Long ago, I’d promised myself that I would never lose my children in the way my father had lost me. It would’ve been a devastating personal failure, one for which I would have no excuse, and I would not have been able to forgive myself…

…Once they were here, Patti and I knew our children would be our first priority. All of our tours would be booked around school schedules, childrens’ events, birthdays, and because of Patti’s insistence, planning, and dedication, we made it work. I worked hard not to be an absentee dad, but in my business that’s not always possible and Patti picked up the slack. She also guided me when she thought I was falling short. For years, I’d keep musician’s hours, a midnight rambler: I’d rarely get to bed before four a.m. and often sleep to noon or beyond. In the early days, when the children were up at night, I found it easy to do my part in taking care of them. After dawn, Patti was on duty. Once they got older, the night shift became unnecessary and the burden tilted unfairly toward the morning hours.

Finally, one day she came to me as I lay in bed around noon and simply said, “You’re gonna miss it.”

She said, “The kids, the morning, it’s the best time, it’s when they need you the most. They’re different in the morning than at any other time of day and if you don’t get up to see it, well then…you’re gonna miss it.”

The next morning, mumbling grumbling, stolid faced, I rolled out of bed at seven a.m. and found my way downstairs. “What do I do?”

She looked at me and said, “Make the pancakes.”

Make the pancakes? I’d never made anything but music my entire life. I…I…I…don’t know how!

That evening, I queried the gentlemen who was cooking for us at the time for his recipe for pancakes and I posted it on the side of the refrigerator. After some early cemetlike results, I dialed it in, expanded my menu and am now proud to say that should the whole music thing go south, I will be able to hold down a job between the hours of five and eleven a.m. at any diner in America. Feeding your children is a great act of intimacy and I received my rewards, the sounds of forks clattering on breakfast plates, toast popping out of the toaster, and the silent approval of morning ritual. If I hadn’t gotten up, I would’ve missed it. 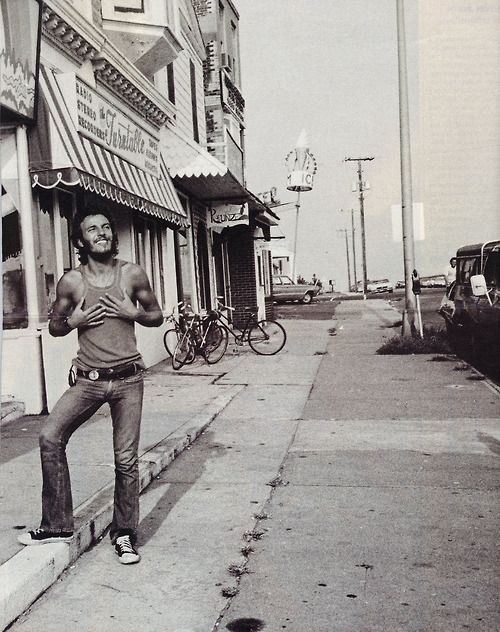 Amazing, right? And I know this is the place where you’re supposed to see a photo of Springsteen flipping flapjacks with his young kids, but the truth is, I’m essentially using the whole pancake thing as an excuse to show you this photo. From what I gather, it was shot in 1973 on the Jersey Shore just as he was on the cusp of real fame, and I can’t get over how amazing it is and how freaking cool Bruce was in the 70s. I wasn’t a huge fan when I was younger — like the good little suburban girl I was, I didn’t start listening to his music until the mid-80s, when my sister and her best friend, Lauren monopolized our shared bedroom boom box with “Thunder Road” and “Born to Run” and, naturally, the entire Born in the USA album on repeat for two straight years. But after reading his book, I started to rediscover him album by album, watching and listening his songs on YouTube and Spotify as I progressed from chapter to chapter. This is not a new concept, but when you know the backstory behind an artist’s life, you see and hear their work differently. It was so cool to pull up “Born in the USA” on Spotify and listen to the song not as I have for the last three decades — which is to say, barely even hearing it anymore — but to hear an angry Bruce singing for the guys he grew up with who fought and died in Vietnam. (A motorcycle accident gave Bruce the excuse he needed to dodge the draft himself.) So anyway, take a page of out the Springsteen book and make a batch of pancakes for your kids this weekend — and queue up Nebraska or Darkness on the Edge of Town while you’re at it.

Buttermilk Pancakes
No, this is not Bruce’s recipe, but it is my go-to pancake move whenever I have leftover buttermilk lying around.

In a large bowl, combine the flour, sugar, baking powder, baking soda, and salt. In a separate bowl, lightly beat the eggs, buttermilk, milk, and butter. Add the liquid ingredients to the dry ingredients all at once, stirring just to blend. The batter should be slightly lumpy and quite thick. Let the batter rest for 5 to 10 minutes.

Heat a lightly oiled griddle or heavy skillet over medium-high heat. Portion 1/4 cup measures of batter onto the hot griddle, spacing them apart. Cook for 2 to 3 minutes, until bubbles cover the surface of the pancakes and their undersides are lightly browned. Gently turn them over and cook for about 2 minutes more, until the other sides are browned. 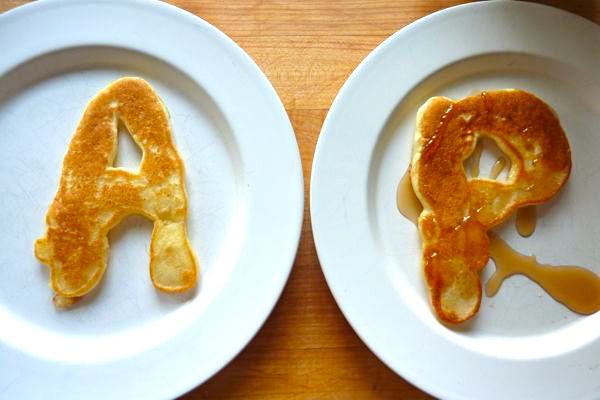 .
Throwback to when making “initial pancakes” was all I needed to do to feel like a good mom.

I’ve been a big Boss fan since the late 70s! But, who is this “gentleman who was cooking for us”? everytime you think, “look, celebrities are just like us,” you find….a private chef. boo!

Anyway, I’ve been using the pancake recipe from HTCE (with an added tsp of vanilla) and it is a solid workhorse! I’ll never buy Bisquick again 🙂

I hear you on that one @Awads but at least he was honest about it…and kept it up on his own. (As far as we know, but I’m going to choose to believe he did because I need to believe in something today.)

Yes, that recipe in HTCE is a good one, too, especially since I always have the ingredients I need to make them. This one calls for buttermilk, though, which is not something I consistently have in the house. I LOOOVE buttermilk pancakes.

If you need a buttermilk substitute- I have great luck with a bit of white vinegar in regular milk. Let it set/curdle for 10-30 mins. Makes great pancakes!

I love this! I love Bruce. I come here for the recipes, but the books and media recommendations are such a bonus. I mean, Nobel? So good.

I have to say, if I could have a gentleman cook for me, I certainly would.

I love this. My husband had to kind of drag me out of bed SUnday to cook for three teenage ladies. He manned the pancake griddle, the sausages, and the eggs. I prefer waffles so I covered the waffle iron and the bacon was done in the oven. The girls always enjoy when we make breakfast.

Julia Turshen’s sour cream pancakes with roasted fruit are a revelation. I got the book two Christmases ago and I make them all the time. My two year old loves them so much that you can’t leave your plate ungauarded around him!

I love this story, especially because my husband is the pancake guy in our house too. When he’s away on weekends my kids say things like “do you even KNOW how to make Pancakes?” We also never buy buttermilk, just make our own with a dash a vinegar in a cup of milk, let it sit for 5 minutes and you’re golden.

Thanks for the info!

I was equally as smitten by that part of the book too (which I devoured…get the food reference?!). I came away from the book with even greater appreciation for him as an artist, and also for him as a parent. It cannot be easy to be “present” for your kids when you also put on 4 hour concerts around the world on the regular, but if he can find meaningful ways to do it, so can all of us. In my house, pancakes are incredibly meaningful too.

I loved his book, too. I don’t think it’s accurate, however, to suggest he dodged the draft. He went to his physical and they didn’t take him. I expect if he’d passed, he would have gone to Vietnam along with many of his friends.

Lisa – Yes, you’re probably right that the word “dodger” is not accurate. But based on his story, it sounded like he was willing to do almost anything to get out of it and was extremely grateful that he had a legitimate excuse before it got to that point. Also, later on when he connects with Ron Kovic to help raise awareness and money for Vietnam vets, he called himself a draft dodger — can’t remember his exact phrase but something like “all this from a world class draft dodger,” which I thought was funny.

I really like pancakes. I’ll cook for your recipe.

A former often drunk neighbor in a tent tiny apartment building just about destroyed Bruce’s music for this proud Jersey girl, but this story cements my high opinion of him as a human.

I love this so much. Oh, Bruce. Oh, Patti! Oh, initial pancakes…