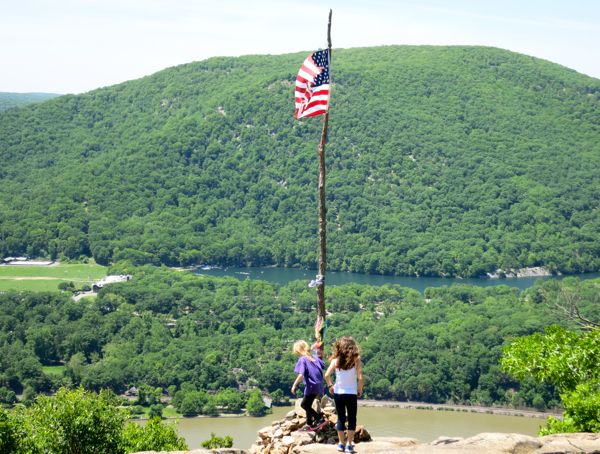 We’re not a camping family. Or maybe, to be fair, we’re not camping parents. We’ve done it a couple of times, for one night, and I wouldn’t say we excelled at it. I’d say we survived it. The ground was too hard. The birds were chirping too loudly. Our sleeping bags were too hot, but our ears were too cold. The bugs were bad and refused to keep a respectful distance. We went to bed smelling like lakewater and campfire, and woke up smelling like lakewater and campfire — and we would have done something about this had there been a shower within a mile of our campsite. Also, the bottom of our tent was sandy.

Camping may not be our thing, but we do love to be outside, and to hike, and there’s no day trip our kids love more than the walk up Anthony’s Nose, about an hour north of our house. We started doing this hike when the kids were in backpacks, unable to make it up themselves, and ten years later, here we are — the parents — calling for water breaks and bringing up the rear. You can have your dafodils and your exploding magnolia trees and your thick golden blankets of pollen: In our house, nothing says spring has sprung like a trip up Anthony’s Nose on a beautiful warm day, the sky so blue it looks pixellated and the river, muddied from spring storms, churning its way south to New York City. After admiring the view, we sit and have a picnic on the summit, perched on a giant, sloping slab of granite, overlooking the Bear Mountain Bridge with what seems like the entire Hudson Valley sprawled out before us. Yesterday, we sat out there for an hour and had sandwiches made from weekend leftovers — breaded chicken breasts, sliced on the bias, with Duke’s mayo; grilled leg of lamb, sliced thin, with a little dijon; some bulgur salad with feta, tomatoes, and mint — as a DIY American flag, which was tied to a fallen tree limb, hung with what looked like Buddhist prayer flags, and held upright by a pile of rocks, flapped in the breeze. Memorial Day! We picked out some landmarks, including the nuclear plant at Indian Point and the ice rink down below us, at Bear Mountain, that we go to during the winter, and from which we always stop and look up and say, “Look, there’s Anthony’s Nose. See it? Those rocks up there?” And as we say that, we’re usually freezing our butts off, longing for that first warm day when we can get up there and have our picnic and feel the sun and watch the summer roll in. — Andy

We do a lot outdoors, but if I take a genuinely honest view, we enjoy the anticipation and reflection more than the actual doing. S’mores end up being enjoyed with bits of bark, ants climb on the fruit and the bees swarm, but oh the memories after a shower.

This sounds so fun! I can’t wait til my kids are old enough to go on a trip like this. I might have to haul my preggo butt out on a few short hikes with my 3 year old before the new baby comes.

We LOVE Anthony’s Nose! It is the perfect hike for kids just learning how to hike. And now just cuz I”m feeling nostalgic, I’m going to have to convince my almost leaving for college senior to do it with me this weekend. Thanks for the reminder! It’s a quick drive from where we are and I don’t know why we don’t do it more.

That sounds like so much fun. My husband and I love taking hikes and bringing along a picnic lunch!

You comment on camping reminds me of the last time I went camping…the temperature dropped unseasonably and we only had our summer sleeping bags. My big toe was so cold, I thought it might fall off. TODAY, it is a very funny story…then, not so much.

Hiking and picnic lunches? Totally my thing. Staying overnight? Check me into a hotel, please.

What a beautiful family day and a perfect picnic lunch!

Understand perfectly “not a camper” – BUT, I did become an RVr – it is still hard to acknowledge that! It was supposed to be a short time thing due to an opportunity but I found I absolutely love having a kitchen, indoor plumbing and a real mattress bed in a rolling house that I can plug in or not (generator). And my pets go with. So does my work. I’ve had the darn thing for 8 years now. When I first started I didn’t see as many families as I do now.