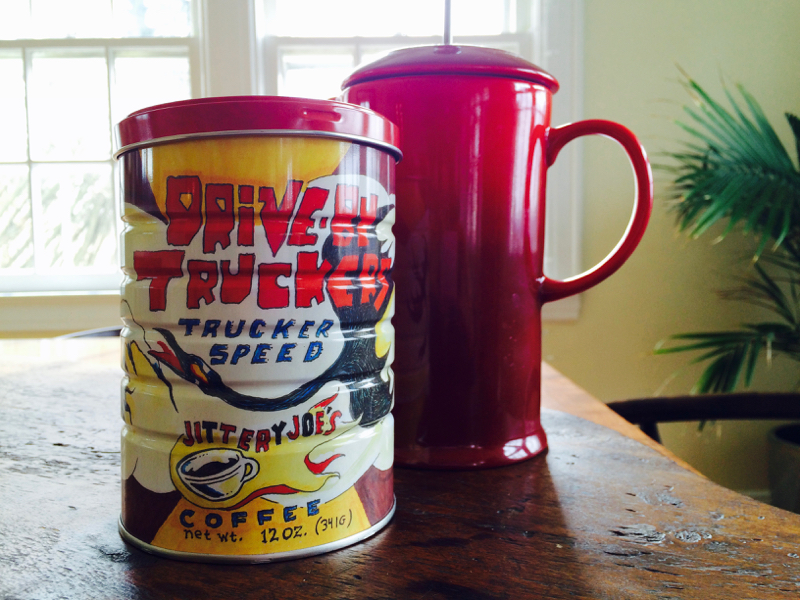 This is not a sponsored post. In other words, no one paid me a cent to write this. No favors were exchanged, no upgrades scored, no swag bags received. The truth is, I should be paying someone to write this post — specifically, I should be paying the members of The Drive By Truckers. I’ve chronicled my existential debt to these guys an embarrassing number of times on this blog over the years, but I’m going to say it again now, and probably not for the last time: I love them, love their music, love their whole deal. And yeah, I love the idea that they are teaming up with Jittery Joe’s in Athens, Georgia to make some coffee. (“Trucker Speed,” they named the roast. Which, come on.) If you know someone who is a fan, or someone who likes to rawk now and then, or even someone who hates coffee but wants the world’s best pen holder for his or her desk, this would not be an unwelcome gift, I’ll just say that. When it showed up on our doorstep, and I opened the box, Jenny took one look at my face and said, “You better be putting that on the blog.” Twist my arm. — Andy

Love the Truckers! Just saw Jason Isbell last Saturday night – one of my favorites for sure.

Artwork by Richmond, VA artist Wes Freed – amazing! I would buy this for the can just to look at on my kitchen shelf. I would be more caffeinated than ever. Thanks for sharing.

OMG – my daughter would freak out for that !

Never heard of them..
But really like the coffee can!
Thanks for sharing this post though.
Hugs!

hope you have a good day!

AND Jit Joe’s coffee is delicious. I went to law school in Athens and whenever I go back, I buy a few tins of Jittery Joe’s coffee.

I just won my wedding anniversary. Thank you! (What, anniversaries aren’t best gift competitions to other people? Weird.)

Seeing DBT tonite in DC at 9:30 club. We’re not even coffee drinkers but definitely ordering some Trucker Speed. Thanks for the heads up Andy!

couldn’t resist the can. ordered two – one for me, one to give. thanks

So glad to see that “Jittery Joe’s” is THE Jittery Joe’s. I was worried for a minute there that someone had gleeped their name.