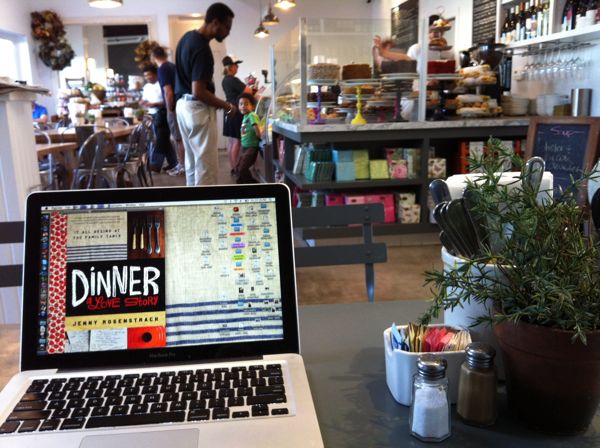 What is my statute of limitations on blaming Sandy, the Election, Halloween, and Thanksgiving coverage for my delinquency on…everything? I am a terrible person for not expressing sufficient gratitude to my LA Team on the Ground until now. If you recall, I was heading out West for some business and decided to use it as an excuse to try to connect with my California readers. When I asked you guys here on DALS what to do and where I should go, I received some of the most generous invitations — even to people’s homes and book club meetings — and wound up having a little coffee talk at Thyme Cafe & Market in Santa Monica. (It’s shown above and is the kind of warm, bustling center-of-the-neighborhood place I walk into and think “Why can’t I have one of these on my block?”) A big thanks to Maire Byrne, the owner, who provided muffins and long tables, and especially Clare, my conduit who put the whole thing together. I handed Maire a stack of “Make Dinner Not War” bumper stickers and signed bookplates, so if you live in the area, and are looking for a place to buy Dinner: A Love Story for your two dozen (three dozen?) best friends this holiday, I’d head over there. Bumper stickers are free with purchase.

Also thanks to Courtney and Elizabeth who pointed me in the direction of Chevalier’s, where I signed later on the afternoon. That charming little bookstore in the middle of the very Mayberry-ish Larchmont village, is also in possession of a stack of autographed copies. Please support them!

While I was in LA, I was lucky enough to stay with my childhood friend Laurie (for book owners, this is Chicken-Pot-Pie Laurie) who, among other things, outfitted me with her clothes for all my various meetings and appearances, treated me to what I think may be Breakfast of the Year (Farmshop at the Brentwood Country Mart), and let me crash her insanely rad Santa Monica bungalow for three days. If that wasn’t enough, each morning, she revved up the Hurom and made me one of these…. 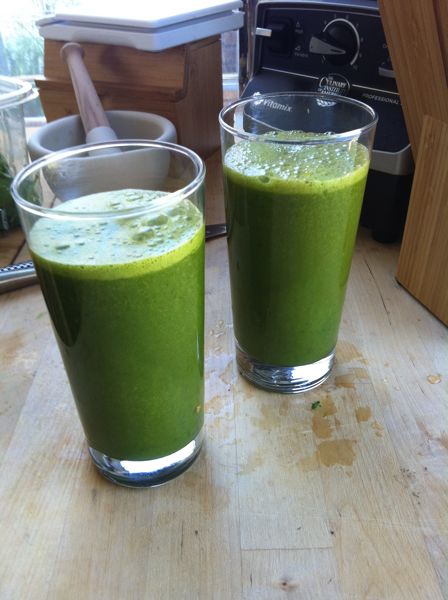 …which was comprised of ALL of this… 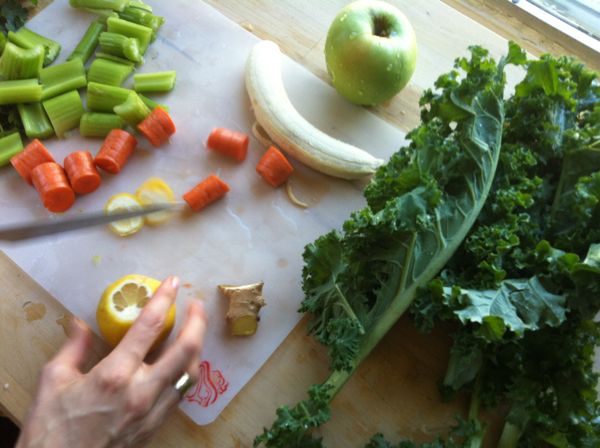 !!!!!!!!!!! I don’t know what I liked better — the green drink or the idea of the green drink — but I do know that as soon as I had one sip, my trip to California felt complete. (For juicer owners, Laurie basically just added what you see above: one apple, one carrot, one stalk of celery, 1/2 lemon, one bunch kale, a 1-inch-ish piece of peeled ginger, one banana.) Another benefit? When I started the day with a green drink, I had no guilt at all when I finished the day with an Umami Burger.

I wish I could figure out how to make a burger like that. FYI: I went with “The Hatch” — green chilies and cheese.

after farmshop, i hope you stopped by sweet rose creamery to get some ice cream.

I start just about every morning using my juicer!! Did Laurie use a blender for the banana? Only reason I ask is that my juicer specifically says not to juice banana or avocado because it will clog.

The Hurom Slow Juicer can handle both hard and soft fruits and veggies, so I don’t have to blend the banana. But you do have to cut your celery and carrot into 2″ pieces or they will get stuck. I use it every day!

Come visit L.A. again soon. And per my daughter, “bring your girls next time”.

Glad we got to see you!

—The Person Who Brought Her Baby to Thyme