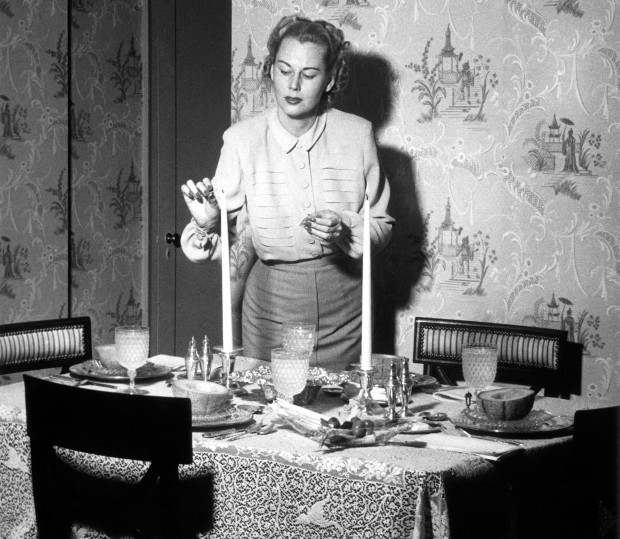 Our mothers are both 70-something. They both wore shoulder-padded silk blouses to their full-time jobs in the 80s; they’re both skeptical of salt that is not iodized and turkeys that are heritage; and both made it clear when we were growing up that family dinner – which, yes, was centered on an old-school Italian repertoire, and supplemented by a little Stouffer’s now and then — was a given. They taught us well: In case you couldn’t tell, prioritizing a shared meal at the end of the day with our kids (only without the frozen Salisbury Steak) has stayed with us. What other kitchen wisdom did Jody* and Emily* impart? In honor of Mother’s Day, here is a partial list.
.
Set a Proper Table
Sure, most of us expect a little linens and a spray of roses on our holiday tables, but what about the other 363 days of the year? Sitting down to a meal with placemats, cloth napkins, and sometimes even fresh-cut flowers — as Emily does most nights — says to everyone at the table: This is a ritual that matters.
A Warm Dinner Plate is a Right, Not a Luxury
Our moms hail from an era where a good, hot meal was the elixir for just about anything – soccer loss, minor cold, catatonic depression. (Actually, maybe we do, too.) So why, Jody would like to know, would one serve a hot meal on a cold plate? She stacks her plates and warms them in the oven at 200°.
Call the Next Day
Gone are the days when people sent handwritten thank-you notes, via snail mail, after dining in someone’s home. But gratitude? That never goes out of style. It’s a lot of work to have people over for dinner, and we can’t remember a time when Emily didn’t pick up the phone the morning after to thank her hosts for all they had done. (Note: Texting or emailing a thank-you counts, too, but Emily has no idea what texting is.)
Keep Your Secrets
Fennel Seeds in the meatballs. Challah for the French toast. Peaches and blackberries in the cobbler instead of apples. Fresh bread for every meal. Cinnamon in the chili. Every family has their own “secret” food traditions, and it is our jobs to sustain them.
Serve Just Enough
Jody is famously stingy on the portions. (If we had to pick one story among thousands: In high school, she served my 220-pound line backer boyfriend a burger that fit in the palm of his hand. Okay, one more: she once had a single pint of ice cream for a party of nine.) It’s never been about calorie control – its that the idea of waste kills her. And yet she taught us something without even realizing it: Eat what you want, just don’t go crazy. Our one exception is entertaining. When people come over, you want the opposite. You want bounty.
Salad Does Not Need Lettuce
Emily was famous for her chopped (pronounced around the house as CHOP-id) salad. She had one of those low-fi, rotating choppers, and she would use it to dice red peppers, onions, carrots, cucumbers, celery, and whatever else she had in the vegetable drawer. Toss that with some Wishbone Italian? That right there is some crunchy goodness, and a dish we’ve updated and served to our kids countless times.
.
Finish the Meal with Fruit
Jody is 100% Italian, which meant that she wasn’t afraid of churning out some breaded chicken cutlets, meatballs, and lasagna. It also meant that after any carb-and-ricotta-fest, we didn’t need much more than a bowl of strawberries or sliced melon for dessert. It helped that Jody was a world class fruit-selector — squeezing, sniffing and shopping only in markets where she knew she could get the ripest melons and the juiciest apricots. (Coming next month, our fathers’ mantra: Finish the Meal with Chocolate.)
*Jody=Jenny’s mom; Emily=Andy’s mom
. 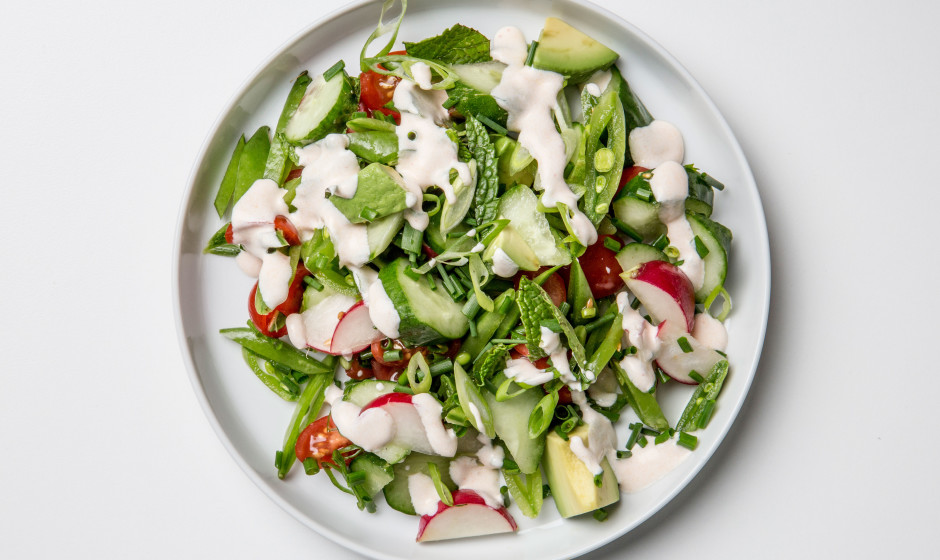 This is our “Providers” column for the May issue of Bon Appetit. Head over there for a modern take on Emily’s CHOP-id salad (hold the Wishbone), and while you’re there, check out these Nine Mother’s Day Gifts for Moms Who Already Have ALL The Pans. Photo credits: George Marks/Stringer (Vintage Mother Setting Table); Alex Lau (Chopped Salad)
.
What about you? What’s the best cooking advice you’ve received from your mom?

I once wrote to my Mom at Thanksgiving, thanking her having kept traditions going. I told her that at every holiday when I’m peeling potatoes for the big meal (which as a snotty teenager I scorned, as being pointless, excessive, and a burden), I see her hands peeling, I hear her voice, I’m in her kitchen again.
She’s been gone for over 25 years now. Still, I peel potatoes and I’m right back there with her.

Nothing good comes out of a can.
Laundry on Mondays
Baking bread on Tuesdays
Soup on Wednesdays
….to this day not a fan of sandwiches made out of home made bread. I never experienced Sliced Store Bought Bread or Kraft Dinner until I moved to first apartment far away from home.

She’s 83 this year and I doubt there is any bread on her counter or in her freezer that isn’t baked by herself. Not to mention the load of frozen veg from her massive garden.

This post is precisely what would get people into the kitchen, and why collecting family recipes is a must. Great work, and a wonderful homage to your parents!

Set a proper (okay, at least decent) table is my next goal. I’ve got the cooking-every-night thing down, but with three kids ages four and under, the table just gets things thrown on it that will help get the food into the mouths. This past winter I remembered to put a candle on the table a handful of times and it really did make dinner feel more calm, more comforting. Well, as calm as a dinner with three little kids can be 🙂

I loved this article, and many of your articles, but I take exception to one thing; there is no reason your 70-year old mother would not know what texting is. I’m 67, and I not only text, but am familiar with a lot of other processes that didn’t exist in my youth; I make a good living still as a graphic designer (on the computer), a field that didn’t exist until I was almost 40. That was condescending and ageist. However, I liked the article.

Thanks for the comment, Alex, but read that sentence again and I think you’ll see that we were speaking specifically about Emily not having any idea what texting is. (Which is not ageist, just the truth!) Nowhere do we say that 70-somethings in general don’t know what texting is. We would never say that, especially since I text with my mom (Jody) and dad all the time. Glad you liked the story.