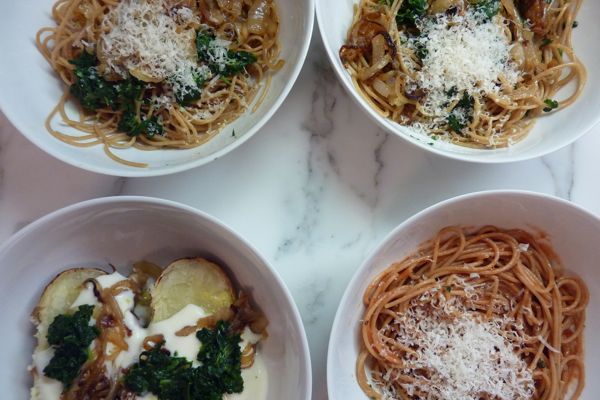 I think the surest way to ring the death knell on family dinner is to cook something different for every party present. It’s hard enough to get one dinner on the table let alone four, each of which may be greeted with groans or, worse, no comment at all. But considering that children (green-fearing, sauce-o-phobic, generally annoying children) are often the defining variable in the term “family dinner,” this can be a hard thing to get around. Luckily you are here, in the care of a family dinner expert, the author of not one, but (almost) two family dinner cookbooks, so pay careful attention to the hard-won, time-honored advice you are about to receive. The trick, I’ve decided, is to lock yourself into a state of extreme denial and then psyche yourself out with careful inner rationalizing every step of the cooking process in order to convince yourself that you are making one thing when in fact you are doing nothing of the sort. Behold last night’s dinner. I wanted — no, needed — my favorite ace-in-the-hole pasta: Whole wheat spaghetti with caramelized onions, spinach, and Parmesan. Even though Phoebe won’t touch pasta. Even though Abby loves pasta, but generally won’t eat this pasta unless it has a hint of sauce on it. (“Pink!” she commands.) But I plowed ahead anyway. Let me show you how it’s done. 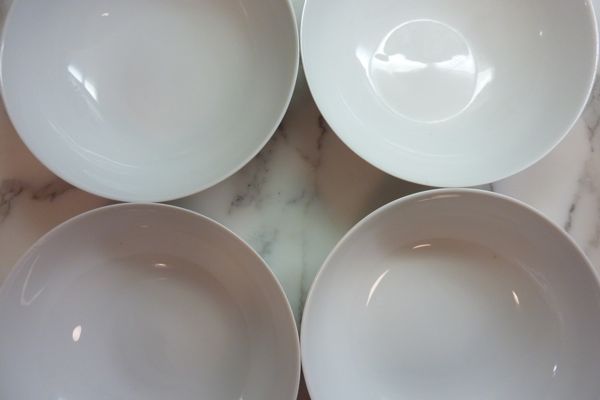 Psyche-out Moment 1: I set four identical plates in a grid. This immediately creates the promise (illusion?) of uniformity and order. 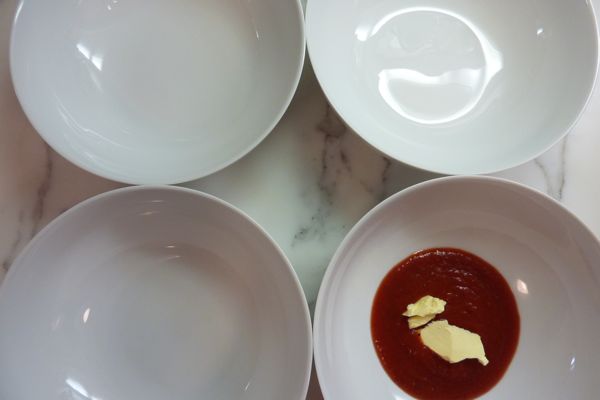 Psyche-out Moment 2: I earmark the lower right bowl as Abby’s and spoon in just the right amount of spaghetti sauce — and a couple hunks of butter. This can barely be called “customizing” since it takes under 10 seconds. 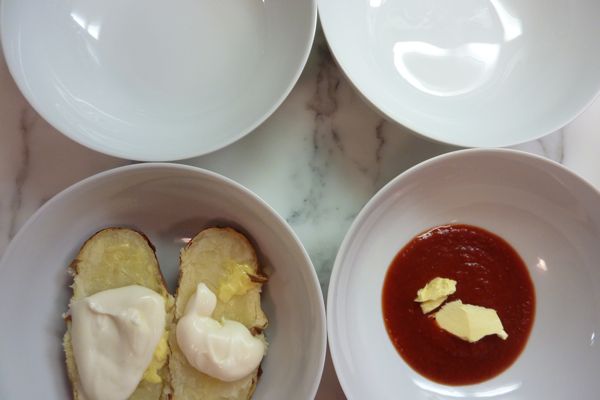 Psyche-out Moment 3: I earmark the lower left bowl as Phoebe’s. And while, yes, the baked potato is not exactly the same thing as whole wheat spaghetti, it’s not like it took sooo much extra effort for me to chuck the thing in the oven at 400°F as soon as I walked in the door from work at 6:00. If I was editing this recipe for a magazine, I told myself rather convincingly, I would’ve just have to replace one word: “Pasta with Caramelized Onions, Spinach, and Parmesan” would be “Potatoes with Caramelized Onions, Spinach, and Parmesan.” And Sour Cream. 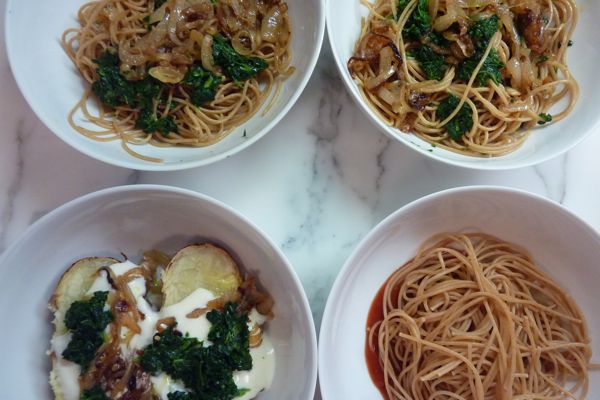 Whole Wheat Spaghetti with Caramelized Onion, Spinach, and Parmesan (The No-Mind-Game Version) I think of this as the stepsister of Pasta with Yogurt and Caramelized Onions. My friend (and former Real Simple co-worker) Frances used to make a version of it for her own family and I fell in love because it doesn’t require hunting down sheep’s milk yogurt, is remarkably pantry friendly, so perfect for those nights you walk in the door from work with exactly no idea what to make. It takes 20-25 minutes, unless you have a daughter who requires the pasta be swapped with a baked potato.

Pour a few glugs of olive oil into a skillet set over medium-low heat, and cook 3 large onions (sliced) for a minimum of 15 minutes and up to 45 minutes. While onions cook, prepare 1 pound whole wheat spaghetti according to package directions. During the last minute of pasta cooking, add a handful of frozen spinach (or a big handful of fresh spinach) to the water. Drain pasta and spinach together. (If spinach integrated into pasta is going to cause a revolt with certain diners at your table, then just cook the spinach in the pasta pot after you’ve drained the pasta.) Toss pasta with olive oil and distribute into bowls. Stir about a tablespoon of balsamic vinegar into the onions, then heap the onions on top of the pasta. Top with freshly grated Parmesan.

The life-altering tidbit I learned from this post is to put the frozen spinach IN THE PASTA POT WITH THE PASTA AND DRAIN TOGETHER. Why could I not have thought of this on my own? Thank you!

What whole wheat pasta do you use? I am having a hard time convincing my family that it’s an acceptable alternative. My son won’t eat pasta either … I still can’t figure out how he is my child.

What a great post!! I end up ‘customizing’ a lot in our kitchen!! 3 plates out of 4? i would call that a huge success.
thanks for making me smile today and for filling my head with good ideas. 🙂

Yes! The spinach with the past in the water trick is fantastic. I can’t believe I’ve never thought of that. This is definitely one I will try – even if the picky eater in residence will reject it.

Karen – For this dinner, I used organic whole wheat spaghetti from Trader Joe’s, but you can pretty much use any regular supermarket version. If it’s smothered in “pink” sauce, Abby doesn’t really notice.

What a clever dinner strategy, I love it!

Oh, I know this game! But in our house we play Deconstruction instead. If the adults are having enchiladas, the child has a pile of chopped chicken, a couple warmed tortillas, a pile of cheese, and a stick of celery. The celery replaces the sauce, of course!

Yes! Salad bar is a favourite version of this. My kids mostly end up with toppings in demarcated piles on their plates, but I get to eat salad for dinner and the prep is the same. Thank goodness for my dishwasher.

So good to know we’re not alone. Is this enabling? Perhaps. Whatever works.

I have to tell you how I ADORE your website, anyone who was affiliated with Cookie mag, well you pretty much walk on water 🙂 I’ve made tons o’ your recipes and they’re ALL great!

I write about children’s books! http://www.juliasbookbag.com/ I’d love it if you would check me out and I LOVE your book suggestions that come along from time to time! Aloha!

That original version looks amazing. Of course, anything plus caramelized onions would be an ace-in-the-hole.

Karen –
I got them to covert by using angel hair whole wheat.

Love this post because I too convince myself that I’m not making different things for my family. My husband & I eat the same meal and my daughter has it with no meat but lots of the veggies, my son, not so much on the veggies but meat and no sauce. Love it! Love reading your blog and getting great recipes. Now if I could get my husband to eat whole wheat pasta…I’m going to try the angel hair trick. Thanks!!

[…] This was cute and reminded me a little of my younger days… Dinner: a Love Story explains how to make one meal fit all. […]

Thank you for this post! I read it during the work day yesterday while wondering what to make for dinner (and thinking I had nothing to cook) and realized I had everything in the refrigerator to make this. It turned out great.

I just came across your blog. I love this post because you describe exactly what goes on at my house at dinnertime, but you make it sound sane and purposeful. Plus, you’ve reminded me of a pasta I used to make with caramelized onions. It was very similar to yours and included some chopped kalamata olives. I think I’ll make it tonight. Thank you… I’m looking forward to reading more on your blog!

Looks yummy! I think my whole family will eat the original recipe but the method will definitely come in handy. Much easier than trying to pick stuff out.

You’re starving me to death. This is what I’ve been searching for. Love the website. Keep up the fantastic work and articles. Great stuff!

Love it! Sometimes you just have to do what works and if you are all eating at least parts of the same thing, it’s definitely in the realm of “one meal” for family dinner. Our strategy if more “everything goes into one bowl” and ye that is picky must pick out the stuff you will eat. But your approach is definitely more camera-worthy. I think I need some of those bowls!

Thank you for sharing your tips, what great ideas! Our only issue at the family dinner table is with the eating habits of my stepson (my toddler will eat anything if it’s edible…and even sometimes if it’s not! Ha!). He won’t touch ANY food. In fact, he cries when you even put it on the table. The only thing he will eat is chips, chicken nuggets and sweets of course. This is because this is all his mom feeds him when he is with her (we have him every weekend). Her mentality is give him WHATEVER he wants as long as he eats. So he will just go without eating anything the entire time we have him if he doesn’t get the junk. Any suggestions? We have tried everything in every book and don’t really know what else to do.

By the way, I am your newest follower from FMBT. Love your blog! You can find me at:

Loved going down the rabbit hole with you on this post!! Sometimes it’s just about survival, right? Must brag for one moment that I always throw in frozen peas or some kind of quick cooking green veg into boiling pasta, too. Anything for one less pot to clean!

Can I ask where those perfect bowls came from?

Great recipe! I just whipped it up tonight for my boyfriend and me and we both loved its simplicity but also its scrumptious taste!

What would I do without you!!!!

I made this dish for dinner tonight. It was really good. Thanks for the recipe, and the inspiration. Love your website and hope to buy the book soon!

Thank you for this recipe, Jenny! My 6-year-old son devoured it! I substituted kale for spinach (just because its what I had on hand) and tossed in a handful of fresh peas too. Delish!

I also have thoroughly enjoyed your book – I poured over it during my recent vacation, arriving back home with newly inspired to make dinner for my family!

I began making this meal from your book about a year ago. It has become a staple. When I began making it, I followed the recipe. At the time, we had a teenager in the house (the last of the kiddos). She loved it. Now that she is away at college and it’s just hubby and I at home, we eat this at least 2x a month. Now I add sliced fresh mushrooms into the pan while the onions are cooking. We love it. And the leftovers make a great cold pasta salad dish the next day for lunch. Delish.

This is one of my favorite recipes. Just put it on puff pastry to take to a dinner party. DELISH!!!

I used to cook delicious pasta recipes like this for myself all the time! Unfortunately, my husband does not go for any pasta that does not come smothered in some type of “sauce”- so bolognese, no problem. Carbonara? OK, barely, mostly because of the bacon factor. Beautiful dishes like this with just olive oil and parm to unite the ingredients? Not so much. I’m perplexed. Not that I needed a reason to cut my pasta intake…

This is the post that convinced me. I have 2 kids and 3 step kids; Mr10 won’t eat veg (except broccoli and white potatoes) unless it’s mixed into things, Ms6 will eat anything, but it can’t have sauce on it or be touching the other foods. Ms14 wants variety, the others want the same tasty things. Ms2 wants fruit and veg, preferably raw, and Mr12 wants MEATMOREMEATOMGMEAT. Five different assortments of likes and dislikes. Husband feels soup isn’t a meal. I’m a vegetarian. Life is insane. Surely, surely, there is some crazy permutation of pasta like this that will not leave anyone in tears (including me), and will leave us fed?!