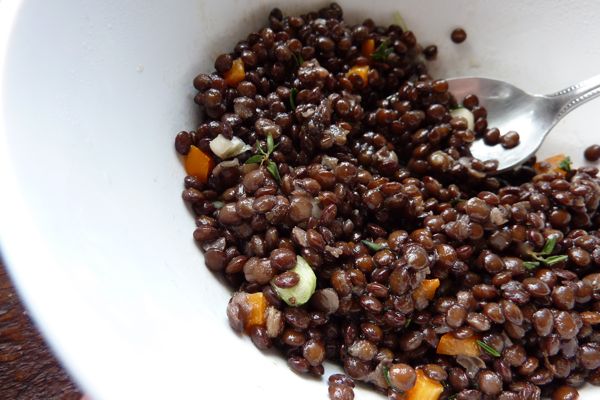 In the mid-80s, after a long day of wrestling with algebra and 7th-grade-girl politics, my best friend Jeni and I would head to her house to decompress with a Ms. Pacman marathon. I remember the two of us walking into the sunny foyer of their tall Victorian, dumping our CB jackets and LeSportSacs in a big mound on the floor (so thoughtful), and then, like programmed robots who had no say in the matter, heading straight for the kitchen.

Remember when Bugs Bunny would smell something delicious and he would literally float in the air following the wafting aroma? That was what it was like walking into that house. More often than not, Jeni’s mother Rosa would be in her kitchen cooking up a roast, baking a pie, or concocting dinner from one of the stained cards or yellowed New York Times clippings that were jammed into a little wooden recipe box on the counter.

I felt so comfortable in their home that I would open the refrigerator and poke around for something to eat without even asking. Unlike in my house, where the idea of a jackpot after school snack was an Entenmann’s chocolate frosted doughnut dipped in a glass of whole milk, a jackpot at Jeni’s was a tupperware container filled with leftovers from dinner the night before. And on the best days, one of those leftovers was Rosa’s lentil salad. There was nothing terribly fancy about the recipe — it was made with lentils, scallions, peppers, and a tarragon-spiked vinaigrette — but something magical would happen overnight when all those flavors mingled. I would’ve bypassed the entire Entenmann’s section in Grand Union for a bowl of the stuff.

I probably ate the lentil salad eight hundred times in my childhood, but I don’t think one of those times was in a proper dinner table setting. The only way I can remember eating it is straight from the tupperware container, both Jeni and I sitting on the Marimekko-cushioned kitchen bench fighting each other for every last bite. And even though I’ve since made some version of the recipe in my own kitchen eight hundred times (most recently last week alongside a simple salmon), that still remains my favorite way to eat it. 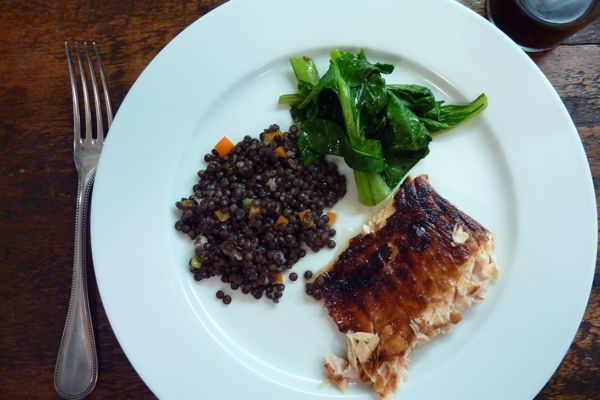 Last week, I had the salad with fresh market spinach (sauteed in garlic and olive oil) and a salmon I’m testing for the book. That one is not ready for prime time yet, so in the meantime you can just use this basic salmon recipe.

For so long I approached cooking lentils like cooking risotto — that is, I felt I needed to be very scientific about the amount of liquid to lentils I was using. Once I started approaching cooking lentils like cooking pasta it was somewhat liberating. Also: Rosa’s lentil salad was always made from regular brown lentils, but I try to sub in belugas — which hold their shape better and look so pretty — whenever I have them on hand.

1 cup beluga lentils (or regular brown lentils)
2 1/2 – 3 cups liquid (chicken stock, water) or enough to cover lentils by about an inch
1 bunch scallions (white and light green parts), chopped
3 tablespoons chopped bell pepper (any color — I used orange here since it was what I had, but Rosa’s was always a mix of green and red)
leaves from two sprigs of fresh thyme (or finely chopped parsley)
1 1/2 teaspoons Dijon mustard
little less than 1/4 cup vinegar (I used white balsamic, but you can use tarragon, red wine, regular balsamic)
1/3 cup olive oil
salt and pepper

In a medium pot, boil lentils in broth-water combo, then reduce heat and simmer for 15-20 minutes (15 if you are using belugas, more like 20 for regular lentils). While lentils are cooking, make your dressing by whisking together mustard, vinegar, olive oil, salt and pepper.

When lentils are tender, but still holding their shape, drain. Toss lentils with scallions, pepper, thyme, and vinaigrette. (You may not need all the vinaigrette — so drizzle it in instead of dumping it until it looks right.)

PS: Rosa’s name should be familiar to DALS readers — she was the one behind that moist and chocolatey mud cake, and the one who gave me Cricket in the Thicket when Abby was born eight years ago.

Looks delicious!! Thanks for sharing : )

I bet that would be tasty with a poached egg on top. Now I’m hungry.

I had a red CB ski jacket when I was in 7th grade! It was my prize posession!

Your Entenman’s reference brought me back to my own childhood! I can almost feel and hear the crunch of that thick chocolate covering. From earlier posts: when I see that picture of your car with the “Make Dinner Not War” bumper sticker and you can see the KI on your car, it makes me smile. I have a similar PI sticker, which is for Pawley’s Island, also in SC. I also make the road-trip with 2 kids, (but mine are boys) and have enjoyed your tips on a long car ride. But I especially enjoy the posts about the SC food. Thanks!!

I’ve never been a huge lentil person, not out of dislike but just that they were never around my house growing up. Perhaps this recipe will change that?! Thanks.

I always think of lentils as a soup. I can’t wait to try this and I LOVE the suggestion of a poached egg on top… although there are few things that an egg cannot turn into a party in my book. Thanks!

I have a package of pre cooked Trader Joes lentils sitting in my fridge right now. I now know what to do with them…thank you!

I loved reading this story. It is always so interesting to see what things stick in someone’s memory. I can’t help but wonder if you are still in touch with Jeni or Rosa?

Great recipe – here’s my go-to lentil salad, and Courtney (above), I always use the Trader Joe’s lentils in this recipe to make it even faster! 🙂
From My New Roots blog:
The Best Lentil Salad, Ever
Ingredients:
2 ¼ cups (1 lb.) Du Puy lentils
1 medium red onion, diced
1 cup dried currants (you could also use raisins or other dried fruit)
1/3 cup capers

Directions:
1. Rinse lentils well, drain. Place in a pot and cover with a 3-4 inches of water, bring to a boil, reduce to simmer. Check lentils for doneness after 15 minutes, but they should take about 20 minutes in total. You will know they are cooked if they still retain a slight tooth – al dente! Overcooking the lentils is the death of this dish. Be careful!
2. While the lentils are simmering, make the dressing by placing all ingredients in a jar with a tight fitting lid and shake vigorously to combine.
3. Finely dice red onion – the salad is best if all the ingredients are about the same size. If using raisins, chop them roughly to make them a bit smaller, and do the same with the capers if they are large.
4. When the lentils are cooked, remove from heat, drain and place under cold running water to stop the cooking process. Once cooled slightly but still a little warm, place lentils in a large serving bowl and toss with dressing. Add other onion, capers, and currants. If using other add-ins such as herbs, greens, or cheese, wait until just before serving. Otherwise, this salad can hang out in the fridge for a couple days.

Rosa’s salad just made my night! Thank you!

I’ve had this bookmarked forever and just made it for a potluck I’m going to. I was a little nervous since I’ve never cooked lentils before, but it was incredibly easy and delicious. Thanks!

I love lentils and this salad looks terrific. I can relate to the difference between households. I had a friend whose mother was at home (I was a latchkey kid way before they coined the phrase) so it was great to go to her house afterschool – her mother made us ‘milky tea’ and always had something good for a snack for us before we tackled homework.

I notice that you don’t say how many servings this makes – it would be helpful to have a gauge before I make it.