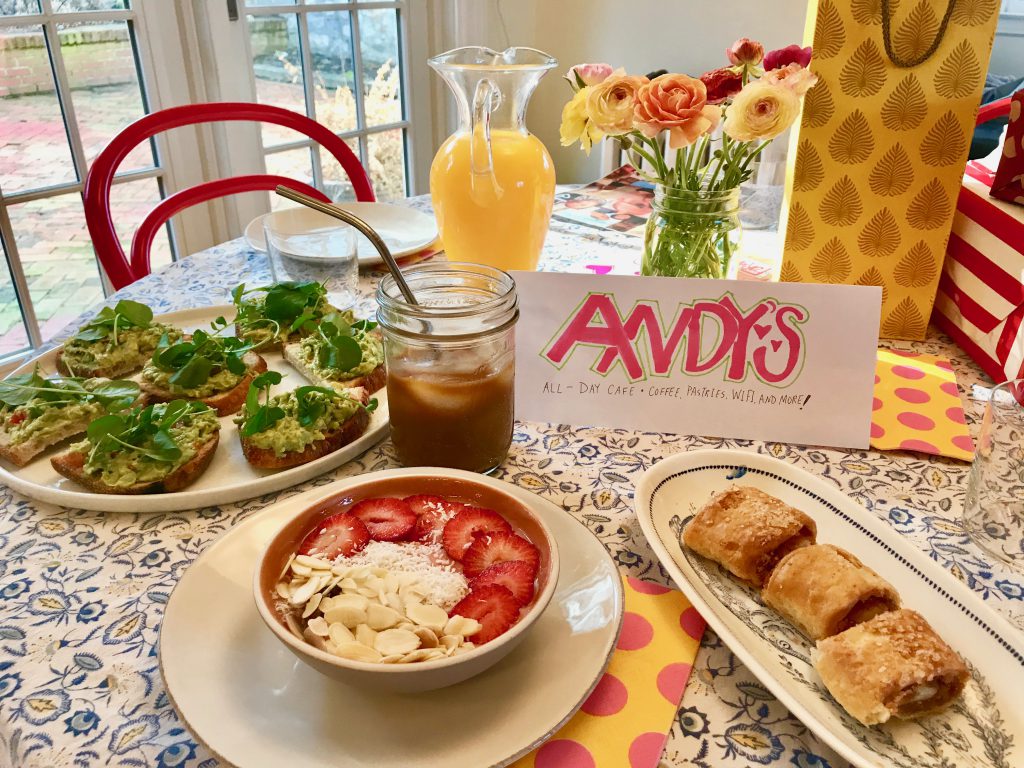 As most of you know, we are big fans of the celebratory birthday breakfast in our house and, thankfully, that doesn’t seem to be changing as the kids get older. In fact, they seem more into the tradition than ever, most recently evidenced by this spread for Andy a few weeks back. Influenced heavily by the All-Day-Cafe aesthetic of some of their favorite restaurants in New York, the girls seem to be moving away from mile-high stacks of pancakes and waffles with bacon, and more in the direction of smoothie bowls, avocado toasts, and cold brew — a trend their parents, who would rather not spend Sunday afternoon in a food-comatose state, appreciate tremendously. The only burning question, on this particular morning, was: What kind of smoothie bowl and which recipe for avocado toast? (As for cold brew: There is really only one for us.) 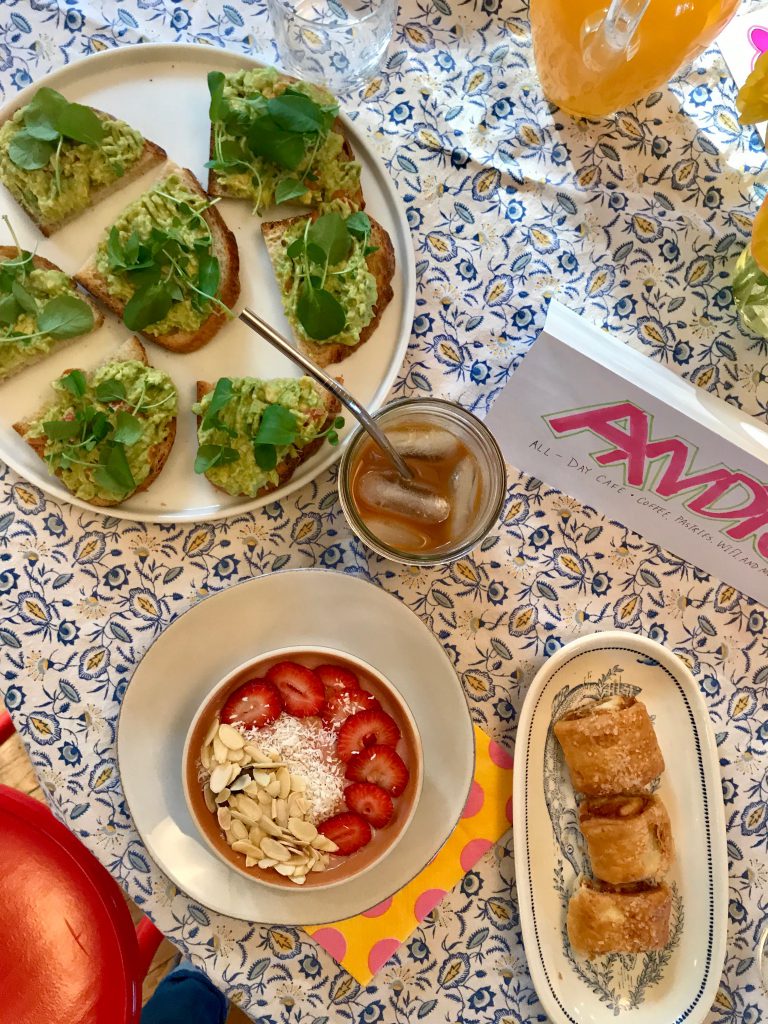 .
I don’t think I’m exaggerating when I say that 75% of the meals Abby has eaten in the last six months have been either an avocado toast or a smoothie bowl. The best thing about this new obsession, besides how much healthier it is than, say, her brief Takis obsession, is that she has been very into making them herself, playing around with different combinations for both… 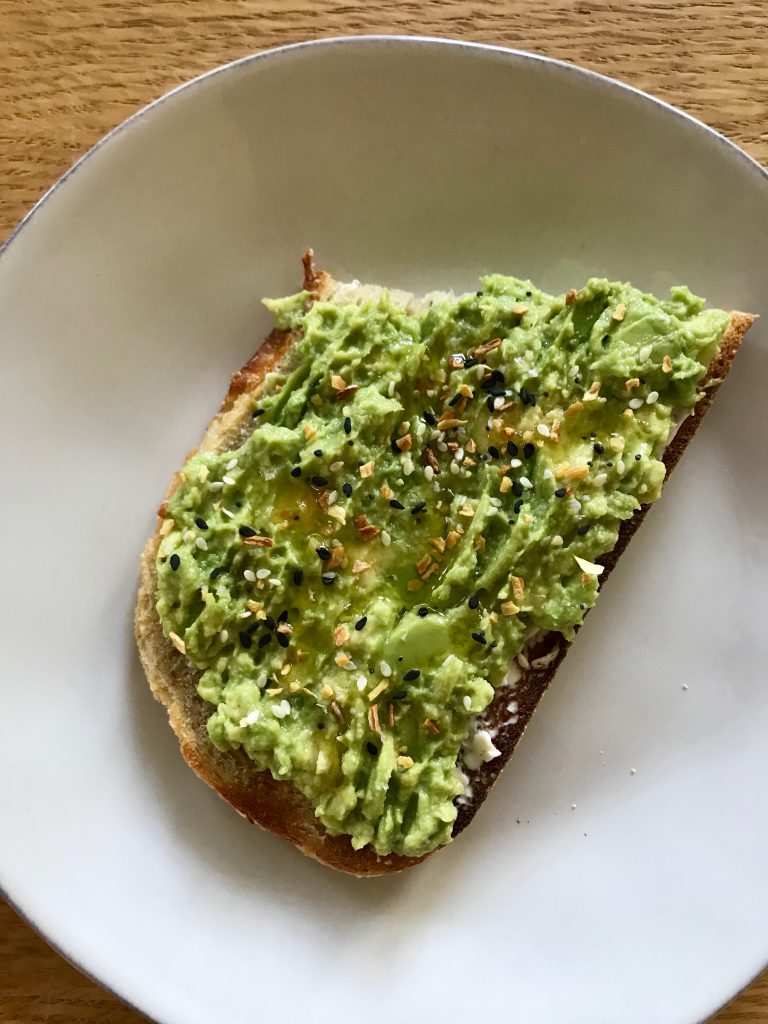 She has experimented with avocado toasts topped with Everything Bagel seasoning (above); drizzled with olive oil; spread with cream cheese or coconut oil underneath; topped with spicy sprouts or red pepper flakes; spread on toasted thick Pullman slices and thin sourdough ones… 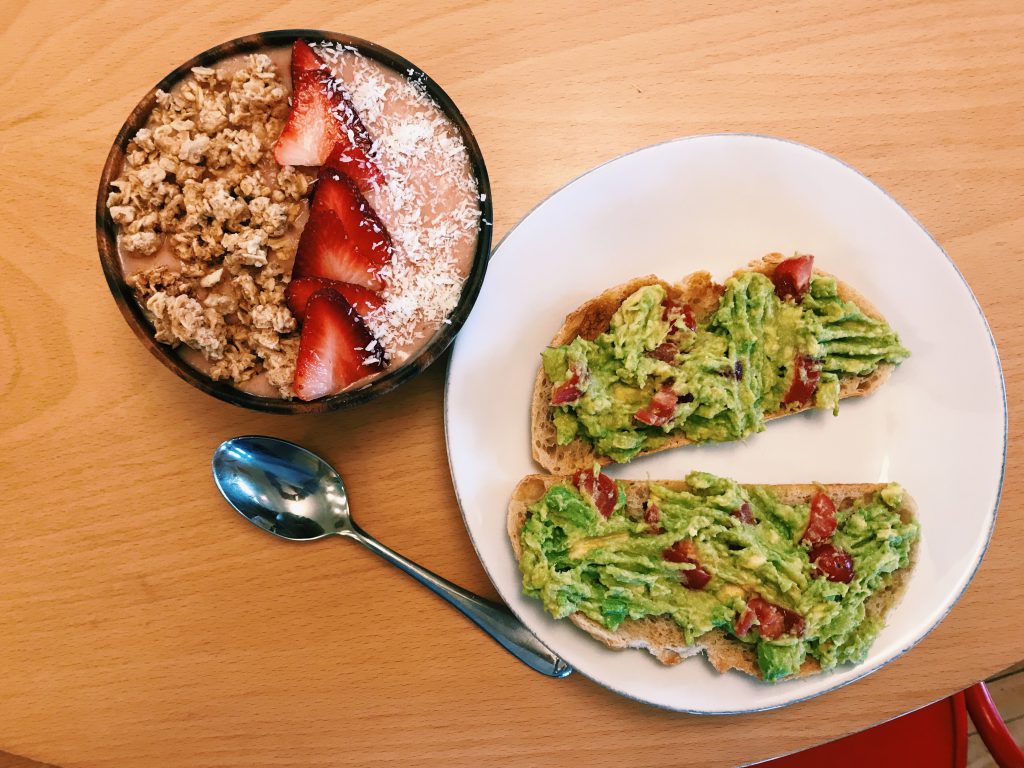 .
…she’s mixed in a few drops of Sriracha, a spoonful of salsa, or chopped grape tomatoes. There has been extensive field research in diners, cafes, Starbucks (!), and airport lounges in cities up and down the Eastern seaboard… 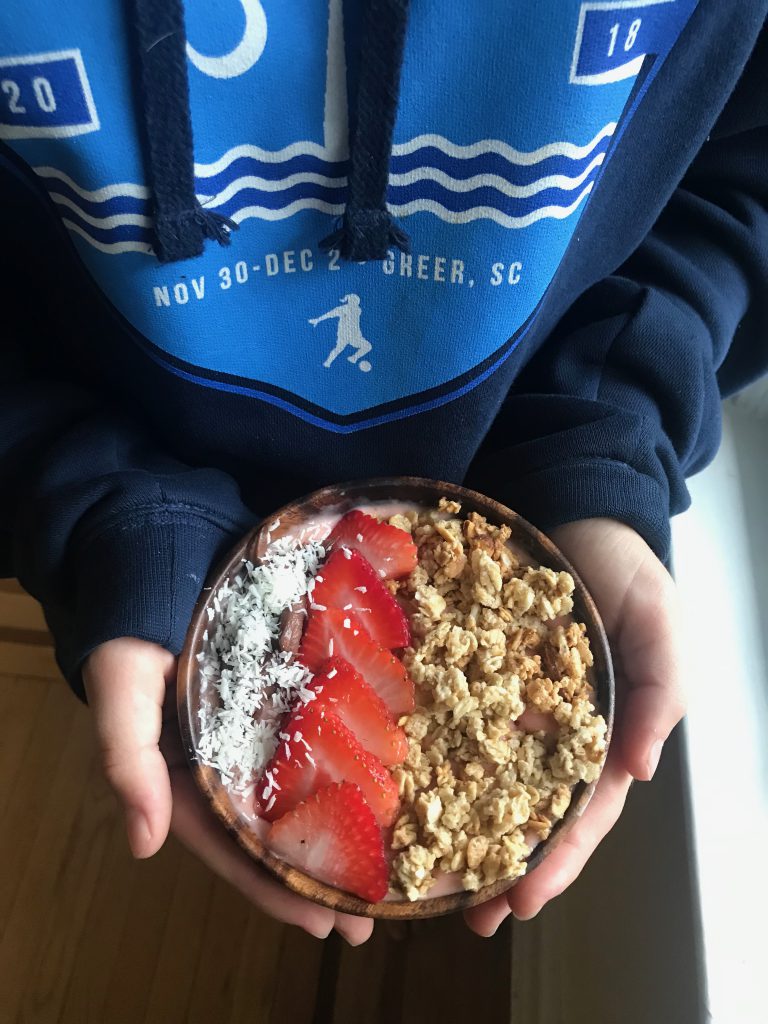 .
…as for smoothie bowls, she’s watched what seems like hours worth of Earth Andy videos in search of the secret to creating a smoothie consistency that creates “quadrants” when blended. (No, this is not a technical term, but maybe it will be now?) She took careful notes on the ratio of frozen fruit to fresh, experimented with topping design and the most proper (read: photogenic) serving bowls. Abby has always been this way. When she gets into something — whether it’s smoothie bowls or Roald Dahl or Kanye or Emma Chamberlain or Milk Makeup — she drills deep. So trust me when I say that when she decided on the smoothie bowl and avocado toast worthy of this birthday breakfast, they were extremely well-considered. 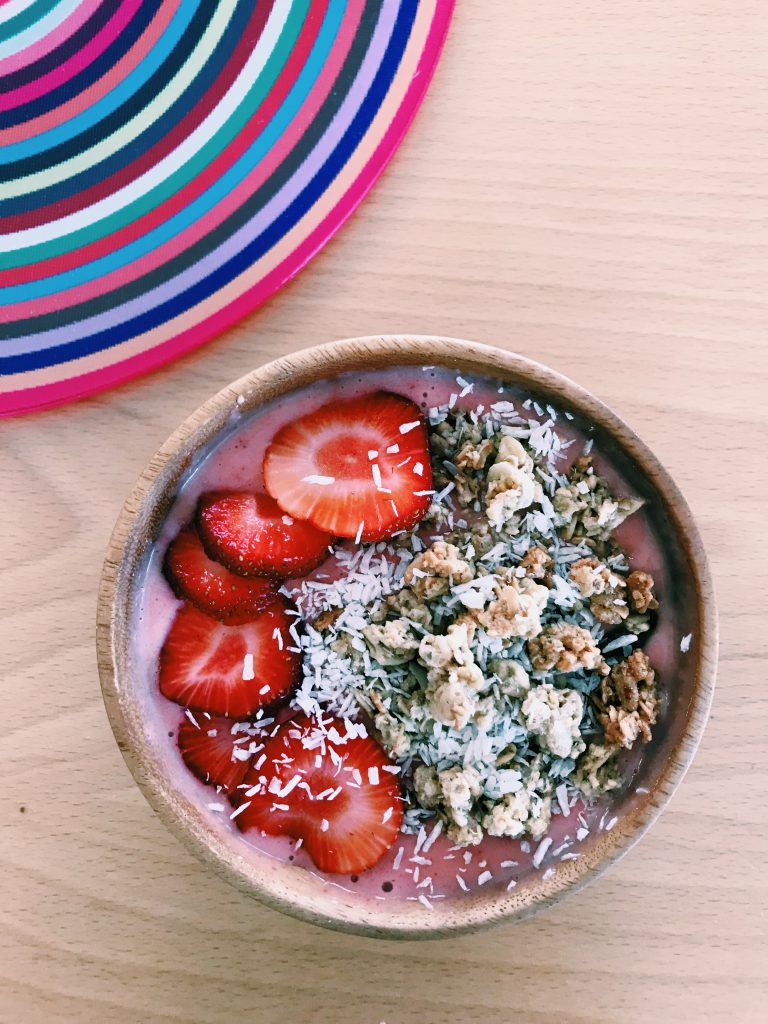 .
Note: These recipes below, are written by Abby.

Fill bottom of cereal sized bowl with one handful of granola. Pour the smoothie into the bowl and, using a spoon, smooth the top. Drop a scoop of nutella (if using) on one side of the bowl.

Top however you want, I like organizing in stripes: one handful of granola to cover the nutella, then a row of strawberries, and a row of coconut.

In a medium bowl smash avocado, until chunky — do not overmix. Mix in sriracha, cherry tomatoes and salt.  Toast two slices of bread. Use fork to spread avocado mash on toast. Top with microgreens or sprouts.

I love this and can’t wait to show my 10 year old! We do avocado toast, but haven’t ventured into smoothie bowls. I have a feeling that’s about to change.

I love these recipes

I gave the Evening Bagel recipe to my daughter and she has it everyday.

I lol’ed when I clicked on the link for Takis. Reminds me of my kids’ current obsession- Munchies. https://www.fritolay.com/snacks/product-page/munchies/munchies-flamin-hot-flavored-snack-mix

I purchased the recommended cold brew last year and found it heart-racingly WAY TOO STRONG. Do you dilute it differently than the packet directions?

Oh wow, that smoothie bowl looks delicious! I’ve never actually tried avocado on toast, but everyone seems to love it so I feel I should one day!

i have never been a fan of smoothies, because i hate to drink a meal. but smoothie BOWLS? yes, please! (discovered the addition of acai powder and goji berries while vacationing in San Diego and there is no going back!)

I am here for this

I think frozen breakfasts sound great if you live in a warm climate, but as a Canadian who deals with snow 8 months out of the year – the last thing I want to eat is a frozen breakfast, only to go outside into my frozen car. I want heat inside me!

Abby is obviously going to end up in California for college, where Avocado toasts and acai bowls were invented. 🙂

Remind me to have my next birthday at your house! ❤️

Can she make my birthday breakfast? As this looks like a perfect way to celebrate.

Hello! I’m sorry to post this here, but I’m looking for an old post where you talked about a program where people provide food to others in their local area that may not be able to afford it/are food insecure. I cannot remember the name of the program or come up with any search terms that are finding it in your archive. Could you please remind me of the name of the program? Thank you!

Ok, I think I just answered my own question! I happened to scroll down on your home page and saw a link for Family-to-Family!

My favorite simple avocado toast is from a cafe by my office: grilled sourdough, ricotta, thinly sliced avocado, and lemon zest!

That sounds delightful! I will have to try that at home. 🙂

Smoothie bowls were a huge hit with the kids! Great idea!

Is there a good substitute for mango in the smoothie bowl? Also, so surreal seeing Greer, SC on Abby’s sweatshirt! That’s 20 min from me. 🙂

This is fantastic. I have been running into a dry spell of different things to make of late. Thanks for something new and exciting to try.