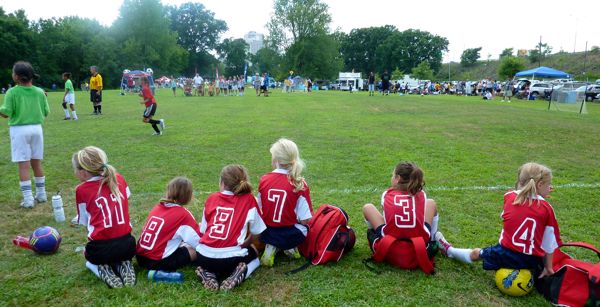 You may have gathered by now that the only thing we like more than grilling up a big ol’ leg of lamb or writing about grilling that big ol’ leg of lamb is watching our daughters play soccer. I remember when they were young, other parents who had a few years on us, warned once soccer kicks in, you can kiss your weekends goodbye. The sad truth is that even though our friends are probably sick of us giving our one-word excuse for why we can’t go to the barbecue or the birthday party (“soccer”), and even though we had to cancel our Memorial Day vacation plans this year for a tournament (first place, plus a winning goal scored on a breakaway, ahem), I’m not sure what else I’d rather be doing on a Saturday than sitting in my fold-out chair, chatting with parents, and cheering for a fleet of pony-tailed girls who have come to be some of my daughters’ closest friends. (I ask you: Is there anything in the world better than a pony-tailed girl in an oversized soccer uniform?)

But sometimes I wonder if I’m a little nuts. Like when I wake up on the first Saturday of the summer without soccer in the schedule and feel bereft. Or when I go to bed at night thinking about how we can get our 50-pound center midfielder to shoot with more power. Or when I watch the US women’s Olympic team (soccer or otherwise) and think, if I ran a few more miles each week, maybe, just maybe, I could make the 2016 Games? It’s desperate times like these when I’m grateful to have Coach Andy to talk to.  Coach Andy – not to be confused with my Andy, aka First Place Loser Andy – is Andrea Montalbano, my 8-year-old’s soccer coach, and mother of two soccer stars herself.  She started playing when she was eight, went on to four years of Division 1 ball at Harvard, then, as a producer on the Today show, covered, among other things, the 1999 US Women’s National Championship. But best of all, she’s written a bunch of soccer books for girls that Phoebe loves maybe even more than her Man U T-shirt. You’ve already heard about Breakaway, and now, in time for the Olympics, comes Lily Out of Bounds, the first in her series called Soccer Sisters. (2013 Update: Volume 2, Vee Caught Offside, has been released!) In other words, Coach Andy knows a little something about soccer and soccer parents. I thought she might be able to answer a few of my burning questions.

First off, tell me about your book. What does it mean to be a Soccer Sister and how can my daughter become one because it sounds really cool?

AM: A soccer sister is a friend who plays with you, win or lose, who always has your back, who laughs at your worst jokes, who will pick you up and dust you off. The friend who will love you just the same – even if you really blow it.  It actually doesn’t have to be soccer, but really any friend who “gets” you. In the book, 13-year-old soccer star Lily and her teammates live and play by a “Code” for Soccer Sisters and the book is about her struggling to stay true to this code.

Speaking of Codes of Conduct, how does a parent talk to their kid’s coach about getting more playing time or trying out a new position without coming off as a total creep?

AM: Well first off, I absolutely think that parents should talk to coaches but if parents are telling the coach what the players want too often, then it’s a sign that the players don’t have right relationship with their coach. But when kids are too young to speak up for themselves, I think the worst possible time to talk about that kind of thing is right before or right after the game when everyone’s emotions are unusually high. Practice is the place to do it. If you come up to me before practice and ask, “Can Abby try playing center half?” usually I’ll say “sure!” then figure out a way to take it into game plan. But if you do it before a game it’s harder. You don’t want to insert a little unhappiness into the pre- or post-game.

You started playing when you were eight. What pushed you to play competitively and keep playing competitively? Did you have Tiger parents?

AM: They were the opposite of tiger parents. They were supportive but never really had much to do with soccer. My father lived on another continent and my mother worked full time. Until I could drive, I was always reliant on other parents or teammates to drive me to practice and games. I started playing when I was 8 and things got really busy when I was 15 or 16. I was taking AP classes, sometimes playing on three teams at one time, driving an hour each way to practiceSoccer was huge part of my life and it was intense, but I never felt like it was a labor. I wanted to be there. I was excited to play. It gave me confidence to try other things in every part of my life. 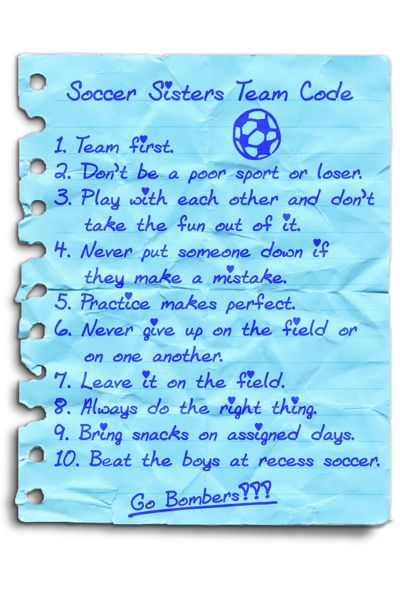 AM: Yes. I’ll tell you a story. When I was a kid, I was good at gymnastics and used to do back flips across my front yard. My father would watch me and always say the same thing: “Andrea, you are going to be the first president of the United States to do back flips on the White House Lawn.” Every time, he would say that to me.  It was silly, but I believed him. I could see myself doing back flips at the White House. I started to believe that because I could do great things with my body, like back flips, that I could do great things with my life.

Sometimes, after a tough loss, my daughter cries. But part of me likes that because it’s good to see that she really cares. Does that make me the love child of Stefano Capriati and Amy Chua? Where do I get help or, more important, how do I talk to my kid when she’s upset?

AM:  You say, well losing doesn’t feel very good, but it’s an important part of the game. To sit there and say “Don’t cry, it’s just a game,” well that’s disregarding their emotions. If a kid is playing with heart, it’s not just a game to them. They can’t help it. It’s OK for them to cry is because losing is a part of the game and let’s face it, it feels awful and to pretend to feel otherwise is unfair. If you deny they’re having these feelings, you’re losing the opportunity for a teaching moment. I always tell my kids they can’t play any game – soccer, Monopoly, ping pong, anything! — if they aren’t prepared to lose, because playing is not just about winning, it’s about being in the game.

How bad is it if I, theoretically, whispered to my daughter “down the line“ when she’s about to throw the ball directly into the open field to a girl on the other team, even though we’ve told her “remember to throw balls in down the line” at breakfast lunch and dinner yet never ever remembers to do it at game time? Theoretically.

AM: I completely understand that instinct. One of the reasons I realized I had to be a coach is because I could never keep my mouth shut on the sidelines. Sometimes you can’t help it, you want to help them. And if you see your child get fouled you’re going to lose it. But the worst possible thing you could do as a parent is to yell something negative at your kid while a game is on. Kids are so sensitive to what their parents say and take that stuff hard. But cheering is good, it’s part of the game. As long as it’s in the right spirit.

There was another reason you decided you needed to coach, though?

AM: Right. During my daughter Lily’s last game of the season about a year ago (she was 7) there was a physical play toward the end of the game. Lily is strong, the two girls went for the ball at the same time, but there was no foul, no one fell down and the ball went out of bounds.  All of sudden, three adults from the other team pointed and yelled at Lily “No pushing!” and my daughter burst into tears. The referee ended the game early and it was chaos. I was not happy, as you can imagine.  So I took Lily by the hand over to the other group of parents and coaches and I said, “I want you to see what happens when adults yell at a little girl.” It was not a pretty scene at all, but I realized then that most of these parents – and the yellers were all men – had never played soccer, and had no idea how to cope with little girls playing hard. After I politely suggested they start coaching a non-contact sport like Volleyball, I also decided that I would be Lily’s head coach.

Thank goodness for that! One last question: What’s for dinner tonight?

AM: Well I have to order Chinese because I’m out tonight, but this week I’ll make bassa fish fingers with “mommy’s magic dipping sauce” (ketchup, mayo, lemon, black pepper) and fennel salad with lemon vinaigrette.  My kids think it’s crunchy. 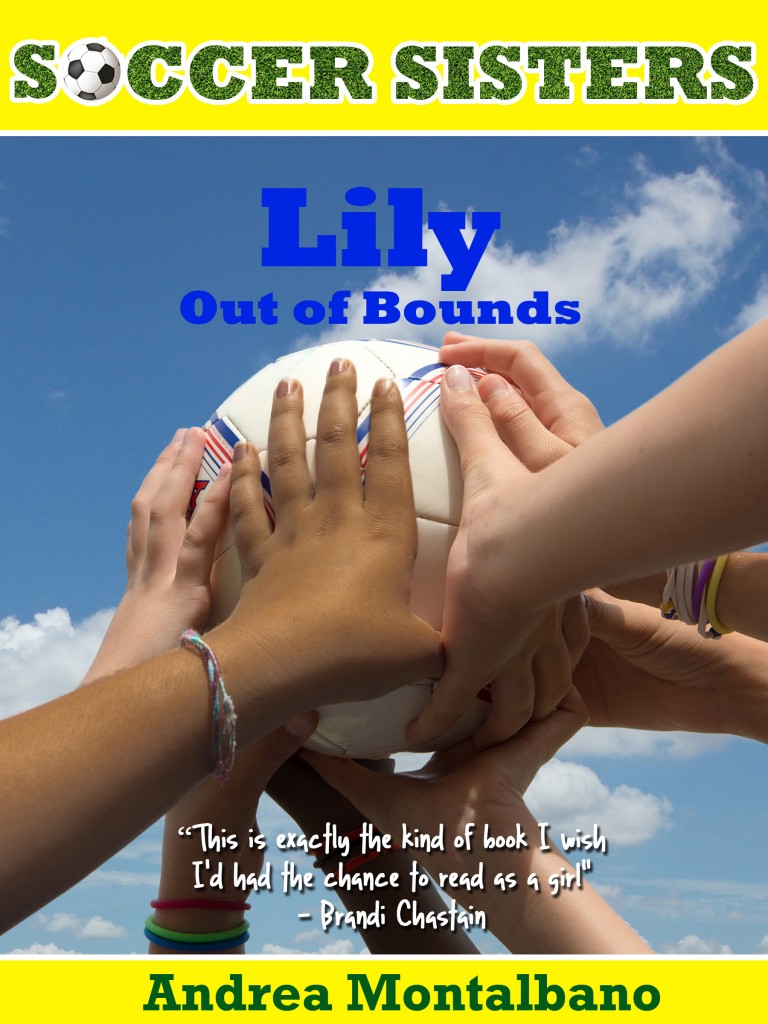 SO COOL. All of it! Waaaaaay cool. I loved what she had to say about how to discuss the issue of losing. My daughter has a really hard time with this during board games.

I like Andrea’s approach to emotional reactions to losing. I still miss soccer and my kids finished playing six years ago 🙂 We had wonderful coaches, but I was appalled at the behavior of some parents (other team)on the sidelines.Yelling (cursing!) and derogatory remarks happened but were not tolerated by our coach. He even caught one parent who was holding the line marker cheating! We are talking about elementary school kids – what a bad example the parents can set.

We had such a terrible experience with one of my son’s coaches (for baseball) that it turned us off the sport. luckily he’s into other things with coaches more like Andrea. Great post!

I have two daughters and one is OBSESSED with soccer, so I am definitely going to check this out. I love your books coverage. Please keep it up! And thanks for keeping my Soccer Mom craziness in check!!!