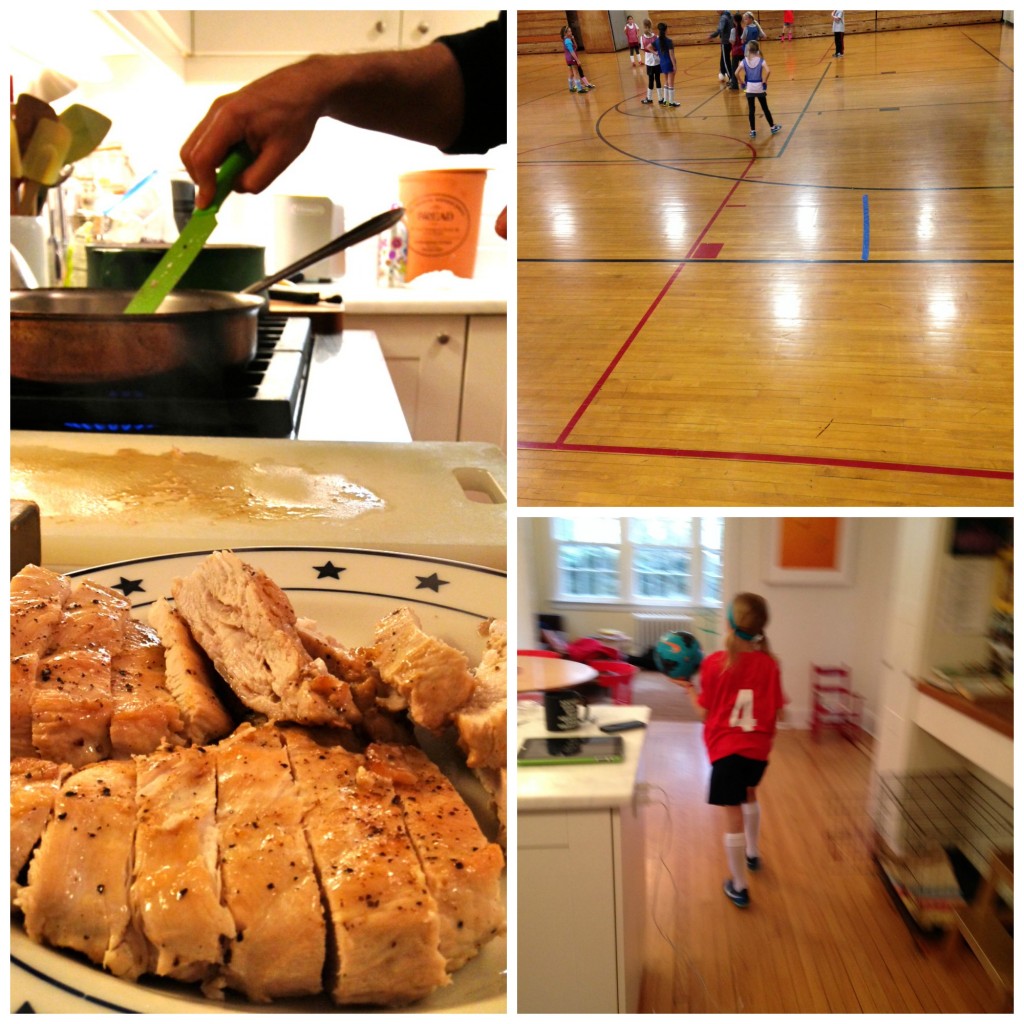 Last Thursday night I called Andy from the parking lot of a school. It was 7:45 PM.  I was waiting for my 10-year-old to get out of soccer practice, held in the school’s gym. It was frigid. I was starving.

I heard Keith Richards’ guitar in the background and some ice clinking in what I rightly guessed was a Manhattan.

He was alone in the house cooking. Our 11-year-old wasn’t coming home until 8:15.

What I don’t love: That practice times are creeping later and later. That, in fact, the other night we reached a milestone in our house: The dinner table had been cleared, the tomato-sauce-smeared plates loaded into the dishwasher, the dog walked, the lights (mostly) turned off while we headed upstairs to read in bed — and Phoebe was still not home from soccer practice. She was dropped off at 9:40 by the sainted parent of a teammate. Her dinner, a bowl of pea soup with crusty bread, had been consumed at 6:30, before practice, which started at 7:30 across the county.

I am not complaining. Nor will I tolerate a single person who tells me that we are idiots for getting ourselves into this predicament. I firmly believe that what my kids are learning being part of a team is every bit as valuable as what they are learning at our dinner table. And I firmly reserve the right to change my mind when it starts happening more than once a week. (Hello lacrosse season!)

So like every dinner obstacle before this one, we are adjusting. But if I was competing against extracurriculars for victory over weeknight dinnertime, the score right now would be Dinner: 4, Activities: 1. In my book — in any book — that’s a Win.

Plus, Andy got an hour to cook dinner while savoring a drink, without feeling like the game clock was ticking the whole time. And we all got to come home to Old School Chicken.

Brown chicken in olive oil in a large skillet set over medium-high heat. Remove chicken, add a little more olive oil to the pan and turn down heat to medium-low. And add onions and cook until slightly softened.  Add wine, broth, and lemon juice to the pan, and then chicken. Bring to a boil, then lower to a simmer and cover until chicken is cooked through and liquid is slightly thicker. Swirl in butter, add capers and serve.

Andy served with barley salad that had been tossed with arugula, grape tomatoes, feta, and vinaigrette.

Man, we’ve been taking a page out of your book lately with the after work cocktails at home. Now if I could only teach my husband to cook. This recipe looks easy enough for him, maybe I’ll start with that…

I love what you won’t tolerate and what you firmly believe in. We’re entering that season as well with two sports and it teaches so many things (to me as well).

We are starting this tonight. My son is starting Basketball with the Special Olympics! I am still trying to decide to eat before practice, starts at 6 or after 7:30? hmmmmm

When we have those dinnertime practices, I try to prepare as much of dinner as possible beforehand, give the kids a substantial snack, go to rehearsal/scouts/whatever and then do last-minute cooking or reheating and eat when we get home. Much nicer than having to hustle everybody through dinner so we can leave on time.

I have a couple of different tactics, depending on the schedule. Like Another Jenny, prep early and reheat is a big one. On the nights I get home with the younger kids from piano lessons at 6:30, when everyone is ravenous RIGHT NOW, I can often rely on my 11-yr-old to do a few things while we are gone (put something in the oven, cook the rice) so that we can sit down at the table within 10 minutes. Some nights it is planned leftovers (the other half of Sunday’s baked ziti is good on Tuesday in between 2 karate classes-one early, one late–one clarinet lesson, and a meeting). Sometimes it’s the slow cooker. And the best thing is Dinner Swap with a friend–once a week we each double a meal and trade it the next day. Fresh home-cooked meal, delivered.

This battle is over, and I lost. My daughter is 8, and sometimes her games start at 8:15! You tell yourself that the car rides and late night bowls of soup are special times for each kid to get individual attention. It might even be true …

You may as well have taken a play right out of our playbook…get it…
Anyway, we are struggling with the same thing, later and later practices. Our daughter has a 7:10-8:40 basketball practice on Friday nights. 8:40 p.m.!! And the mornings are getting earlier and more crowded, 7:00 a.m. band on Tuesday, 7:00 a.m. chorus on Thursday. Not to mention the 20 other things. We say yes because she wants to do it…because…she wants to AND .her friends are doing it. We are extremely grateful to the coaches and teachers who spend their time bettering our child but how much is too much.? I’ts all good stuff but maybe it’s becoming too much of a good thing. This is what we struggle with. Should we insist she cut down? She handles it pretty well but every now and then… not so much…sigh

Your writing rocks! I feel like I’m watching the story of your life in your posts. I make a version of this chicken, too. So classic and delicious.

First I must say – ANDY! So jealous! An hour alone in your home to cook while enjoying a drink….that is kind of my dream. It happens once every 4 months or so and I savor every minute!

Ok – moving on! Every stage has it’s difficulties, right? In the beginning it’s so hard to cook because, well, you have a newborn attached to you or a toddler climbing your leg. Now, you have homework – and sports – and play dates, etc. The challenge for me is that I have one in both stages – a toddler and a 7 year old! Dinner is sacred in my house though and most nights – we DO make it work 🙂

And hey, the chicken sounds lovely!

@Kirsten D: I used to give my kids a snack at 5 before activities (pastry, banana and glass of milk, for example), and then we would eat family dinner together at 8-8.30. In France, the after school snack – ‘le goûter – tides children over until supper.

During the business of activities, I keep remembering the quote “Just breathe – you are exactly where you are supposed to be right now.” My kids are both competitive swimmers and have 2 6:00 am practices a week and 3 4-6 pm practices. It seems like none of our days are predictable, so I am letting the rigid structure of dinner go. I just try to prep, freeze and organize as much as I can. And make scrambled eggs. For now. They are 9 and 11 and will be grown before I know it. Just breathe!

I’m a little disturbed that parents allow/put up with having sports practices on school nights that last so late for grammar school age kids. It’s a disturbing trend and I hope I have enough backbone to refuse when my children get to be that age.

Oh, can I ever relate! My 13 year old plays rep hockey (highly competitive in Canada) which happens five nights a week (combination of practice and games). It’s actually become easier as he gets older because the outings take place later and later each year. Sure, we’re a little sleep deprived thanks to the nights we don’t roll in until nearly 10:30pm (don’t even get me started on what he needs to eat when we arrive home – when did steak become a snack?), but I can promise you that he would be awake even if we were home, and it’s my belief that it’s better to keep him busy and active than the alternative, which at his age often equates to computers and TV. The nice thing about these later nights is that family dinner is a real thing again, and homework is complete before they leave for sports. Hang in there… it’ll get better really soon! Also… when we had games and practices that fell over dinner hour, and we were travelling to the other side of the city (45 minute drive) we often needed to eat “on the road” – drinking pureed soups in travel mugs was a definite favourite for everyone in the family.

Jenny, your girls are LOVIN sports and that is awesome. Sports taught me many a valuable thing, just like I leaned many a valuable thing eating and talking with my family. I loved this post because, as an Olympian, I truly believe in the power of sport and mostly about having fun by running around. As a kid, nothing gave me more joy than gettin my sweat on. Glad there are moms out there like you and my mom who put their kids first even when it is a drag. I never noticed my mom being annoyed, just like your kids probably don’t, but looking back, we really appreciate it!

Wow. This empty nester is surprised school systems allow such late night sports that often. A Friday night game I can see, but regular practice and games that late, I feel, is wrong. Students need sleep, and meals taken hours before sleep. And, its a huge disruption to the family spirit.
I appreciate the great learning experience being on a team creates. The abuse of hours spent needs change.

We are in a similar predicament in the spring and fall with Irish Dancing, hurling, and soccer. Tuesday and Thursday evenings came to be known as Portable Tuesdays/Thursdays. Creative menu planning that included the kids was enjoyable, and our car conversations may have been even more in depth than our regular dinner conversations. I don’t miss those nights at the moment, but I’m prepared for their return!

I hear you! I have three kids in sports, and no two nights are the same in terms of who’s going where at what time. I do meals in stages, and I always make it a goal that no one eats alone. Sometimes, for instance, my daughter sits down at 8 to eat with my husband, who’s just in from work. The boys, who are in bed, ate with me at 6. It works, and it makes for some nice, intimate conversations. What we get from athletics is worth it.