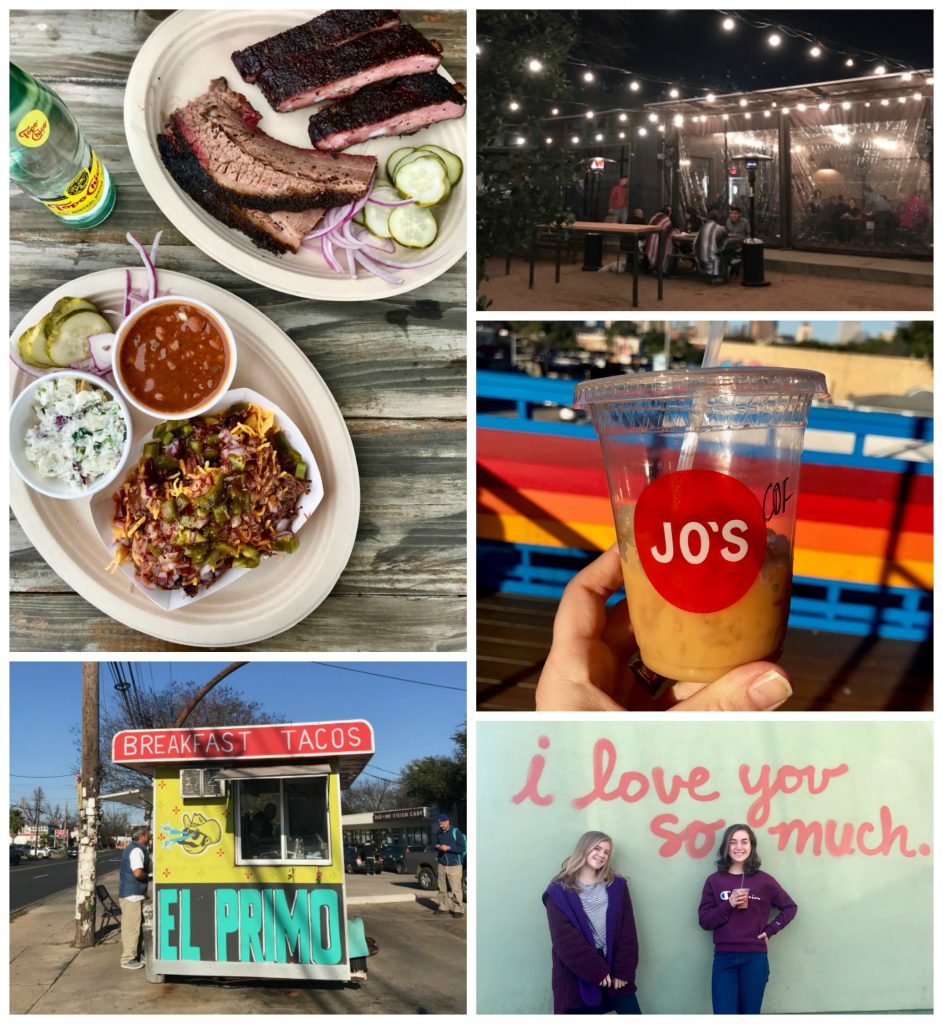 Traveling with teenagers is different than traveling with young kids, but one thing that never changes is that feeling you get when their reaction to experiencing a city or an adventure for the first time is exactly what you had hoped it would be. The first time I went to Austin — maybe five years ago — I remember wandering in and out of coffee shops and food truck lines and vintage record stores on South Congress thinking This city is magical. I can’t wait to show it to the girls. Last week, we took a five-day vacation there and I’ll never forget their reaction when our rental car turned on to that exact same strip, on a 70-degree afternoon with perfect skies: Can we get out can we get out can we get out? They might as well have been adorable five-year-olds again. But it’s Austin, so in this case, I’m very glad they weren’t. Here’s the highlight reel from the rest of our trip. 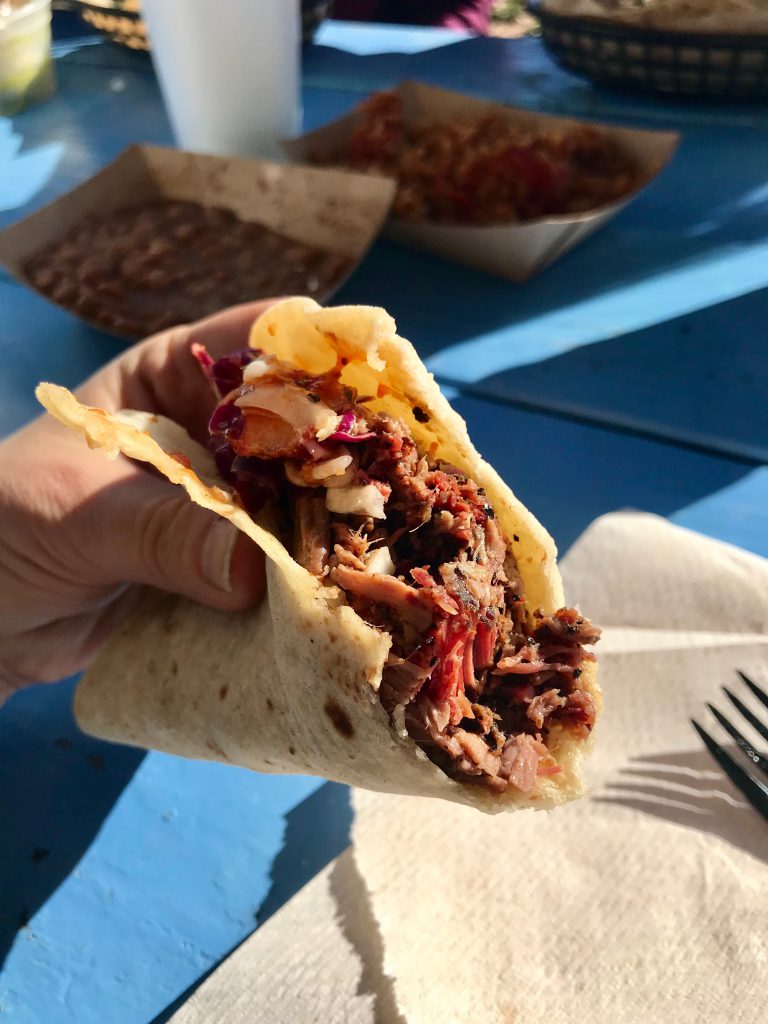 Highlight 1: Brisket Taco at Valentina Tex-Mex We headed here straight from the airport — this place is on everyone’s list, and we figured there would be a wait, but what we hadn’t counted on that wait being over an hour long. 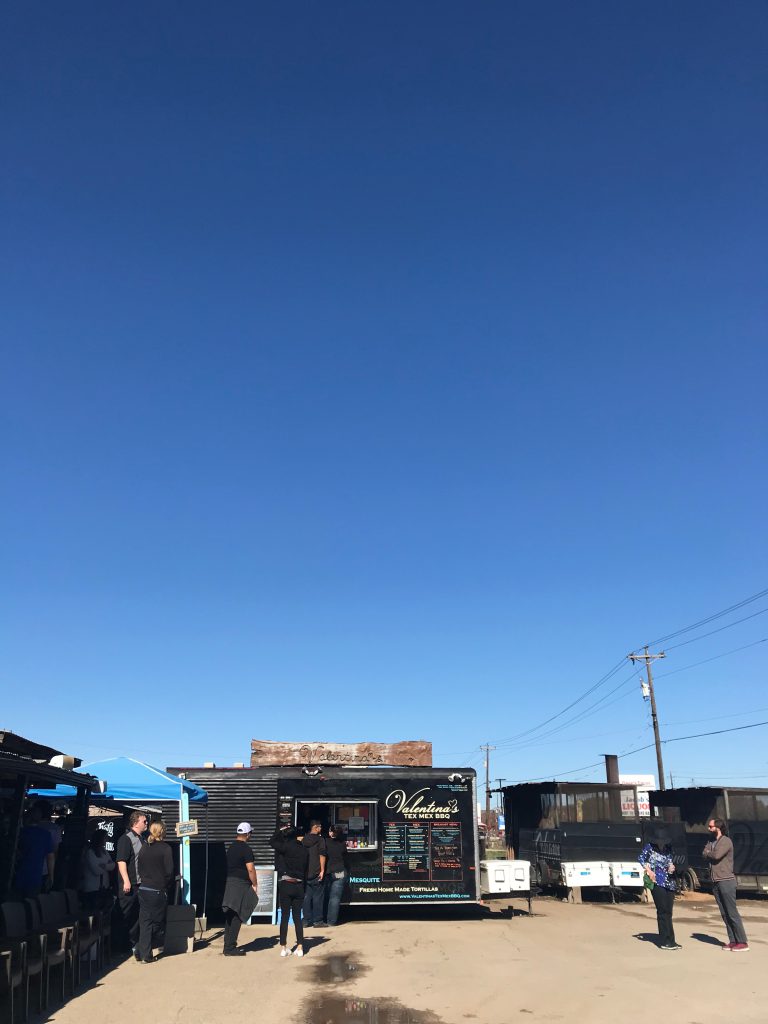 .
I can’t think of many things we’d wait that long for, but, again, it was 70 degrees and our airbnb rental check-in wasn’t for another two hours, so we just sucked it up and stayed. Plus, it gave us ample time to ruminate over a crucial decision: Tex or Mex? 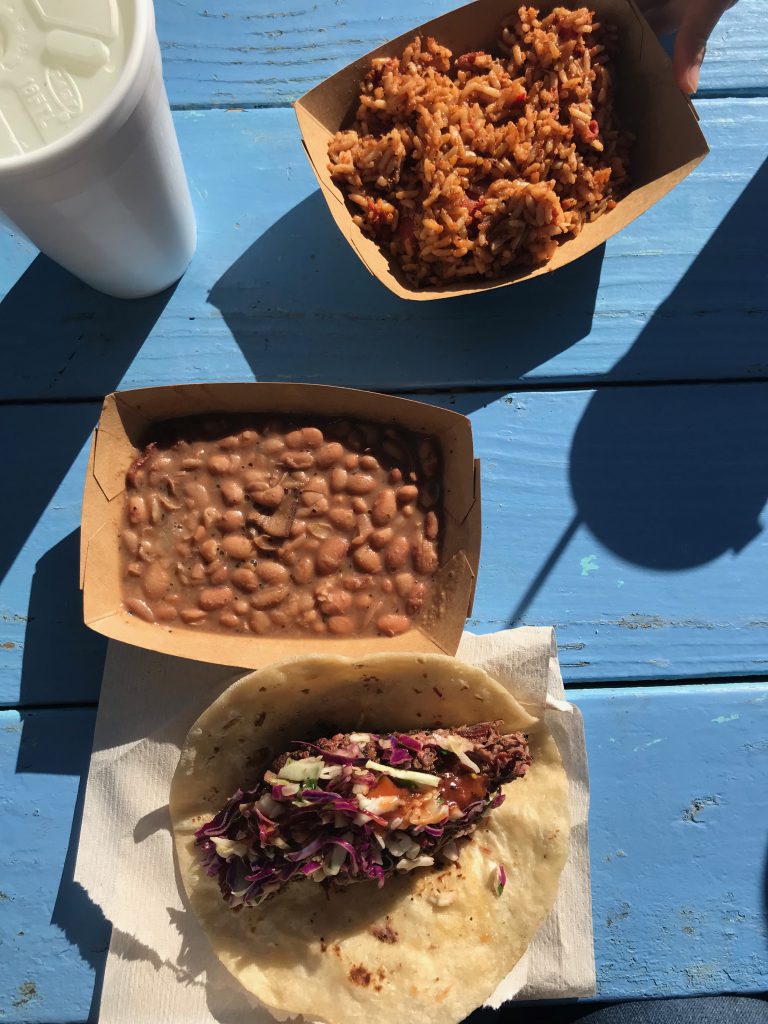 .
I went with a single chopped brisket taco and it was the best thing I ate all week. We also got beans, chips and guac, limeade, and Mexican rice, savoring everything on the first of many bright photogenic picnic tables. Do I need to tell you it was worth the wait? 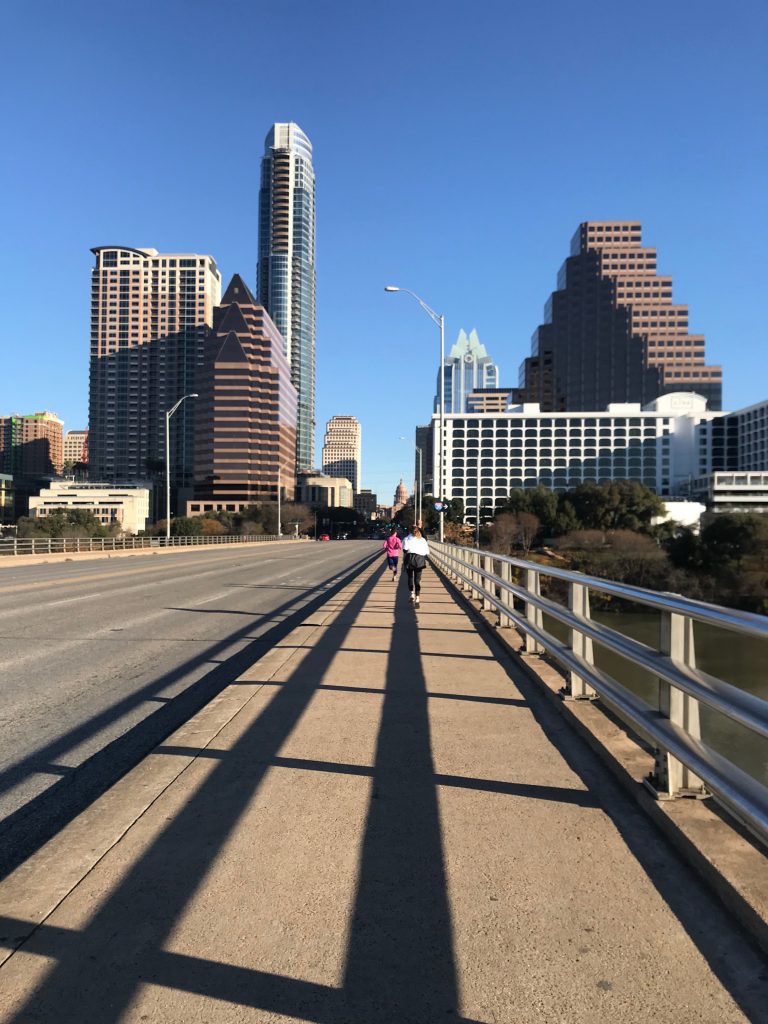 .
Highlight 2: Running on the River You know us by now and you know we take our morning routine seriously. At least two of us were up early every day running on the trail paralleling the Colorado River. I maintain that running in a new city is one of the best way to experience it like a local. The path was pretty, too. We did this a few times, always entering the trail right below the South Congress bridge then heading West. Afterwards, we’d meet at Jo’s Coffee up the road. I’ve asked it before and I’ll ask it again: Is there anything better than a good cup of coffee after you’ve worked out? 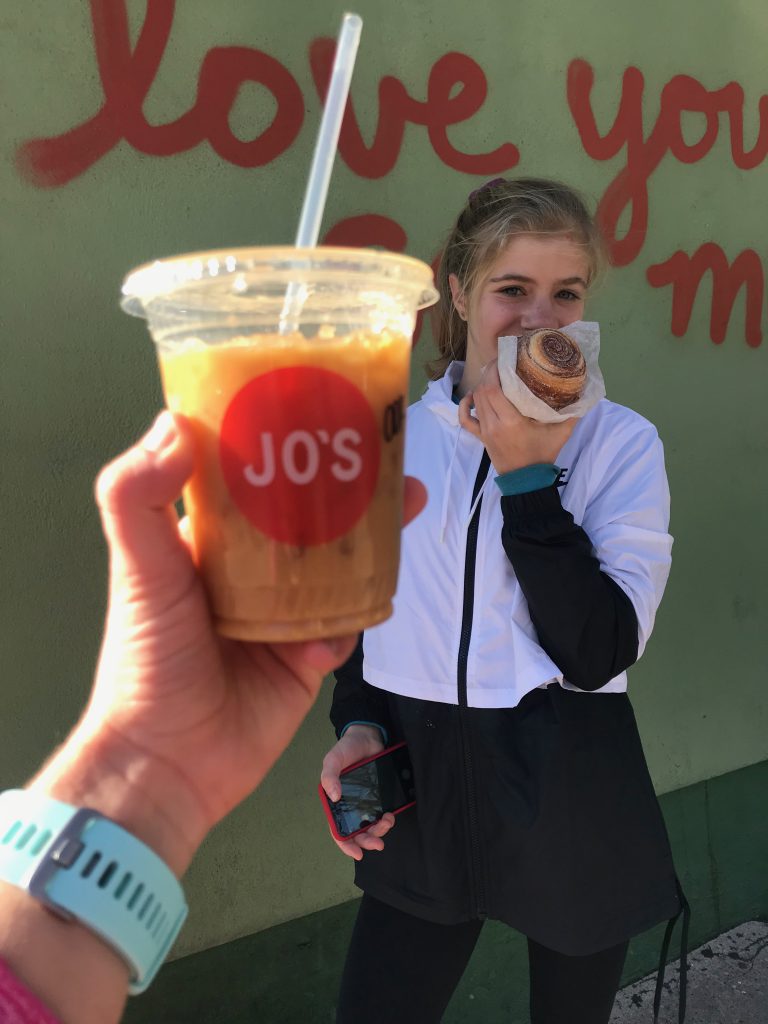 .
Highlight 3: Jo’s About that Coffee. Jo’s was the obvious choice on Day One, with its proximity to our airbnb and it’s much-photographed made-for-instagram “I Love You So Much” mural. The coffee had a distinctly caramelly flavor and Abby was smitten by their Guggenheim-inspired cinnamon rolls. The next day we went to Mañana in the lobby of the South Congress Hotel, and ordered killer lattes, but didn’t feel as distinctly Austin as Jo’s or Cosmic. (More on Cosmic below) 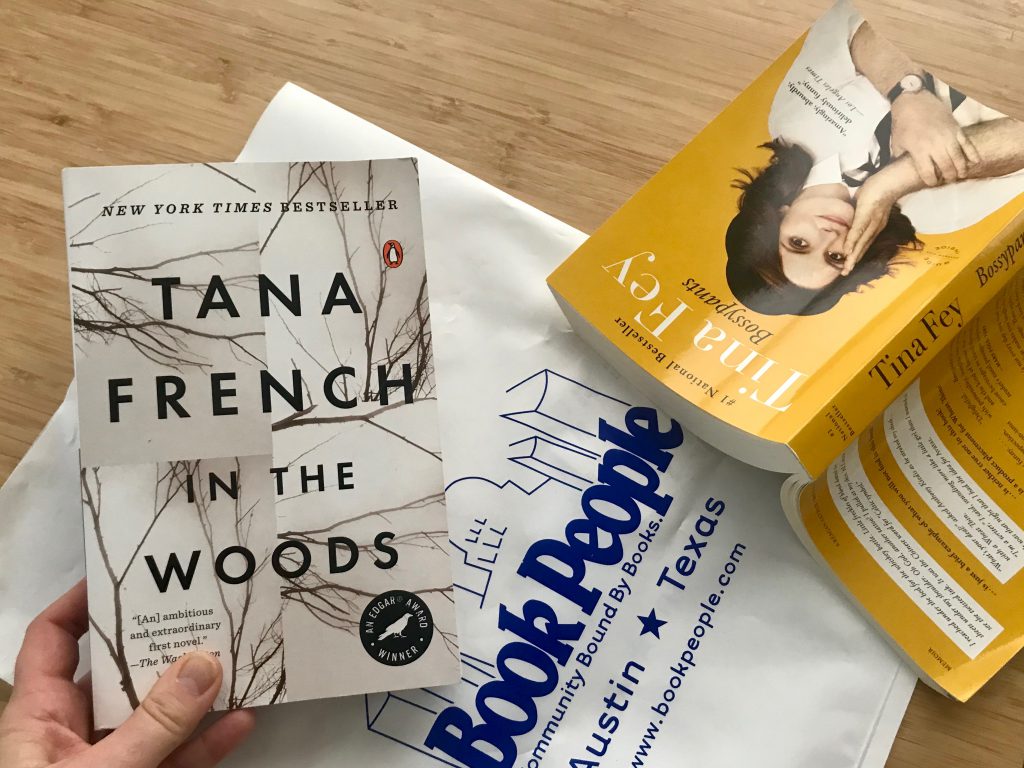 .
Highlight 4: Book People Why are you looking at an Irish mystery in a post about Austin, Texas? Because I bought In the Woods, by Tana French at Book People, the thriving multi-leveled indie bookstore in the heart of downtown, where we spent a good chunk of a rainy afternoon browsing the shelves and the wall of famous guests and authors. (And for those of you who begged me not to give up on TF after my Witch Elm experience, I wanted to show you: See I’m listening!) A trip here pairs well with a visit to Waterloo, the vintage record store a stone’s throw away. 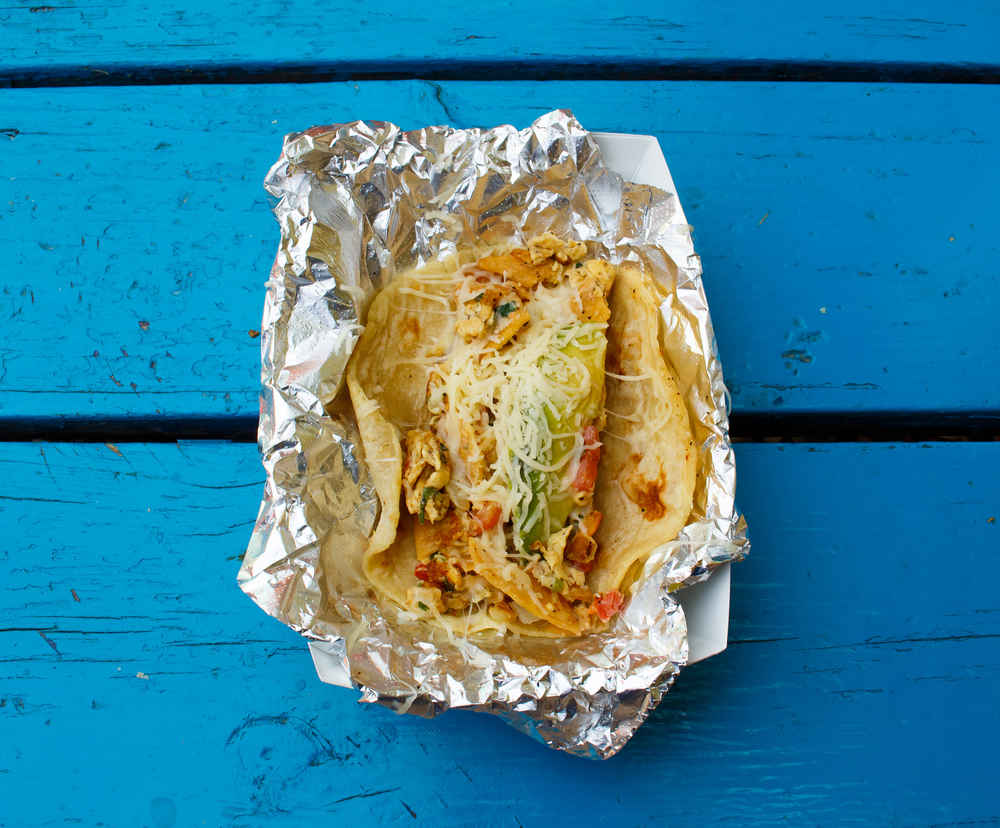 .
Highlight 5: Migas Tacos at Veracruz Technically this is not breaking news. I hit Veracruz last time I went to Austin and told you all about it, but the migas tacos were so stunning, I need to plug them again. I ate migas a few times on this trip, but only at Veracruz did they seem to get it perfect: the eggs were tender, not blistered and tough, a perfect base for the bits of crunchy homemade chips and jalapeños. If I can point to a moment of remorse on this trip it’s that I only got to Veracruz once. P.S. The rest of the family got pastor and fish tacos to much acclaim. (photo credit: Thrillist) 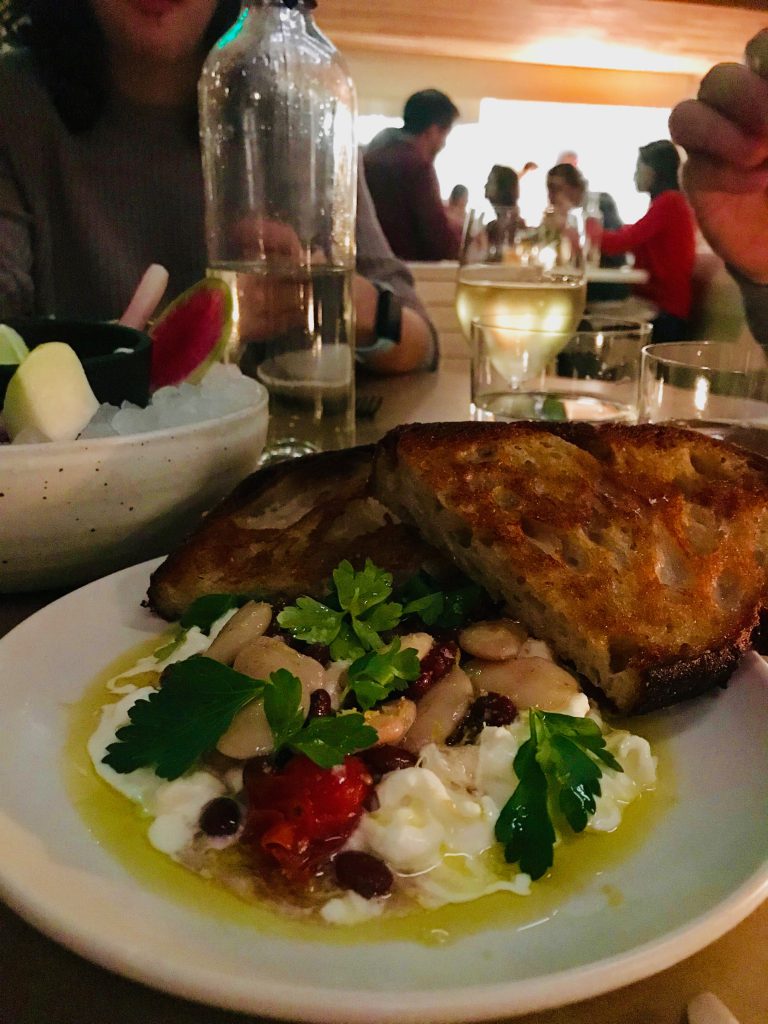 .
Highlight 6: Carpenter’s Hall As much as we are suckers for eating on picnic benches under string lights, we thought it would be a good idea to try a place where the tables weren’t pre-set with a roll of paper towels and a hot sauce squeeze bottle. Even before I booked the trip to Austin, I knew that place would be the brand new Carpenter’s Hall (part of The Carpenter Hotel). The room, in an old Union Hall, was golden and beautiful and after a few days of nothing but smoked meat, it was nice to go more “balanced,” (note: not vegetarian) with our ordering. The standouts were the fish-butter roasted broccoli, pappardelle with mushrooms, shrimp toasts, bean toasts, cavatappi. Also: A week later Andy is still talking about his Gibson with pickled okra. 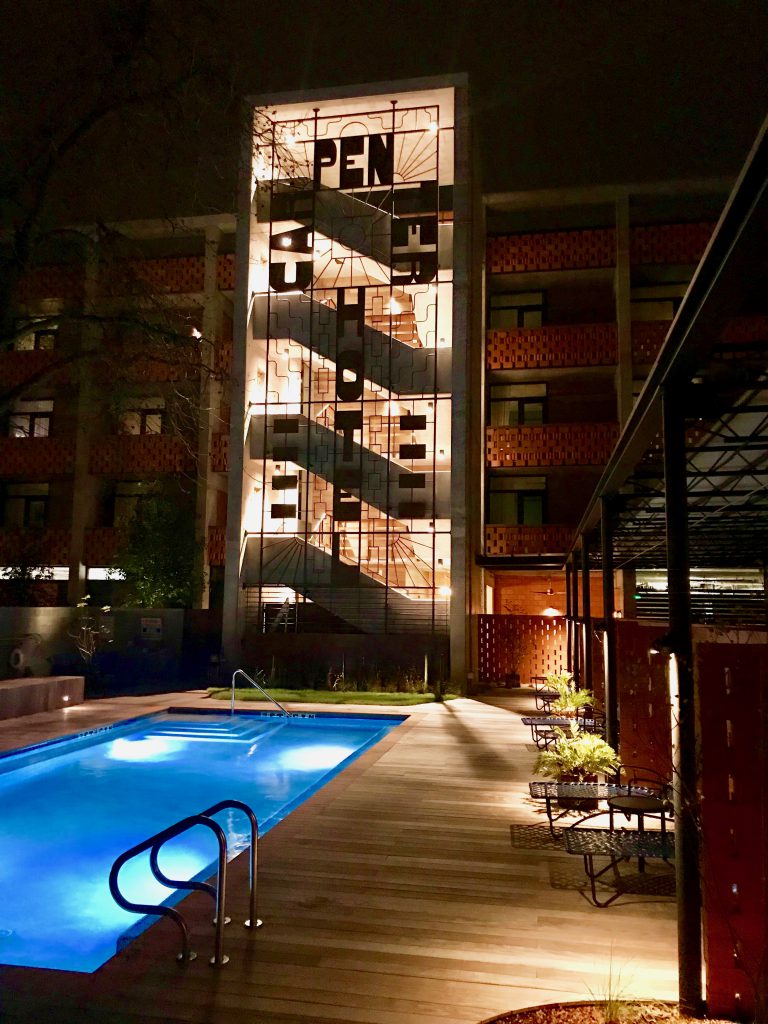 .
And here’s the hotel part. Beautiful, right? Next time, that’s where I’m staying. 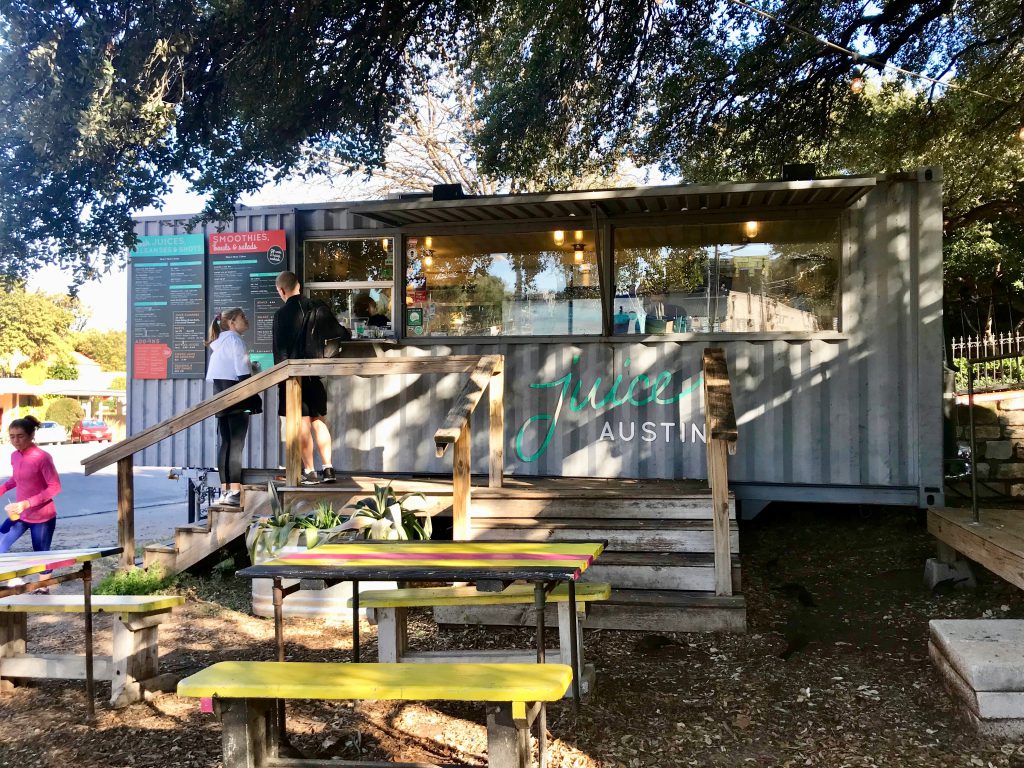 .
Another good way to break up all the hedonism? The smoothie bowls and protein shakes at Juice Austin, across the street from Jo’s coffee. (Phoebe recommends the Start Me Up, with banana pineapple, mint, and mango; Abby recommends the Kinduva Big Deal Smoothie Bowl with acai, mango, strawberry, and apple juice.)

.
Highlight 7: Enchanted Rock When we arrived, we knew our sunny days were numbered, so we took advantage of it and road-tripped two hours west of the city to Enchanted Rock State Park, an enormous dome-like rock that Andy hiked a few years ago and wanted to show us. Unfortunately, the park gets extremely crowded during certain weeks of the year, and this was one of them. We were turned away at the entrance. (This is why the photo you are looking at was not taken from the State Parks website and not by yours truly.) How is this a highlight exactly? It was not, but Andy insists you know it’s a worthwhile excursion (you can make reservations to avoid our fate), and plus the drive through Hill Country was all craggy trees and rolling hills, and on a beautiful day, there’s something to be said for a drive going nowhere. 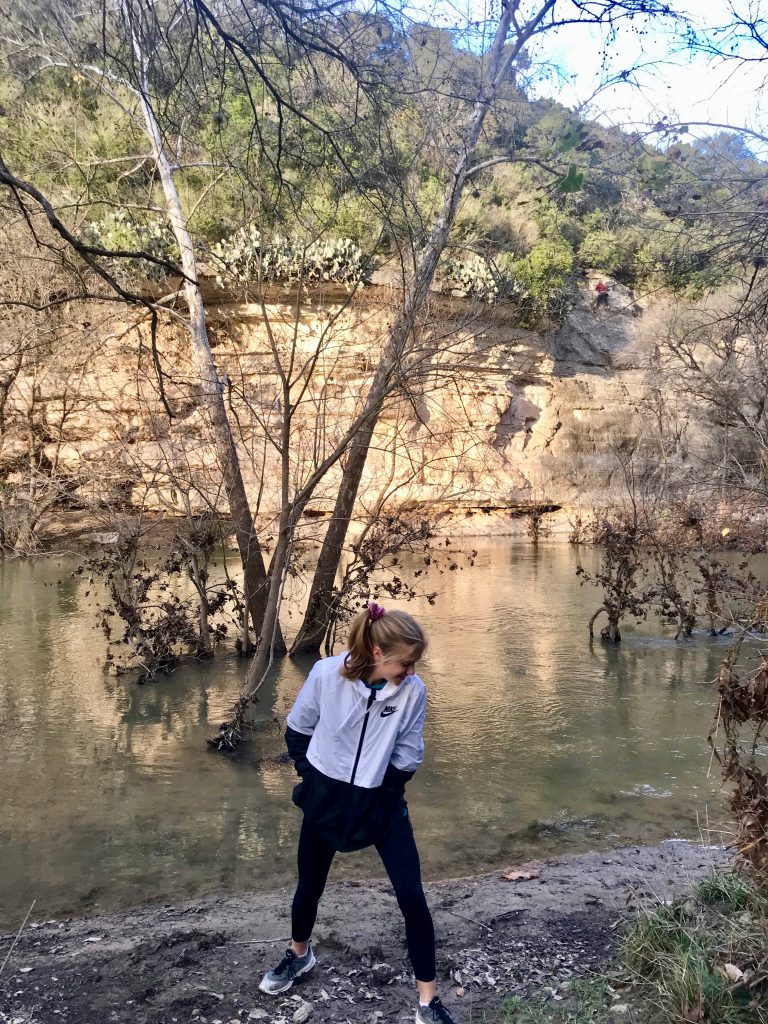 .
Highlight 8: Barton Springs Greenbelt. Back in the city, we managed to check the Outdoors Box with a quick late afternoon walk on the woodsy path along the creek. 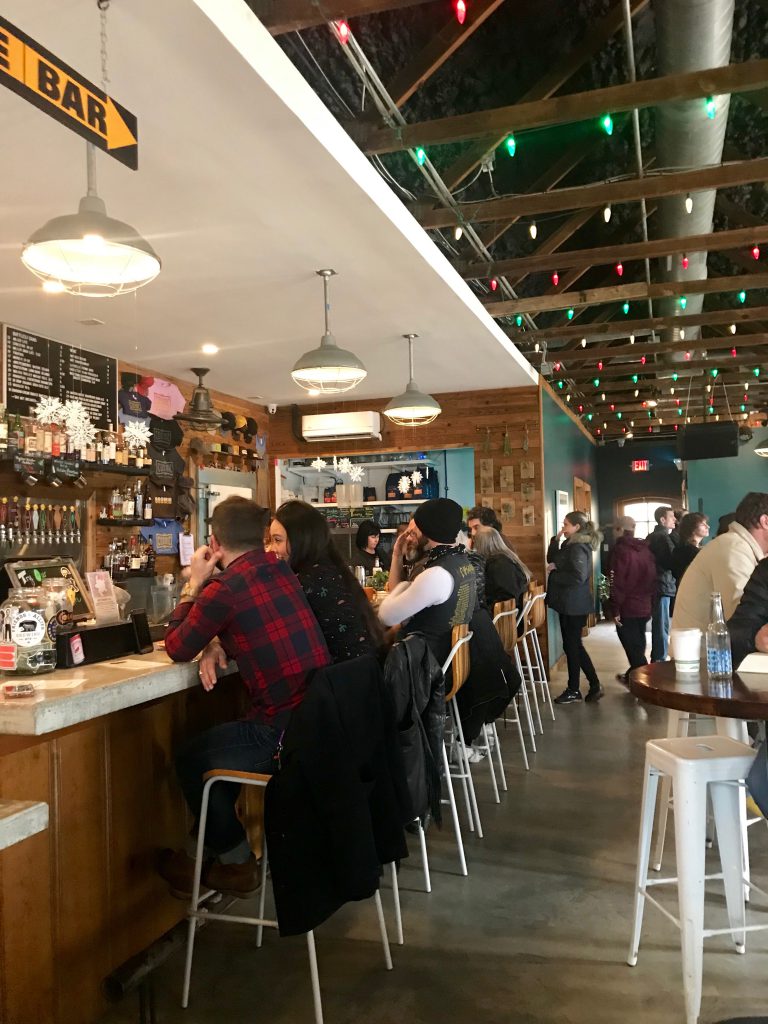 Highlight 9: Cosmic Coffee + Beer Garden If there was one place that embodied the Austin food scene to us, it was Cosmic, a coffee shop and beer garden with outdoor seating, and in the middle of a food truck court. The afternoon we walked in here to get a caffeine fix, “You Get What You Give (You Got the Music in You)” was blasting, and I don’t even really like that song, but for whatever reason it couldn’t have been more apt for the high-energy, happy vibe in there. (And I immediately plugged it into Spotify when we pulled out of the parking lot.) 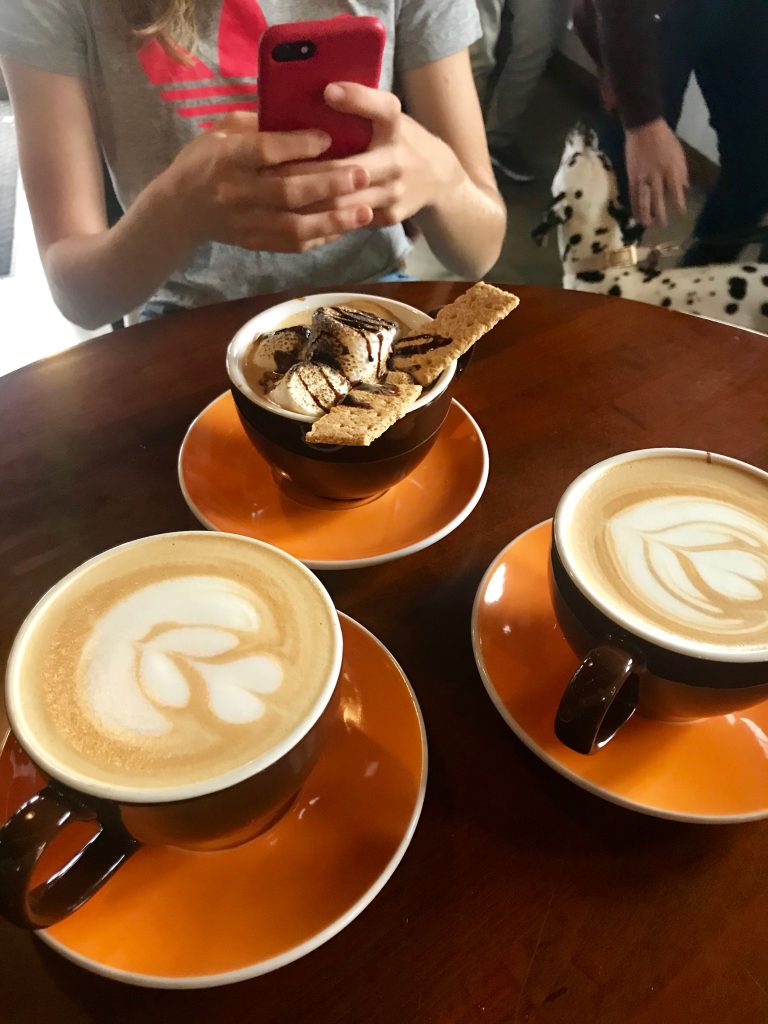 .
At Cosmic, they torched marshmallows on their S’mores Lattes, winning over the heart of at least one daughter forevermore. The next morning, we went back for breakfast and took advantage of the breakfast taco truck in the neighboring lot. Holy moly. Andy is famous for his superlatives, but I think this was the place where his “How Great is This City” declarations were the loudest and most frequent. 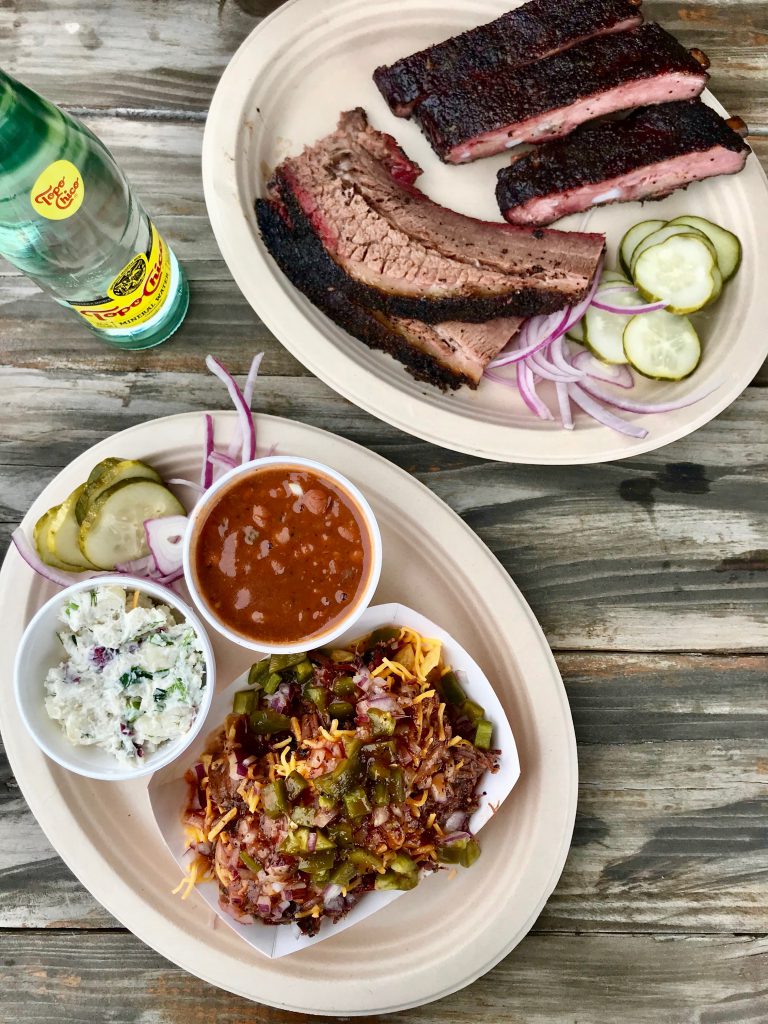 .
And a lightning round of other things we packed in or meant to pack in: FOOD Kerlin’s BBQ (above) Contigo, Clark’s Oyster Bar, El Primo (below), Manana Coffee (in the lobby of the South Congress Hotel), a drink at The Driskill, Rainey Street STUFF Stroll around the University of Texas (even if you don’t have a high school junior); A visit inside the Capitol Dome; Ellsworth Kelly’s Austin (so mad I found out about this too late!); NATURE Bull Creek Greenbelt, Wild Basin Wilderness Preserve 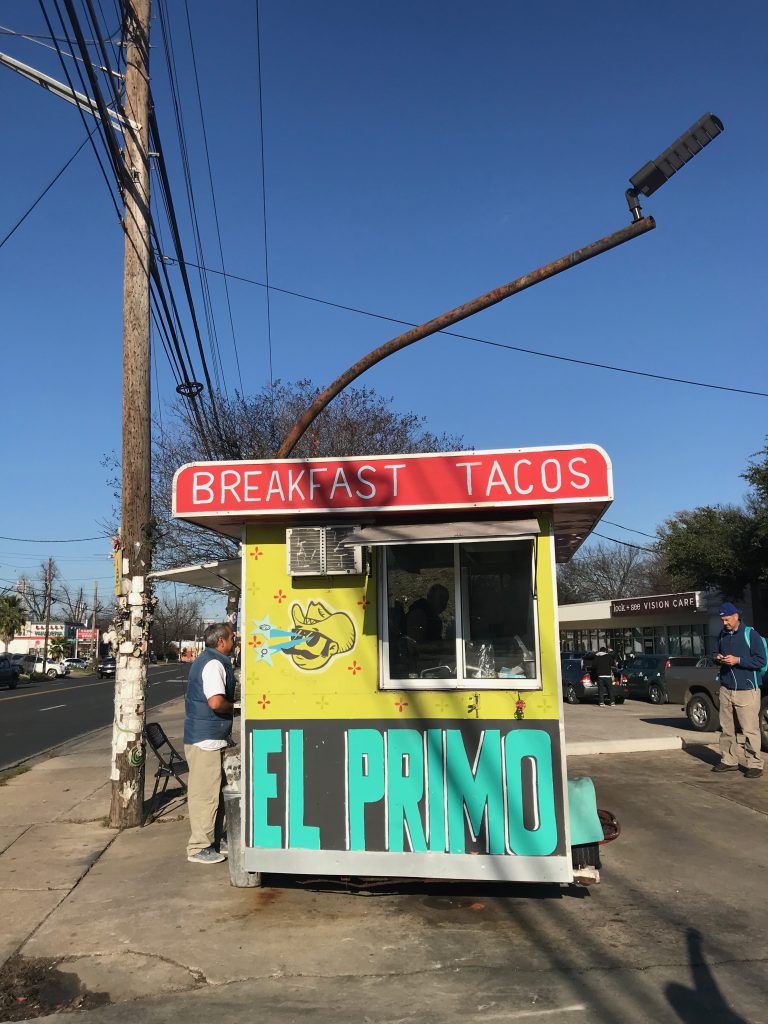 .
What’d I miss? Thanks, Austin. We miss you already!

Really love this. Thanks for all the great recommendations! Did you ever do a Sicily highlights reel (I may have missed it)?

Thank you Rachel. And no, I have not yet done Sicily highlight reel, and you have every reason to not believe me when I say this, but I PROMISE IT’S COMING SOON!

As an Austinite, I can’t believe no mention of Hamilton Pool! You also need to make a reservation. There’s also Jacob’s Well and a number of other swimming holes around.

I went to Sway Thai on my trip, based on a recommendation from your first Austin post. Loved it!

IN THE WOODS! I absolutely love that book and try to get everyone to read it! I hope you love it!

Love this going to Austin this year for our girls trip and I’m so excited and now have even more places to must see.

1. In the Woods is GREAT
2. Austin is just the best city, for Christmas two years ago my husband and I told my sister to pick a city for a girls trip and she chose Austin.
3. The best tacos in my life were from there, and also this Vietnamese/French fusion place that I still think about.
$. The Book Place is mecca. We were there for 3 hours and my sister doesn’t even read that often.

Ahh such a fun post! My mom and I were in Austin for a whirlwind wedding. We arrived late on a Thursday and flew out on a Sunday morning. But we managed to eat some really banging food! We loved Tacodeli, which is a chain but had amazing breakfast tacos. Amy’s Ice Cream, which my mom declared the best ice cream she’d ever had. And far and away, our most talked about meal was at the Farmacy. Farm-to-table in an old pharmacy that was saved from demolition by the neighborhood. We each got a different sandwich and shared both. Truly a food highlight. Wish we would have had more time. And also that there hadn’t been a water restriction while we were there. No coffee!!!

Did you miss Torchy’s tacos? Next time!

Finish reading In the Woods and go on to The Likeness. Apparently Starz is filming a show based on those two books called Dublin Murders, coming out this year! Can’t wait!

My favorite thing about Austin is the music in the Austin airport. Austin City Limits comes to tired travelers. The down side is hard to find anything vegetarian at the airport. BBQ all the way.

Can you please recreate the Bean Toast? It looks so good.

Justine’s Brasserie is one of my favorite restaurants in Texas (as a former Texan!). The atmosphere is dreamy and the escargot and ratatouille are delicious paired with some good red wine and company. <3