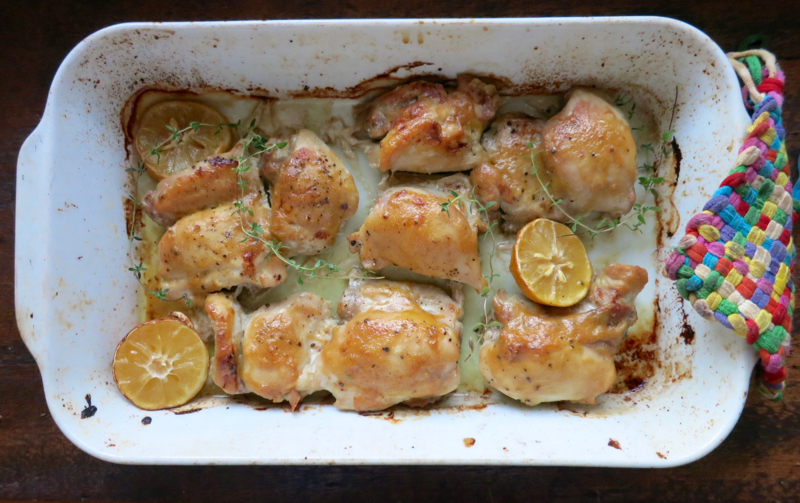 It’s a little crazy how long it took me to come upon this rather basic chicken dinner given my 13-year-old practically short-circuits with glee anytime she sees honey-mustard on a menu. A green salad tossed with honey-mustard dressing? Heaven. A fleet of deep-fried chicken fingers served with honey-mustard dip? Jackpot. Now that I think about it, I’m pretty sure her favorite swimming pool in the county is not the heated one with the slide and diving board, but the one with the snack bar that dispenses honey-mustard in a giant pump right next to the Heinz. (All the better to drench her French fries with. Not lying.)  So I knew what I had to do when I came across the honey-mustard chicken wings in Lucinda Scala Quinn’s Mad Hungry Family….Dog-ear the recipe for later, because I didn’t have wings. I did, however, have package of frozen chicken thighs thawing on the counter, a jar of honey, a jar of Dijon, a bunch of end-of-the-week vegetable scraps, and about an hour to turn it all into dinner. Which I did, and will do again very soon if my daughter has anything to do with it. 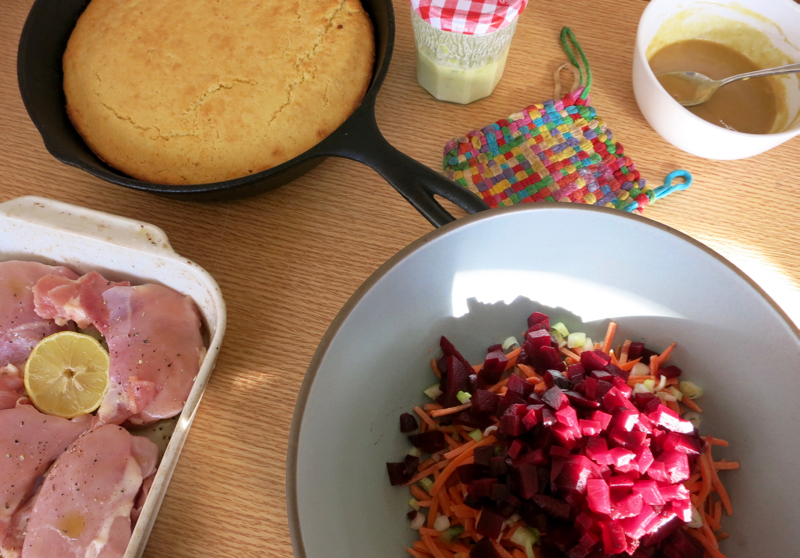 Honey-Mustard Chicken
I was feeling ambitious and served the chicken with skillet cornbread and a carrot-beet-scallion slaw tossed in a yogurty herb dressing, but there should be nothing stopping you from just throwing it on a plate with rice and raw carrots if that’s the kind of day we’re looking at. This recipe was inspired by the inspiring inspiration-filled Mad Hungry Family. (P.S. If it had a cousin, it’d be this one.)

Preheat the oven to 425°F. In a small bowl, mix together mustard and honey. Place the chicken into a roasting pan or baking dish and brush or spoon olive oil on top. Season with salt and pepper. Nestle lemon halves in between chicken as shown. Roast in the oven for 25 minutes, then brush honey-mustard mixture on top. Roast another 15 minutes until chicken is golden and cooked through. Squeeze lemon juice all over and serve with fresh thyme if desired.

This looks delicious! My husband is similarly a honey mustard fiend. Unfortunately he is somewhat thigh-averse. Could this be done with chicken breasts? Would you do boneless/skinless or bone-in/skin-on? Thanks!

Maybe some other people can weigh in on that one, but I’ve never had luck baking chicken breasts; no matter what I do they end up drying out. But you can always make Grandma Jody’s (pan-fried) chicken cutlets and dip them in honey-mustard (using a 1 to 1 ratio of honey to mustard). It’s a little more laborious, but would obviously be delicious.

My husband is thigh adverse too. What is up with that?!

I tenderize chicken breast in milk in the fridge for several hours– 2-8ish, not more than that. Not sure where I learned that, maybe even from this blog (?). You can season them in the milk or afterwards. Then remove from milk, season or add sauce, and bake at medium temp (325ish). They come out nice and plump and juicy. Nearly foolproof!

I can’t wait to try this!

Honey mustard chicken is a staple in our house too. It guarantees that my 2 year old will eat dinner that night. Everything will get dipped in the honey mustard sauce.

But what is your skillet cornbread recipe?

I’ve used the Silver Palate cornbread recipe as long as I can remember (omitting the bacon). Instead of baking it in a loaf pan, though, I tried buttering the hell out of a cast iron skillet to see what would happen. Not that much different, and will enlighten if I come up with something as moist and crispy as I’m imagining it to be. In the meantime, here’s the SP one if you don’t have the book: http://www.cookstr.com/recipes/crackling-corn-bread

Thanks! I’ll give it a try!

The way to get the crispy edges is to put the cast iron pan in the preheated oven, then add a Tbs or two of salted butter, then pour the batter into the hot buttered pan.
The butter spreads out and comes up the sides and makes these amazingly delicious salty buttery crispy edges as it bakes.

This dish is on our regular rotation and often solves the inevitable, “how should I cook the chicken I defrosted?” question. I normally use bone/skinless thighs and tuck in some rosemary since thats what grown in my backyard but regardless it never disappoints.

Jenny! You always have the answer I am looking for! I needed an idea for a quick and easy protein for tonight’s dinner. I was feeling uninspired, so of course I came to you. Lo and behold: you have the perfect answer. I love honey mustard as much as your daughter and I can’t believe I haven’t tried a recipe like this before. Thanks!

Glad to help out Beth! Thanks for checking in.

Well this looks pretty perfect. My boys love when something looks “fancy” like this– they will pretend it’s a feast at Hogwarts 🙂 I’ve been eyeing that cookbook…. May just need to check it out!

Ahhh, my favorite way to cook salmon (we’re pescatarians at my house). I add potatoes to roast along with the salmon and sometimes asparagus roasts alongside as well. Line the sheet pans with parchment and there’s barely a dish to wash.

I made this tonight and everyone loved it! I think the sauce would be really good on fish too. Thank you, Jenny, for this new family favorite!

Yes to everything about this post, but we are all overlooking the AMAZING “loop” potholder that I must have made a million of in the 80s! Love it!!

That looks delicious! I am trying it tonight! Can you please share the recipe for the slaw and dressing? Have a great week!

Hmmm. Any ideas on how to make this work with tofu? I’m betting it would be a slam dunk in the “will my toddler eat anything tonight?” game…

I too would love the recipe for the beet slaw with yogurt dressing because I am not a throw together kind of girl. The chicken was delicious!