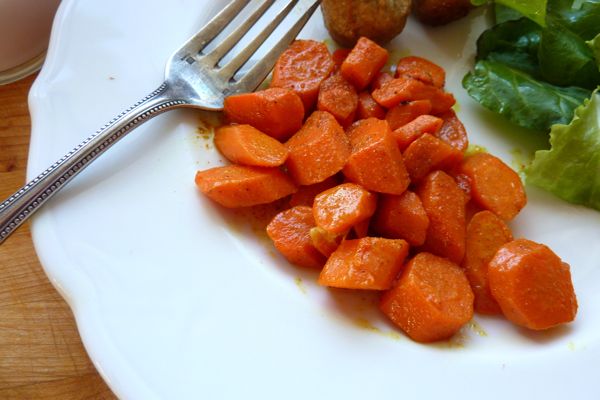 “This looks amazing,” my friend Mike said, as we sat down to dinner. He was in town on business, and Jenny was at a work event, so it was just me, Mike, and the kids, rocking out on a Wednesday night. On the table: chicken tandoori burgers with a yogurt-mint sauce, sauteed spinach, curried carrots, and the remnants of some math homework. “Man, if we could eat like this every night…”

Mike’s one of my best friends. He’s a smart guy. He’s also an extremely talented writer with some serious — and rare — powers of observation. He’s crazy insightful. His stories, as they say, get at the deeper truths. He’d just spent the last 30 minutes, standing in our kitchen, getting his gin-and-tonic on and watching me put this dinner together. How had he not seen how unmagical this really was? What had I done that could have possibly suggested this was hard, or complicated, or beyond his skillset? In some ways, this was like watching a friend back his car out of his driveway and saying, “Holy sh*t, dude, you are amazing! How did you do that?” It’s not that I don’t enjoy a good, undeserved compliment — and oh, how we love a gracious guest — but I can’t, in good conscience, let this perception stand. I can’t let Mike get away with acting like what we’re doing is hard. The big secret here is that most of the stuff we make on any given night is simple, requires very few ingredients, very little prep time, and no expertise (which I don’t have, anyway, at least not in any real sense of the word). All it takes is will, and a little planning ahead. This was no exception.

“God, these carrots,” he said, taking a bite.

The tandoori burgers take all of 20 minutes. The yogurt sauce is plain yogurt spiked with a handful of chopped mint. The spinach is sauteed in olive oil for three minutes, with a clove of garlic, and then topped with a squeeze of lemon juice and some salt. And the carrots he was talking about? Our Boston Terrier, God love her peanut brain, could make them with one paw tied behind her back. Here’s how I did it: I peeled four carrots and cut them into quarter-inch rounds, and tossed them in a pot. I added 1/2 cup of water, 2 tsp of curry powder, a small pat of butter, some kosher salt, and a squeeze of honey. I simmered, covered, for 15 minutes. That’s it. 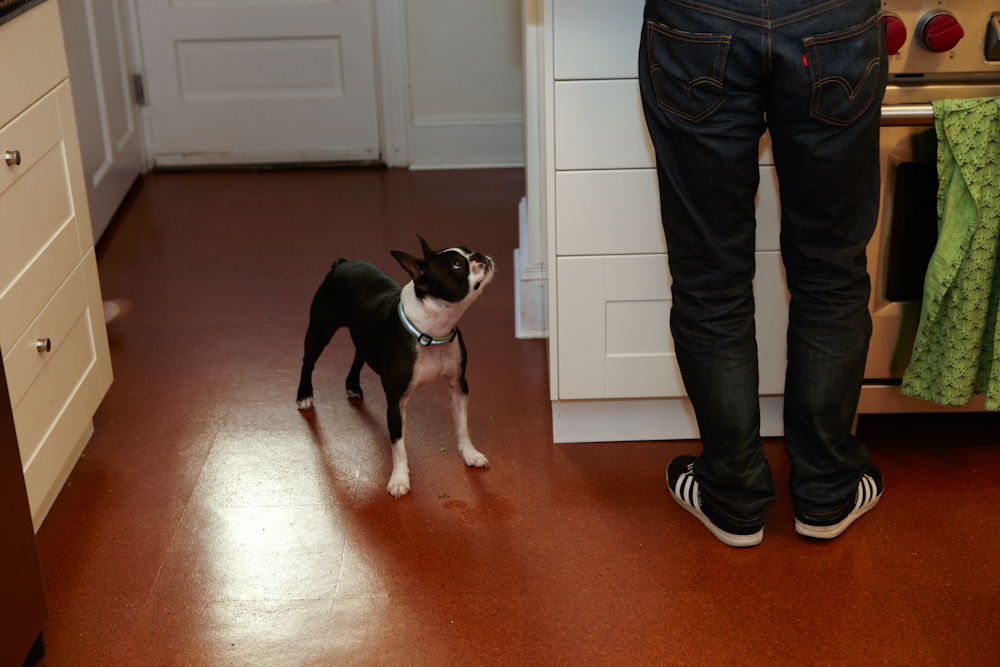 Iris takes notes on preparation. “Yeah, I got this,” she says.

Too funny…and now we know the secret ingredient to those magical carrots: iris’ paw prints!

the hard part is planning, for me.
the deciding beforehand to make this, this, and that, and then making sure you have all the stuff you need for it all. is there a magical secret to simplifying that process?

Love this post. I spend half my life trying to convince people how easy it is to make dinner basically from scratch every night. I always get answers like, “Yea, but you LIKE to cook.” or “Yea, but you’re good in the kitchen.” Seriously? I just tossed four things in a crockpot. Beyond easy. That salad you’re eating? The dressing contains THREE ingredients. That you shake in a jar. Forget Bobby Flay, Martha Stewart, Paula Deen – at least at first. Just cook. It really isn’t complicated.

No I get it. You had all the ingredients on hand and you had actually planned ahead, right – like you had the ground chicken and carrots? So to some it seems like you pulled this meal out of thin air, but there was some planning ahead to it. At least this is what I think is the big mystery to some folks, the planning ahead. To me (and you) it seems so easy because we’ve been doing it for years. But for those fly by the seat of their pants people, this may seem like a hard task. Mystifying… yes. Rocket science? Nope.

My mom always said “If you can read, you can cook.” But that being said, I view my friends who know how to garden as though they have invented space travel. And then they laugh at how impressed I am by it.

No- this stuff is easy to you and me because we do it all the time and we enjoy it. Yes, you have to plan ahead, but I think it’s mostly about experience and technique. I’ve always got carrots, ground meat, green veg of some kind around and I cook at least one hot meal each day for my fam of 4. That adds up to 100’s of hours of cooking that I’ve done, albeit with some failures, but it’s definitely a learning process. My husband is smart and can do many things better than I. But he constantly marvels at how I can multi-task in the kitchen (chop/prep/season carrots-season/form/cook ground meat- prep and cook green veg-combine ingr of yogurt sauce). There’s actually a lot going on here. We’ve just done each of these steps so many times it’s like old hat. Think about if you had to think about EACH little step in this process, or worse, had to read each step out of a cookbook, which means it takes 3x’s longer. It’s an art, man!! It just comes with experience!

Hi Andy – I’m going to make these carrots for dinner, but will be using baby carrots. Would you say you had 3ish cups of carrots once yours were cut up? Thanks for posts like these. For a rookie mom and dinner preparer they are wonderful!

Hi Jami, I would say less. I would say I had 2 cups of carrots, but it doesn’t really matter. You just need some water in there, so they can simmer. 3 cups will work fine. Good luck!

This –
“The big secret here is that most of the stuff we make on any given night is simple, requires very few ingredients, very little prep time, and no expertise (which I don’t have, anyway, at least not in any real sense of the word). ”
is one of the main reasons I love this blog!

I love this post for the reminder that with a little planning I can pull these things off too (and the carrots will be made this week, thank you) but also for the links to your friend’s work. Sometimes I like to think that maybe one day I will be a writer (of what, I’m not sure). Then I read The Man Who Sailed His House and think, or maybe I should just leave it to the people who are really, really good at it.

i agree with amanda– it’s not rocket science, but like most things it is a skill.

Amelia — not unless finding a half hour involves magic (which admittedly it sometimes does…). I get up early on Saturday, sit down with the sale flyer for my grocery store, and make the week’s menus. I usually start with what’s on sale and what’s in season. I look through my recently bookmarked recipes or my stack of “usuals” for candidates based on those main ingredients. That list gets adjusted for how much time I’ll have that week. Then I make the grocery list out of that.

Like a lot of things, it gets easier once you make it a habit.

I logged in to comment because I think this post is so right on, and I need the reminder. But reading the other comments I think Laurie makes a good point too. It is easier than someone inexperienced might think, but it is definitely harder and more involved for someone with less experience. I’m starting to reach a place in my cooking where I’ve figured out better, faster, more efficient ways to do things. I’m more comfortable playing with recipes and eyeballing amounts instead of always measuring and it’s really starting to click how easy cooking can be. So I am getting faster for sure. But it’s taken a good deal of practice to get to this point. Thanks for reminding me that cooking doesn’t have to be overwhelming and time consuming!

Sarah, Amanda, Laurie, Ladidah — You guys all make a very good point and I think I conflated some stuff here and confused the message. The dinner I made, taken as a whole — the different components, the planning, the recipe procuring, the timing — that’s not dog-simple. (And yet: I do believe, eminently doable.) But take any one of those components, in this case the carrots, and it gets pretty simple. The carrots are not hard, no matter how inexperienced you are. There is no technique here, no ingredient that is hard to find, no real planning ahead. The idea is, we just assume things are hard, or beyond us, sometimes, when it reality we are more than capable. My friend Mike has cooked for me; he is capable, and yet he assumed this was hard. Why? I think a lot of it is just forging ahead and trying it. Anyway, glad we’re even talking about this. Thanks.

Do I win the Getmainelobster.com feast?

I just made these carrots. I’ve made them three times in the last three days, because that’s how much we love them! Unbelievably simple, and deliciously good. We’re both spice fiends so a little more cumin and cayenne did wonders. Next time? I’m adding the ginger (mm, ginger). Thanks for the inspiration!

Lately I’ve been adding a handful of raisins to this recipe as it simmers, putting everything on storebought naan bread, and then topping with toasted almonds and a drizzle of plain yogourt (seasoned with s & p) for a super easy, meatless main. So good.

I made these carrots for the first time the other night and they went down like candy! Thank you for opening our kitchen to a new seasoning – I never cook with curry but now these carrots will be a staple.

Long time lover of the blog and your books. Shockingly had never made these carrots until last night. Everyone at our dinner party raved about them. They were truly delicious.