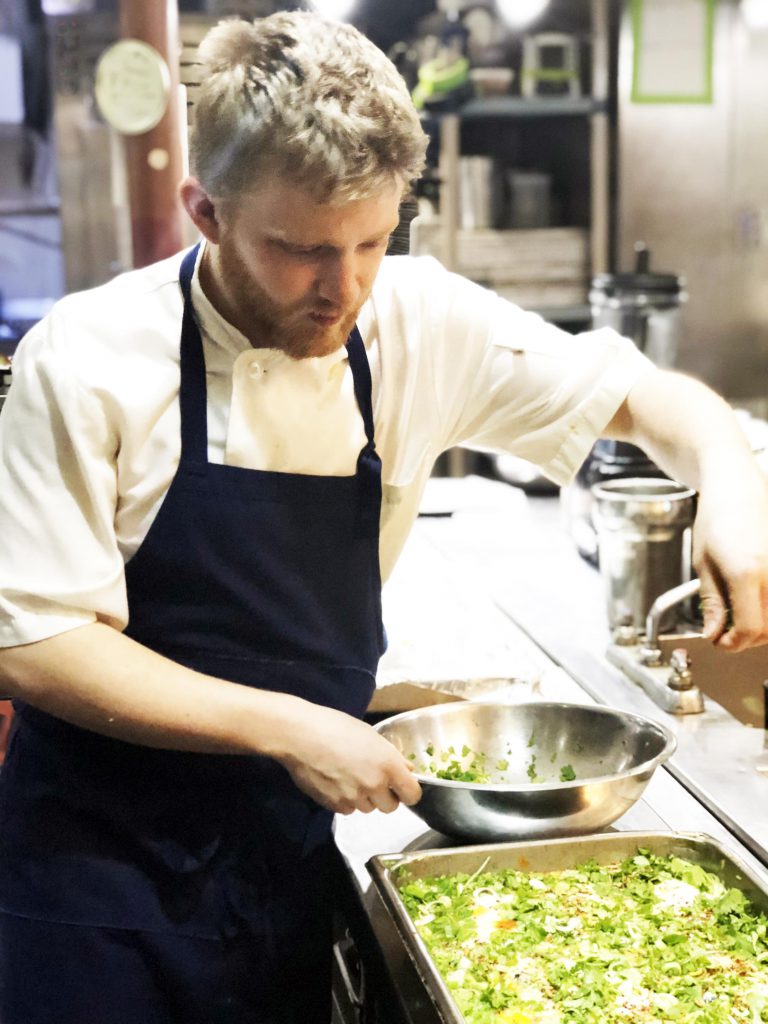 When it comes to entertaining, I go through phases. Some nights I am the cook who craves adventure, who embraces an all-day culinary bacchanlia. More frequently I’m the kind of cook who just wants to keep things simple, the one who emails a friend a few hours before dinner “Come over for some spaghetti and meatballs,” because spaghetti and meatballs are low-pressure, delicious, and beloved, so how can it not be a win? Then there are some times like right now, when I just can’t seem to motivate to do anything except pour the cocktails and order in pizza. But what counts is that I’m connecting with humans no matter what the food is, right?

Of course, but I’m craving inspiration on the entertaining front these days, so in the next few posts, I plan to feature some ideas to wedge me out of my rut.

For starters, last week, I got a chance to talk to Nick Hukezalie (pictured), the Chef de Cuisine from New York’s Blue Hill, a longtime favorite destination in the DALS house (and the city cousin to Blue Hill Stone Barns near me in Westchester.) I was reminded of the “Family Meal” ritual in the restaurant world, and how there are people out there — professional people, but people nonetheless — who are in charge of feeding dinner to an entire staff, only a few hours before its doors officially open for business for an onslaught of more people who also expect to eat. For those of you unfamiliar with Family Meal, it’s when the staff (servers, chefs, line cooks, everyone) sit down to an early dinner to go over the night’s specials, discuss upcoming events, and, most importantly, get a reprieve from their intense, physically-demanding workdays. “It’s requirement,” says Hukezalie, who finds special meaning in the act of breaking bread with his coworkers. “There’s no option. You can’t just stay and work. Everybody has to stop half an hour. Everybody sits down.”

Unlike, say, the Dry-Aged Bolero Carrot Steak that paying customers will later order off Blue Hill’s menu, the food at Family Meal tends to fall into the easy-to-scale category — comfort foods, simple foods, or dishes that require spinning gold out of whatever is about to go to waste in the walk-in. “Some days we’re very busy, and it’s veggies and pasta, and it’s nothing special,” he says. “But some days, everybody gets to be a part of it, and everybody gets to experience a new person’s culture or try something that nobody’s ever tried.” Before long he is far away in dreamland recalling last month’s fidueà, a Valencian paella made with noodles instead of rice; and the arepas, made from scratch by an extern from Venezuela; and the chicken mole served by one of the prep cooks from Mexico. (“You can tell he loved it a lot.”)

So I asked Nick if there was anything from all his years observing, preparing, and enjoying Family Meal that the everyday entertainer could apply to her own life. Here’s what he told me.

Be Flexible. In a restaurant kitchen, just because you want to make a chili doesn’t mean you’re going to get all the stuff that you want. It’s really a pantry raid every day before family meal. Somebody will go downstairs to the fridge or find some stuff that’s starting to turn or anything leftover that we have, scraps that we’ve been prepping for the menu, and that all just ends up in family meal every day.

Think Soup. Whenever we have just the biggest hodge podge of stuff, and we have no idea what to do with it, we normally turn it into some kind of soup; a lot of times minestrone, you just need a can of tomatoes and a bit of pasta and every vegetable under the sun, and it makes a great soup. That’s one of our favorite rainy day easy family meals. That and some good crusty bread and everybody’s happy.

Pick Hallmarks. I think there are things that everybody loves. Not everybody is going to love a liver stuffed chicken breast, but everybody loves spaghetti and meatballs. Everybody loves those classic hallmark dishes that can be hard to make really really well, but when you pull them off, they’re just so good.

Spice it Up. Something else that we keep around that really makes everything easy — especially on those really really busy days when we don’t really have time — are spice blends. Chinese spice, curry spice. There’s a great store in New York called Kalustyans and we go there a lot for pepper and black pepper and normally, whoever goes will pick out a new spice mix. So we’ve been toying with something called Berbere, a chili-based spice from northern Africa. It’s real easy to make a stew of vegetables and maybe a little bit of meat, and dump some spice in and add a starch, and that’s a great family meal. It’s intense and complex and something new, and it’s really easy to just make it happen in a few minutes.

Pick a Show Piece. Pick one thing to focus on — so like a roast or grilled wings — and then make sure everything else is easy and comfortable, and you can make it happen with your eyes closed. You can’t spread yourself too thin trying to make everything elaborate.  If you can really focus and dial it in on that one thing, then that’s going to be amazing and everybody’s going to talk about that. You can do it with really basic foods, too. For instance, me and the sous chef spent all day making the meatballs once and everything else is just simple — roasted vegetables and salads. Even though they’re just meatballs, that’s what we really decided to focus on.

Eggs Aren’t Just for Breakfast. We don’t always have a pork shoulder or leftover fish, but we do always have eggs. We love making Shakshuka, an Israeli dish made with a spicy pepper and tomato sauce that you spread out in a pan, crack some eggs into and throw in the oven for a few minutes. It’s really great, and also really simple, and you can put anything you want in there. It doesn’t have to be traditional peppers and tomatoes.

He was nice enough to share his recipe below. Thanks, Nick!

Shakshuka for a Crowd
At its simplest Shakshuka can be prepared with leftover tomato sauce, a few spices and the requisite eggs cracked on top. Blue Hill cooks relish it as a vehicle for leftovers–vegetables, herbs, cheese scraps, any ingredient that’s ready to leave the walk-in. The dish is quick and easy to prepare (30 minute or so), and great any time, day or night. Note: If you don’t have a skillet large enough, you can transfer the tomato-vegetable mixture to a baking dish and proceed as directed. Recipe by Nick Hukezalie, Chef de Cuisine Blue Hill New York. Serves 6 to 8

Over a high flame get your large (preferably iron) ovenproof skillet ripping hot. Working quickly, add olive oil to the skillet, immediately add onions and stir so they don’t burn or stick.

After one minute, add the peppers, veggie scraps and garlic, and season with salt, cumin, and paprika.

Continue to cook the vegetables until they start to soften and get a bit of color. Add the chopped tomatoes and harissa and reduce the heat to a simmer for 10 to 12 minutes until the tomatoes release liquid to form a sauce. Remove from the heat, stir in 2/3 of the herbs, taste and season.

Using a large spoon, make small,  evenly spaced wells for each egg. Crack the eggs directly into the wells. Season the eggs with salt and pepper. Sprinkle the cheese over the saucy parts of the dish and drop the pan or casserole in the oven. Shakshuka is ready when the egg whites are just set and the yolks are runny. Note: The eggs should be a little jiggly.

Top with remaining herbs and serve with crusty bread or pita.

i love this. i have been reluctant to have people over if i’m not going to spend all day in the kitchen making something sort of elaborate or time-consuming. i need to learn how to dial it down and just enjoy simple meals with friends. and wine.

Yes, Awads. Just remind yourself how you feel when you are a guest in someone’s house. It feels so good to be cooked for and taken care of no matter what’s on the table.

Love this meal and a dinner party suggestions before the weather turns is Cioppino! Salad and crusty bread and you are all set!

This is inspiring! We have weekly family lunch at our organic farm in Ferguson, MO – staff rotate on chef duties and we feed everyone with fresh food from our fields supplemented by our favorite grains and proteins. When it’s my turn, I turn to my favorite cookbook: DINNER A LOVE STORY. You can come and visit us Jenny! We are EarthDance.

It is. As far as I know it is Tunisian/North African and through there also travelled (with Jewish migration) to Israel/Palestine. Lots of Israeli cuisine is a hodgepodge of things from all over the world as Jewish people from all over the place poured in. (Ottolenghi has a nice take on this I find).

I absolutely adore your blog posts! They’re so inspirational! I love what you do, and the things you post is exactly the kind of things I’m interested in. ❤️