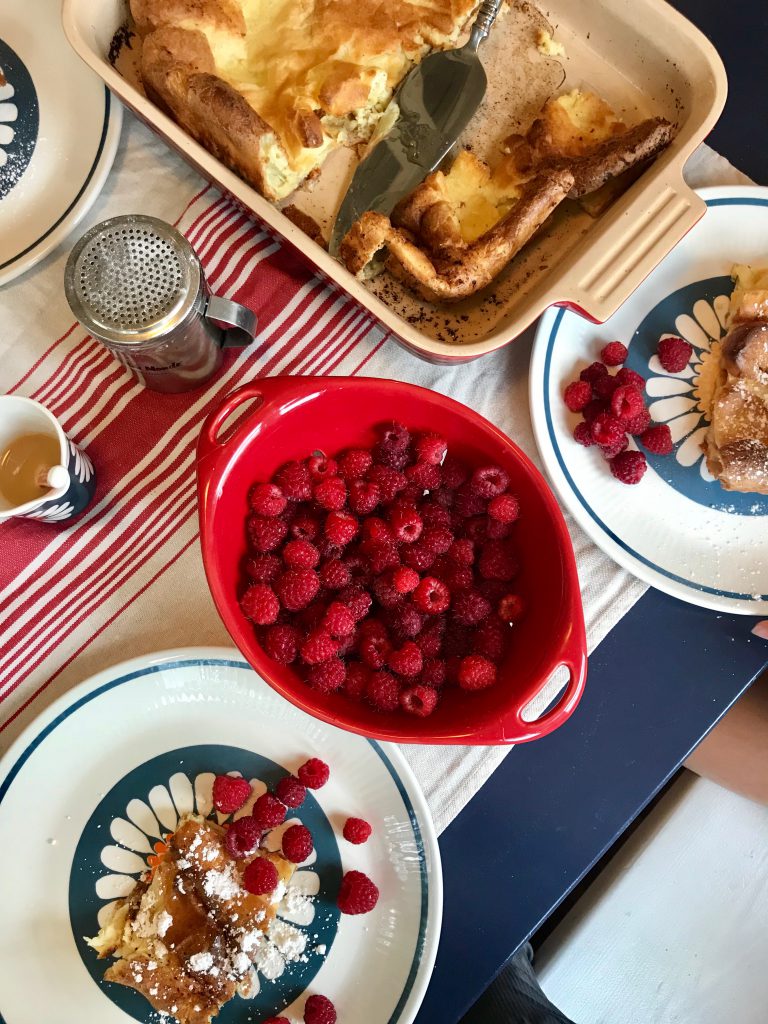 The short answer is: At my friend’s kitchen table. Abby and I were in Seattle for only three and a half days, so, as you can imagine, our Food Town Anxiety Syndrome* was at an all-time high, and we pretty much never stopped moving (or eating). Here is the official round-up where I share all the peripatetic details, but I’m writing today’s post as a reminder to my future traveling self, and to anyone else out there who cares, that the best meals on the road are not necessarily the ones that feel like boxes you need to check, or the ones that show up on an Eater heat map or a Bon Appetit city guide. It’s so easy for me to get obsessive about the bucket list — on Friday, we actually caught ourselves planning dinner in Fremont as we were shoving Capitol Hill tacos into our mouths for lunch — but I was better this time. We were staying with my college roommate Jenn and her family, and they were the best hosts because they made up two lovely beds for us, handed me the keys to their 2002 Volvo, and folded us right into their weekend routine. Every morning I woke up with the thought: I’m in Seattle, I need to track down the best cup of coffee. But every morning I wandered down to Jenn’s kitchen where her husband Ben had made a fresh pot, and it was as good as any cup I had all weekend, especially when enjoyed sitting in the cozy nook of their craftsman-style kitchen. And yes, there were stuffed doughnuts and frothy lattes and oysters so meaty and flavorful I thought I’d never recover from the bliss, but the truth is, my favorite meal was the Dutch Baby Jenn made us on Saturday morning. Whether guests are there or not, it’s her go-to weekend breakfast, she said, because she can’ t mess it up — unlike pancakes, which she finds more fussy and are strictly Ben’s domain. She topped each serving with raspberries (“Abby, come pick the berries for your breakfast!” I heard her yell from the backyard, every square inch of which is covered with lettuces, berry bushes, and fruit trees), a squeeze of fresh lemon juice, and a shower of powdered sugar. I’m never not making this for house guests again.

Refresher course: FTAS is a clinical diagnosis for the feeling that kicks in when you travel to a city known for its food scene, and makes you feel like no matter where you are and no matter what you are eating, you should be somewhere else eating something better. 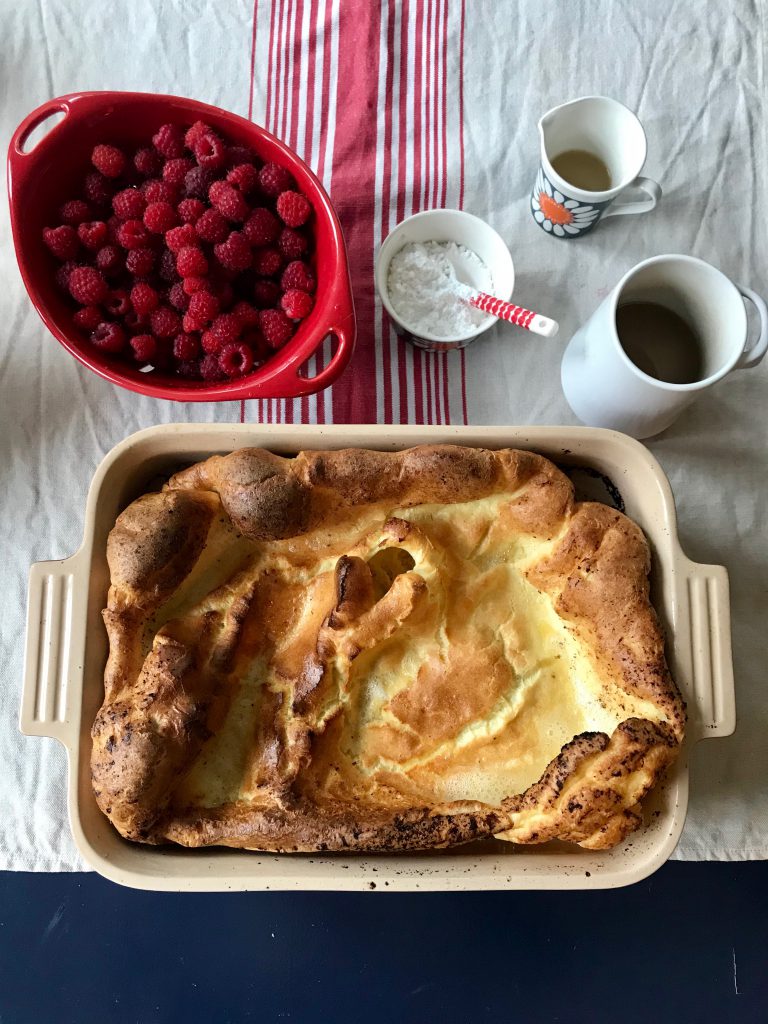 Those raspberries were picked right from her Ballard backyard. 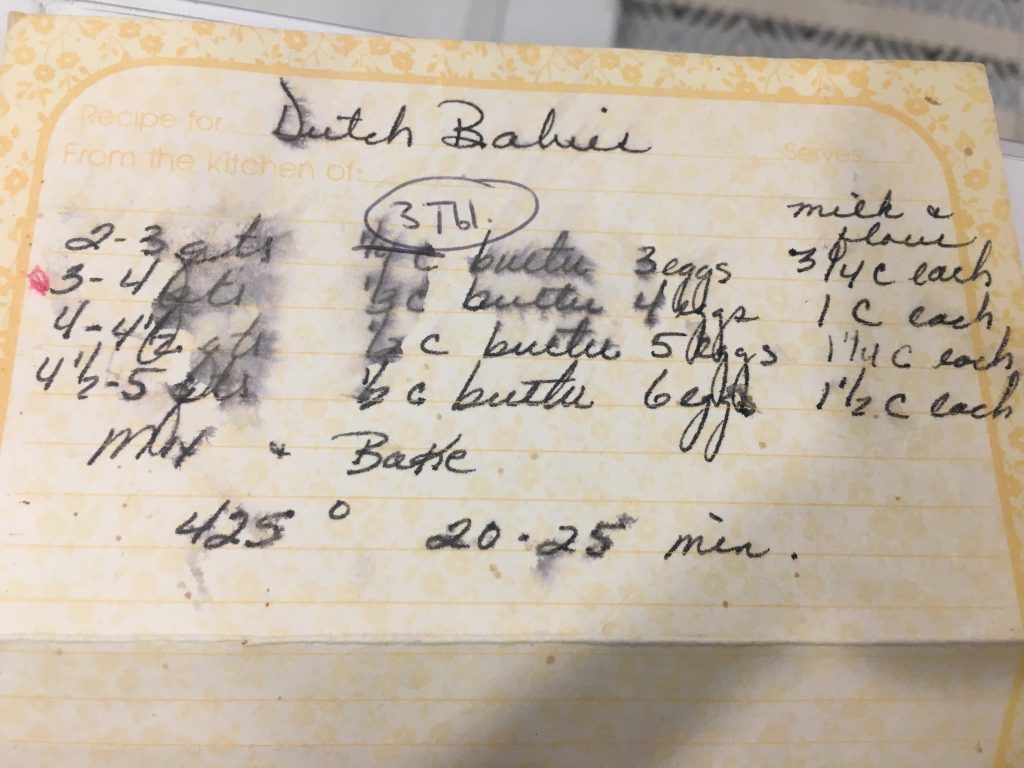 Jenn’s Go-to Dutch Baby
If a recipe’s reliability is in direct proportion to how stained and smeared its recipe card is, this one is never going to fail you. (It’s in her mom’s handwriting.) Jenn made the 3-4 quart one for the six of us.

Preheat the oven to 425°F. Add the butter to your pan (she used a large Le Creuset baking dish, but you can also use a cast iron skillet) and place in the oven while it preheats so the butter gets brown. Whisk eggs first, then whisk in milk and flour and pour into the hot buttery pan. Bake for 20-25 minutes. Serve with powdered sugar and fresh lemon juice. 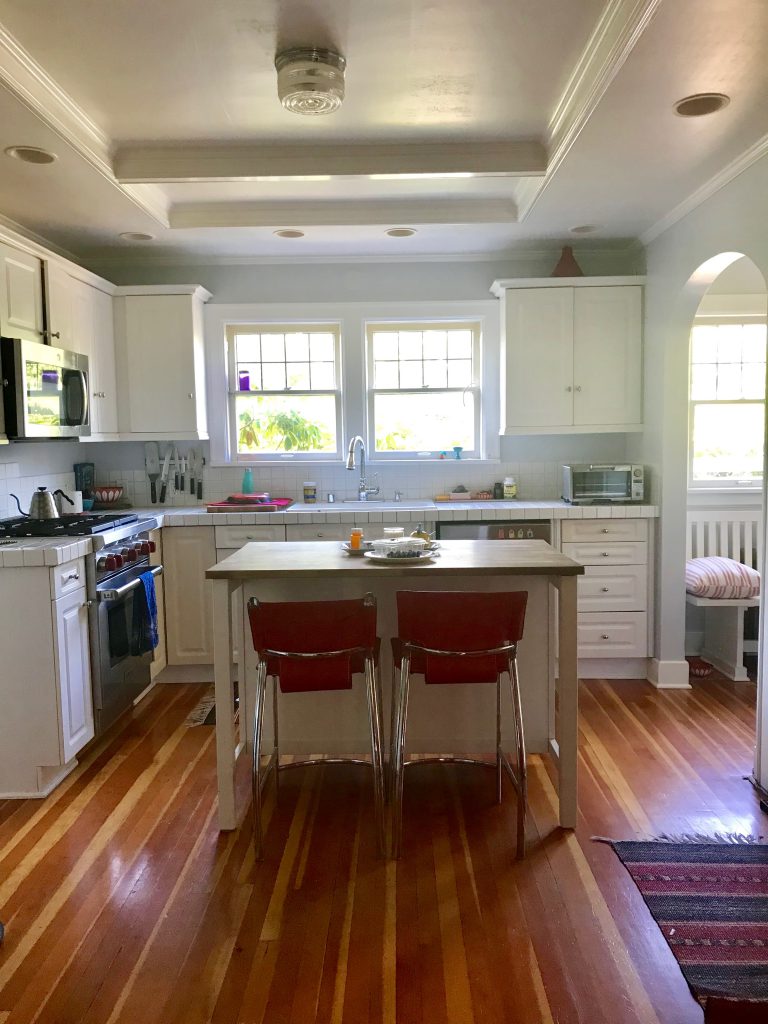 .
Jenn and I have a lot in common — we share the same first name, we both have two daughters around the same ages, and we’re both total suckers for red accents in the kitchen.

Where to Eat in Seattle, Part 2

A very good point. I felt the same way when staying with my best friend when she lived in Antigua, Guatemala. The meals at her table are the ones that I remember the most from that trip. Looking forward to hearing about the rest of your visit to our beautiful city. Also, completely get FTAS! I feel that way every time I travel and most recently when I visited Nashville.

This is pretty much what we call Yorkshire Pudding here in the UK but it is traditionally eaten with roast beef and lots of gravy. Another version is called Batter Pudding and is eaten as a dessert course – with syrup and/or cream. Interesting that this is a breakfast dish in Seattle. And presumably so in Holland…

This just made my day!

I’m with your friend and that they are way easier than pancakes and so good with fresh berries. I know what I’m doing this weekend.

Funny, we also just traveled to Washington State (Seattle only briefly), and my brother made a dutch baby, too! He made the whole thing in the blender, which seems like it simplifies things even further. Have others tried this technique?

I have made them both ways, though I prefer washing a bowl and whisk (or fork) over my blender. Also, I regularly put the batter in a regular non-stick cake pan and it works great.

Growing up in Seattle and visiting in my late 20s, I totally get FTAS… “Sorry mom, I really do love your cooking… but also I just really want to go to Monsoon and General Porpoise and Din Tai Fung…” but sometimes when it’s between that and freshly caught salmon, homemade salad, and berries for dessert, staying home brings a comfort that all the Eater lists just can’t compete with!

Hmmm… my son and I were in Seattle two weeks ago visiting a college friend and her family, and she made us a Dutch Baby as well. It was delicious, particularly with the view overlooking Lake Washington. We ate very well during our 60 hours in Seattle. I can’t wait to see where you are going next as we oftentimes seem to be in the same places around the same time.

Thank you, and thanks to your friend Jenn for this. The opposite of a page turner for me is “can’t mess it up.” And the already-done size conversions are so helpful since in summer, we are often making breakfast for a crowd. Perfect Saturday morning food!

Oh! Love this recipe! And Jenn’s kitchen. Going to Seattle for the first time next month, and am really hoping there’s a Part 2 with DALS Seattle restaurant recommendations!

Just awesome dish. I just loved reading this amazing recipe. I am definitely going to try this at home. Looking forward to read more recipes from your side.

I made this when you first posted it and it was so good! Really pretty too. I had never had one or made one before so that made it extra special. And I’m making another one right now! My step-daughter is home visiting from college and it’s gonna be our breakfast treat. Making fried apples to go on top!

We make these a lot but in the last year 2 out of 4 of us were diagnosed with Celiac. So many of our go-to’s had to evolve. I was so delighted that our “puffy pancakes” were just as good with GF flour. Yay! Please tell me where your plates are from! Love them.