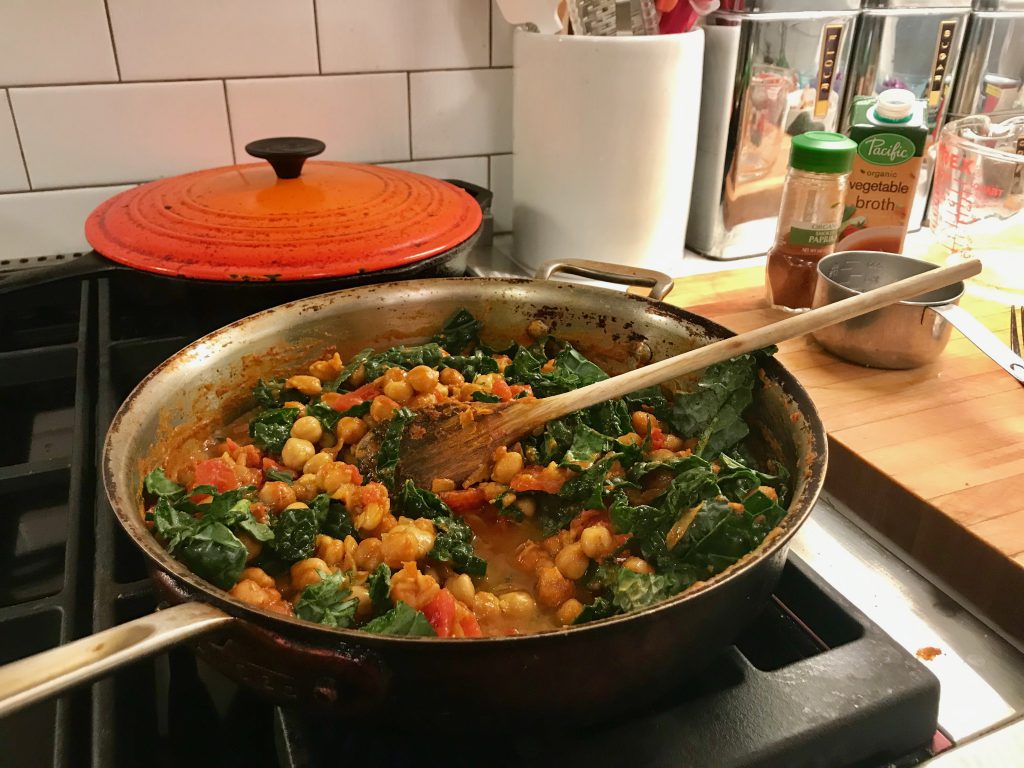 I could’ve probably come up with a slightly more enticing name for this recipe, especially since it was one of the better meals I’ve made in the last few weeks. But that would be seriously detracting from what makes it DALS-worthy. You know that stunning Margaret Wise Brown baby book The Important Book? Where she poetically itemizes the characteristics of common objects before landing on what is most important about that object? (“The important thing about a spoon is that you eat with it…It’s like a little shovel you hold in your hand…it isn’t flat it isn’t hollow, but the important thing about a spoon is that you eat with it.”) Well, if Margaret Wise Brown wrote about this dinner, she’d probably say something like: “This meal is delicious. It’s vegetarian. It’s healthy. It’s one-pot if you don’t make rice. It’s super flavorful. It’s a recipe you can make faster than it would take to pick up pizza. But the important thing about this meal is that it’s almost all from a can.”

Think about it this way. It’s the holidays, the Eating Season. Chances are you are spending twice as much time cooking and shopping and going to events where it would be rude not to eat a second slice of gingerbread cake. Wouldn’t it be nice if, say, on a random Wednesday night in December — a night off between office holiday parties and the kids’ winter concert and requisite latkes-and-menorah-lighting — you had everything you needed for a healthy dinner, a fleet of shelf-stable ingredients loyally waiting for you in the pantry and freezer and spice shelf?

That’s what this meal is. Next time you hit the store, pick up all the ingredients and you’ll see.

P.S. Update! My friend Robin made this last night in her Instant Pot, using a 1-pound bag of dried Rancho Gordo garbanzos instead of canned. She started it at 6:00, and sat down to dinner at 7:30 and said it was a hit with every last person, large and small.

Curried Chickpeas with Tomatoes and Greens
Serves 4
I know what you’re going to say. The kale is not from a can! You’re correct! I had half a bunch leftover in the fridge so threw them in, but this would be just as delicious if you used thawed-frozen spinach or peas. I have no defense on the ginger-onion-garlic, except to say that you should always have aromatics on hand.

In a large skillet (like the one shown) set over medium-low heat, add olive oil, onions, garlic, ginger, pepper flakes, salt and pepper and cook until slightly softened, about 4-5 minutes. Turn heat to medium, add curry powder, smoked paprika, and cook, allowing the spices to toast a bit. Add chickpeas, stirring to cover with curry powder. Cook about 5 minutes until they look like they are slightly crisping. Taste. If you think they need more seasoning, adjust accordingly.

Stir in tomatoes and half the broth, and let simmer on the stovetop for another 10 minutes or so until everything is warmed through. (If it looks too gloppy, add more vegetable broth to loosen.) Add kale and cook until wilted. Stir in coconut milk and miso mixture (if using). Serve with rice topped with cilantro and a squeeze of lime.

I am definitely picking up the ingredients for this because this would have been perfect for tonight’s dinner! I even have the kale still sitting in my fridge looking sad pathetic…

This is a perfect addition to our Meatless Mondays rotation, especially since my son has recently put the kibosh on tofu. blerg!

Oh Jenny – I love you and your recipes dearly (hello, dog-eared, splattery copy of DALS) but this yummy sounding dish is so not a quick weeknight recipe that’s mostly from a can. Anything with three fresh chopped produce items is out of the running in that category. I still look forward to trying it though!

Haha Janet. Guilty as charged. But don’t you just assume at this point that every single recipe starts with chopping onions, garlic, or an aromatic of some kind? So much so that they barely count and you don’t even notice them anymore? That’s my story and I’m sticking with it. 🙂

haha I appreciate that you acknowledge you’re stretching a little on calling this an easy weeknight meal from a can. But it IS fairly easy–just takes patience! I made it last night and it’s delicious. I also threw some coconut milk in with the rice because I had more leftover than fit in the container I had handy.

I’m dipping my toe into the instapot craze – could you post timing and other specifics on your friend Robin’s conversion? Thanks!

Congratulations on your Instapot. I am a relatively new Instapot user but a total convert, especially with heirloom beans!

I cooked the chickpeas on high for 40 minutes.

I saved a little bit of the cooking water to use instead of veggie broth in Jenny’s recipe.

I chopped, opened cans, sautéed and got everything ready while the chickpeas were cooking so it really was super fast.
-robin

looks amazing and will try. will DALS be posting a gift guide this year?

Of course! Working on it as we speak. Stay tuned….

Reminds me of a chickpea tomato stew I made once that was served over stale bread–SO. GOOD. Will definitely be trying this one, and possibly going the thick-cut-slice-of-stale-bread route as well.

This looks delicious and I can’t wait to try it! Quick question: any suggestions about what to do with the rest of the can of coconut milk? Thanks!

If you’re making rice with this, substitute the leftover milk for some of the cooking water. Yummy rice!

I threw some vanilla, maple syrup, cinnamon, nutmeg, and chia seeds into it and stuck it in the fridge. Chia pudding for breakfast!

I have some collards. I may use those!

Just made this for Meatless Monday. We all really liked it, but it seemed like a lot of curry. Will go with a lighter touch next time! (Note to Dianne: I poured the leftover coconut milk into a freezer bag to save for the next time I make this!)

awards: Thank you! I don’t know what I didn’t think of that. I’ve never frozen coconut milk before, but I will definitely give this a try. Thank you!

I made this last night and could only find very iced over creamed spinach in the freezer. I chucked it in anyway and it made things a bit soupy and threw off the acidity a bit so I added another can of fire roasted tomatoes and served it over rice to soak things up. I used 1/2 garam masala and 1/2 madras curry. It was delicious and when I had it at room temperature today for lunch and I might have liked it even more.

This was so good and even better the next day. Thank you!

So I’ve made this twice and my husband and I absolutely love it. This weekend I gave some to my college age son and I’ve just had the best comment back from him and I thought you’d like to read it too! “This is exceptional mate! Good finals studying food” It made my day, thanks for such a wonderful recipe.

I made this on the kind of night you suggested. We got home at 7:15 from shopping and dinner was on the table by 7:45 and my husband said repeatedly how good this recipe was. This will definitely be added to our weekly rotation. Thanks!

Omg this was so good. Adults & kids all lapped it up happily.

I am totally obsessed with this recipe! I loved it so very much and I will be making it often. I made it the other night and I wish I had doubled it to have leftovers! It was fantastic!! I am now a little obsessed with chickpeas in general. But, I came back here to tell you Thank you because I loved it so much!