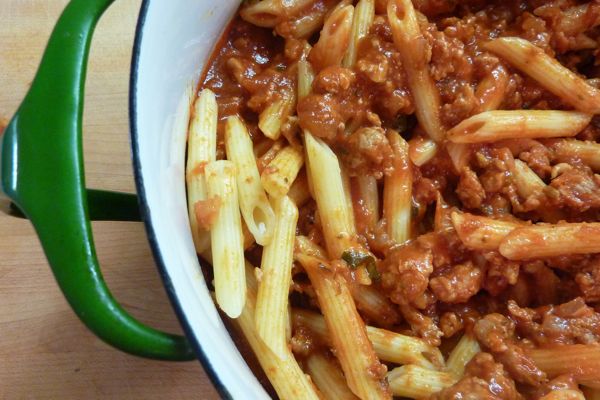 .
Meet Turkey Bolognese. This recipe has been in the rotation in our house for almost two decades. It was the sauce we cooked together in Andy’s first apartment (in 1994, in Brooklyn, when the only restaurant on Smith Street was The Red Rose) and the same one he made when we first came home from the hospital with a new baby — which we then stored in freezer bags alongside bags of expressed breastmilk. It is not only forgiving with measurements, but with schedules, too. It’s workable on a weeknight if you have a 40-45 minute window (about half that is hands-on time) or, if you wake up on a Sunday feeling particularly SuperMommish, you can cook up a batch to freeze and cash in on later in the week.

In a medium saucepan, over medium-low heat, heat a few glugs of olive oil. Add 1 small onion (chopped), 1 clove garlic (minced), a few shakes of red pepper flakes, salt and pepper (to taste). Cook about 2 minutes. Push everything to one side of the pot, turn up heat slightly, and add 3/4 pound ground turkey (or ground beef), breaking it up with a fork as it browns. Once most of the pink is gone, stir together with onion mixture. Add 1 heaping tablespoon tomato paste, 1/4 cup water, a few shakes of fennel seed and stir everything together. (A wooden spoon is effective here.) If you have wine (optional), stir in about 1/4 cup, and raise heat until it has reduced. Add 1 28-ounce can tomato puree, 8-ish shakes of dried oregano, and stir. Bring to a boil, then turn heat to low and simmer for 15 minutes up to an hour. (If you are freezing for later, let it cool at this point, then add to a freezer bag flattening like a book so it’s easy to thaw under running water later.) While the sauce is simmering (or reheating) prepare 1 pound penne (or any pasta) according to package directions. Toss in with sauce and serve in bowls with freshly grated Parmesan.

I never comment on blogs and such, but I had to laugh because I have been making my own version of this for years. I refer to it as “lazy bolognesey” and I sometimes add diced-up carrots to the onions and garlic as well as using the canned tomatoes with basil (because my market seems to have those in abundance). I love the idea of adding fennel seed. Thanks for your blog. It’s great fun and a great message.

I’m so mad I didn’t think of “Lazy Bolognesey” first! Love that.

Oh! The Red Rose on Smith Street. I can remember that restaurant so clearly. I left my hometown Brooklyn and moved to Chicago in 1995, so to me 1994 Smith Street is eternal. Thanks for the memory. And Im looking forward to trying this recipe out on my boys. It looks great. Pasta always makes everyone happy, even if I have to hold the sauce for someone.

So much easier than my bolognese (which is probably why it isn’t in my weeknight rotation) This is perfect!

Bolognese is always a good one to have on hand! Thanks for the recipe:)

I saw your recipe this morning and made it for dinner tonight. My husband and oldest son gave it rave reviews and have already claimed the leftovers for their lunches tomorrow; even my pickiest-person-on-earth 5-year-old took a couple of bites. Super easy, super inexpensive, and great tasting — thank you!!!

I spy a Dansk saucepan.

Katherine – Nice eye! Ebay special. You can pretty much always find one for under 15 bucks and this one lives on my stovetop.

Just wanted to say that I read about you and this blog in Whole Living magazine and had to come see. http://www.wholeliving.com/photogallery/home-with-jenny-rosenstrach

Definitely adding to my blogroll. Family dinner is something I’ve strived for for several years and just haven’t been able to do once we stopped going out to eat dinner several times a week. But when school started this year, we set Monday and Thursday as eat dinner at the table as a family nights… and any other night that happens to happen is bonus! My older son started high school this year and I know our opportunities for family dinners for all four of us will end before too long.

Have to give a shout out to Mad Hungry with Lucinda show, too, because it’s family dinner elements, too… thanks to Whole Living magazine for turning me onto this blog and that show for the inspiration and shoring up our commitment to family dinner.

I love this Jenny. We make something similar and when we want to fancy it up we toss it all with some ricotta and bake it with mozzarella making it into a “lazy lasagna”.

Thank you for sharing this recipe. I’ve searched far and wide for a great bolognese sauce, and this is the one!

I’m a devoted follower of your blog and your philosophy on food. I look forward to working my way through all your recipes.

Made this last night and it was delicious!!!! Loved it.

love your style and your drive

Mmmmm. I made this on Saturday night for some friends who came over for game night. Excellent and so easy. I doubled it as well so now I have a little money in my bank too!

I love this “lazy bolognese”. I added grated carrots for a little extra sweetness ( ok, for vitamins too). Thanks, love the blog & book.
Elena, Washington Heights

Read in the cookbook (that I read cover to cover in a week) and made tonight for me (single) and family expecting second child (any day). It was great. So was the wine. Never comment on recipes, but I’m a huge new fan.

oh, my….i made this following the recipe in the book on monday (so quick!) about 2 weeks after i’d made marcella hazan’s real bolognese (an all-day event!) and this was amazing, for the time and effort involved. i’m not sure i can go back to marcella. i cannot wait for the leftovers this week!!! my little family has a new favorite!

Made this for the first time last night and it was so delicious. Will definitely become a regular feature at our house!

Thank you for this! I’m generally not a big fan of ground turkey and I was tempted to make it more traditional by adding celery and carrots, but I made myself stick to the recipe as written. (Though I did use the whole pound ground turkey I had. What do you do with 1/4 lb. of turkey?) All this to say: it was delicious! The flavors were well balanced and the turkey was so tender. Again, thank you.