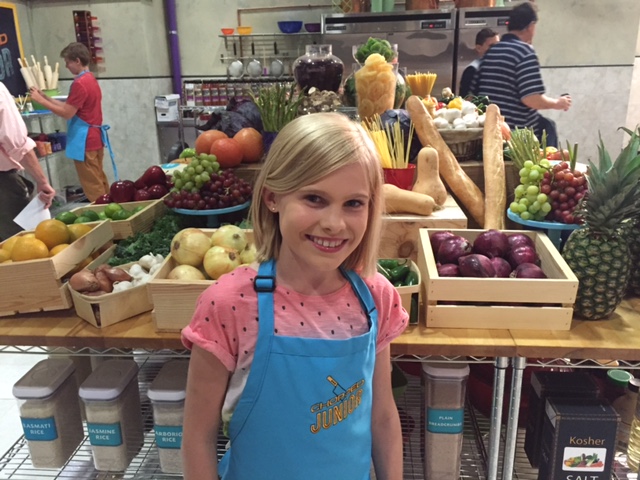 Those of you who are Chopped Junior fans (or have kids who are Chopped Junior fans) might recognize this young lady from last month’s battle, where she minced and sautéed her way to victory over three other (adorable) aspiring tween chefs. Me? I just know her as 12-year-old Elizabeth, the kid who lives around the corner, my daughter’s oldest friend, her partner-in-crime on playdates and in orchestra pits. (Now that I know how expertly she can pan-fry scallops…well…I’m thinking those playdates need to happen closer to dinner hour.) I figured we should snag Elizabeth for an interview before she lines up an entourage of publicists, so Abby sat her down in their middle school cafeteria last month to ask her a few questions about her experience. Take it away girls!

Abby: What was the audition process like? Did they ask you to cook something?
Elizabeth: I didn’t have to go into a studio to audition. I only had to fill out an application, and send in pictures of food I cooked — I sent in shrimp with forbidden rice and mango salsa, some sushi, plus a “crazy” hamburger that I make for my dad. I piled on lots of different toppings like a tower. I also send in a video of myself cooking. Then the next they called me in for an interview.

A: Were there cameras following you around all the time? What was that like?
E: Yes, every single second besides a few minutes in a room off to the side. It was a new feeling but it wasn’t anything intimidating like I thought it would be. Once you start cooking you don’t really notice that much cause you’re really zoned in on what you’re making and not messing up. So I kind of tuned them out. 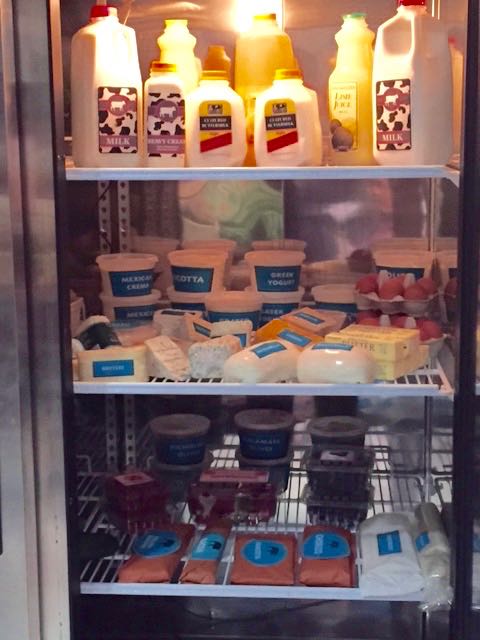 A: What was the pantry like? What was the craziest thing in there?
E: I don’t think there was anything too strange in the pantry but it was very well organized and it was never very hard to find anything I needed.

A: Did you come up with recipe ideas all on your own or did they help you? How much time did you have to think of something?
E: On Chopped we did not have recipes beforehand; we had to think of what we wanted to do with the ingredients as soon as we saw them and it was our first time seeing them when we opened the basket. We had about two minutes to think of something and then we had to start cooking.

A: That sounds scary! How did you prepare for it? Did you have certain go-to recipes in mind before you even knew what the ingredients would be?
E: Well I had a chef-friend come to my house to teach me more about different sauces and just to prepare me for anything that might come my way. He would give me, like, four different ingredients and I’d have to think on my feet of a dish, like the show. He gave me some weird stuff like lychees and dried squid with simple things like bananas and also a bunch of meats and fish. Just to give me an idea of what could happen. 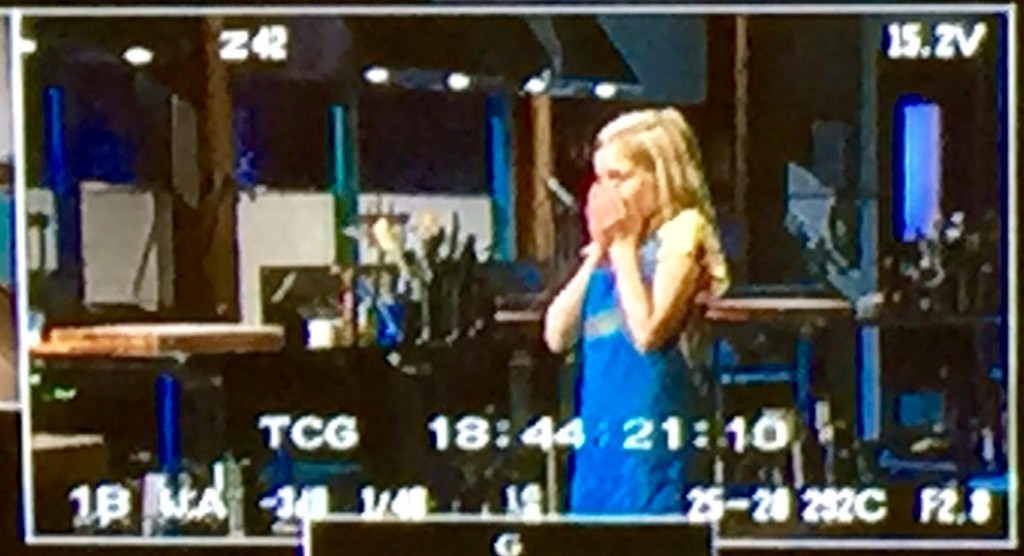 A: You weren’t allowed to tell anyone that you won or even that you were on the show! Was it hard to keep it a secret?
E: Um, it was not very hard because I knew that if I let it out, I’d have major major consequences that I would not want coming my way.

A: Whoa! WHAT CONSEQUENCES??
E: They could have pulled me off the show or fined me.

A: How were the interviews in between?
E: We didn’t have lines, they’d ask us questions and we’d have to repeat their answers echoing the question because their voice was going to be edited out.

A: If you didn’t like your answers for the interviews could you change them? Did they tell you what to say ever?
E: We could always ask to change answers, but there was never a guarantee that they wouldn’t change the first response. And no, they never fed us any lines.

A: Were you surprised by the editing job?
E: I had some sort of idea what was going to happen, but not much. And I loved how they did the editing. I thought they did a great job. When it first aired in December, that was my first time seeing it as well. 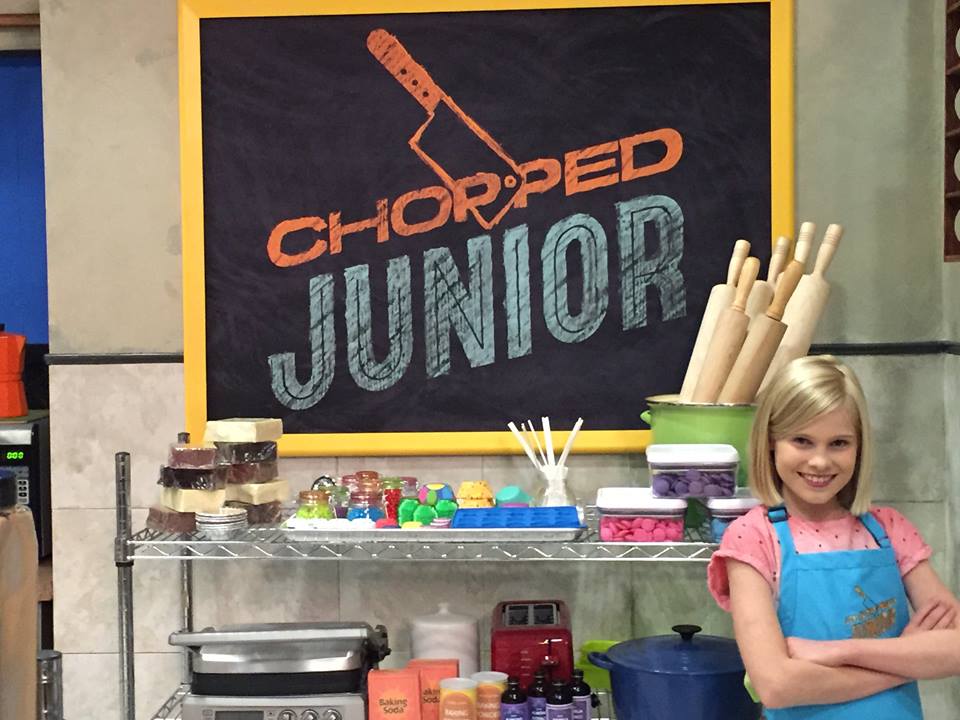 Jenny: Yes, thank you Elizabeth! Come over and cook for us anytime! xoxoxo

Related: How young is too young? Last year’s interview with the mother of a cooking show competitor (who looks remarkably like Elizabeth, actually!)

Wow! I love how she appreciated how well organized the show pantry was — definitely a sign of a true cook! Dinners at their house must be a true family affair. How fun.

What a cool look behind the scenes! You asked all of the questions that I had, so thanks for reading my mind. I have a secret dream of competing on Chopped or the Mystery Box Challenge on Master Chef. Sometimes when I go into my kitchen I just open the pantry and pretend that I only have one hour to create a “beautiful, elevated dish for the judges!” 😀
Thanks for the sneak peek and congratulations to Elizabeth!

What a great interview!

What a great post. I love Chopped and Chopped Junior. My 12 year old son makes fun of me for watching. I just wish that he would get inspired and get in the kitchen, some day.

Such a great interview!! Love this post!!
Xoxo,
Love from http://www.trangscorner.com {a lifestyle, fashion, beauty, and food blog}

My 7 yr old daughter and I watched Elizabeth and all the Jr Chopped chefs. Great job, Elizabeth! We love seeing young chefs in the kitchen. My daughter is very inspired.

Got to know well the chopped junior champion in this interview. I’m a fan of the show and it’s great to see kids like her who can really prepare delicious dish right away. And definitely this girl got all the qualities of a real chef that’s why she won. Congratulations Elizabeth! You are an inspiration to a lot of kids out there!

What a great interview! Neither I nor my 7yo daughter have seen this show but think we would both love it-need to scout it out.