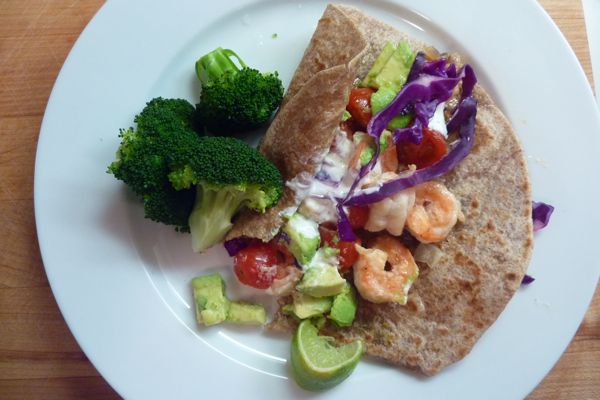 With all the rather large variables conspiring against family dinner (long hours, long commutes, overscheduled kids) sometimes the best thing you can do to feel in control of the situation is eliminate a bunch of the smaller variables. You know how I feel about getting the milk poured before you start to cook, and about dreaming up strategies to distract the kids while you go about your mincing. But, in my humble opinion, the biggest of the little variables is choosing meals that you are comfortable making, meals that don’t require a recipe or so much focus that you can’t simultaneously chop the tomatoes and carry on a conversation about the cafeteria seating politics of third grade. Not only is it more likely you will cook a fresh, homemade meal, but — if you are working outside the home — you won’t feel like you’re spending yet another half hour apart from the kids after being away from them all day. Only you know the recipes that are filed in the chop-and-chat category in your house, but in mine, it’s this shrimp taco recipe. You should of course feel free to steal it, practice it, and make it your own. 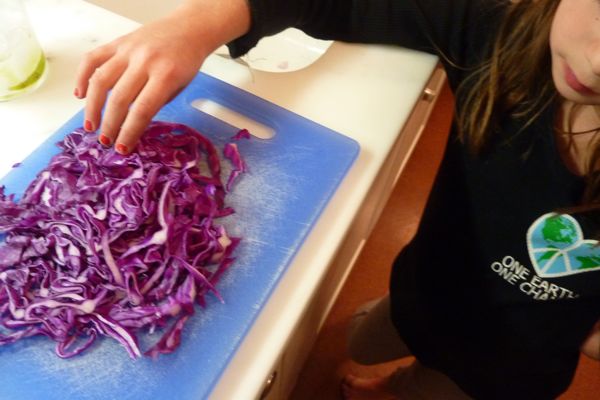 Could anything make me less angry than my little companion stealing cabbage while I prep the fixins?

Easy Shrimp Tacos
Commit this to memory and then throw away the recipe!

Squeeze some fresh lime juice over 1 1/4 to 1 1/2 pounds of shelled raw shrimp. In a large skillet, heat a few glugs of olive or vegetable oil over medium heat and add 1 halved garlic clove. Cook until garlic is golden but not burned, then remove from oil. Add a handful of chopped onion (red, yellow, whatever), a dash of red pepper flakes to taste, salt, and pepper. Add shrimp then cook about 2 minutes a side until the shrimp has been cooked through. Remove to a bowl and cover with foil to keep warn. Wipe down skillet with a paper towel and heat as many whole wheat tortillas (over high heat, about 30 seconds a side) as you need to feed the family. (Six works for our family of four.)

Serve with small bowls of chopped avocado, sliced red cabbage, sliced cherry tomatoes that have been tossed with a spoonful of salsa, and sour cream that has been mixed with a squeeze of lime, a pinch of sugar, and cilantro.

Have the kids assemble their own tacos at the table.

This is why I love you so!

this sounds so good.

and I love having dishes that I can just make without thinking. some days I don’t want to talk to anyone though! 😉

In our house we yell “Winner, Winner, Chicken Dinner” when someone wins a board game. But my son will probably say something like “Winner! Winner! We’re having shrimp for dinner!” when I make this. Why hadn’t I thought of using shrimp instead of salmon for my tacos? This is why I love this site!

making this tonight – thanks for the inspiration. Did I win the getmainelobster.com feast?

I’ve had this recipe bookmarked for a while, seeing it in your newsletter reminded me I need to actually make it soon, my stomach thanks you for the reminder!

I made these last night and they were a big hit. We used your recipe as a general guide and then tailored to suit or family and what we had in the fridge. Thanks so much, once again, for the inspiration.

I made these tonight and my husband declared them the best shrimp tacos he has ever eaten. Once again proving that simpler meals are the best!!! Thanks!