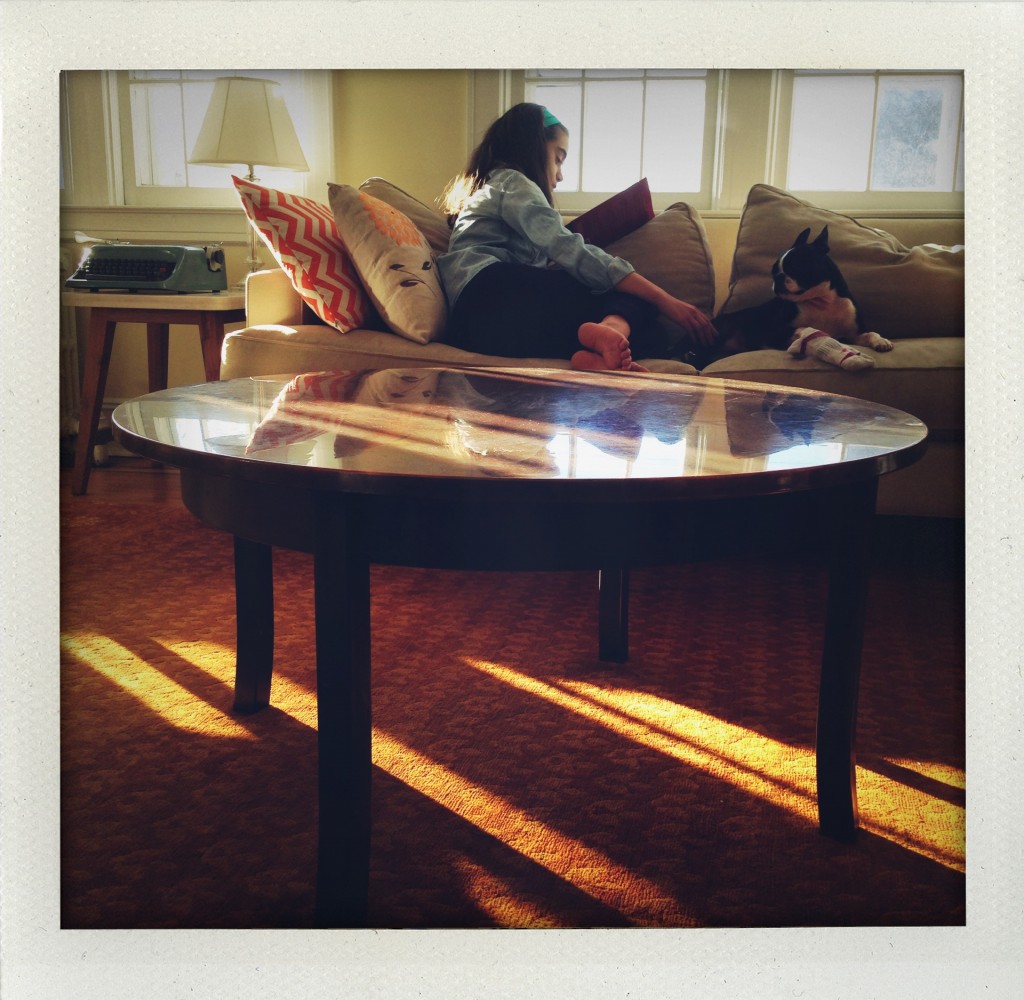 See the coffee table in this picture? We’ve had it for fifteen years. We bought it before we had kids, when we were rushing to furnish our first real apartment and we went to some big Crate and Barrel sale and bought a bunch of stuff that looked like the kind of thing that grown-ups would have in their first real apartment. And though it has served us well, not a month goes by when one of us doesn’t walk by it and say, “Oh god, that coffee table. I can’t believe we haven’t replaced that thing yet. What is our problem?” What is our problem? Our problem is that we’re busy, we have two soccer tournaments on Saturday, the kids’ homework has become so intense, the lease on our car is about to run out and we need to take care of that this weekend before the bank comes after us, it was a brutal week at work and I just need some time to sit on the couch and chase down an entire bag of cheez doodles with my martini, we don’t feel like spending a bunch of money on something that we don’t actually need right now, and anyway, the dog-puke-stained family room couch — the one Abby drew on with a black Sharpie — is a much higher priority.

Only, it isn’t. Our problem is that, when I look at that old coffee table, all I can see is Phoebe, 10 months old and rubber-legged, clinging onto the edge of it, trying to work up the courage to take her first steps. First she’d scoot across the floor, until she was practically underneath the table. Then she’d kind of shimmy up one of the legs, off her butt onto her knees now, reaching, reaching — and after many failed attempts, finally pull herself vertical, holding on to the table’s edge with both hands, well-fed thighs quivering beneath her, straining with the kind of concentration I couldn’t muster today if my life depended on it. It was like one of those epic sequences from a National Geographic special, when the defenseless little caterpillar crawls 700 miles across the rainforest floor, without the benefit of legs, past all manner of poison frogs and horned predators, until it reaches the trunk of the tree where the previous 19 generations of its little caterpillar family were born, and climbs 200 feet straight up into the canopy: home.

If you look closely, you can still see — around the outermost edge of the table — a slightly lighter patina to the copper, where those greasy little hands held on for dear life. I remember Jenny and I sitting there on the rug, watching evolution do its magical, inexorable thing, as Phoebe grew stronger, first able to stand there for longer stretches, then deciding to let go of the table with one hand, then free-styling a little bit — doing a deep knee bend and then coming back up again, slapping the table with both hands — gaining in confidence. And we, the World’s First Parents, just sat back and thought, Oh yeah, look at her. That’s our kid. Watch: she’s going to walk at 10 months. She’s such an athlete. So determined. Definitely gifted. But that was pride talking, and it only took us so far: this table surfing went on for a couple of months, with Phoebe just… not… quite… able to detach herself completely and officially become a walker.

Everything happens in due course, it’s true, and Phoebe was going to walk when she was good and ready, but a part of me believes that she might still be attached to that table if it weren’t for rice pudding. Back then, our go-to dessert was Kozy Shack rice pudding, and we were never without a quart of it in the house. Phoebe was a freak for the stuff. Cold, creamy, dusted with a  little cinnamon, she could eat it by the vat. She would literally start drooling all over her onesie the second I took it out of the refrigerator. And at some point, Jenny and I started using it to incentivize the walking: we would sit on the floor about six feet away from Phoebe, as she clung to the edge of that coffee table, and we would hold out a spoonful of the rice pudding. (Turns out, the human is a pretty simple machine.) Suddenly, Phoebe was a little more sure of herself. She’d let go of that table and stagger across the rug to us, pausing now and then to right herself, until she finally reached the tip of that spoon: home. — Andy 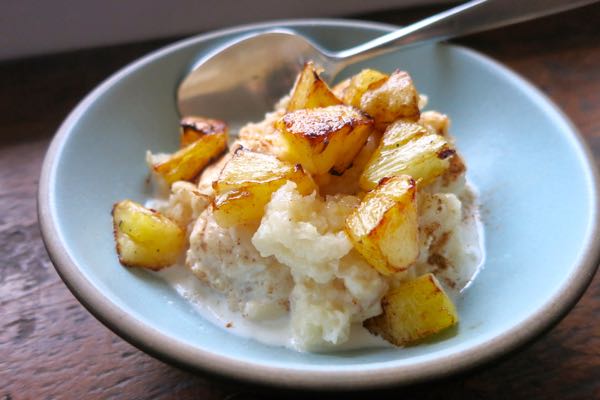 Coconut Rice Pudding with Warm Pineapple
Now that Phoebe is about to turn 13, we figured it was time for us to graduate from Kozy Shack and step things up a little bit. If you don’t want to do the coconut milk, replace with the same amount of whole milk. Also, Jenny wants me to note that this might be a nice dessert to make for dinner guests since so much of it can be done in advance. All you have to do is fry the pineapple at the very end, which takes about 3 to 5 minutes.

Preheat oven to 350°F. Mix the milk, coconut milk, rice, sugar and salt in a medium-large buttered casserole or baking dish. Bake uncovered two hours, stirring the mixture every half hour. Add the vanilla, nutmeg, cinnamon and lemon zest and mix. Bake the pudding without stirring a half hour longer or until the rice is very tender.

Serve rice pudding in bowls topped with pineapple and a drizzle of cream if desired.

Dang! You got both my English-teacher and parental heartstrings with this one. What beautiful writing! And as an almost-empter nester and grandma (!) of one perfect two-year-old, I was swept back by your memories of those sweet times.

This was lovely and brought me back to when our oldest was learning to walk. (We bribed her with chocolate pudding and — thank goodness — have it on video.) (We also have had the same coffee table for 15 years.) Thanks for the dose of nostalgia.

This is so sweet. You guys have a lovely way of talking about your family. I’m currently reading my way through Dinner: The Playbook and I am loving it!

Oh to hold on to those moments a little longer. Mine are all grown now and out of the house and I miss the little times of watching them grow. But I love the adult stage too. Every moment is worth treasuring.

Love this – the ‘well fed thighs.’ That sums up my boys so well – both of which are good/determined at sports but didn’t walk until almost 18 months! Maybe we needed the pudding 🙂

i have the side table version of that coffee table, bought as a C&B floor sample because it was the only way I could afford it so long ago. I have little ones now, so my toddler fingerprints are still very fresh!

This looks delicious! How many does that recipe above serve? I’m wondering if it’d be practical in larger batches, since it’s just a 1/2c of rice?

Your writing is one reason DALS is one of my favorite blogs, thanks for the pleasure. The second reason- your recipes. I have made pudding in a crock pot and on the stove top, but never in the oven, very curious to try. A quick question: is 1/4 cup rice to 4 cups milk accurate? Is it because milk is expected to evaporate more in the oven vs. on the stove top?

Hi Mila — I know, it does seem like a tiny bit of rice, but it’s accurate. (This is actually adapted from an old NYT Cookbook recipe, and I always think the same thing when I see it. It has never let me down.) Honestly, you could up the rice if you wanted it a littler rice-ier — it’s hard to go wrong. And Yvonne — this serves 4-6, I’d say.

The stovetop version of this has totally been my go-to company dessert for the past year, but with the addition of Mango to the pineapple, (and passionfruit when it’s available). So good!

And leftovers can totally be justified for breakfast – I mean, it’s whole-grain & dairy, right?!

We have the same coffee table! We got it also at Crate and Barrel about 15 years ago, in California,my son is 4 and there are stains in the copper where he left things many years ago, we are holding on to it too. Thank you for the memories

We have the same coffee table! We got it also at Crate and Barrel about 15 years ago, in California,my son was 4 at the time and there are stains in the copper where he left things many years ago, we are holding on to it too. Thank you for the memories

Thank you. You can write and also read minds from across the pond.

We have a new custom coffee table arriving this week. It’s bittersweet.

I’ve only ever made rice pudding once before…
Is it really 4 cups liquid to just 1/4 cup rice??

Andy, what awesome writing! Makes me think you might consider writing a whole series of your parenting memories, from pregnancy to current times. It would be a wonderful gift to your daughters,as well as a resource for all parents, beginning ones as well as advanced learner’s, dealing with the teen-age years. Maybe a blog focused on this? Could develop into a real community thing–

I should have known better, an Andy post usually brings me to tears. Mine is only 18 months and yet I find myself being nostalgic for things that haven’t even happened yet. I told my husband the other day, as our son picked squished blueberries off the floor, “one day he is going to be old enough to awkwardly hit on someone at a bar.” And I almost lost it. I imagine we will have many pieces like this in 15 years. For all the reasons you mentioned.

Loved this. My baby daughter is just about ready to let go of our coffee table, inherited from an old roomate’s grandparents, with an awesome wood-inlaid diamond pattern on top. I said that once she learns to walk, we will move it to the basement to open up the living room space, but it’s going to be a hard move!

That looks like the perfect coffee table! We too have an ottoman that serves as a coffee table and has been puked on, diaper changed on, drawn on, and used as a learning to cruise tool. I just keep having it reupholstered as they grow.

I know what I’m making today on our snow day! I love rice pudding and haven’t had any in ages…