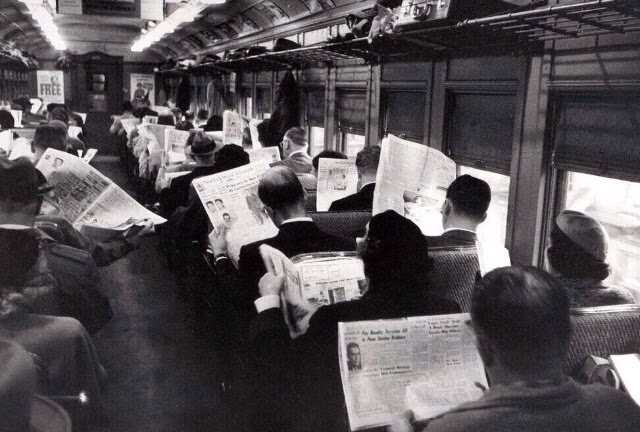 Though my morning commutes have changed over the years — from the F train to Metro-North to my walk upstairs to the home office — the morning routine has pretty much stayed the same. Every weekday starts with a cup of strong storebought coffee (medium, milk, half-sugar) and the newspaper. The paper newspaper. I have an online subscription to the New York Times, and get news from a hundred different sources via Facebook and twitter, or from NPR depending on my driving duties, but for the most part, the day starts with page A1. For those of you kids out there who think I’m referring to steak sauce, please see me after class.

Kids today! At my last job, I remember explaining to a 20-something assistant where you find the Op-Ed page of the New York Times.

“It’s in the same place every day?” She asked.

“Every single day,” I said, my heart dying a little.

I realize how old I sound, and yet, I worry about the overwhelming news landscape for my own kids. I don’t worry about them getting enough news — Lord knows there are enough sources out there — it’s more that I’d like to figure out a way for them to engage with the world in a regular, meaningful way, to understand their place in it as much as possible. They’re 11 and just about 13 — old enough to know that life is not all soccer victories and selfies, that not everything can be reduced to a hashtag on instagram.

Dinner can play a role in this, naturally. Though we’re certainly not the Kennedy family — whose kitchen table was known more as a forum for debating current events than it was for debuting a braised chicken dish — we usually end up using the only eyeball-to-eyeball block of time we have all day to talk about what’s going on in the world beyond the kitchen table. Last week, though, something funny happened. Phoebe, who is known in our house as “the dreamer,” triumphantly brought up something she had just read in the news — a story about how “spacing out” was a necessary part of the creative process.

“Hey I read that,” I said. “Or I think I heard it on NPR.” (I had, it was part of the Bored and Brilliant challenge they’re running on New Tech City.) “Where did you read that?”

I forgot that I had signed Phoebe up for Facebook. Her track coach uses it to disseminate all the scheduling information, and I told her she could follow a few other feeds — the Times, NPR, her twin crushes Jimmy Fallon and Allie Brosh — but not friends just yet. (She has instagram for that.) Turns out, Facebook is a pretty amazing news source when you don’t have to sift through pictures of your friends’ cat vomit. Phoebe told me she always checks it in the morning for track updates and ends up reading something else from the feed.

And it turns out that Abby has started establishing her own little routine. She watches CNN Student News every day — sometimes in school, sometimes at home. It’s a ten-minute update, hosted by a guy named Carl Azuz, who strikes just the right balance between Brian Williams and your favorite uncle, unafraid to confront topics like Boko Haram and Immigration, but smart enough about his audience to include a bit about the dog that takes a bus to the park everyday by himself. This morning, we watched a segment recapping last night’s State of the Union, and Abby said “See? Isn’t that great?”

Yes! How do you like that? If I didn’t know any better, I’d say they’re on the way to starting their own news routines. I really hope it sticks.

My 10 year-old likes Here There Everywhere, a news site for kids. It has news, current events and cool stories. I like it too.

Kim – yes, HTE is great!!! And I find it’s especially great for elementary-school age kids. Here’s the link for anyone interested: http://htekidsnews.com

I love this! My son is under 2 so he won’t be ready for the news for a while and who knows what media will be like when he is, but I appreciate the ideas for use in the future.

And here is something I wrote about Here There Everywhere a few years ago when Osama Bin Laden was killed. http://www.dinneralovestory.com/tonights-dinner-table-topic-osama-bin-laden/

I’m glad I’m not the only one who still reads the paper version of the paper. My younger brother (early 30s) recently informed me that My husband and I are the only people under 55 who still get the paper delivered!

I find it challenging when the new is so upsetting (e.g., the physician who was just murdered at the B&W in Boston). My almost 9 year old overheard, and we had a discussion about gun control, etc. but I struggle with how to frame it for her.

Yay for the paper newspaper! We only get it on the weekend, but I feel like the culture of it is so important: the ritual and community and kibitzing, rather than everyone sneaking away to read everything online alone. And thank you for the CNN Student News advice. Fab.

I like this video for kids about when they see news they find frightening or upsetting. I used to teach debating and public speaking for 8-12s (in Australia, where I live) and we wanted them to consume news but we needed to provide parents with some resources for when it was stressful for them: http://www.abc.net.au/btn/story/s4058032.htm

We get two newspapers a day & love it. What I am worried about is websites that provide news online. CNN is an example, but there are many others. The problem I have is that more & more often they provide only a video about a story. It used to be there was a video with the written story or (gasp) just a written story. Now there is often only a video. The dog taking the bus story was an example where the video was welcome. Many times however, I would rather be able to skim the story to see if I want to read it. There is no skimming a video. I worry that one day there will be no written stories.

I show my 9th grade students CNN Student News every day! I love it!

Try newsela.com. It’s an amazing site for all sorts of current events and news. You can even switch the reading levels of the articles for those kids that need a little extra support or are ready for more complex vocabulary. I work with many middle school teachers that love this website and think it would be an awesome addition for your girls. BTW—made your pork ragu over the weekend. fabulosity!!!!!

yes!! we are a family of dead-tree REAL newspaper lovers. I’ve had the Washington Post delivered for almost 25 years (gasp! i’m old). Our 7 year old reads the kids pages, and loves the comics. we are hoping to hook him on news the same way we were hooked as kids, but realize the medium for him will be different. And we are totally ripping off the kennedys as I always bring up some current event at the supper table. cheers!

As a college student who is conscious of current issues, I couldn’t agree with the blog posts more. I think it is so crucial for my generation to keep up with current issues, not only for the sake of our future, but also, for the sake of the generation that follows us. By staying informed and being aware with the news, whether it be online or with a paper newspaper, people, young and old, are less likely to become bystanders to the turmoil of the world. We need to stay informed!

So great! I learn from my kids all the time, in addition to sharing with them, and now that they are (mostly) grown, I find that they have pretty good judgment about media and news, etc. Must have been all those family dinners!

Very cool! I’ve never heard of Here, There, and Everywhere, I’ll check it out for my 6-year-old, I’m sure she’d love it!