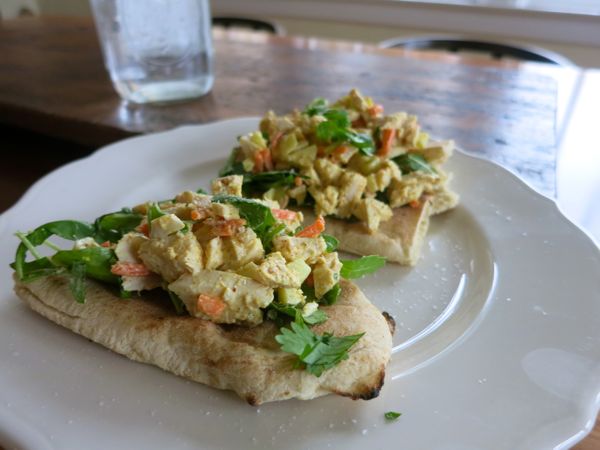 Way back in the 90s, when Oprah ruled the land, just before she single-handedly transformed the publishing industry with her Midas-touch book club, she featured a cookbook on her show, written by her private chef Rosie Daley. The recipe collection was called In the Kitchen with Rosie and was filled with low-fat, low-carb meals that Oprah credited with her dramatic weight loss. Rosie, as I’m sure you recall, sold like gangbusters, but, as with most of my circa-90 cookbooks (what’s up David Rosengarten!?) ended up in a dark, moldy corner of my jam-packed basement, coated in a grimy dust that gives you a small window into the dungeon-esque conditions on the bottom level of our house. (As one dinner guest said as he walked through it to get to our garage, “I like your basement. It’s very…humanizing.”)

Anyway, if you are thinking that the reason I came upon my Rosie relic was because I had finally decided to organize the chaos, you have way more faith in me than I do. No, I was merely digging up spare forks for a birthday party, and happened to see its spine in a leaning tower of hardcovers perched beside a dismantled crib. I should’ve known better, because the last time I did a drive-by grab from this tower it was Drinking: A Love Story (no relation) and wound up reading 200 pages of the memoir standing up right where I found it. (Wowowow, was that a wrenching read.)

But this was not going to happen with Rosie because as soon as I grabbed it, I knew what I was looking for: My favorite recipe in the collection. Maybe even my most favorite recipe from the 90s: The curried chicken salad spiked with crunchy apple, which we used to make for ourselves whenever we had leftover chicken in the fridge, or whenever we felt overly hedonistic and in need of a healthy recalibration. Like during holiday season, when every other night is spent stuffing our faces with cocktail-party gougeres and Chewy Molasses Cookies. Like right exactly now.

Curried Chicken Salad
The idea that you could replace most of the mayonnaise with plain yogurt rocked my world back then. Now, we use that healthy shortcut all the time.
From In the Kitchen with Rosie, by Rosie Daley.

Serve on toasted pitas or nan (as shown above) or on top of salad greens.

I used to LOVE that book. The “healthy” tomato basil pasta in there was a mainstay for years. I still make it every now and again when I feel entitled to eat carbs. Loved it.

i love twists on classics like chicken salad. i made this one last year and completely forgot about it till now: http://semiweeklyeats.blogspot.com/2013/08/reinventing-chicken-salad.html

I love curried chicken salad but never found a great way to make it at home. I can’t wait to try this!
Thank you!!!

@Tracey – I loved David Rosengarten! And I loved his shows on the Food Network. I watched all of them.

I make a practically identical chicken salad to this one and had no idea it was already a thing. But that’s awesome! Maybe I should work for Oprah haha

Oh, I loved that book! There was a lemony angel hair pasta recipe that I made a zillion times! This one I never tried. But now I will. Thanks for the memories!

The David Rosengarten reference makes me nostalgic for the early days of the Food Network when it actually aired instructional cooking shows. Back then, there was only one silly competition show, Ready-Set-Cook, with Sissy Biggers. Remember Cooking Live with Sara Moulton? And How to Boil Water?

I love dishes that use up leftovers. Made Nigella’s extremely simple and delicious ‘praised chicken’ for supper tonight:

With the leftovers, am thinking of making this:

It’s funny to, but I don’t really like chicken or tuna salad anymore without at least a little yogurt. I like the tang. My husbands curried chicken salad is a permanent fixture on my bridal/baby shower menu. Everyone loves it.

Our favourite thing to eat when neither of us wants to do much in the kitchen!

I used to make a balsamic chicken salad from that book all the time. I actually think it had no oil in the dressing. Could it be? My how times have changed. By the way, I’m still cooking constantly from DALS and I’ve had it over a year. I don’t see it headed to my basement anytime soon.

@Liza in Ann Arbor: Will you marry me?

Wow, there’s a throwback. I haven’t thought about the Rosie cookbook in a long time! It was in my first apartment with an unvented stove so it ended up with a sticky cover and out it went.
I agree with Liza that the DALS is still well used but I have trouble remembering if a certain recipe is in the book or on the website.
How about another easy weekly menu like the one you did with bolognese and pork?

Aren’t those chewy ginger cookies the best?!?! I first made them when they appeared in the magaizne two (?) years ago and they’ve been a holiday staple ever since. I baked up two batches last weekend for a cookie exchange and was happy to retain a couple of dozen for our freezer. Love them.

I laughed about your basement…! Ours is actually finished and quite nice (well, as nice as a basement can be) and I still don’t like going down there. I tell my boys and my husband that basements are where the boys go. They can find me in my kitchen 🙂

Anyways, the recipe is perfection to me and will go on my list of ‘things to make while husband is traveling.’

Wow, this made me so happy to remember! That was actually one of my very first cookbooks…because everything was easy. 🙂 I remember being utterly blown away by the concept of (brace yourself): sweet potato fries baked in the oven, not fried!

I found this the other day when I was attempting to clear out our laundry room (aka house dumping ground). Too funny. I loved this salad years ago and still make a version of it a lot

This sounds good to me, but I can pretty much guarantee that my teenagers wouldn’t touch it with a ten-foot pole. Like a lot of stuff that shows up on DALS these days

I made this last night for lunch today and I can’t wait to have it. I used Stonewall Kitchen Mango Habanero Aioli instead of Dijon and mayo to kick it up a notch.