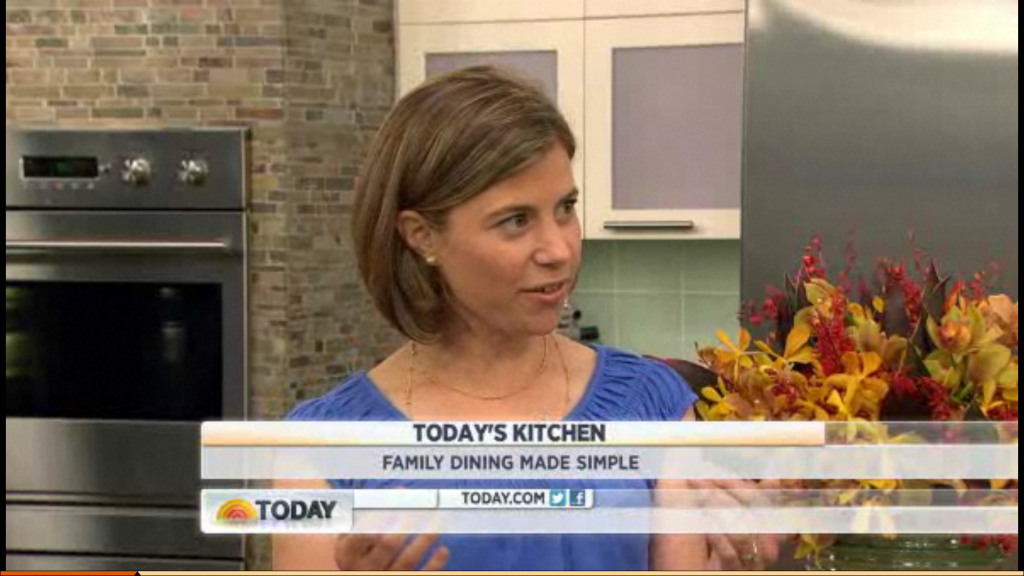 So I went on the Today Show yesterday to talk about some themes you know well by now — deconstructing meals, picky eaters, my Trickle-Down Theory of Dinner (see page 10!) and of course, the book itself. I’ve known about this segment for about three months now — my publisher called me with the news while I was watching soccer practice — and if I were a certain kind of person I suppose I would have been broadcasting this news all over the world, posting it on my events page and facebook, tweeting from the green room and all that, but the truth is: I was kinda terrified about the whole Live TV thing. To the point where over the past few months I’ve been dividing my life into two distinct eras:  “Before Today Show” and “After Today Show.” (As in, That Matthew Sweet concert is After Today Show, so I will really truly be able to enjoy it.) In situations like these — admittedly, very lucky situations like these — my default mode is usually pathological denial, to pretend like it’s not going to happen, until the very last minute when I’m forced to admit I have to somehow rise to the occasion. But here’s the thing about TV: You have to actually practice like crazy if you don’t want to dissolve into a puddle of anxiety or, in my case, freeze on the spot. (Ask anyone I went to college with: This actually happened to me in classrooms all the time.) And so I have been carrying around little index cards with me for weeks with all the possible questions that Natalie Morales (Natalie Morales!) would throw at me. You know, toughies like: Why did you write this book? Why is family dinner so important to you? Does takeout count? Why on earth do you write down what you have for dinner every night? What do your kids think of all this?

My kids were much more focused on their own days yesterday — my third grader had a field trip to the Bronx Zoo; and my fourth grader was getting her Field Day team assignment, which, trust me, is about eight thousand times more exciting than watching her mom prepare a salmon salad on TV — but the two of them took the time to make an index card for me that helped more than the other 25 combined. I carried it with me to the studio and here is what it said: 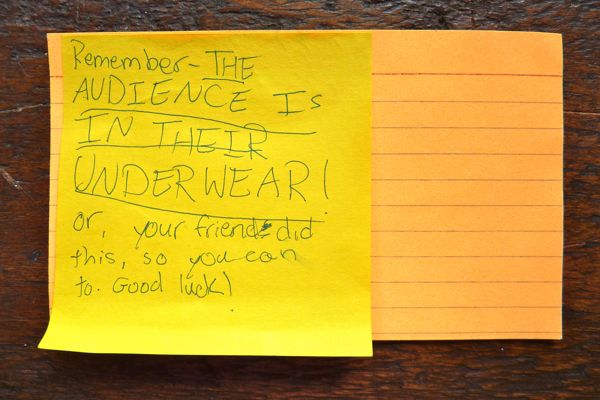 Remember the Brady Bunch episode where Marcia gets over her Driver’s Test jitters by picturing the instructor in his underwear? That strategy really stuck with Phoebe — she said she used it herself recently at her fourth grade concert — and I laughed every time I read her little reminder. (Side note: Remember, we watched at least three or four Brady Bunch seasons on our long road trip last year and I highly highly recommend you do the same, long road trip or not.) 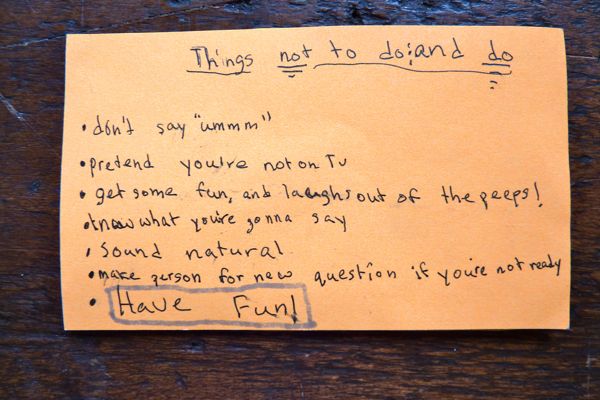 My friend Charlie (as in The Power of Habit Charlie, who you might say has been around the media block) took the train up to see me from Brooklyn last month so he could do his best impersonation of Matt Lauer at my kitchen counter and dish out some much-needed media advice. Abby, who loves nothing more than pretend play, was so entertained by this craziness and seemed to have absorbed all his pointers. At least that’s the only theory I can think of for how she came up with this “Things not to do and do” list. In spite of my nerves, I did manage to follow her last, most important order. If I can’t do that, man oh man, I’ve got to ask myself: What is the point?

Thanks to everyone for the nice notes about the segment, and below is the salmon salad recipe for those of you who just want to know what to make for dinner already! I think my favorite part of the whole experience was a few minutes after we wrapped when Natalie Morales walked out of the studio and, while gobbling up a big bowl of my salad, told me This is delicious! It was 10:00 in the morning. 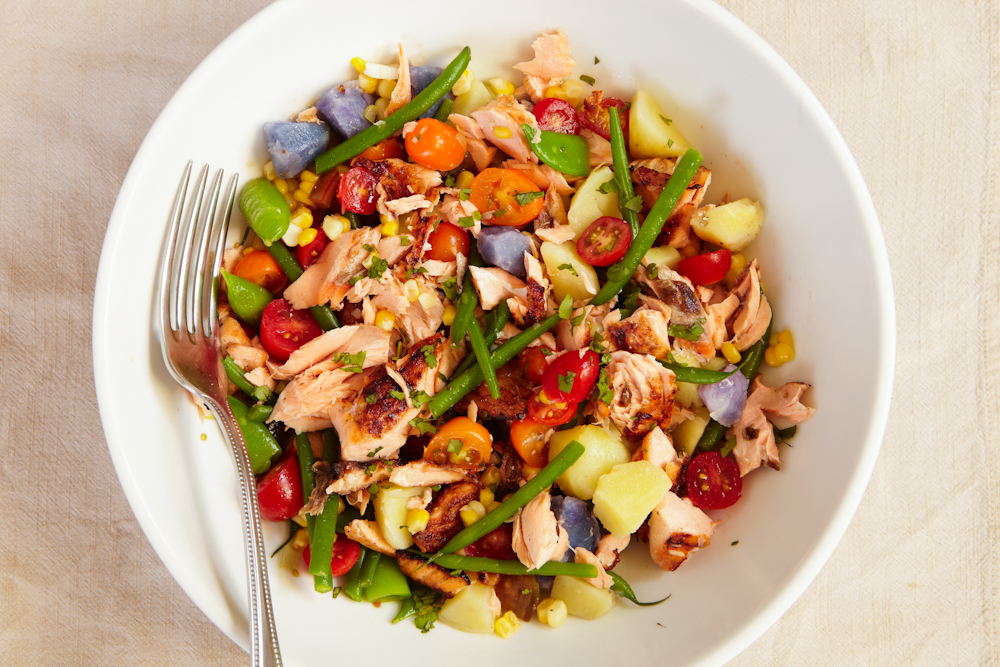 Preheat the oven to 400° F.
Make vinaigrette: Whisk together the vinegar, mustard, sugar, lemon juice and oil and set aside.
Make salmon: Sprinkle the salmon with salt and pepper. Roast in a foil-lined baking dish for 15 minutes. (If you prefer to grill the fish, brush with a mixture of olive oil, salt, pepper and a dash of honey and cook over medium-hot coals, 4 to 5 minutes on each side.)
Meanwhile, bring a medium pot of water to a boil. Add the potatoes and cook until a knife slices through them with no resistance, about 12 minutes. Using a slotted spoon, remove the potatoes to a large serving bowl. Add the corn to the same pot of water. Boil for 4 minutes. Remove to a cutting board, allow to cool, slice off the kernels and add to the serving bowl. Add beans to the same pot of water and cook for 3 minutes. Remove with a slotted spoon and add to the serving bowl. Add the tomatoes, cucumber, scallions and cilantro to the bowl. Toss with the vinaigrette and serve.

Oh God – the experience sounds nerve-wracking! I didn’t get a chance to catch it but I will try and hunt it down. I’m sure picturing everyone in their underwear helped – what a great strategy. Maybe I’ll do that next time I’m stressed at a board meeting. Actually, knowing the people in my office – maybe not. Probably more horrifying than relaxing!

Those notes are so cute — and I think all the practice paid off. You did look like you were having fun! And now I want to make that salad!

My friend one of the writers for the Today show and since I am always quoting your blog, she sent me a note letting me know you were going to be on the show. You did a terrific job. Got all your points across. I say there is a weekly segment in your future!!

Thank you so much Vicki! Tell your friend I felt very well taken care of!

Just watched it. You looked beautiful, the salad looked delicious, and I would never have known that you didn’t do this as a regular gig. You were great! Tell your girls those index cards worked magic.

I don’t know if you mentioned this early–I may have missed it–but you didn’t a fabulous job on NPR Weekend Edition talking about your book! And I love love love the notes from your kids.

Oh my! Typos galore. You DID a fabulous job on NPR (and maybe you mentioned it EARLIER). Next time I will proof before I hit enter!

Those notes are the best! You did SO well for someone (I am this way too) prone to freezing up. Great job!

Congratulations! You did great!

I’m new to your blog but i LOVE it. I love your voice and what you are saying. Anyway, you did a great job on television! The timing thing must be so difficult but you got through it all! It was so nice to see your deconstructing idea (for children) then the combined version for the adults. Love it. great job.

Good job on TV! Your philosophy is so sensible. Loved the way you told Natalie it was good to expose kids to more veggies than just the ones they eat. Those notes from your girls are classic

Yay you did a great job!! I seriously think I would’ve passed out from nerves. The salad looks delicious, I’ll have to add that to my must-try list. And the note from the girls is so cute and sweet:-)

just watched… you did woooooonderful!!!!

AND- your book came yesterday!!! it’s killing me not to open it, but i refuse to do it, until i have a very good length of time to ‘dig into’ it … later today- for SURE. 🙂

how cool are you?? love the interview, can’t wait to make the salad!!

I can’t get the video to play 🙁 I guess I’ll just have to look up the interview from NPR. I am hoping for your book as a birthday present, the wait is killing me!

I can’t get the video to play, either. Bummer.

I just love your book and I am planning to make this recipe for my family tonight! It looks delicious. I noticed that the recipe doesn’t have any instructions for when/how to toss the salmon in with the veggies. I assume I just do this at the very end? Before or after the vinaigrette?

Signed,
Your fan and an obsessive recipe-follower

Ever since my kids became old enough to watch TV in the morning so I could get ready for work, (which is probably way too young…) I don’t get to watch the Today Show much anymore. So I regret I missed your segment. But I love this post because I stumbled upon it when I was looking for a great, easy dish to feed the neighbors for dinner two weeks ago. Even though I have your book on my counter at home, I hadn’t gotten to this page yet, and besides I was at work and needed a recipe I could print and run to the store with on the way home. Long story short, my neighbors were so impressed, and a little embarassed that I would go through SO MUCH trouble to make them such a FANCY meal (which I prepared in its entirety while they were standing in my kitchen having drinks). They took the printed recipe with them when they left, and we enjoyed the leftovers all weekend. When they had us over for a casual dinner this weekend, they were still going on and on about the Salmon Salad, to which their hotdogs and hamburgers would never compare (but since someone else was making me dinner and feeding me, they were perfect!)

I’ve made it since then for just us, sorting individual ingredients in my little kids’ plates while we eat the assembled version. And it is such a generous recipe…I’m eating the leftovers at my desk right now!! Such a winner. So easy, so delish, and oh-so FANCY!!

Confession first. When I saw the photo of the salmon salad in the book, I quickly moved on. I remember reading this post, and even watching the video clip when you posted it, and *still* thinking that this salad wasn’t for me (even though I loved the cook-in-shifts-in-one-pot method).

BUT, on Thursday I left our freezer door ajar for about 7 hours, so I have been madly trying to use up things that defrosted and refroze (because I am not sure if that’s ok for things like fish). Since we have had salmon a lot lately, I really wasn’t looking forward more salmon … but I remembered this recipe, and thought maybe it would be good because it would be different.

AND HOLY COW. This was so, so tasty. I didn’t manage the scallions because it was getting dark out (I have a little container garden with scallions for just this sort of purpose) or lemon/lime, and I added raw kale because I love greens, but it was pretty close to your recipe. I was so amazed at how delicious it was. I think it’s the best dinner we’ve had in weeks.