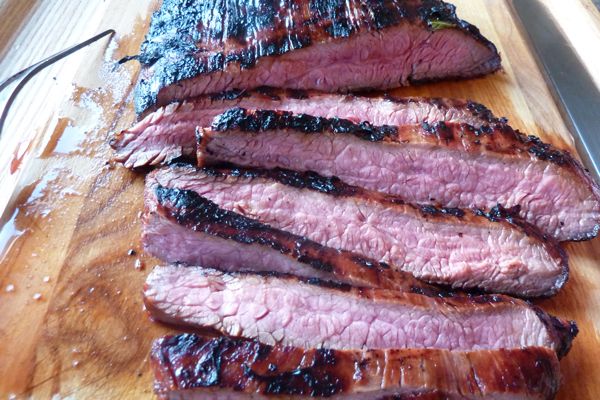 I was at a dinner party with two other couples last year when the host approached me discreetly in the living room. “Can you come here?” she whispered, motioning towards the kitchen. She led me to the oven, pulled out a roasting pan filled with eight split chicken breasts whose skin were all a nice caramel-ly brown. “They’re ready, right?” she asked. I always get nervous with thick chicken breasts, too, so I asked her how long they’d been in. “About an hour,” she told me. I had a feeling they weren’t done yet. “Can I touch one?” I asked. I poked one of them in the thickest part. It felt too soft. The rule for doneness with chicken, I told her, is that it should feel firm to the touch but not rock hard. “It needs more time.” Andy walked in and I pulled him over for his opinion. Along with his tight spiral and his general kindness towards humanity, gauging meat doneness is one of his greatest qualities. He poked the chicken once, and with a conviction I envied, declared, “Five more minutes.”

Five minutes later we were sitting down to a delicious, well-cooked herby chicken with market-fresh greens.

I can’t tell you how many times I have been in the same situation as my chicken-roasting host. Or I should say, how many times I used to be in that situation. It’s not that I’ve become so confident when face-to-face with, say, a lamb shoulder, or a $20/pound Christmas filet mignon or a bacon-spinach-stuffed ribeye, but I don’t stress about cooking meat to proper doneness nearly as much as I used to. Part of the reason for this — OK most of the reason for this — is that Andy is so preternaturally gifted with meat that it just makes sense to cede the floor to him when a Porterhouse or a flank steak is on the menu. But the other reason is that I’ve discovered a whole bunch of ways to prepare meaty main dishes that involve absolutely no stressing about doneness at all. These are the strategies I tend to fall back on when I’m having people over for dinner and there’s a 100% chance that I would be filling a sippy cup at the exact moment a meat thermometer would hit the point of no return.

1. Put Away the Meat Thermometer and Braise. Large hunks of meat become much more friendly when you braise them. This basically means you are cooking a loin or a shoulder in liquid in the oven or on the stovetop for a few hours at a low temperature. Beyond the fact that this technique makes it impossible to overcook or undercook, it magically transforms cheap cuts of meat into melty tenderness and is almost always just the thing for a warm-your-bones winter meal. See: Marcella’s Milk-braised Pork Loin; Braised Short Ribs; Pork Ragu; Baked Chicken with Mascarpone. (That last one is less braising than submerging, but it’s equally effective and takes much less time.)

2. Think Small. It’s much easier to gauge the doneness of small pieces of meat and fish than it is to make the call on larger pieces. Just think — if you’re not sure, you can break open a small piece of chicken in a stir-fry to check for the telltale shiny pink and the dish won’t be any worse for the wear. You can’t really do this with a whole roast chicken without releasing the trapped juices that make a perfectly roasted chicken so tasty. See: Chicken with Broccoli; Pan-seared Scallops; Beef with Broccoli.

3. Hack! One of the reasons I fell in love with salmon salad was because after a fillet was roasted or grilled you had to shred it into pieces and toss it with the vegetables and vinaigrette.  This meant that if you weren’t sure the salmon was cooked to proper doneness you could definitely take a peak in the middle with a knife or a fork or a pick axe — and if it wasn’t ready, just send it back for another few. Who cares what the thing looked like if you were going to eventually hack it all up, right? See: Salmon Salad.

4. Make Clams. Every time I prepare Andy’s clams — which, as you can gather by the name, is not that often — I am amazed at how easy they are. This meal is a bonanza for people who fret about whether something has cooked through or not. Think about how beautifully unequivocal it is that clams, when cooked properly, will open up their shells to tell you that they are done. It’s like they have little mouths. I’m done! Take me out! Eat me! To me this is as much of a miracle of nature as the Blue Footed Booby. See: Spaghetti and Clams; Steamed Little Necks

And for those of you more concerned with mastering the instinct as opposed to avoiding it, here are a few tips we’ve picked up over the years.

Let it Rest When it comes to steak, always take it out of the pan or the oven a little bit before you think it’s done and let it sit for 10 minutes. It really does continue cooking — and continues cooking on the platter, too.

Use the Palm Trick If your hand is relaxed and you push on the base of your thumb, the softness of that should be the rough equivalent of a leg of lamb or a piece of steak or a pork loin that has been cooked medium-rare. If you make a fist and feel that same part of your hand, it’s more like medium-well. It should have some give. The more a piece of meat cooks the firmer it gets.

Finish it in the Oven If you are cooking a thick piece of meat — like pork tenderloin, a big strip steak, double cut pork chops — it’s going to be very hard to cook that through on a grill or on the stovetop. It will have to finish in the oven.

Probes are Your Friends If you are lucky enough to have a probe on your oven — the kind that sticks into your meat and reads the internal temperature in real time, showing it to you on the display panel  — then by all means use it. You won’t have to keep opening the oven to stick in your meat thermometer and you will eliminate all of the guesswork.

Train Yourself in Private. When you are starting out, there’s really no good reason you should practice your meat making on company. Do it on a weeknight or when it’s just you and the family so you can take a little pressure out of the equation. The descending order of meat-cooking riskiness is as follows: Beef, Lamb, Pork, Fish, Chicken. I think you’d agree that nothing says “this friendship is over” quite like serving up a salmonella special.

These are great points but why not use a meat thermometer, especially for roasts and for thick pieces of meat on the stovetop? Just curious since I rely on mine quite a bit. Is an oven probe (which I don’t have) that much better?

…and this is why we so SO love you guys — DALS conistently manages to be both mouth-wateringly inspiring in an “ooh, ahh” sort of way, while also making us feel that you, too may in fact be actual people, and we are not alone (in this case, not alone in occasionally peering at the meat the same way we peer under the hood when the car makes a funny noise.) Some days y’all make us better cooks, and some days (you know the days), you just make us feel better about our lives in general. Thanks! We’re really looking forward to the book 🙂

My husband has a new trick for grilled steak — he sears it to rare, then wraps tightly in foil, then rolls in a towel to rest/insulate. He claims it’s inspired by sous vide techniques. I don’t really understand it but it makes for consistently fantastic medium rare meat.

GREAT post – doneness is one of my private crosses to bear. I can’t seem to get it right! This collection of tips should help.

I am a total nervous nellie (actually, probably not enough with myself, but when serving other people, I err too far on the rubbery side), so this is so helpful. Thanks!

I feel like this post could have been titled, “Four Strategies for Nervous Nellies, yes we’re talking to you Caitlin.” I use my apartment’s size as the main reason for not having a dinner party but the fear of salmonella or a burnt piece of rubber is right there with it. I have yet to cook a piece of meat without hacking into it so thank you for this!

These are terrific tips. May I suggest another? Develop one or two signature entrees — the kind you can make in your sleep that turn out great every time. You don’t always have to serve these to guests, of course, but it is nice to have a fallback.

I just came across this post and I can’t believe how helpful it was! I am a super nervous nelly when it comes to doneness on meats and this is so practical. Thank you!