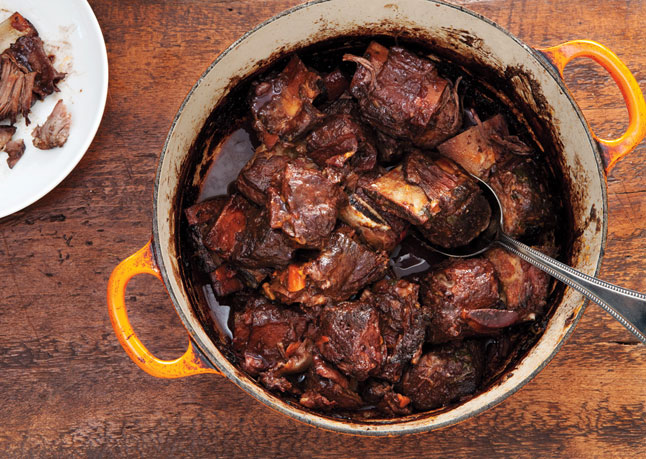 .
If you come to our house for a grown-up dinner party, there’s a good chance it’ll be just after 8:00, and our two kids will greet you at the door. If all has gone according to plan, they’ll be bathed and pajama’d, their teeth will be brushed, and with a little luck they’ll be in bed, out of sight, 30 minutes later.

It’s not that we worry about the girls being un-presentable or that we fear they’ll pillage the crostini plate before our guests have taken their coats off. (OK, maybe we do worry about the crostini thing. It’s a problem.) It’s that usually the people we have over for dinner are parents, too. Parents who have already spent the waking part of their day doing what parents do – suffering through another Wa Wa Wubbzy marathon, doling out snacks, pretending to lose at Uno – and probably, if they’re being honest, don’t feel a real powerful need to spend valuable babysitting hours doing the same with someone else’s kids.

In our experience, what our guests are looking for is a cocktail with plenty of ice, some tasty food, and a conversation that does not begin with the words, “I am counting to three…” So usually, after our kids make their Dinner Party Cameo – the key with kids, like food, is to leave your guests wanting more — one of us will take them upstairs and shepherd them through their bedtime paces, while the other sets the table and puts the finishing touch on whatever has been braising away all afternoon in the Dutch Oven.

Very often in our house, it’s short ribs. We love braised short ribs for three reasons: one, they’re unstoppably, almost obscenely good; two, they’re impossible to screw up; and three, they require no hands-on time once the guests arrive. Entertaining, for us, is all about not having to start from zero once the kids are in bed, chopping and blanching and reducing – and sweating — while our guests stand in the kitchen, hungry, with one eye on the clock. It’s about having a glass of Barbera and diving into a dinner that is ready to go, but that also feels simultaneously casual and special. And when everything goes right, you can almost forget — for a few hours, at least — that there’s a Thomas the Train track running through the living room, and that you have to be awake at 5:30 the next morning to perform a sock puppet show. – Jenny & Andy

This story appears in the current issue of Bon Appetit. Head over to their website for the Short Ribs recipe, which is a simplified version of an old Balthazar favorite. Photo by Christopher Testani for Bon Appetit.

Ingenious all around! I would serve short ribs over effortless baked polenta so I wouldn’t have to leave my guests (and cocktail) to fix mashed potatoes http://www.marthastewart.com/317466/oven-baked-creamy-polenta

I recently discovered your blog and I am an avid reader of Bon Appetite. It is the one magazine you can trust I will read cover-to-cover each month. When I started reading this post I thought, “Haven’t I read this already?”

I did not mind reading it again. Such great tips. Thanks for all of your inspiring ideas!

SHORTRIBS!! How I adore them. I only make them once a year (they’re kinda pricy!). Can’t wait to try this out!

I absolutely love this article! Perfectly relatable. And you can’t go wrong with short ribs!! My husband would live on those if I let him.

I think we may be living parallel lives. Great post.

Probably a silly question but as I’ve never cooked shortribs (or any ribs, for that matter) before – when you say the ribs are “cut into 2″ sections” – do I do that or would I buy them that way? Seems like if they have bones in, cutting them myself is not an option. Or am I missing something really obvious here?!? Thanks for the yummy looking recipe!

I just enjoyed DELICIOUS braised ribs (pictured here if you’re interested in seeing! http://torriesessions.blogspot.com/2011/09/shana-tova.html) but now I’m craving them as if I haven’t had them in months. Simply cannot wait to make these. 🙂

Excellent menu. If I may ask, how does one train children to stay in bed while there are interesting things going on downstairs? I am intrigued by the idea of having a life of my own again someday. 🙂

As always when I read this blog, I’m wishing that I was on your guest list…

! I’m brand new to your blog but I’m already completely obsessed. And we have the same big orange le creuset pot! I can’t wait to braise some shortribs in mine and make it look like yours <3

The husband and I do this ALL THE TIME! Great post.

Hi Jenny and Andy –
I read this short rib post the first time around, but a refresher is always needed, because now, this time around, I am actually going to make it! A good friend of mine and I get together on occasion sometimes with, sometimes without our children. This time without so this will be perfect for our Wine dinner tonight! I will be making a Tiramisu cheesecake for dessert! (my own experimentation). thanks guys for always having great food and great conversation!

at the bottom of my chest freezer is a little packet of shortribs. now i know what to do with it! plus, i read your newsletter. do i win the Inmod Teak Bowl?

Now, I want to make braised short ribs! I read your newsletter. Do I win the Inmod Teak Bowl?

Braised Ribs: A Chaotic Story
I decided this was the perfect meal to make my husband’s family, during a lovely fall weekend at our summer cabin. Getting the ingredients was such a feat. A terrific butcher is in another small town in one direction, and the only decent grocer is in the opposite direction in another town. We had only one car. So, I made two lists — gave the meat order (2″ short ribs) to my husband and I took the list for the grocery. After a long trip there, I got home and started the prep-work and made the homemade dessert. He headed to the butcher. All was going great. Eventually my husband came back, laid the wrapped pkg on the counter and then left to go golfing for the afternoon — taking the only car, leaving his cell phone behind. (big mistake) When I finally opened the meat pkg I realized he’d bought me a bag of frozen -solid caveman meat. We’re talking huge, Fred Flinstone bones as thick and long as as my forearm. What?!?? OMG! What do i do with these?? Are you kidding me?? I panicked! I was totally trapped. Nothing in the house for dinner. Company arriving in 3 hours. I eventually reached another player at the golf course who went and found my husband and had him call me. I must have sounded like such a shrew. “I can’t use this!! You read the recipe too! What the..?? You need to go back to the butcher!” Meanwhile, I called the butcher and he was confused “do you mean English Ribs? What’s it for?? Do you mean…? Huh? Can you send a picture of the recipe with your husband?” Of course I can! I have it right here I’ll call him to swing by…. Oh. Ugh…wait. No cell. errrrr. He was already in the car heading back to the faraway butcher…possibly getting the wrong thing. Again. Suffice to say, he bought the wrong thing again. At least it wasn’t frozen. So, 40 miles in the car later, countless dollars spent, and tempers flaring, we ended up cutting the new massive ribs on the table saw in the barn. I’m not sure why 2″ was such a hard thing for the guys to understand. But, it all turned out – albeit late on the table. Everyone loved the meal. I’ll take the picture to the butcher the next time for sure. btw: I read your newsletter. Do I win the Inmod Teak Bowl? – Tracy

I second kozlowwe’s question, how do you cut bone-in ribs? Also…

I made a version of these from Sunday at Lucques for Rosh Hashnah dinner last week. I got them from a friend from NY childhood who married a farmer here in Vermont and now hoards all the short ribs and won’t let him sell them, but I got special dispensation as matchmaker. The thing is SAC and Kozlowwe — you don’t need to cut them, they MELT off the bone. that is the joy and hedonism. so I just read your newsletter after reading the blog for months– do I get the Inmod Teak Bowl?

This looks amazing…
I read your newsletter. Do I win the Inmod Teak Bowl

THIS is what’s for dinner tonight. I will keep my girls up for this test run and then follow your lead when we have it again for future guests. Thank you for wonderful ideas! BTW, “Do I win the GetMaineLobster.com feast?” Thanks DALS!

These look yummy! Can’t wait to try it out. I’ve tried several of your recipes and not one has disappointed! Thank you!

Oh and “Do I win the GetMaineLobster.com feast?”

These are amazing, and they are even better the next day if you can put them away before you eat them all!
The fat is easy to remove and the flavors really meld together.
Do I win the GetMaineLobster.com feast?”

Help. I made these tonight and though I could drink the braising sauce straight out of a coffee mug (yes, it’s THAT good), the ribs themselves were not good. SUPER fatty, hardly any meat on them, and slightly stringy. I will admit that I don’t think I’ve ever had short ribs before. Is this just how this cut is? Did I get a crappy cut this time? Any insight is appreciated!

I made this for dinner last night. Amazingly, insanely delicious. My husband proposed all over again.

I may be losing my mind, but I swear there was also a beef short rib recipe you posted that was adapted from the Bar Baloud recipe (I think), but much easier. It had tomatoes and shallots and was heavenly when I made it. But, now I can’t find the recipe. This is the only blog I go to for recipes and I searched both of your cookbooks, all to no avail. Again, it’s possible I have lost it and saw the recipe elsewhere. I do have 3 daughters under 7 which can cause a mom to go crazy and forget things… but, if you have the recipe,can you send it my way?

I’m planning to make these for Christmas Eve dinner. But, I have a question. The short ribs we have in our freezer are not 2″ long – they are closer to 4″. Will that be fine for this recipe?

Hi – I have a question, even though I am about 5 years late here 🙂 I made (and loved) this recipe over the weekend. However, when we cut into the short ribs we noticed what appeared to be little clusters of…fat? I am not sure. It was jelly-like and inbetween the layers of meat. The meat was definitely not spoiled – it smelled fine and I bought fresh at a local butcher and the flavor was amazing. But, I am interested to know if that was in fact fat? And how to avoid it next time. Any thoughts appreciated if anyone out there sees this question!

Hi! I love the recipe but the link does not seem to work anymore!