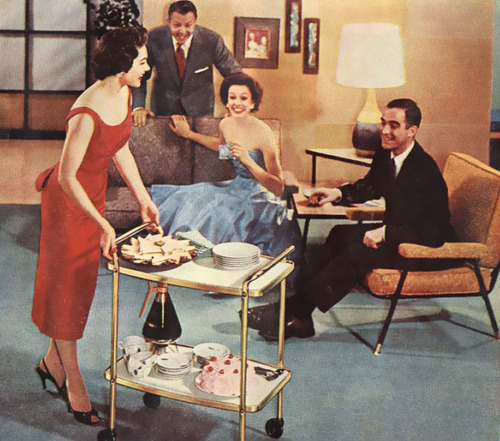 There are many reasons why I love going to Naria’s and Peter’s house for dinner. For starters, they live in my town, and I don’t think I’m the only one who feels that one of the great pleasures in life is having neighbors cook for you. This is especially true when those neighbors really know how to bring it in the dinner party department. Unlike in our house where having more than two or three guests feels like we’re running a restaurant, Naria and Peter seem to revel in the large, well-considered guest list. There are usually at least eight of us, the official invitation comes a few weeks ahead of time, there is a properly set dining room table, and I always wake up with a sore throat the next morning, because it’s non-stop talking from the moment we sit down to cocktails until we leave. (Again, SEE: well-considered guest list).

Another reason I enjoy it: Naria, a mom of three who runs her own business, is particularly adept at cooking while having a conversation — something I am always impressed by — so she doesn’t rule out ambitious dishes that involve a little octopus action at go-time, i.e. one hand on the wooden spoon, one on a glass of wine, one getting a sippy cup for her daughter, a few waving around in wild gesticulation to prove a point. (She’s almost always proving a point, yet another reason to love her as a host and a friend.) In the past, she’s made us Shrimp Bao, an Indian-spiced white fish number, and once I ran into her at the farmer’s market collecting ingredients for David Chang’s famous Bo Ssam, which she’d later serve to Peter’s boss. But this past weekend, she broke out the most ginormous Lodge Cast Iron Pan, cranked up the heat, and made a recipe she got from her mom: Salt-and-Pepper Shrimp. Unlike the all-day-affair that is Bo Ssam, this one took about four minutes.

Which is not to say it was easy. She had obviously done the prep work that afternoon, mincing all the aromatics, and trimming the beans she’d serve along with it. What she didn’t have to worry about was the slaw (that was our assignment) and something sweet to finish off the meal. Because somewhere along the way, she and Peter had struck a deal when it came to entertaining: If she’s on dinner duty, he’s on dessert duty. It’s only fair, right?

It’s certainly fair to the benefactors, i.e. their guests. In addition to being an exemplary host, Peter is what you might call gadget-obsessed. He was the first person I ever knew who could control the music in his house from the Sonos app on his iPhone. (Come to think of it, maybe he was the first person I ever knew who actually owned an iPhone.) When he’s not taking his kids to soccer practice, you might find him tooling around town on his electric Zero motorcycle. (And don’t me started on the planes — all I will say is that he can fly them. In the air.) Naturally, when someone like this is charged with dessert, gadgets are procured, and good things result. There is the deep-fryer he breaks out every weekend morning for doughnut making with the kids — something his parents did with him when he was young. There is the All-Edge Brownie Pan pan he baked blondies in a few winters ago that were sick — gooey and crispy in all the right places. (As far as I’m concerned the inventor of that thing deserves a MacArthur.) And this past Saturday, he made creme freaking brûlée, firing up his mini blow torch in the living room and crisping its surface right there on the coffee table before our eyes. Was it good? Put it this way: The enduring image I have is of Naria holding up her plate, closing her eyes, and licking it clean.

Naria’s Salt and Pepper Shrimp
Naria got this recipe from her mom, which calls for a wok, but Naria’s 17-inch Lodge Cast Iron Pan worked just as well. If you don’t make it for eight of your closest friends on a Saturday night, just make it for the kids on a random weeknight. It’s that easy. This version serves about four.

Combine cornstarch, salt and pepper. Dredge (dry) shrimp in the mixture. Heat wok over high heat, add oil and swirl to coat pan. When oil shimmers add the ginger, garlic and scallions and sauté, stirring until fragrant (about 30 secs). Add shrimp and stir-fry for 4-6 minutes until cooked through.

Peter’s Blondies
Peter adapted this from How to Cook Everything. If you aren’t equipped with an All-Edge baking pan, don’t you dare let that stop you. Whatever pan you make them in, they are off the chain.
8 tablespoons (1 stick) butter, melted
1 cup light brown sugar
1 large egg
1 teaspoon vanilla
Pinch salt
1 cup all-purpose flour
chocolate chips and mini-marshmallows, to taste

Butter your pan, whichever one you are using. Mix melted butter with brown sugar – beat until smooth. Beat in egg and then vanilla. Add salt, stir in flour. Mix in chocolate chips and mini-marshmallows. Pour into prepared pan. Bake at 350°F 20-25 minutes, or until set in the middle. Cool on rack before cutting and serving.

I’ve made those blondies before, but with M&Ms (pink for valentines day). I’m psyched to make them s’more-like! (as an aside: i’m happy people are still entertaining in your neck of the woods. i still host dinner parties, but no one else seems to.)

I love that system. It’s the opposite in my house, I am the baker and my boyfriend is the Master Chef. Whatever works!

Such a good system! I love that he’s sweet and she’s savory. It would definitely lessen the stress of dinner parties a bit.
I love dinner parties, but they stress Dustin out. I think it’s because I over plan, and the cook a lot! lol

Definitely going to give that salt & pepper shrimp a try. Also, your friend? She sounds like a complete superwoman – mind, blown!

How cool is it that you have neighbors that throw proper dinner parties?! I feel like the art of dinner parties are lost these days 🙂

Oh my… I’m so inspired by your friends… everyone should have people in their lives who host such fabulous dinner parties! A lost art.. I have a new resolution to schedule a real live dinner party with invitations sometime soon 🙂 Great post!

Just made these blondies – they are amazing.

I’m pretty sure I’m going to make both recipes this weekend – you have fab friends!

I am jealous that you have such nice friends who are also good cooks. I’m also jealous of Chris who made the blondies already. I think I will do so tonight. 🙂

We have friends like that. It’s always a pleasure to eat at their house because dinner is always stupendously good.

How big a pan for the blondies, approximately?

I made these brownies last night. My kids hated them but I thought they were to die for! Oh and 8×8 pan for size.

I’m addicted to your spicy shrimp. I’m eager to try this shrimp recipe.

I saw the brownie recipe and had to make them. They are amazing and so easy. Bonus points for only using one mixing bowl. I used white choc. chips and leftover toffee. Great recipe! Love the blog and the book!—————Jennie ( without a y : ) )

game on with those shrimp! and you have inspired me to have a ‘real’ dinner party! in colorado, people lean towards pot lucks…which are always fun, but not the same!

I saw the Naria’s Salt and Pepper Shrimp and it is really impressive. This is a great recipe. I will try it for sure.

I love people who can serve up delicious food and make it all look easy.

Thanks for sharing this great and simple to prepare shrimp dish.