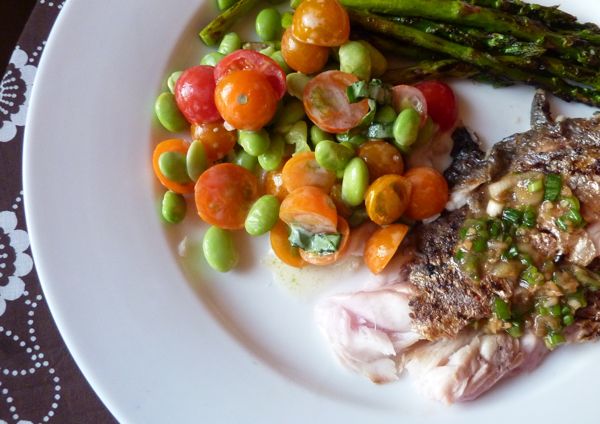 My NPR app has become something of a lifeline to the real world for me this summer. You see, since I no longer have my 8:43 commuter train to Manhattan, I no longer have my dedicated reading time for my New York Times. I know what you’re thinking — now that I’m working from home don’t I have big, fat, wide swaths of time available to leisurely read the paper cover to cover? (Or pageview to pageview?) Well, yes. I guess. But therein lies the problem. For whatever reason, in my life, Large Wide Swaths of Time seem to be the arch nemesis of Dedicated Time, and unless there is a ritual attached to something like reading, it becomes an effort. When it becomes an effort, it doesn’t happen. One of my School Year’s Resolutions is to figure all this out, but in the meantime, I have my NPR app. Lately I’ve been downloading a few programs to my playlist (usually some combo of “All Things Considered,” “Fresh Air”, and “Morning Edition”) and listening to them while I go running. Not only does it make me feel a little more up to date — it makes the run go faster. (Not to be misread as “It makes the runner go faster.”)

So anyway, last week, I was running and listening to Terry Gross interview Paul Greenberg about his new-ish book Four Fish, which is the story of how salmon, tuna, cod, and bass have come to dominate the seafood market and what that means for the future of wild fish. Terry Gross introduced the topic by saying that we are all in a state of “staggering psychological denial” about what the industrialized fish industry has done to sea life (and by extension what we are doing to sea life by demanding our fish sticks and cod cakes). But by the end of the interview, just at the moment I was getting ready to slit my wrists, Gross asked Greenberg which fish we could eat in good conscience — which ones weren’t overfished, which ones weren’t being factory-farmed and ruining local ecosystems, which ones had good “omega-3 profiles.” Greenberg replied that wild salmon was a good choice (though a good deal more expensive than regular); so was farm-raised tilapia (not the best source of good fats, but apparently they have figured out a way to farm tilapia without wreaking havoc on the environment); and so were all those little fish like anchovies, sardines, and mackerel that I always discounted as too fishy for my kids.

This was all on my mind last week when Andy came home from the market with a beautiful, local, yellow-spotted guilt-free mackerel. You could see a neat little row of the fish’s tiny, sharp bottom teeth, which made him look a little angry (can’t really blame him) and Abby was fascinated by it — poking and prodding, half expecting the fish to come to life. I did too when I tasted the thing — because it was craaazy fresh so had none of that fishiness I assumed would be off-putting. It was like a rich tuna. But a tuna that we could actually feel good about eating. And the intensely flavorful ginger-scallion sauce Andy made (you want a strong sauce on a strong fish) closed the deal for me. The girls, sensing some sort of cosmic mandate I’m sure, ate (almost) every bite, too.

Note from Andy: If you are even a little bit intimidated by the idea of grilling a whole fish, don’t be. The only remotely difficult thing about it is taking the meat off the bone.  Here is a link that will help you, but he swears it’s very intuitive. 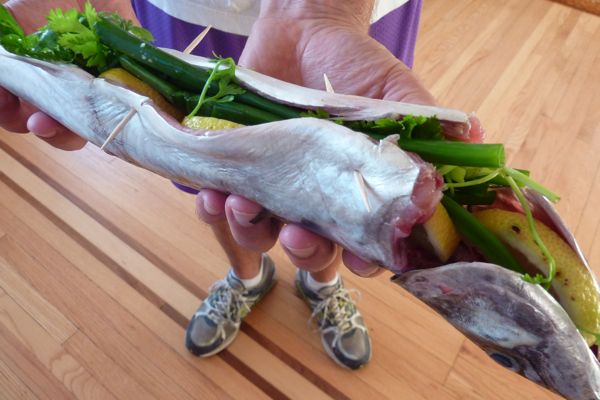 Pat the fish dry with paper towels. Fill the body with lemon slices, scallions, cilantro and drizzle in a bit of olive oil, a squeeze of fresh lemon juice, salt and pepper. Seal it with toothpicks as shown above. Score both sides (that means make a few slits in the skin) and brush with olive oil. (Very important so it does’nt stick.) Grill for about 4 to 5 minutes per side and cut each filet off the bone. Top with…

We served with what I think I will now crown the Official Salad of Summer 2010: Cherry Tomatoes with Soybeans and Buttermilk. (A simple tomato salad would have been fine, too.)

That looks quintessentially summer! Also I love this posts title!

I have only had mackerel as sashimi and it was a bit potent for my taste. Good to know that it’s an eco friendly choice. I’ll have to give it another chance with a strongly flavored sauce.