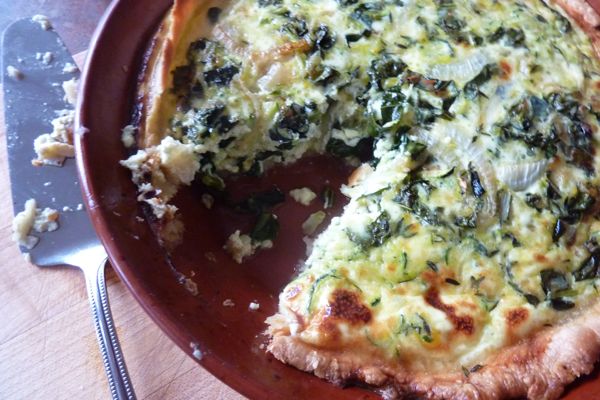 When my childhood best friend Jeni got married ten years ago, my mom and I threw her a shower in our house. I still remember the menu. Probably because I wrote it down in my Dinner Diary but also because it was so perfect if I do say so myself! There was a baked goods and pastry spread, a smoked salmon and bagels station, and my mom and I each baked a quiche — one vegetarian and one classic ham and gruyere. I hadn’t ever made one before and couldn’t believe how simple it was (totally back-pocket-worthy). The only problem I had was with the frozen pie crust I bought. It came in one of those ugly aluminum pie plates so I attempted to transfer it to a prettier, more shower-appropriate one…and ended up cracking the dough. So I smushed the crust into a ball, spread it out again with a rolling pin, and placed it in my nice dish. Later, when Jeni’s mom (who also happens to be Rosa, one of my kitchen heroes) was deciding which quiche to eat, she pointed to mine and said “You know that one is going to be better because the crust is homemade.” I laughed a little uneasily — but because she was one of my kitchen heroes, and because I was secretly proud that my crust did indeed look all artisanal and rustic, I didn’t confess to my crime. And I’m embarrassed to admit that in the decade since, I have become a repeat offender. 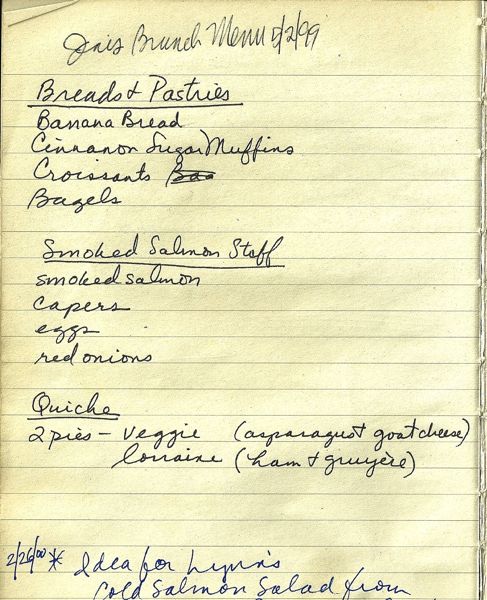 Basic Back-Pocket Quiche
You can pretty much swap out the feta and chard here for any combination of cheese and vegetable that appeals to you. Just make sure whatever veg you choose is chopped.

Preheat oven to 375°F. Prick the bottom of your pie crust with a fork and pre-bake it for 8 minutes. While it’s baking, whisk together milk, half-and-half, eggs, and some pepper. Remove the pie crust and sprinkle the cheese, onions, and half the vegetables on the bottom. Pour most of the egg mixture on top, then add the remaining vegetables, stirring gently so they are partially immersed in the egg mixture. Bake for 35 to 40 minutes until a knife inserted into the center comes out clean. If the top hasn’t turned that appealingly golden brown color, broil for a few minutes at the very end.

I love the idea of a back pocket recipe, and quiche is a great one. Always a crowd pleaser.

Which pie crust do you like? I’ve tried a few and they always end up tasting sweet.

Honestly, you have the best stories. This is really cute.

I have an insane fear of pie crust. (I like the Pillsbury one in the twisty can–near cinnamon rolls and other refrigerated pastry stuffs.)

That said, I had a small garden’s worth of collard greens earlier this year, and made quiche with some of the leftovers. Loved the results.

There’s something about quiche, even though it’s fairly simple to make, that just feels “fancy.” (Is this what being a child of the ’70s does to you? Frenchish food forever feels fancy?)

I used to be super intimidated by pie crust too. But now Ican’t stop making it. Except during the summer; there is no running the oven during the summer. I follow a lovely blog called The Art of Pie and she posted her crust recipe not too long ago.
Jenny – I hope you have central air or took that photo a long time ago.

I bought the refrigerated Pilsbury for a long time until we started shopping pretty much exclusively at TJoes. So now we buy the TJoes one. Cindy – Yes, we have central air — but I would’ve probably turned on the oven anyway. We ate it outside at least…

good ol tjoes…the closest one to us is 3 hours away. That does not stop me from going often. Three hours is not too far to drive to go to the g store, is it?

Just found your website (courtesy of whole living mag) and I am already an avid fan. Looking forward to may dinners in the future, and thank you for sharing!

another whole living mag viewer! this recipe sounds scrumptious and I’m excited to start following your postings. This recipe will work well in the coming winter months.

We made this tonight. I was delicious. Making your own pie crust really is “easy as pie”…flour, butter, water=Yummy. Only takes a couple of minutes. Have no fear of pie crust.
Thanks for the recipe!