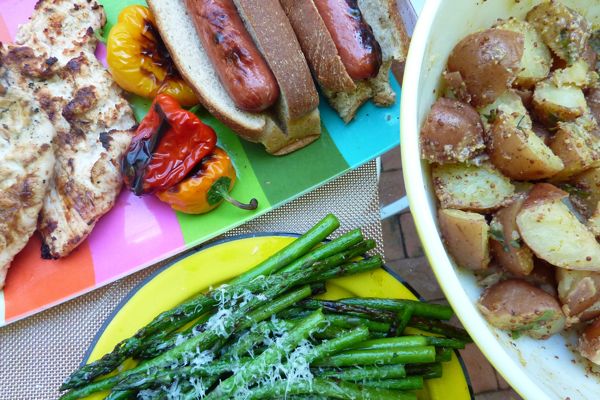 We never used to grill chicken. It was… eh. Never quite satisfying. We were always throwing it back on the grill (“does this look cooked to you?”) because we were paranoid about getting sick, or complaining that it was too dry, or overwhelming it with some ketchup-y four alarm KC BBQ sauce that, instead of tasting good, just ended up burning and tasting like ash. Then, last summer, we discovered two tricks that turned some things around for us, chicken-wise:

1. Pounding the cutlets flat, which makes them very easy (and quick) to cook evenly, and
2. Marinating in yogurt, which seems – by some trick of physics – to result in unfailing juiciness. 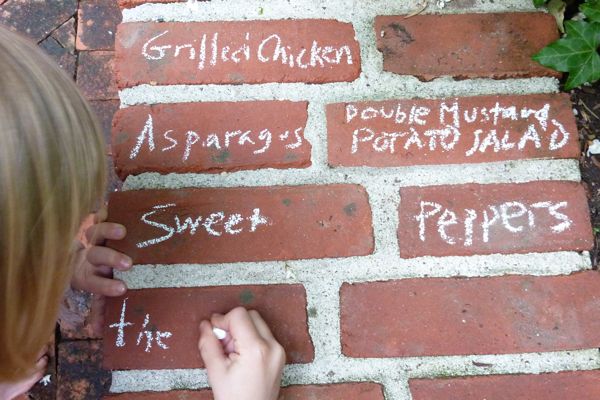 Though we don’t exactly advertise it to the kids, we pretty much add yogurt to all of our chicken marinades now – we do a curry-ish one, a onion-ginger-cilantro-and-lime one, and the one you see here, which we’re calling lemon pepper chicken. Try it with some good potato salad, grilled asparagus, and some cold rose. The marinade takes all of ten minutes to prepare, promise. — Andy

Pound boneless cutlets between sheets of wax paper until thin.

Whisk ingredients together until emulsified. Then, pour into Ziploc storage bag, drop in the cutlets, mush around until coated, and seal. Put in refrigerator for a minimum of 3 hours.  When grill is ready (and oiled), cook about 3-4 minutes a side until flesh is firm but not rock hard.

Double Mustard Potato Salad (adapted from How to Cook Everything)

Chop baby red potatoes (don’t peel) into one-inch chunks (as shown).  Boil in salted water, 12-15 minutes, or until tender. Rinse and set aside.

In a mixing bowl, add oil, both mustards, balsamic vinegar, salt and pepper. Whisk until thoroughly combined. Add potatoes to bowl and stir gently, to coat. Sprinkle with torn basil leaves and serve. This is best eaten when the potatoes are still warm.

Nothing is easier than grilling vegetables – and, for my money, grilled asparagus is the best of them all. The slight crust of char on the tips adds a really nice crunch. Our girls pick them up by the bottom and eat with their hands, like pretzel rods.

Trim bottom of asparagus spears (I usually cut off the bottom inch or so). Put in baking dish with a decent amount of olive oil and generous salt and pepper.  Toss until coated. The key to grilling these – and I realize that even admitting this says a lot about my IQ – is to put them perpendicular to the grate, so they don’t fall through. (Like I said: not too smart.) Cook for 4-5 minutes, rotating occasionally with a pair of tongs to cook them evenly. Sprinkle with grated Parmesan and serve.

The kids do usually eat the chicken, but we wanted to try out another new discovery from TJoes — their nitrate-free, uncured, all-beef hot dogs. The sacrilege here was not that we were preparing two separate meals, but that we were not grilling Hebrew Nationals.

Hi! I LOVE this website! I am sooo glad that i have discovered it (thanks to nonchalant mom!). We need major grilling help at our house (my husband burns everything he tries to grill) and this seems so easy….we are gonna try it this week. I have a totally random question for you….i love your round kitchen table and red chairs….and i have been on the hunt (unsusccessfully) for something modern that i love….would you mind sharing where you found them?! Thanks! and i can’t wait for your cookbook to come out. 🙂

Kristin! The chairs are from DWR (the outlet in the Seacaucus) but last time I checked they didn’t sell them anymore. I’m going to put together a kitchen chair post for you. Come back next week for it ok?

the potato salad sounds SO good!!! i love anything with potatoes or mustard, so it’s a double whammy. also, i’m SO excited for your cookbook.

We often marinade chicken in yogurt and I agree that it really makes the meat quite juicy, but I never thought to pound the chicken in to cutlets before grilling (I think I thought they might burn or get too dry) – what a great idea! We have chicken on the menu for this coming weekend and I’ll be sure to give that trick a try. Thanks!

Thank you so much!!!! I am super excited and am highly anticipating the post!!!!!!

we made this whole meal the other night and it was delicious! my 3 year old tried it all- didn’t love the asparagus- but she LOVED the potato salad and chicken. thank you!

YUM! Have already made the chicken twice this week. The second time around, I added fresh thyme to the marinade. Even yummier. Thanks!!

You are absolutely correct that boneless chicken cutlets have to be marinaded. For people who do not want to use yogurt (lactose intolerance/allergy or other reasons). I have gotten very good results using one part olive oil, three parts lemon juice, along with garlic crushed slightly with the edge of a knife and some oregano. While the chicken is on the grill, we cook the remaining marinade and use it as a sauce.

I can’t begin to tell you how in love we are with this chicken. We’ve made it about once a week since you posted it. I love the fact that it’s fast, requires almost no prep and I make the marinade in the morning, then just cook it when I get home. You mentioned that you have a couple of variations for it and I would be great if you posted those too. Thank you!

I would love those recipe variations, too! We made this chicken last week, and we’re making it again tonight. Actually, I messed up last week’s recipe, adding in the Dijon mustard intended for the potato salad (oops — not paying attention). But it turned out great! I recommend adding some mustard in for another variation.

The chicken is fantastic! Thanks for a great recipe. I’ve made it a few times and have some marinating in the fridge right now. Before I made this, it had been a few years since I bothered with chicken cutlets. I’ve started adding in a few extra cutlets to use during the week in sandwiches.

I must make this chicken marinade (or variation thereof) at least once a week. Thank you!

Just stumbled across your article in whole living and wow so glad I found you! What a great resource you are!!! Not to mention inspiration. Thanks and can’t wait to try this recipe.

thank thank you! It worked we all liked it – which is a big achievment in our family

Hurray for yogurt! Even made the frozen TJ chicken breasts so juicy that my husband commented. Putting this in the rotation!

This was a huge hit in my house, too. What’s the deal with the curry-ish one? Curry powder, ginger, and garlic?

I’m so excited about the prospect of enjoying chicken again! I have suffered the same chicken breast blahs in recent years. Can’t wait to try the yogurt trick! Can you share the other yogurt marinade recipes?
Thanks for the inspiration!

Wow. We made this chicken tonight. My 9 year old son who will only eat pasta, mozerella cheese, rice, and fried chicken cutlets, had 3 huge pieces. Our whole family loved it. Thank you so much! I’m new to this site and I’m enjoying it and have already printed up so many recipes 🙂

Just wanted to report back that this has become a summer staple in our house. Circumstances led me to make the following changes (w/ great results): subbing skinlesss boneless thighs for the breasts, using juice of one lemon plus zest, and adding some oregano (either fresh or dried). Delicious!

We made this chicken last night, christening our second propane tank of the summer. So delicious! Moist, flavorful – definitely going in the ‘make again’ pile.

I don’t know if you write answers to questions here, but what kind of plain yogurt do you recommend? No-fat, low-fat, greek? Some are thin and kind of watery; others are thick and pasty…?

This sounds easy and delish!

This recipe never gets old. A warm day in brooklyn. Grilled yogurt chicken, lentils and cous cows. What could be better! Thanks!

By the way, re: my previous post: Cous cows is NOT some incredibly creative way that I shape cous cous into the shape of a cow in order to inspire my children and show them that every experience is a learning opportunity. It is just a sad typo!

I made this chicken yesterday and it was incredible. As you mention, it really did take fewer than 10 minutes to mix up the marinade and toss the chicken in. Several hours later, I grilled the most moist and flavorful chicken that I’ve had in a long time. Thanks for sharing the recipe.

I am digging this recipe up because I wanted to post about what a welcome hit it has been at our house this summer. I’ve made it a few times, most recently with bone-in chicken thighs. No complaints! It was perfect. Such a great marinade and gives great flavor to the chicken. My two picky eaters love it and nothing makes me happier than hearing my 7-year-old tell me how much she enjoys dinner 🙂 I always enjoy your book and blog.

Having discovered yogurt marinades fairly recently, I can say that I absolutely love them. The problem is that most other chicken recipes pale in comparison.
Thanks for the post!

When you wrote that you have eaten these twice a week all summer, I could not figure how I had not tried this recipe. Cutlets currently marinating. Of course I tasted it before adding the chicken and I think I’ll start making just the yogurt/marinade for breakfast. And desert. And lunch. My honey squeeze and your honey squeeze might not be the same.

We made this yesterday with chicken breast on the grill and 2 of our 3 picky eaters gobbled it up. That is an unprecedented nuggetless poultry success for us.

I also marinaded some baby eggplant halves in the same marinade (scored the flesh first for max marinade uptake) and grilled for myself (vegetarian). Yummy.

I wonder, is the 2 tsp of salt really correct for 1/2 cup yogurt, though? That’s a lot of salt! Mine tasted so salty I added another 1/2 cup yogurt, but I noticed that a similar BA recipe uses 2 tsp salt for 2 cups yog. Do you make as written?

Agreed. This marinade tastes really, really salty even after I added more yogurt, but maybe less so when its cooked? Any advice on this?

Been a fan for so long of the site and finally made this dish and wowsers, it’s a winner!