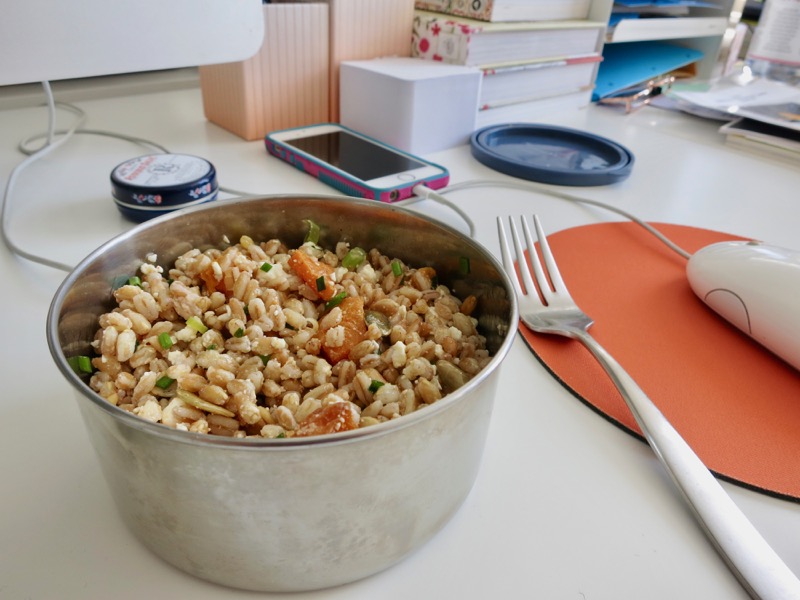 So there’s news on the Dinner: A Love Story front: I am one step closer to world domination, having taken actual, physical, tax-deductible office space outside my house, roughly two miles from my front door, and two miles plus ten feet from my kitchen. I share a space with six other enterprising businessmen and women, all of whom you will be hearing more details about very soon, but first…priorities, i.e. lunch. Or, as Bon Appetit once coined it, Lunch Al Desko.

Given that my kitchen was always a few steps from my office (if not the de facto office itself), I never had to think too hard about my mid-day meal. There is always a hard-boiled egg in the fridge — I prepare about a half dozen on the weekend — that I could chop up and throw on a salad, or a tin of smoked trout from Trader Joe’s that I could drape on a Finn Crisp and top with gherkins or pickled anything. Usually there’s an avocado lying around that I can smash on good toast (city peeps: I’m so into that Ryeborg they sell at GCT’s new, astonishing Great Northern Food Hall). Those are my go-tos, if we’re not also counting the results of whatever baking project my kids attempted the day before, and they’ve never failed me.

Until now. Because now, NOW! I have to plan ahead, and pack ahead. I really love my co-workers, but I’m not quite at the place yet where I can sit three feet away from them eating trout or a hard-boiled egg. (Who knew I had such a proclivity towards stinky lunches?) As for the avocado toast: If you have any advice for a roadie version that will not turn army green, I’m all ears.

My solution, at least for the time being, takes the shape of this formula: [[Trader Joe’s Pre-cooked Something Or Other]] + [[Sauteed Leftovers & Vegetable Scraps]] + oil & vinegar. Longtime readers know that I’m a longtime fan of TJ’s 10-minute grains (barley and farro) and lately I’ve been picking up their shrink-wrapped, pre-cooked lentils, too. Yesterday I sautéed a handful of white mushrooms (sliced), shallots, leftover green beans, and red pepper flakes, and mixed them into my U-Konserve with feta, those lentils, some white balsamic vinegar and olive oil. That was a good one. Today, I have the tiniest bit of last night’s slow-cooked pork mixed with lentils, roasted butternut squash, and pickled shallots. Last week, my favorite so far, was the farro salad with roasted butternut squash and pepitas below. I liked it so much, I made another batch for dinner.

Sure, it means I start work a little later, but that part is canceled out by another formula: I am ten times more productive when I’m sitting next to productive people. I will drill down on the science of that later.

Farro Salad with Squash and Pepitas
This makes four side servings for dinner or 2-3 full-on lunches to take to the office.

In a medium-large bowl toss together:

-3 cups cooked farro
{If you don’t use TJ’s pre-cooked 10-minutes farro, here are cooking instructions: Add 1 cup rinsed farro and 3 cups water (or chicken stock) to a pot. Bring to a boil; reduce heat to medium-low and simmer 30 minutes. Drain.}

I always slice my avocado around the equator or whatever it’s called and put it in a baggy intact with half a lemon, then put my bread in a separate bag. At work I scoop & mash the avocado & make toast. Generally works pretty well unless you don’t have a little kitchen area.

This is such a great idea! Never thought of just packing a whole, cut, avocado.

Congratulations on the new office situation!
My strategy is to just cook extra when I’m cooking dinner. Leftovers make excellent lunch and then I don’t need to figure out lunch or spend time making something for lunch. I even pack my husband’s lunch and mine as we clean up after dinner. Unless we’re having fish/shrimp or something stinky but, I try to plan them for Friday dinner. Hope you have access to a microwave in your new office.

woah….you tucked a tiny bombshell into the middle of that article…. “a tin of smoked trout from Trader Joe’s”
Somehow, the existence of this product has completely eluded me in over 10 years of shopping at Trader Joe’s. I had NO IDEA they sold smoked trout in “portable” sizes! My stomach thanks you.

Thank you, I just bought some 10 minute farro and wasn’t sure what to do with it! 🙂 For my avocado toast lunches, I have a toaster at my office. So I just take one or two pieces of whole grain bread in a ziplock or container, and a whole avocado in my lunch bag. At lunch, I just toast the bread, open the avocado and dump it into a bowl, mash it up with a fork or spoon, add some salt and pepper and smear it on my toast. Sometimes I also throw a tomato in my lunch bag and just slice it up at lunch time. It requires a little prep at the office, but it seriously takes 2 minutes so no big deal at all.

I take half an avocado to lunch in a small “tupperware” with cut side down (for the half without the pit) and it stays fine. Then for the side with the pit, I put it in a zip lock bag and try to get all the air out – still not bad.

Something else I started doing lately is making a big batch of farro then freezing it in portions in a silicone muffin tin (like I used to do with baby food). Then I pop them out, put them in a freezer bag and I’m able to just take out enough for a day at a time. In the morning, I’ll put them in a container with other salad stuff and they defrost by lunch, but don’t put off extra moisture. That way I don’t have to have the same thing every day of the week.

I can’t wait for you to continue to tackle the “what’s for work lunch” question. I’m always looking for ideas that are healthy and still tasty by the time they’ve made the commute. My office take out habit has gotten so bad that I’ve created a “work lunch” category in my mint.com account!

I usually have leftovers for lunch, but if that’s not possible I have a new go-to: homemade frozen burritos. I heat up a can of refried beans and mix in chopped veggies, cumin, garlic powder, cayenne, and a squeeze of lime, then divide it between four-five soft taco tortillas. Wrap and freeze, and then just nuke em when you’re ready to eat them. So yummy and filling!

I like TJ’s pre-cubed squash. I really don’t like chopping it myself since it feels dangerous with our less-than-stellar knives.

tjs japanese fried rice (frozen) with add vegetables – sauteed mushrooms or spinach or something like that. Also the lentil wraps with tahini dressing in their prepared section is really good. I also get the skipjack tuna or smoked trout and add celery, diced cornichons, mayo. Even though it’s fishy – I think it almost smells more like bacon because of the smoke.

Oh, if you get the guacamole at tjs that comes in a two-pack (avocado’s numbers?) it travels well and you can use one container for lunch – I use it as a sub for smashed avocado when nothing is ripe.

My go to lunch when I was working was a cup of whatever soup I made that week and a salad. I will admit that I needed to pack my lunch the night before because it just didn’t get done in the morning.

I also recently tried the Smitten Kitchen recipe for one pan tomatoes and Farro. Dead easy to make and it tastes great! I used the whole onion and cut up a couple of tomatoes instead of using grape or cherry ones because that’s what I had.

On the leftovers front, you can make some burritos with bits and bobs from the refrigerator.

I give up meat for Lent each year, and this has become my default lunch. Usually some type of whole grain (Aldi has great mixes of farro, bulgur, quinoa, spelt, etc that cook in 10-15min), leftover veggies, some type of protein (usually roasted chick peas), and a tablespoon or two of leftover sauce (creamy walnut sauce, red pepper almond sauce, pesto, etc)

I make a lot of salads like this for lunch al desko to use up all my left overs. I rotate lentil, farro, quinoa, and couscous with what ever vegetables I’ve gotten at the farmers market. I almost always dress mine with the citrus vinaigrette from Bon Appetit – http://www.bonappetit.com/recipe/citrus-vinaigrette#top. Make it with the Orange Muscat Champagne vinegar from Trader Joe’s to make it taste even better.

I made this today to take to the office for lunch this week, I was going to just serve it on greens, but there was so much dressing that I added some baby kale to the farro and squash, and it came out very well, less containers to take to work.
I will look forward to eating it. I love TJ’s farro.

Keep the pit in there and it won’t turn. Works for quac too!