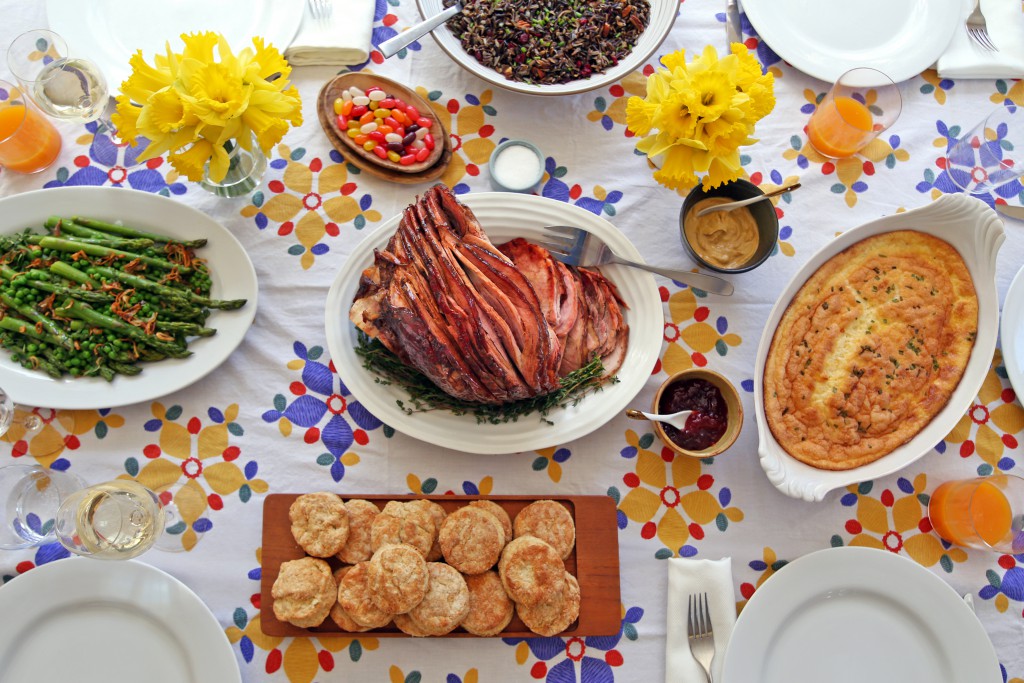 My father’s mother, Grandma Tillie, didn’t attend my parents’ wedding. She was Jewish, raised in an Orthodox household by parents who had been born in a Romanian shtetl—and her oldest son marrying a Presbyterian from western Pennsylvania had not exactly been her idea of kosher. Naturally, her wedding-day protest weighed heavily on my father, but once my parents tied the knot and, a year later, had my sister, Lynn, Tillie’s boycott all but lifted. (I suppose if anything is powerful enough to disrupt generations of tribal tradition, a new grandchild is it.) And anyway, in spite of my mom’s non-Jewish leanings, Tillie loved her. You can’t not love my mom. She was elected homecoming queen in college, for crying out loud— most likely because she’s nice to everybody. Everybody. Even to a mother-in-law who was a no-show on her wedding day.

Tillie died two weeks before I was born, and however impressive her strides were on the religious tolerance front, I do always wonder what she would’ve made of the fifteen-pound ham that arrived on our doorstep every year, just in time for Passover.

It wasn’t for Passover, of course. It was for Easter, but, like Christmas and Hanukkah in our house, the two holidays would often blur together. The ham, which would be the anchor of my mom’s Easter table, came in a box stamped CATRINO’S MARKET and was accompanied, every year, by the same simple note: “Happy Easter! Love, Albert.” Albert was my mom’s older brother by twenty-two years. He still lived in the small Pennsylvania town where they had grown up, and he ran the now-closed store my grandfather had opened when he moved to America from Italy in 1900. Like my mother, Uncle Albert was a workaholic, hardly ever closing Catrino’s Market for vacation or travel, which meant that we only got to see him for weddings and special occasions.

But once a year, at least, we could count on Uncle Albert’s ham.

I’ve never asked my dad how he felt about the ham’s arrival—I’m guessing it’s something akin to what Woody Allen felt when Annie Hall ordered her pastrami on white bread with mayo—but I can tell you one thing for certain: No one looked forward to that delivery more than I did.

Uncle Albert died in 1997, the year I got married, so Andy never got to have the true Catrino Passover-Easter (Eastover?) Experience, which is a shame because he might be the only one who loves a ham (and the ham-inspired leftovers that follow) more than I do. So we’ve given the ritual our own spin, trotting out a ham whenever possible, but almost always alongside something on the table that also nods to our entire family religious history. (Book owners already know about our “Interfaith Sliders” made with ham and brisket.) That means for Easter Brunch, a spiral ham is at the center of the table, but it’s preceded by a bowl of matzoh ball soup and accompanied by a Wild Rice Salad that is my go-to “what-can-I-bring” dish for Passover. For dessert, there will be some sort of decadent spring-like confection but it will sit next to a flourless (read: Passover-friendly) chocolate cake.

It’s a feast that’s mix-and-match in more ways than one. Other than creating a table at which both Uncle Albert and Grandma Tillie would feel comfortable, we also want to keep the kitchen work manageable, i.e. even though celebrate everything doesn’t mean we have to cook everything. This is where the prepared food section of Whole Foods Market comes in. We can order a few big-ticket items through online ordering for either holiday — the gorgeous chef-prepared glazed spiral ham, a few batches of matzoh ball soup, dessert — then fill in the holes with some easy homemade side dishes, like that Wild Rice Salad (made with cranberries and chives), a springy green pea and asparagus salad, and a light-as-air egg-gruyere souffle. It’s a strategy I recommend whether no matter what holiday you’re celebrating.

Here’s a run-down of the menu… 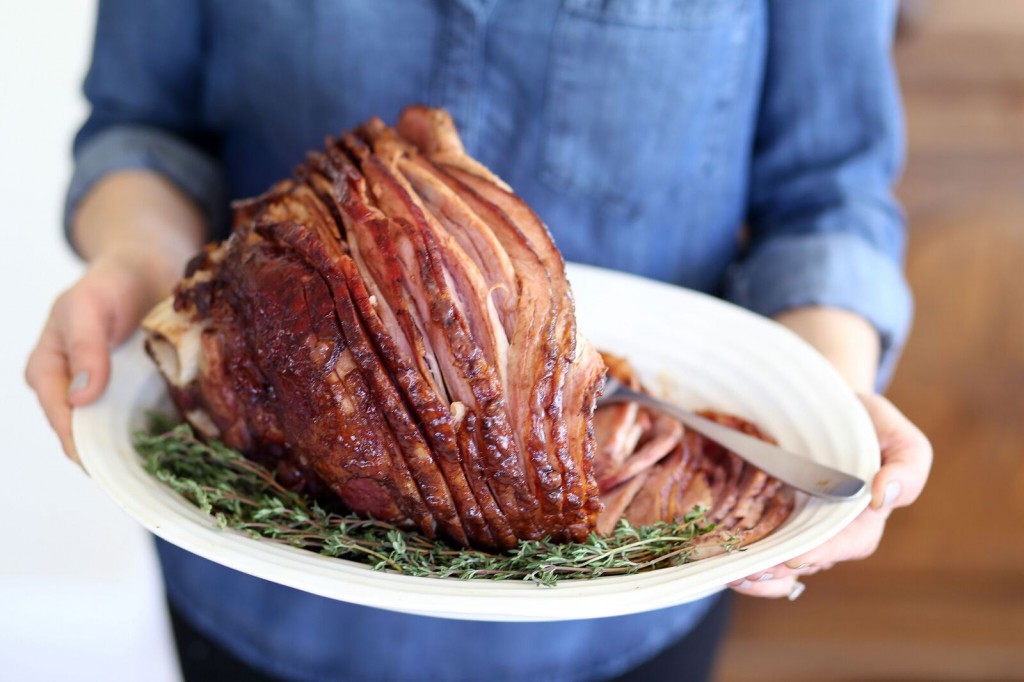 So pretty, right? The spiral hams from Whole Foods Market have no artificial flavors, colors or sweeteners. You order online ahead of time, then pick up at your local store. 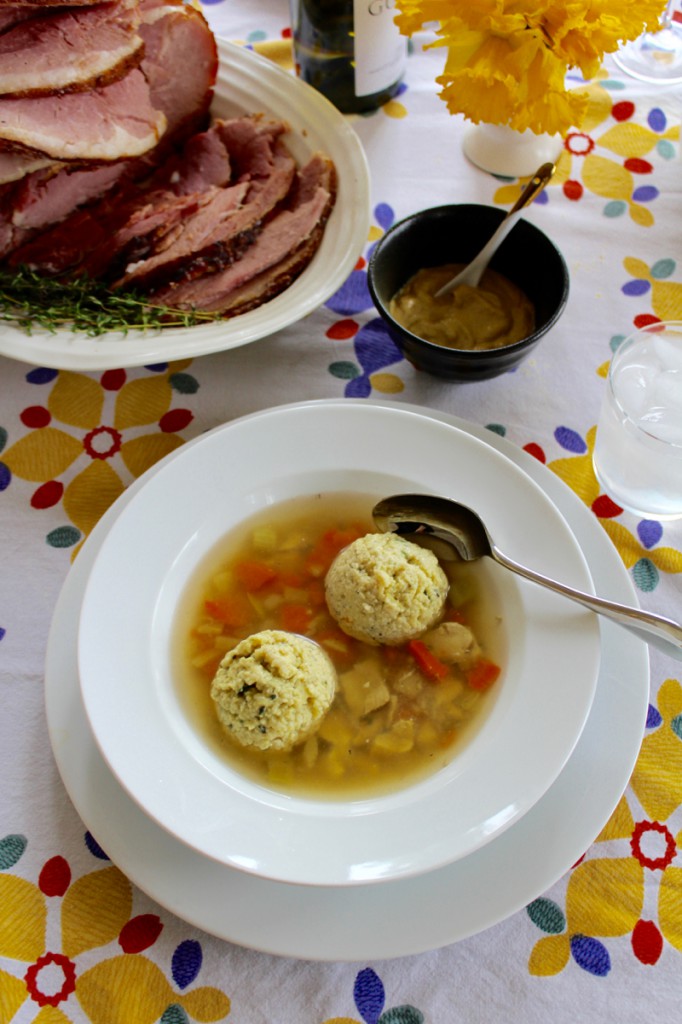 What? You don’t have matzoh ball soup on your Easter table? 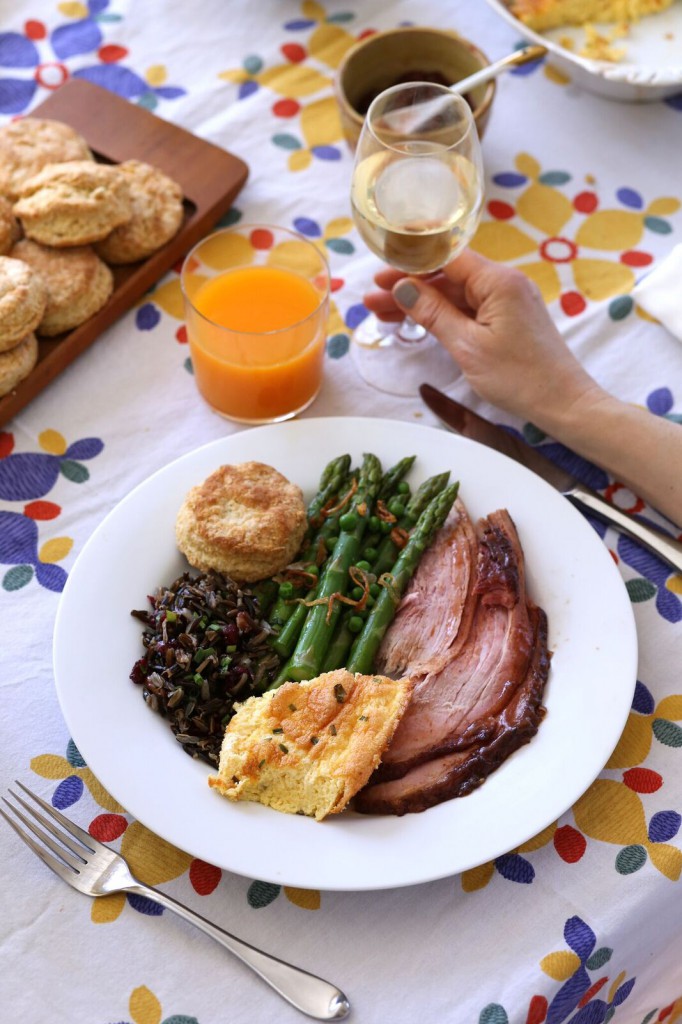 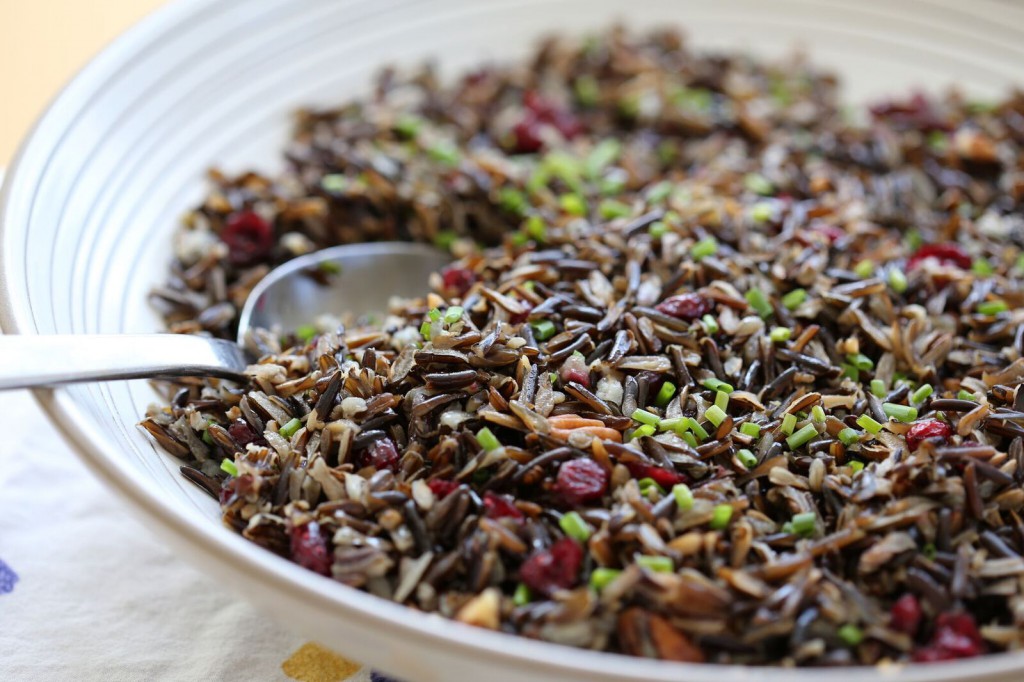 Cook wild rice as directed on package and allow to cool. Toss with remaining ingredients. Serve at room temperature. (Can be made a day ahead of time: Remove from refrigerator an hour or two before eating, and don’t add chives until right before you serve.) 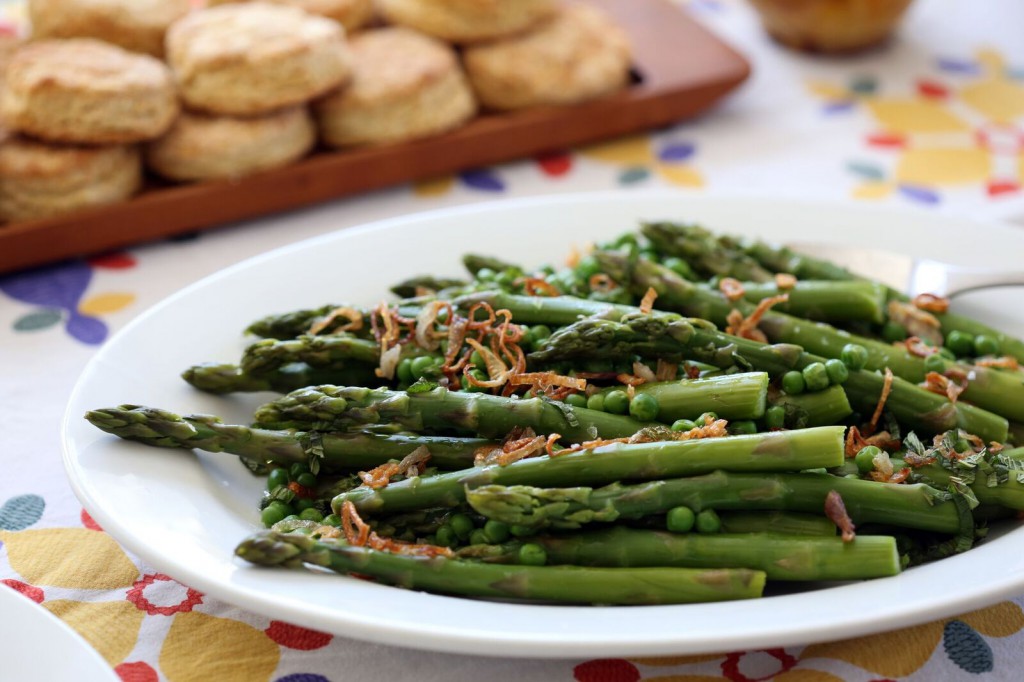 Boil asparagus in a shallow skillet for four minutes, then remove to an ice bath to stop the cooking and preserve its bright green color. Once cool, remove to a platter and pat dry with paper towels.

Meanwhile, fry shallots in vegetable oil over medium heat, watching so they don’t burn, until crispy and golden. Remove with a slotted spoon to a paper towel.

In a bowl, toss asparagus, peas, and mint with vinaigrette. Remove to a platter and top with fried shallots. 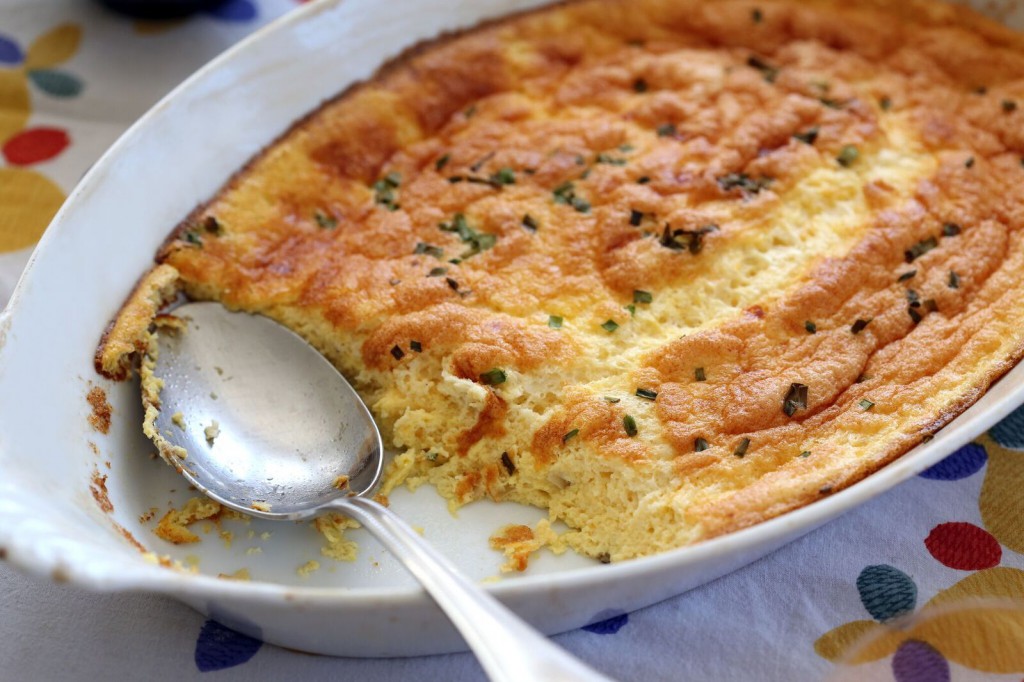 Place a rack in the center of the oven and preheat the oven to 350°F. Butter a baking dish.

Heat oil in a skillet over medium heat. Add onions and cook until soft. Add garlic, cayenne, salt and pepper, and cook another minute. Reduce the heat to low, sprinkle in the flour and stir. Slowly whisk in the milk. Cook, whisking constantly until thick and bubbling. Remove from heat and allow to cool completely.

Separate eggs, placing the yolks in a large bowl and the whites in a mixing bowl or the bowl of a standing mixer fitted with the whisk attachment. Beat yolks until combined, then fold in both cheeses and onion-mixture to the yolks.

Using an electric (or standing) mixer beat the whites on medium speed. When they foam, add the cream of tartar. Continue to beat until soft peaks form. In small batches, carefully fold egg whites into the egg-cheese mixture. Fold just until combined.

Spoon into baking dish. Bake 40 to 45 minutes until golden and puffed and not jiggly. Let cool for 15 minutes. Serve warm. 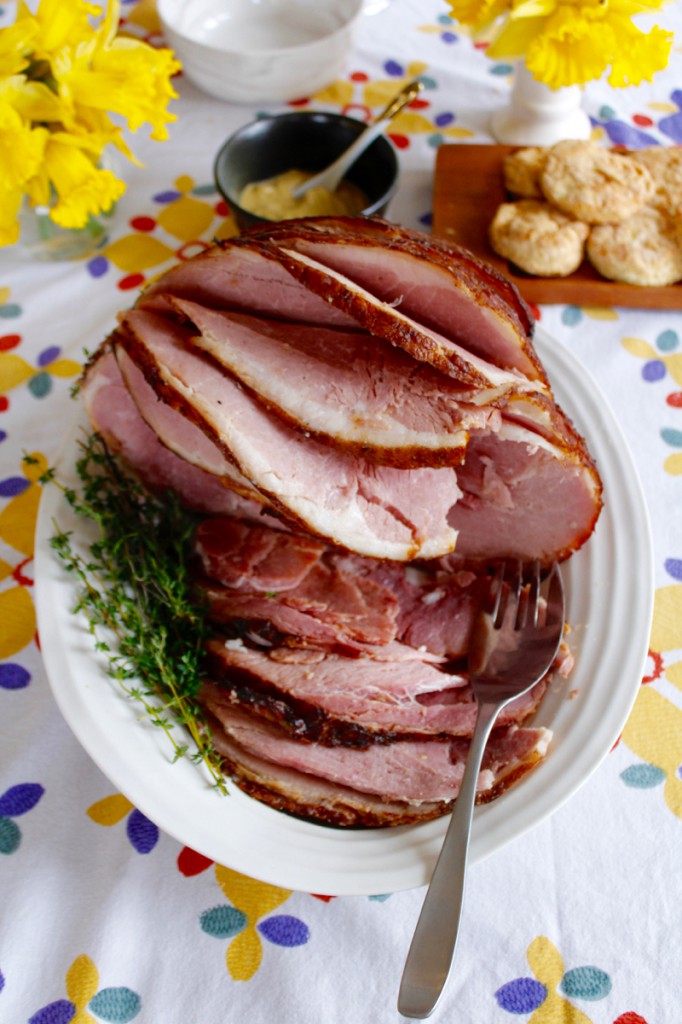 .
It should be a law to serve your ham with biscuits, mustard, and pickles. (See page 197, How to Celebrate Everything for my definitive biscuit recipe.) 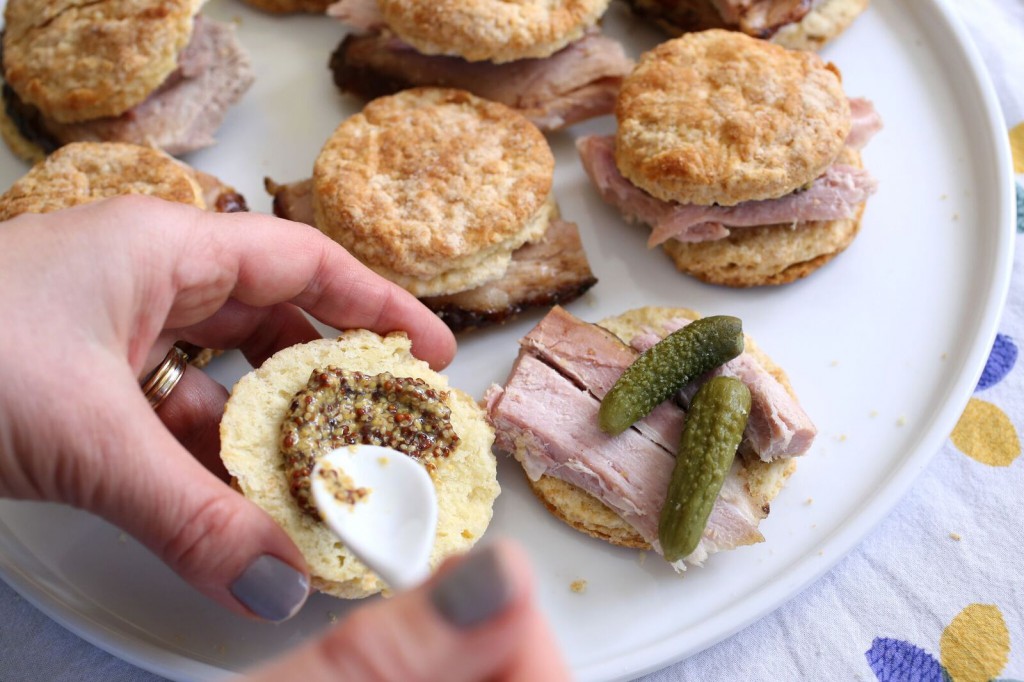 You can prepare a few mini ham sandwiches for the kids to grab. (Bonus: leftovers go right into the week’s lunchbox.) 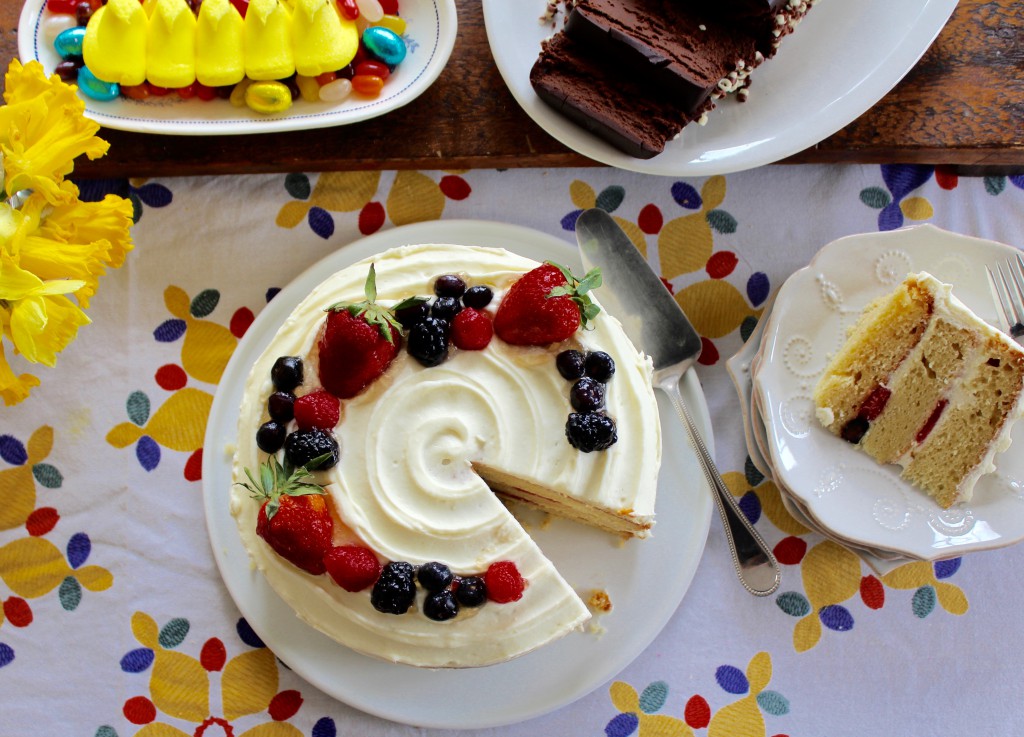 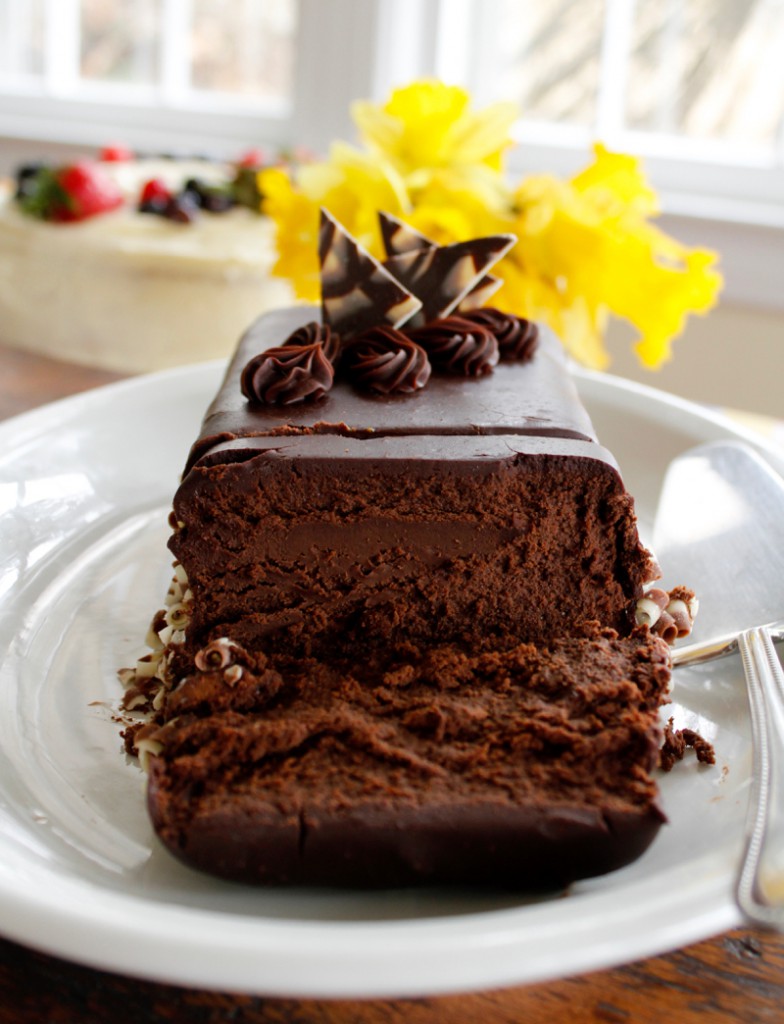 This is a sponsored post written by me on behalf of Whole Foods Market for IZEA. Order their chef-prepared Passover and Easter dishes online then pick up at your local store. (Berry Chantilly Cake is in-store order only.) Parts of this post have been excerpted from my last book, How to Celebrate Everything. Photographs by Doug Schneider for Dinner: A Love Story.

I think you left off the rest of the asparagus recipe!

Sorry about that. All fixed, thanks for the catch!

The Berry Chantilly is cake delicious. So light and creamy. It’s what I always ask my husband to get for my birthday dinner. I like it even more now that I know it has a fancy name.

Yum! And, I love the tablecloth in your photos. Any leads on where I might get one like it?

I enjoyed this post, but felt blindsided by the sudden ad in the middle of it. It would have been less jarring if you’d declared the sponsorship at the top instead of or in addition to the bottom.

I love your blog and enjoyed this post – but felt duped when reading at the end that it is a sponsored post. (Though it seemed strange you suggested a Whole Foods cake.) Suggest that sponsorship should be clearly marked at the TOP, not buried at the bottom. And I hope this isn’t a trend for DALS.

Hi Ellen (and Meesha) – I’ve been writing this blog for seven years and have done several partnerships with brands before and I totally get your reaction. I will say that, like other bloggers who go down this road now and then, I only ever partner with brands I use and trust. (WFM was an easy decision.) Thank you so much for your comments. I am always grateful to hear from you guys on these issues. Happy holidays. PS The ham is INSANE.

Jenny, is the Chocolate Mousse Cake in your newest book? xoxo

OK, that table photo is just so adorable and I am definitely making the asparagus salad for Easter. And where is that awesome tablecloth from?

It’s from John Robshaw from a few years ago. It doesn’t look like they still sell this one, but there are so many other sweet and happy options. Here is the link: https://www.johnrobshaw.com/catalog/category/view/s/tabletop/id/58/

Great post! Just what I needed! Thanks for the yummy side dish recipes. The wild rice will be on our Easter table! Wish we had a Whole Foods close. I want that cake!

Can you please specify what size baking dish (9×13?) to use for the egg gruyere? Thanks!

You’ve completely sold me on that cake – I can’t stop thinking about it and will definitely be bringing one to Easter this year. Do I need to order it or do they have them available in the store? Also, is this something that can be purchased a day ahead or best day of? Thanks!

Thank you for the recommendation for the chantilly cake. We brought it to a dinner party last night and it was excellent. It’s the first time I’ve brought a dessert that everyone liked. We got the 9 inch and it was huge. There were 8 of us. A lot left over. Happy holidays.

Just chiming in about that rice dish – if Grandma Tillie was Orthodox and from Romania, she wouldn’t have had rice on her Passover table. Ashkenazi (Eastern European) Jews eschew not only chametz (leaven) but also legumes during Passover, including rice, beans, corn and soy to name a few. Sephardic (Middle Eastern) Jews however, do eat legumes. You can read about it here: https://en.wikipedia.org/wiki/Kitniyot