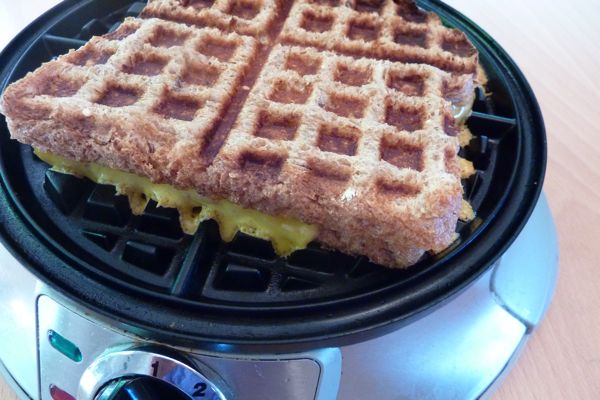 You wouldn’t think that a gooey, melty grilled cheese would be too hard a sell on a kid, right? You also wouldn’t think that a grilled cheese is nutritious enough to warrant Kasparov-ian strategizing from that kid’s parents. But the Phoebe-wants-this-Abby-wants-that routine can wear on me (have I mentioned that each daughter requires her own brand of salsa when served with chips?) especially during something as supposedly simple as a weekend lunch. Why does Abby have to have a peanut butter sandwich and Phoebe have to have a grilled cheese? Why can’t both of them have a grilled cheese? It’s lunch! Why can’t I just make the same thing for both of them? Why? Why? Why? 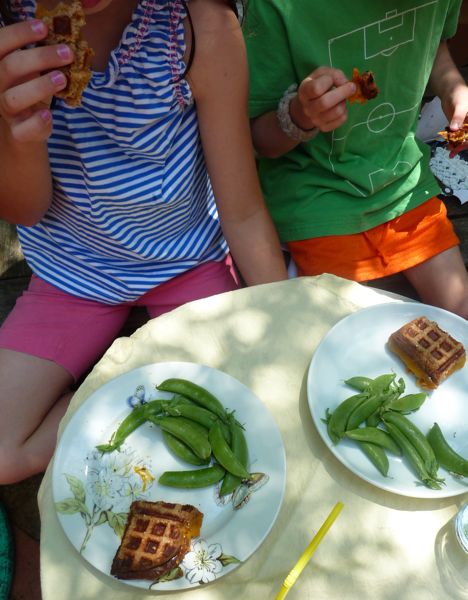 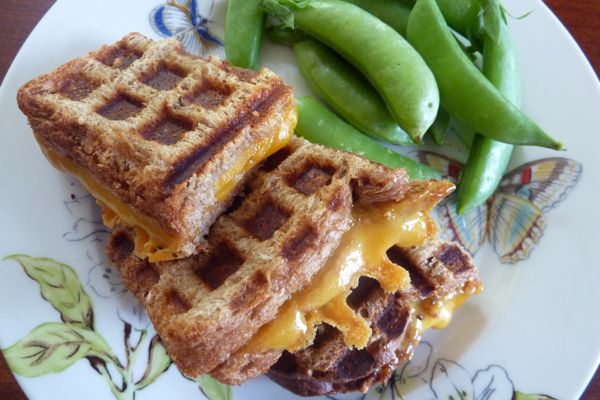 I made these with seven-grain bread and cheddar. You can use any bread you want, as long as the slices aren’t too thick — otherwise you might have difficulty clamping down the waffle iron top. (The top doesn’t have to close completely — you’ll probably have to manually hold it down for a minute or two.) Another tip: butter the outside of the bread before you cook instead of coating the waffle iron with butter or cooking spray. It makes for an evenly crispy toast. To round out the plate, we added a handful of garden peas we picked up at the farmer’s market that morning. The girls like to split open the pods and compete over the number of peas they find inside.

That’s amazing. I have long been confused as to why my 4-year-old would not want a grilled-cheese sandwich. I had no idea that this was universally hard to sell, as you say.

Great idea. Will have to try that for other sandwiches, too.

brilliant. last week, I impressed a friend by cutting a sandwich into triangles.

This is a fun idea and makes me want to pull out the ol’ SnackMaster that my mother gave me in college. It is just a sandwich iron press (I guess the 90s version of a panini press) but it press the bread together, seal the sides and cook the insides of your sandwich. I never got rid of it that thing, but it is in the depths of my garage somewhere.

My son, fortunately, is a grilled cheese lover. But I love hearing about multiple uses for kitchen appliances!

Love, love, love this idea! I have twins and they, like your girls, can never agree on a meal. I am already imagining the many different toppings that work with the waffle iron! Who needs a panini press!

Try that SnackMaster with good (buttered) white bread (like Pullman), a few thin slices of apples, turkey and sharp cheddar. Make sure you “bookend” the sandwich fillings with cheese so the sandwich binds together nicely!

So fun! The part about the salsa was just too funny. We’re like that with salad dressing.

I am thinking about purchasing a waffle iron. Any suggestions?

I’m always amazed how changing the shape of foods makes it more interesting my daughter. Lucky for her, grilled sandwiches tend to abound in our house 🙂

Last night I combined 2 DAL’s ideas. I made your California style turkey burgers for my beef-loving family and then I “waffled” them to make them more appealing. I put each burger between 2 slices of colby-jack cheese and 2 slices of whole grain bread. No one noticed or complained….and they loved the waffleyness! Thanks for the inspiration!

have you seen this?
http://www.waffleizer.com/
you can make a lot of things in a waffle iron! I remember using mine in college as a panini maker with ham, swiss and tomatoes. so good. I need to bring it out again for the kids.

You were not exaggerating, these are delish. Not just my kids loved them 🙂 Also love your suggestion for the teflon-free fry pan. Any suggestions for teflon-free waffle makers? Go Jeffs!!