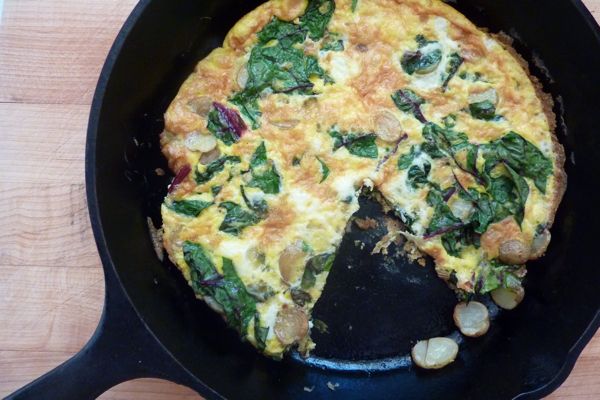 I bought this Lodge pre-seasoned cast iron skillet about seven years ago after writing a story for Real Simple about pots and pans. The 8-inch skillet costs only 17 bucks, is naturally nonstick, moves easily from stovetop to oven, has been the site of untold thousands of pancake and French toast fry-ups, and, not least, is always good for conjuring up images of Ma Ingalls in my 21st-century kitchen.

But what really sold me on the pan were the Use & Care instructions in the pamphlet. I’m paraphrasing: Wash only with hot water. Do not use abrasive sponges or cleansers. You never want to clean a cast iron pan too well. The fat and the flavor left in the pan helps it build a naturally nonstick surface.

Can I tell you how much I love Use & Care instructions that reward laziness? It’s like braising a pork shoulder — the longer you ignore the hunk of meat simmering away in that pot, the more the pork will melt off the bone. And — here’s a leap — dare I say, it’s like summer parenting? Doesn’t too much engagement with the kids, too much cruise-directing, too much kneeling on the floor and playing horsie, too much chauffeuring from camp to camp, too much playdate-planning and organizing and in general too much supermomming make for enabled, dependent, unimaginative children? Well, that’s my story and I’m sticking with it. 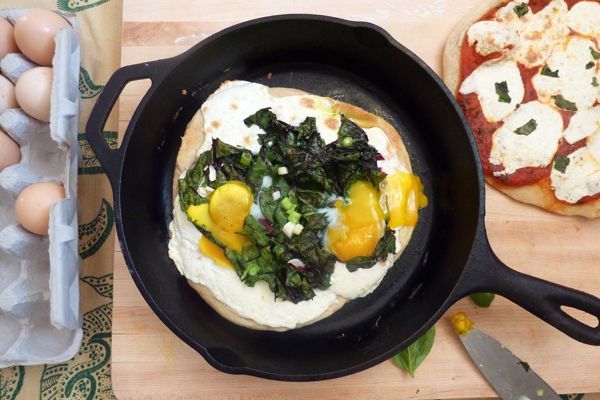 Now for the useful portion of post: What to cook in that cast iron skillet. Last week, I got a CSA shipment (from the awesome and well-priced Farm Share) and inside were a dozen of the yellowy-est, farm-freshy-est eggs sitting on top of an absolute mountain of gorgeous Swiss chard. So that was the formula for the week:

Night one. Pan-fried pizzas. I love making pizzas on the stovetop because in order to fit the crust into the 8-inch skillet, you have split the ball of dough ball in two pieces. This makes it easy to personalize one pizza for the grown-ups and one for the kids. If you don’t have a cast-iron pan, transfer pizza from your skillet to a baking sheet before finishing off in the oven.

1 tablespoon olive oil
1/2 ball of storebought pizza dough (such as Trader Joe’s), rolled out as thinly as possible
About 8 thinly sliced pieces of fresh mozzarella or Italian fontina if you have it (I didn’t)
2-3 cups Swiss chard, washed, chopped, and sauteed in olive oil with minced garlic and red pepper flakes until wilted
2-3 fresh eggs
chopped chives, scallions, or finely minced red onions

Preheat broiler. Add olive oil to a cast iron skillet set on medium heat. Add pizza dough to pan and cook until dough starts to bubble, about 1-2 minutes. Flip and immediately lay down slices of mozzarella and top with chard. Let bottom cook, another minute. Carefully crack eggs on top, being careful not to break the yolks. (I don’t like too much egg-white on mine, so I try to leave some of that in the shell.) Transfer pizza in cast iron pan to oven and broil until cheese is melted and egg is cooked, but still a little runny, about 2 to 3 minutes. Sprinkle onions or chives on top.

For the kids: Marinara Pizza

Preheat broiler. Add olive oil to a cast iron skillet set on medium heat. Add pizza dough to pan and cook until dough starts to bubble, about 1-2 minutes. Flip and immediately spoon sauce (or tomatoes) on top and lay down slices of cheese. Let bottom cook, about one minute. Transfer pizza to the oven and broil until cheese is melted and bubbly. Garnish with basil. 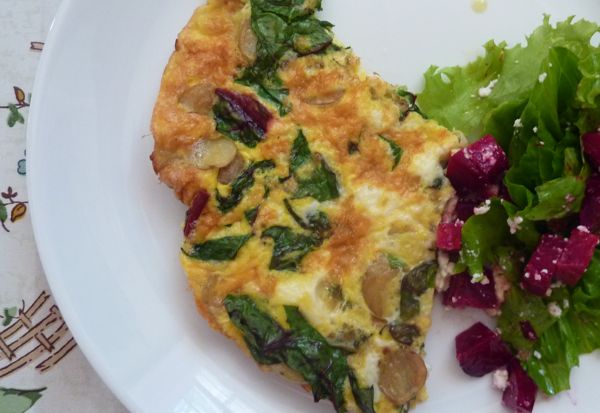 Preheat broiler. In a cast iron (or ovenproof) skillet, heat oil over medium heat. Add garlic, onions, salt and pepper and cook about 1 minute being careful to nestle the garlic in the onions so it doesn’t burn. Add potatoes and cook another 5 minutes until they are crispy and mostly cooked through. Add chard to the pan and stir until leaves wilt. Meanwhile, whisk together eggs, cheese and herbs. Pour eggs into the pan and stir lightly to make sure chard and potatoes are evenly distributed. Let cook without stirring about 2 minutes. Transfer to the oven and broil another minute, until eggs are cooked on top. Cut into pizza-like wedges.

Note: We served with a romaine, beet, and feta salad.

Another Note: If there are extra slices of the frittata, refrigerate in wedges and add to the snack or lunch bag.

yum! i have a total love affair with my cast iron skillet, but i’m really after my mother’s. it belonged to her mother and her mother before her. nothing sticks to that sucker.

I don’t have kids yet; nor do I have a cast iron skillet. I hope to soon have the latter. And I am fairly certain I will take your summer time parenting direction when those said kiddies do enter my life!

We made these pizzas tonight – they were fantastic and so quick and easy. We had everything we needed in the house, which was great. Thanks!!!

I love my cast iron skillet so much! I also make skillet pizza with mine and I think they are a must for cornbread!
I need to be braver with eggs. We have them almost every morning for breakfast, so I never think to use them for dinner. This looks wonderful!
Best,
Tina

I have my own cast iron skillet, which I got a few weeks ago. It was vintage but not pre-seasoned, and one thing I worry about is how to remove those burnt bits of food that sometimes get caked onto the surface of the skillet. Is it just a matter of seasoning and greasing it a lot?

I know I’m a little late to the party here–but I just made this and it’s amazing. So easy, so yummy–would never have thought of this on my own. If this is the only thing you every use your cast iron skillet for (and it won’t be..) it will still be worth buying one. I added a little browned sausage to this but otherwise made as is. Yum yum.

A link to this post was at the bottom of today’s post, and I had to read and then laugh. I can add another notch to the “why I love my cast iron skillet” post: my daughter thinks I’m really cool because of it! What, you say? That needs explanation? Here it is: She’s four and very entranced with the movie “Tangled”. Rapunzel’s security blanket is, of course, a cast iron skillet. When we were watching one day and I said, off handedly, “you know, mommy has a cast iron skillet”, my sweet daughter’s eyes got big and she asked me to see, in disbelief. We are just getting to the sassy age (so soon??!!), so it’s really nice to be cool. All this from the pan that also keeps me in crusty, yummy cornbread and insanely awesome fritattas. What a win-win.

We used small purple potatoes and both of my 4 year olds loved the fritatta dinner. Because they were pizza shaped, they called them pizzas and ate them up. The purple color made them extra beautiful.