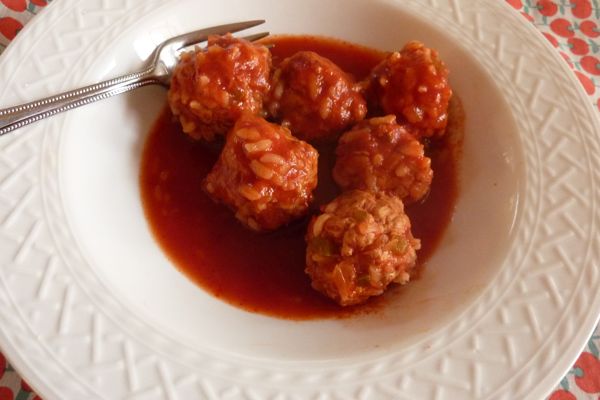 The recipe for these sweet, braised meatballs is written on a notecard with company letterhead from Andy’s first job. It’s written in shorthand — I can picture him in his beige, cookie-cutter cubicle fifteen years ago, scribbling down the instructions as his mom dictated the exact amounts of peppers, onions, and beef over the phone… her standing in his childhood kitchen 250 miles away. He claims to have eaten porcupines — so named for the spikey effect of cooked rice inside them — no less than once every three weeks from 1977 to 1989 and they were such a staple in his house that it was one of the half dozen recipes sent to me via snail mail from his mother right after we were married. (Which I subsequently misplaced, hence the call.) Now in our 21st-century home, we seem to be continuing the streak. Though we usually make porcupines with ground turkey instead of ground beef. And afterwards, the kids get to watch a little youtube video on the laptop instead heading down to the rec room for an Asteroid marathon on the Atari. But no matter what decade, it’s an awesome Sunday dinner. 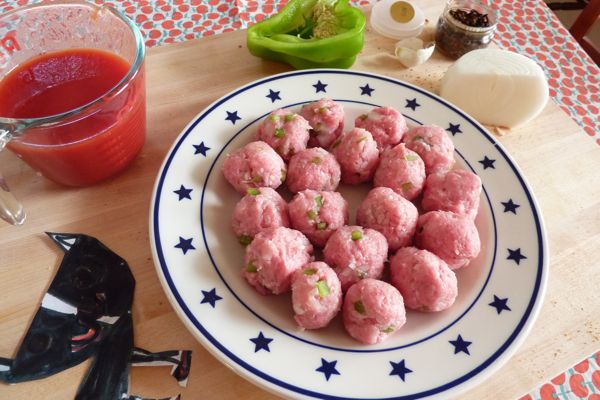 Porcupine Meatballs, ca. 1977
Unless you are under four feet tall, you will probably need something acidic (a green salad with vinegary dressing) to cut the sweetness of the braising liquid.

Whisk together remaining ingredients in a deep skillet and bring to a simmer. Drop in meatballs and cover tightly. Simmer for 30 minutes, flipping over about half way through.

I really love your blog!! great post. I might just try this recipe next week. The name alone will thrill the kids.

I love the addition of cinnamon to this! Someone once told me that I should simmer a cinnamon stick in my bolognese for great flavour. I’ve done it since and never looked back and I can see here that cinnamon and ground beef have obviously paired together for quite a while (and here I was thinking I was on to something new and inventive!).

It’s been a long time since I’ve made “Porkies” — I think I’ll whip up a batch for Papa this week. Thanks for the inspiration.

Crazy question: should the rice be cooked first? :0

Kristin – Not a crazy question. I should have made more clear. Rice should be UNCOOKED when mixed into the meat. It cooks in the braising liquid.

you can probably tell that i need a lot of help in the cooking department…. 🙂

oops! I actually cooked it first and it worked out ok…..i used brown rice. 🙂 Thanks for not making me feel silly!!

and, btw, it was sooo yummy! (especially the leftovers!)

Thanks! We all enjoyed this recipe. I let the 3-year-old help make the meatballs and we had some funny shaped porkupines! But they were all tasty and will be served again soon, I’m sure.

Thank you for being the first person to point this out to me, in like, 1998:

Truer words were never spoken. DALS reminds us of this every day.

So fun to find! I grew up on similar-looking porcupine meatballs, however the recipe is different than yours (and dates back to my great g’ma, who was born just before 1900 I think). She used home-canned tomato soup (without the milk added) that was flavored with celery and peppers for the cooking sauce. Her recipe has you brown the meatballs in a skillet before adding the sauce, which leaves the end-product sauce sort of like tomato gravy.
My mom revised the recipe to replace the labor-intensive home-canned soup with one can of Campbell’s (healthy request) and a can of fat free beef gravy, and she broils the meatballs to let as much grease as possible leave the balls (hence why the gravy is needed).
Being afraid of the fat free beef gravy’s ingredients, and not a big fan of Cambell’s, I plan to try it this week (’tis the season!) with a box of tomato soup from Trader Joe’s and one of their boxes of turkey gravy (seasonal). I’ll use half ground turkey & half beef for the meatballs.
And for Kristin – I use uncooked brown rice, but you do have to cook the meatballs a little longer.

Sheesh ! The last line of the recipe, I read “remove CLOTHES before serving.“ That would certainly make for a special dinner! Thanks for posting this recipe. My Granny, who raised me, used to make these as appetizers at parties and they were always a big hit.

We ate “Porcupines” quite regularly when I was growing up in teh 1980s and 1990s. My mom’s recipe wasn’t sweet, though. It involved tomato sauce and worcestershire sauce and we always at it w/corn and scali bread. Yummy. Then we’d hit up the Nintendo.

My grandma’s porcupines that have been passed down is way different than most of these. The meatballs are mostly the same with ground beef, onions and rice…but we make our sauce using cream of mushroom soup and sour cream. Then lay the yummy meatballs and creamy sauce on a bed of chow mein noodles! Now that’s a spiny little porcupine!!! DEEE-LISH!

I made this recently, but like some others, my recipe is much different. I used a can of cream of mushroom soup with a can of milk and simmered for 30 minutes, and served them over egg noodles. My grandfather used to make them for my mom and her sisters growing up, and I of course grew up on them as well. Comfort food doesn’t get better than this, in my opinion.

Hi Jenny!
I just bought your cookbook and I LOVE it. In fact, I mentioned it the other day on my blog and referenced “tiny table terrorists” 🙂 One question, I made this for supper tonight and had some problems with getting the rice to fully cook. Do you use regular white rice or do you use instant rice? The flavor was great, everyone loved them.

I’ve been meaning to try these for a while and just got some kitchen inspiration while preparing food to freeze for upcoming meals. I love having my DALS book nearby for ideas!
I just prepped some of these and put them in the freezer (raw). I’m crossing my fingers that they’ll defrost and be a delicious addition to my dinner repertoire 🙂 Any tips, just in case?

Just tried this recipe, and a miracle occured. Three girls ate dinner with no complaints. They all ate! Thank you! Am reading your book now and I love it.

Got the DALS book out of the library and this is the first recipe I tried. DH and I gave it a B (though we think there may have been implementation errors). The kids (ages 9 & 10) gave it a C, mostly for texture so mainly ate the sides after their “trying bites.”

What kind of rice do you typically use? We tried these with “converted” AKA Uncle Ben’s Rice and they took longer to cook and my kids didn’t like because the rice was too hard. Would a softer rice like Jasmine rice work better?

My mother used to make “porcupines” all the time growing up. They were a family favorite. I make them about once a month. I use white Minute Rice and spaghetti sauce instead of tomato juice, and I add chopped onion & green pepper as well as Italian seasoning. I don’t use garlic, cinnamon or Worcestershire sauce in mine. I’m sure there are many variations!

I made these last night using regular white rice (mahatma brand), but the rice was a bit crunchy. what’s the trick here? I did get a terrific unintended consequence: my 1st grader, who doesn’t like food in general, picked up a chopped green pepper, bit into and said, “yum”. holy porcupine!!! he ate 4 of them, which means this is going into the regular rotation, as soon as i figure out how to uncrunch the rice!

My kids were totally skeptical when they saw these on their plates, but they ended up really enjoying them. The recipe also doubled nicely. Thanks!

Do you suppose this could be done in a slow cooker?

I am wondering what type of rice to use… normal long grain white? instant?

I saw that some other people had asked but I didn’t see any replies.

We’ve been making this for close to a decade now, ever since I bought your first book. When I asked my 18-year-old son what he wanted on the menu this week, his answer was “We haven’t had porcupine meatballs in forever”! So easy and tasty. Plus they are a “fun” food for kids. Thank you for sharing your family favorite with my family, where it is now one of OUR favorites as well!