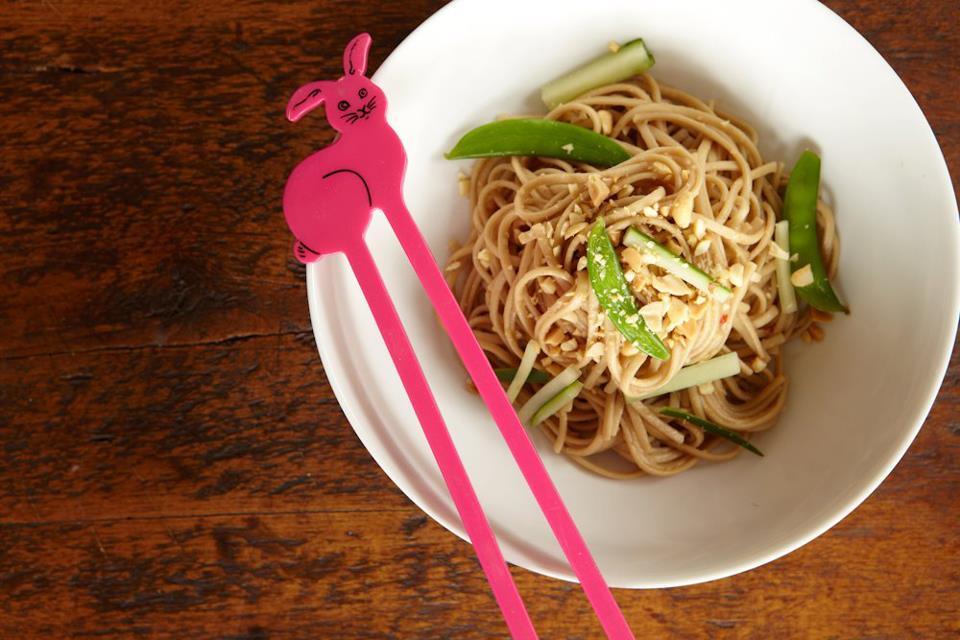 I know better than to apply logic to the process of feeding kids, but there I was doing exactly that a few weeks ago when I spied the perfect recipe for sesame noodles (aka peanut butter, spaghetti, sesame, etc.) by my friend and mother-of-two Melissa Roberts.  The logic went as follows:

How long have I been in this parenting business? Long enough to know that the surer you are about something, the greater the likelihood of failure.

I think my six-year-old, sensing my peanut butter-fueled swagger, figured out that she could really twist the knife if she rejected the sesame noodles (which were delicious). And so I never really had a chance. Here’s what really kills me: She orders the dish at Chinese restaurants as a matter of course and this homemade version was definitely almost as satisfying! Which she would have found out had she deigned to take a bite. My only consolation was that I was able to use the sauce to approximate an appetizer which I used to order at my favorite midtown Japanese sushi restaurant (RIP Expense Account)…goma ae, a steamed spinach with sesame paste. My other daughter likes both peanut butter and spinach but, well, you can probably guess how that one turned out. 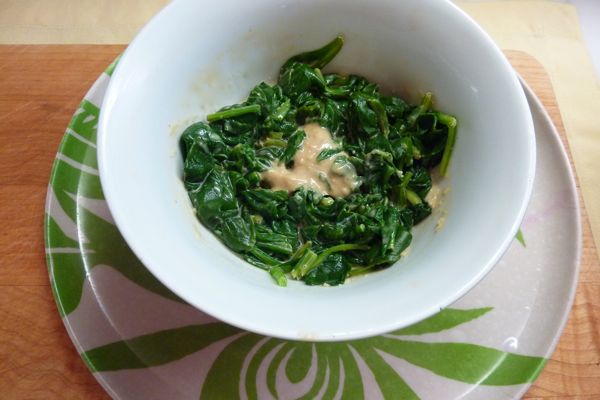 “Peanut Butter Sauce” for Sesame Noodles or Spinach
Melissa says it’s crucial to use smooth peanut butter like Skippy or Jif, but I used all-natural and it turned out fine.

Toss with a pound of cooked and cooled udon noodles or spaghetti, and top with any combo of the following: chopped peanuts, sliced sugar snap peas, chopped cucumbers, or steamed spinach (about 8 to 10 ounces)

Steam or saute fresh spinach leaves as you normally would. Scoop into small bowls and chop with kitchen scissors. Toss with a few spoonfuls of sesame sauce.

My kiddo loves chicken satay with noodles. I throw on the chopped peanuts, shredded carrot and cilantro. (He also rocks those chopsticks, but he has the lion. He loves them!)
Here’s where I admit that I have been afraid to make my own peanut sauce! I have been buying the bottled version. (I know…that’s bad) I will try this one and be brave….
Do you know if I can make extra and store it? It’s so convenient to have a bottle in the refrigerator….

My daughter is required to take a trial bite of any new food we give her (as are we, which is fun when she plays chemist in the kitchen). If she doesn’t like it, she doesn’t have to eat it… but unless she tries it she doesn’t get anything else.

Also, we leave the rejected new food on or near her plate… just in case her initial reticence gives way (and she’s too proud to admit she was wrong).

Tina – I’m not sure you can store it, but while I haven’t tried this recipe, it’s really really easy to make your own sauce when you need it (the “recipe” I use takes much less time than boiling the water for the noodles) – and I’d bet anything that freshly made sauce tastes as good if not better than the kind in the jar!

My son (age 2) usually loves peanut noodles with sesame seeds on them (but nothing else, no carrots, cilantro, etc). I make them with soba noodles, and I used regular wheat noodles the last time (feeling cocky since he loves noodles of all kind) and he rejected them out of hand. Sigh.

Ivy – if you read this, I’m curious about how old your daughter is? I’m trying to figure out when to start pushing a “trial bite” without creating food struggle issues. Thanks!

alas, peanut butter has won them over….always!
i just shared my favorite spicy thai recipe w/a peanut dipping sauce last week!
WHICH i adapted and made a less-spicy version of, for my lovelies (our little ones).
check it out,
and I will try to get a hold of a pair [or 3] of those chop sticks!

logic is COMPLETELY applicable when you find the opportunity to apply it!
and peanut butter + dinner time is definitely one of those opportunities!

ohmy god, you’re genius! you figured it out! i’m making this asap. also, do you have a secret supplier of your adorable textile backdrops? each is cuter than the last.

Sal – no secret supplier. Just a bunch of fabric scraps from garment district. And a few from Aunt Patty, of course. Can you believe I cracked the Sushiden spinach code???

you toooootally cracked it! a real humanitarian effort, if you ask me.

I tried it and it was a huge success – but i used agave syrup instead of the sugar – i am trying to avoid refined sugar/simple carbs in our diet – it came out great. I just used a drop as it is sweeter than sugar.

that’s great margaret! so I assume you went with natural pb?

Just have to share this (four-year-old) endorsement:
“Mama, can you give me the recipe for this, so I can make it when I’m a grown up?”
Tuesday night victory!

Oi, so true, so true. The greater my certainty and excitement for a dish the more likely the kid is to ignore it. Will I ever learn???

Looks delicious, but… here is an allergy substitution challenge: how to make something in this ballpark without peanuts or anything sesame? I am thinking of sunflower seed (or almond?) butter and canola oil instead of sesame. Has anyone tried this? Any advice for more flavor?

And since I posted elsewhere *just* to say “Do I win the GetMaineLobster.com feast?”, I have to post here because this is BY FAR the most-used, most-shared recipe from your site. Simple and delicious and my kids love it. Also, tossing white beans into tomato soup has been something I seem to have internalized. 🙂

I have been craving comfort food, which includes peanut butter. I am inspired to try the listing of 7 meals for the week, this recipe is one of my 7. I am a newsletter subscriber. Do I win the Lodge cast iron skillet?

I make this peanut butter sauce ALL the time! Thank you for sharing it. Keep on blogging. 🙂

This sauce is everything. EVERYTHING. I added a little lime juice at the end and sambal paste instead of chile flakes. My two teen sons insist on meat at every meal and I’m trying to break them of this unhealthy, unsustainable habit. I made tofu rice bowls with lots of fun toppings. They scoffed at this until they started on the sauce. And then they didn’t stop. I doubled the recipe and was left with just enough for my lunch today.